The Strategic Implications for India as US Pushes for Oil Price Cap, More Output

India requires five million barrels of oil per day, and so, it must continue to look out for the best discounted deals it can get, as per prevailing global rules. 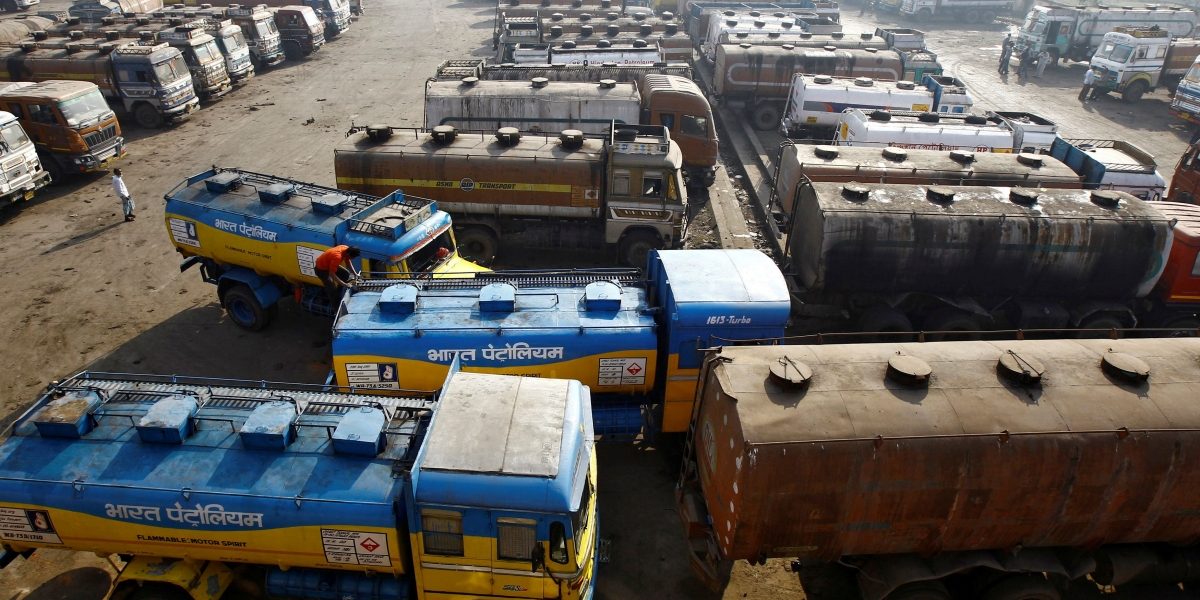 Oil tankers are seen parked at a yard outside a fuel depot on the outskirts of Kolkata February 3, 2015. Photo: Reuters/Rupak De Chowdhuri

After the pandemic, which roiled commodity markets, the oil market staged a remarkable recovery. Following a growth of around 5.7 million barrels per day (bpd) in 2021, demand was on a course to exceed pre-pandemic volumes and average more than 100 million bpd for 2022. But the second quarter of 2022 has been hit by geopolitical tensions and mounting economic pressures, a surge in inflation, and global supply chain gridlock.

The Russia-Ukraine war continues to intensify with no signs of de-escalation. Inflation continues to be at multi-decadal highs across many economies globally, raising the spectre of a recession in some parts of the world. This week crude prices fell more than 3% with both Brent and WTI crude currently trading at sub-$100/bbl. In the midst of weaker demand for energy, the American priority is lower gas and oil prices and increased OPEC Plus output.

In order to limit Russia’s oil revenues, and to prevent an economically catastrophic increase in oil prices as European sanctions against Russia are set to take effect at the end of this year, the US also wants to put a cap on Russia’s oil prices between $40 and about $60 a barrel. US treasury secretary Janet Yellen has been touring Asian capitals to convince leaders about the idea of a ‘buyers cartel’ that should aim to cap the price of oil to limit how much refiners and traders can pay for Russian crude.

Prior to that, US President Joe Biden visited Saudi Arabia seeking assurances of more production from major oil producers in the Middle East in order to ease gasoline prices. The 31st Organisation of the Petroleum Exporting Countries (OPEC) Plus Ministerial Meeting held via video conference on August 3, 2022 approved a small increase in production, basically keeping oil output unchanged for September, in spite of calls from the US for more supply. OPEC Plus, which has Russia as a co-chair, has decided to increase production by 100,000 barrels a day in September, far less than the nearly 650,000 barrels a day that the group agreed to add in July and August.

According to the New York Times, “politically, the paltry increase in output – less than one-tenth of 1% of global oil demand, the smallest boost in memory — would appear to be a snub of Mr. Biden.”

More significantly, the group of oil producers underscored that Russia’s membership in OPEC Plus is vital for the success of the agreement. His Excellency Haitham Al Ghais of Kuwait, who took office as secretary general of the OPEC on August 1, stressed that the organisation is not in competition with Russia, calling it “a big, main and highly influential player in the world energy map.”

Since the war in Ukraine, information about transactions in Russia’s barrels has become less visible. What’s crucial is that the surge in international oil prices climbing to 14-year highs (above $130/bbl last in 2009) has rendered Western sanctions ineffective, softening the blow to Russia, and hence the desperate plan to cap prices. The proposal is to set the price at a level above Russian production costs, so as to provide an incentive for the Kremlin to keep pumping, but much below the current high market prices.

At the G7 summit in Germany, leaders agreed to have a price-capping mechanism on Russian oil exports in place by December 5, when European Union (EU) sanctions banning seaborne imports of Russian crude come into force. But most energy experts believe the proposition to be entirely ‘ridiculous’ which could push oil to over $140. According to Jorge Montepeque, credited with reforming some of the most important benchmarks for pricing oil, the history of similar attempts to limit the price suggests that a cap would lead to higher, not lower prices, and to the emergence of a grey market for Russian oil. In fact, with a shortage of energy and food, indications are that the EU might ease sanctions on Russia.

Even if the US and its G7 partners are able to prevail over India and other top importers to a price cap on Russian oil, market forces would quickly undermine such a stratagem. Russia is pushing all the crude oil that it can on to the global markets. Head of crude market analysis at Kpler, Viktor Katona, said that India has become the key market outlet for Russian crude. Data from Kpler shows that India’s imports of Russian oil hit a record in May with over 8.40 lakh barrels imported per day. Month-on-month data reveals an increase of 20% to one million barrels per day in June.

Also read: What a Potential US Recession Will Mean for the Indian Economy

India requires five million barrels of oil per day, and so, it must continue to look out for the best discounted deals it can get, as per prevailing global rules. When the Trump administration had asked India to reduce its imports from Iran and Venezuela, India had agreed and reduced those heavily discounted imports to zero. And, it had shifted that demand to US oil, which was not discounted and more expensive, in order to respect her relationship with the US. However, now there are reports of the US dealing again with Venezuela for oil, which we will surely be requested to buy.

Such strategic shifts in global trade cannot be done every four to five years. There are efforts to revive the 2015 nuclear deal with Tehran that will lift sanctions on its oil exports, and more importantly, put a stop to the illicit Iranian sales. China’s purchases of Iranian oil have risen phenomenally, which would mean less supply will be available to Tehran’s previous buyers like Indian and European refiners, if the sanctions are removed.

Given that the US has been unable to convince OPEC to increase production, Iran and Venezuela are yet to enter the oil export market and US exports are expected to be under pressure, where will India get its oil?

Western sanctions are not endorsed by the UN or any other multilateral body, so India is free to deal with Russia on energy. There are no sanctions on Russian oil and gas exports to the EU, and the US did not even sanction Sberbank and Gazprombank, (barring some executives of the banks), which are the key transactors for energy. Further, the US has clearly stated that India does not violate its sanctions if it deals with Russia on this count, albeit it has faced considerable censure for continuing to buy from Russia.

India has significant investments in Russian energy and that relationship should continue. It buys Russian oil, runs it through its refineries, and sells ‘Indian refined products’ to the EU. The US needs to consider Indian interests as its own and assist India in building long-term energy relations. This would go a long way in India supporting the West in its resolve to strengthen freedoms and democracy.

Oil prices could rise further if India avoids buying Russian oil and this could hasten the onset of a recession or worse, a stagflation. Be it Russia, the US or OPEC, India should maintain a diverse mix of suppliers in the interest of its energy security.