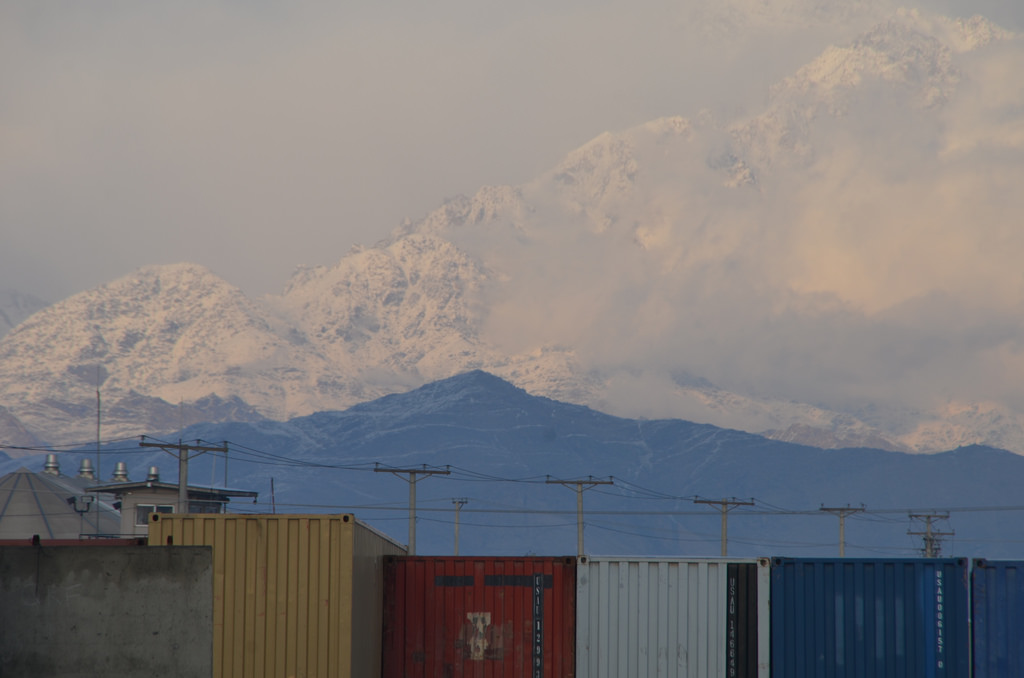 The Hindu Kush mountains as seen in northern Afghanistan. Credit: 401stafsb/Flickr, CC BY 2.0

Kathmandu: Joining hands in disaster management and economic development, and leveraging water and energy as the entry points to promote regional cooperation, is vital for a sustainable and productive future for the vulnerable Hindu Kush Himalayas (HKH). This comes from experts who think the region is already experiencing the effects of climate change.

Sensing that “mountain characteristics such as inaccessibility, fragility, and marginality require specific solutions for resilience building that address socio-economic and environmental challenges in the mountain setting”, they’ve drawn up a 12-point agenda for the HKH to remain a resilient region. The agenda draws specific attention to the lack of knowledge from eight countries affected by the environment of the HKH region.

It was subsequently adopted at the International Centre for Integrated Mountain Development’s (ICIMOD’s) recent ‘Resilient Hindu Kush Himalayas’ conference. One of the gathering’s conclusions was a prediction – that if the temperature increased by 2º C or more in the HKH region by the end of the century, it will precipitate substantially decrease the amount of snowfall and hike melt rates by at least 33%. And this statement against the backdrop of a world already struggling to keep average global surface temperature rise to 1.5º C.

The experts added that the common but differentiated responsibilities and respective capabilities (CBDRC) vis à vis a rapidly warming Himalayan region can be the common platform for proactive action.

At the conference, about 200 scientists and stakeholders from the eight HKH countries – Afghanistan, Pakistan, India, Nepal, Tibet (China), Bhutan, Bangladesh and Myanmar – and a few from the developed world held brainstorming sessions.

According to Neera Pradhan of ICIMOD, “Facilitating cooperation and policy coherence among the countries sharing HKH resources is a persistent challenge in a region that is prone to conflict and is highly variable regarding development.” At the same time, Pradhan showcased the India-Nepal Kosi basin experience, where hydrological data was shared well in time to for an eight-hour early warning to be issued downstream in August 2017. The act served to prevent any major damage.

Discussions on transboundary endeavours on the energy front focused on decentralised and renewable options like biomass conversion, biogas, wind/solar power and micro-hydro power.

R.A.M. Obaidul Muktadir Chowdhury, a Bangladeshi legislator, said, “Nearly 31% of the people in the HKH region are food insecure. Another 50% face malnutrition, with women and children being affected the most. Achieving food security is fundamental to meeting other” sustainable development goals.

The Intergovernmental Panel on Climate Change (IPCC) publishes ‘Assessment Reports’ (AR) from time to time, each providing a review of what we and don’t know of the science of climate change. However, even as far as the fifth AR, or AR5, released in 2014 is concerned, there’s a hole where data from the HKH region needs to be thanks to the absence of long-term monitoring.

“The HKH region can ill-afford this data gap as 10 important rivers originating from this region and their tributaries together support almost 40% of South Asia’s population,” said Dhrupad Choudhury, a regional programme manager at ICIMOD and one of the authors of the report. The HIMAP’s ‘Comprehensive Assessment of the Hindu Kush Himalayan Region’ report aims to bridge this gap.”

Qamar-ur-Zaman Chaudhry, a former director-general of the Pakistan Meteorological Department, said, “Despite the fact that the 2021 National Climate Change Policy of Pakistan included widespread consultation at the district level, only 8% of the provincial budget was allocated for climate change related matters.”

Over 70% of the water Pakistan uses comes from the HKH region but, Chaudhry continued, the country’s institutions continue to remain weak. This is also one of the 12 points of the agenda that was adopted.

Brij Mohan Rathore, a former official with the Government of India, suggested the ‘policy window’ had to be tapped at this opportune time. Rathore, now a senior policy adviser with ICIMOD, gave the example of India’s Forest Rights Act of 2006, whereby a select stakeholders group was involved in discussing the ownership of forests.

“There was a change of government at the Centre in 2004 that encouraged stakeholders to tap the window of opportunity. The result was a good piece of legislation – the FRA 2006 Act,” Rathore said. “But when it comes to translating policy into practice, there are still problems at the implementation and institutional levels.”

Sonam Wangchuk, an educationist-entrepreneur from Ladakh known for his installation of the ice stupas to store ice in winter for use in summers, pushed his preferred method. “First, make education as the launching pad for finding solutions for people’s problems. This will make young entrepreneurs. Then, get the people and community involved so much so that the government is compelled to scale up its solutions and incorporate those into policy,” he suggested.

The HKH provides water, livelihood and access to a unique ecosystem to more than 210 million people and water to more than 1.3 billion, almost a fifth of the world’s population, living in downstream river basins. The idea was to underscore the fact that mountain characteristics like inaccessibility, fragility, and marginality necessitate special solutions to build resilience against climate change while also addressing socio-economic and environmental challenges.

ICIMOD also acknowledged that meeting the Sustainable Development Goals targets was important. In 2015, 194 members of the UN agreed on these targets – a set of milestones and a roadmap for eradicating poverty and hunger and tackling climate change by 2030.

Nivedita Khandekar is an independent journalist based in Delhi. She writes on environmental and developmental issues. She can be reached at nivedita_him@rediffmail.com and on Twitter at @nivedita_Him.