With IIT Kharagpur Calendar, the Hindutva Right Takes Another Step Away From Science

The calendar, dedicated to the newly-founded Centre of Excellence in Indian Knowledge System on the IIT Kharagpur campus, attempts to preach cultural triumphalism by claiming that the Aryan race was indigenous to India. 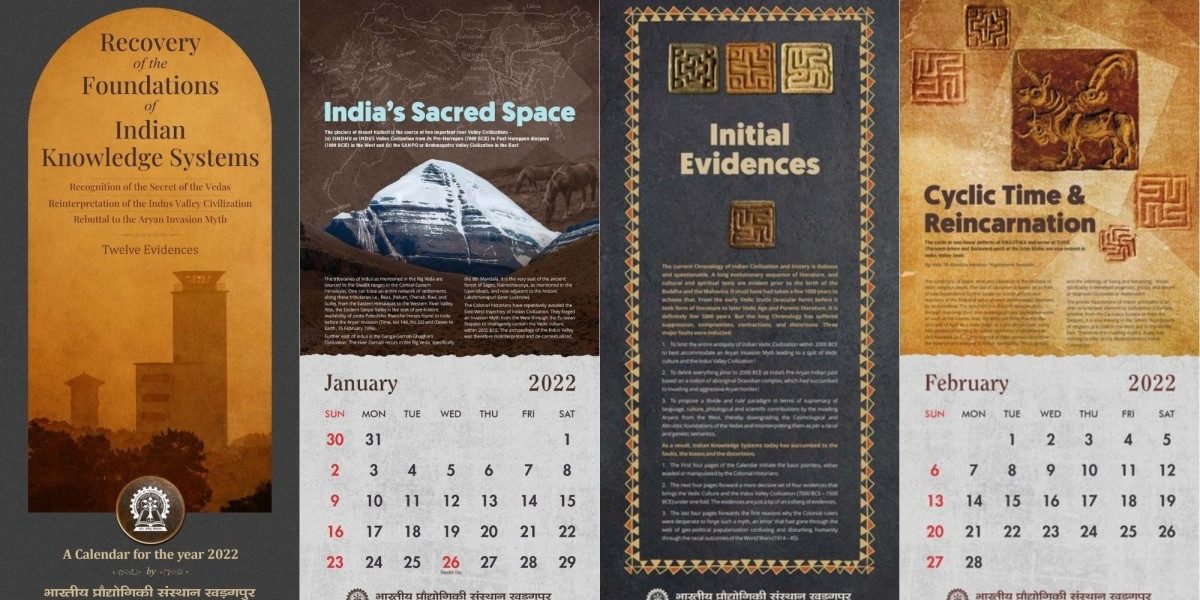 Four of the 18 pages of the calendar published by IIT Kharagpur. Photo: Twitter/ChamuKShastry

Kolkata: The 2022 calendar published by the Indian Institute of Technology (IIT), Kharagpur which claimed to decisively prove false the widely-accepted ‘Aryan invasion theory’ is being accused  of trying to pass conjecture off as science in order to suit the narrative of India’s ruling forces, the Hindutva nationalist Bharatiya Janata Party (BJP) and its parent organisation, the Rashtriya Swayamsevak Sangh (RSS).

The calendar’s claim that the India’s Vedic culture is indigenous is a tall one which runs contrary to the present dominant scientific and historical understanding that Aryans migrated to India from Central Asia and brought the Vedic culture with them, introducing it to the aboriginals, predominantly the darker-skinned Dravidian race. Proponents of the latter consider the Harappa-Mohenjo-daro civilisations to have predated the Vedic era. But this calendar claims that there is enough evidence to bring the Vedic Culture and the Indus Valley Civilisation (7000 BCE – 1500 BCE) under one fold.

This calendar comes amidst the backdrop of the ongoing controversy surrounding the BJP-led Union government’s attempts to rewrite India’s history textbooks and allegedly “saffronise” education. The BJP and RSS, like the claims made in the calendar, consider the Aryans to have been indigenous to India and long opposed the dominant ‘Aryan invasion’ theory. However, no credible scientific publication has, as of now, proved that Aryans were aboriginals in India.

“Colonial historians have repetitively avoided the East-West trajectory of Indian civilisation. They forged an invasion myth from the West through the Eurasian Steppes to intelligently contain the Vedic culture within 2000 BCE. The archaeology of the Indus Valley was therefore misinterpreted and de-contextualised,” the calendar claims.

The main debate around this dominant Aryan migration theory has been that it says India had its own culture and civilisation before the Aryans migrated from the west and introduced the Sanskrit-based Vedic social system, whereas the Hindu right wing has claimed that the creators of the Vedas always belonged to India.

This also forms the basis for the right wing’s contention that Muslims and Christians are ‘invader’ races with respect to India, as opposed to the supposedly indigenous Aryans. It is because of their theory of aboriginal Aryans that they do not call India’s tribal population as Adivasis, which literally means original residents, and describe them as Vanvasi, or forest-dwellers.

Moreover, this is why they do not call India’s tribal population ‘Adivasis’ but rather, Vanvasis (literally forest dwellers).

The 18-page calendar has 12 pages, one for each month, to present 12 pieces of ‘evidence’, – which many scholars would more aptly call ‘arguments’ – four to explain contexts besides having a cover page and one page of official details. The cover page is titled ‘Recovery of the foundations of the Indian Knowledge Systems’ and has three highlights: ‘Recognition of the Secret of the Vedas’, Reinterpretation of the Indus Valley Civilisation’ and ‘Rebuttal to the Aryan Invasion Myth.’

“Shiva is an integral part of the Vedic literature and the Indus Valley archaeology, which refutes the very foundation of the Aryan invasion. The myth is just not erroneous but manoeuvred and widely popularised! A large scholarship is needed now to erase the misinterpretation sustained by the colonial hangover!” says one of these supposed pieces of evidence.

The calendar is dedicated to the Centre of Excellence for Indian Knowledge Systems (IKS) which Union education minister Dharmendra Pradhan inaugurated at the IIT Kharagpur campus on December 18. The calendar is a joint production of the IKS and the Nehru Museum of Science & Technology (NMST) which ,too, is on the Kharagpur campus.

The IKS has been mandated with creating “a comprehensive knowledge base by involving top international experts from the best universities and institutes of India and the world”, who are pioneers in ten key domains: Arthashastra; Sanskrit; Samkhya, Ganita and Jyamiti; Rasayana; Ayurveda; Jyotir-tatha-Mahajagatika Vidya; Prakriti Vidya; Nandan Tatva tatha Vastu Vidya; Nyaya Shastra and Shilpa tatha Natya Shastra.

Also read: The IIT Kharagpur Calendar Is the Right’s Attempt To Appropriate the Indus Valley Civilisation

According to Tony Joseph, journalist and author of the 2018 book Early Indians: The Story of Our Ancestors and Where We Came From, the ‘Aryan Invasion Theory’ currently lives on only in the imagination of right wing polemicists. “It has not been an academic theory for half a century. The reason why they keep it alive artificially is that they prefer to attack a strawman. What does exist today is strong, multi-disciplinary evidence for the migration of Central Asian Steppe pastoralists into the Indian subcontinent between 2000 and 1500 BCE,” Joseph told The Wire.

He cited the report of a genetic study titled, The formation of human populations in South and Central Asia, published by Science in 2019 and quoted the following from its conclusion: “Earlier work recorded massive population movement from the Steppe into Europe early in the 3rd millennium BCE, likely spreading Indo-European languages. We reveal a parallel series of events leading to the spread of Steppe ancestry to South Asia, thereby documenting movements of people that were likely conduits for the spread of Indo-European languages.”

The study, co-authored by 117 scientists, including some from India, was based on ancient DNA from 837 people who once lived in Central Asia, Iran, Afghanistan and South Asia.

Joseph cited another 2019 study, authored by 28 scientists from around the world, based on the ancient DNA of a woman who lived in the Harappan city of Rakhigarhi around 2600 BCE, which arrived at the same conclusion. It said: “However, a natural route for Indo-European languages to have spread into south Asia is from Eastern Europe via central Asia in the first half of the second millennium BCE, a chain of transmission that did occur as has been documented in detail with ancient DNA.”

Joseph said that the two studies have reaffirmed the chronology of Indian population formation as it was known to academics. “So it is accurate to say that there is robust scientific consensus today about the migration of Steppe pastoralists from Central Asia into India bringing Indo-European languages to this region. Therefore, the statements that the calendar makes are without basis. This is not surprising, because scientific discoveries are usually announced through peer-reviewed studies published in journals of high standing, not through calendar art of high creativity,” he said.

Notably, in August, while delivering a speech on the occasion of historian Irfan Habib’s 90th birthday, Romila Thapar, one of India’s foremost historians specialising in ancient times, said that proving Aryans to be indigenous to India is crucial for the Hindutva forces to defend their ideology, even though historical findings do not tend to support that notion.

“Attempts are being made to project an Aryan foundation by insisting that the Harappans were also Aryans even though there is no evidence for saying so… The Aryan presence was a subsequent and dissimilar culture from the Harappan,” she had said.

She had added that the previous method of understanding the period through the study of Vedic texts has given way to a new format of investigations using geography, archaeology, linguistics and archeo-genetics to get fresh information from these texts. She added that opponents of the Aryan migration theory tend to discard the genetic evidence as ‘unreliable’.

The calendar, a brainchild of Joy Sen, a professor at the institute’s department of architecture and regional planning who heads both IKS and NMST, claims that this scientific consensus on the chronology of Indian civilisation and history is dubious and questionable.

“The loom of the fabric of Aryan civilisation is a vast and warm landscape, and the Aryan Rishis are kind and generous; their goals are sovereign and democratic. But the objectives of the Aryan invasion is one of aggression, genetic superiority by race and skin colour. The gospel of the Vedas is based on principles of adaptation, acceptance and assimilation; whereas the Aryan invasion myth is based on aggression, invasion and extermination of other races! They do not match,” reads the text on another page.

The ‘Initial Evidences’ page of the calendar identifies three major “faults” that were inducted in the chronology which resulted in Indian knowledge systems succumbing to “faults, biases and distortions”: a) limiting the antiquity of the Vedic civilisation within 2000 BCE, b) considering everything prior to 2000 BCE as India’s pre-Aryan past with Dravidians being considered aboriginals and c) proposed Aryan supremacy, “thereby downgrading the cosmological and altruistic foundations of the Vedas and misinterpreting them as per a racial and genetic semantics.”

Several other pieces of evidence presented in the calendar say that the cyclic or non-linear patterns of the Swastika and the “arrow of Time (forward-future and backward-past)”; the systems of Yoga and Kshema and that of ‘flow’, all realised and developed by Arya sages, are synchronous with Indus Valley seals.

Sen, who conceptualised the calendar and carried out the research, had earlier been associated with the IIT’s SandHI (Science and Heritage mega initiative) project as the principal investigator. He also serves as the coordinator, Office of Concept of Complete Religion (O-CCR), at the institute.

At SandHI, he had led the research and publication of papers titled, Swastika is pre-Aryan invasion, if any; dates back 11,000 years in Vedic India: Evidences and Explorations; Exploring the pattern and ideogram of Swastika: A universal principle of sustainability; Indus Valley Civilisation: A starting point or continuity of an older order?; A reformulation of the Indo-European System of languages and a recovery of the deep morphology of Varnamala and Chandraketugarh – rediscovering a missing link in Indian history.

Many former IITians took to social media to criticise the calendar. Even conservative columnist Srikanth Krishnamachary posted his discontent on Twitter.

This is very sad

Not blaming Modi or any individual here. But the intellectual climate in the country has taken a hit https://t.co/GQeNVRNFB1

One such angered alumnus of the institute, Bihar-based Right to Information activist Ashis Ranjan, started an online petition on December 27 on behalf of the alumni. Addressed to the institute’s director, the petition “strongly condemned” the effort “to pass off dubious conjecture as established science.”

“We find that it is filled with conjectures about the antiquity and authorship of the Vedas without any hard evidence in support. At important places, it has cited from Time magazine, Down To Earth magazine and National Geographic For Scholars but not from any scholarly articles on the subject… It does not behove IIT Kharagpur to publish conjectures regarding these matters, which is not the core area of its work, in the form of a calendar without providing any hard evidence in support,” reads the petition, which had more than 1,100 signatories by the morning of December 29.

“The spirit of scientific inquiry should be nourished in one of India’s premier institutions. It is deeply troubling to see IIT KGP fall in line with the Hindutva fascist central government and push unscientific bunkum on the students as knowledge,” said Soumik Pal, one of the signatories to the petition.

Surya Putchala wrote, “As an alumnus, I am very concerned about the direction the Institute is taking in terms of promoting false propaganda related to the ‘origins’ and culture of India. A violation of the article 51A of the Constitution of India, that too by a Premier Institute in India is unfathomable by any standard.”

“Shocking to see an IIT indulge in such ideology-driven, ignore-the-evidence, conflation of mythology and science. Scary!” said Arnab Bhattacharya, another signatory.