The state education department has stopped publishing textbooks and providing exam papers in Urdu, and no new posts for Urdu teachers are being advertised. 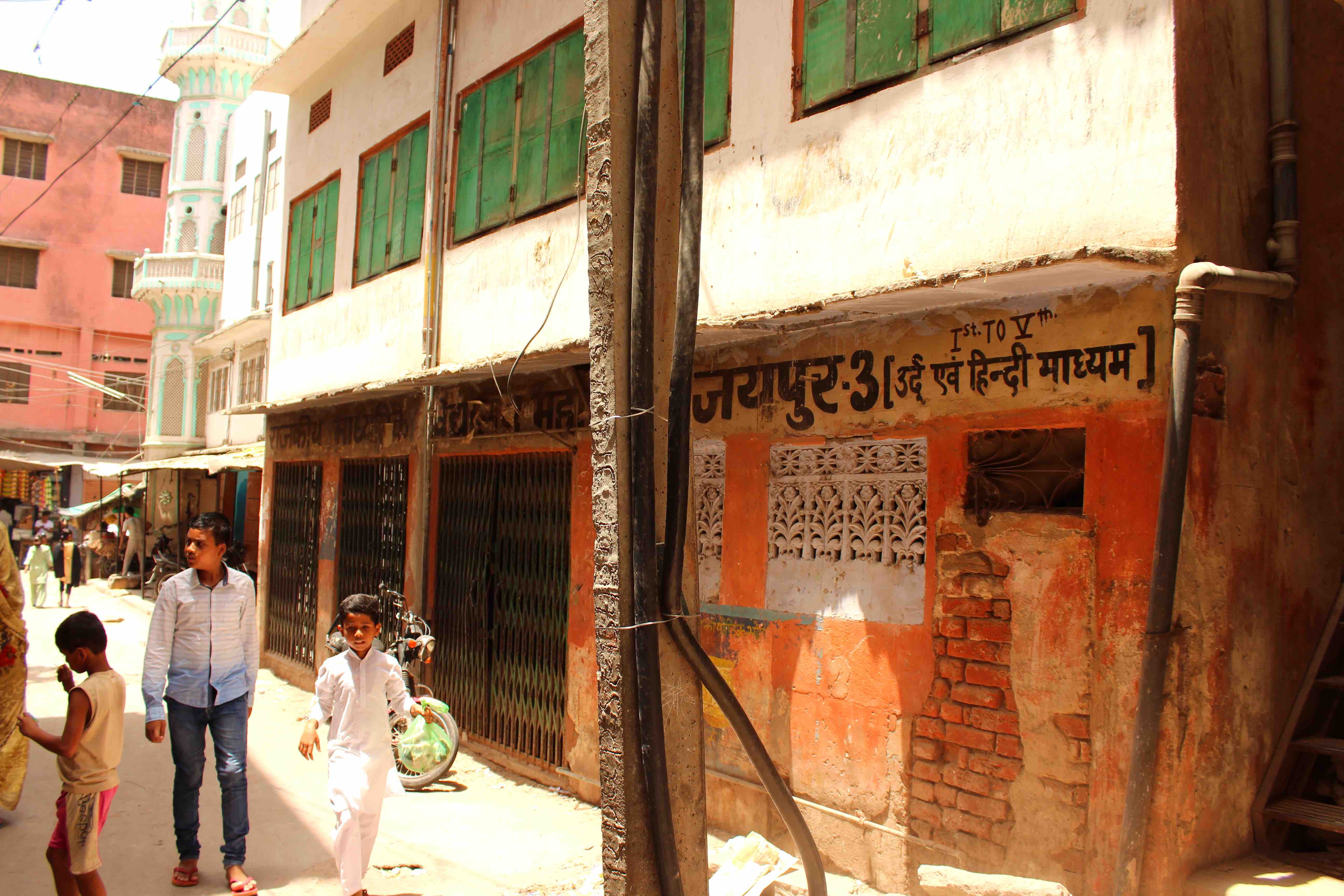 Jaipur: Jalil-ul-Qadar, 59, has taught Urdu at a government secondary school in the Mahawatan mohalla of Jaipur for the past 20 years. “I studied in an Urdu-medium school run by the state government in the Pahadganj area of Rajasthan. They are completely different from madrassas,” he says.

The Rajasthan government has dealt a heavy blow to Urdu as a language of instruction in schools. With the education department slowly trying to eliminate Urdu as a medium of instruction under it, both students and teachers are not sure what to do.

The class five state-level examination for the year 2016-17 was conducted by the government of Rajasthan from April 8 to 13 in all public primary schools. The question papers for mathematics and environment education were provided in Hindi by the state’s Department of Education, ignoring the fate of thousands of students who were taught in their mother tongue (Urdu/Sindhi) in linguistic-minority schools under the government. 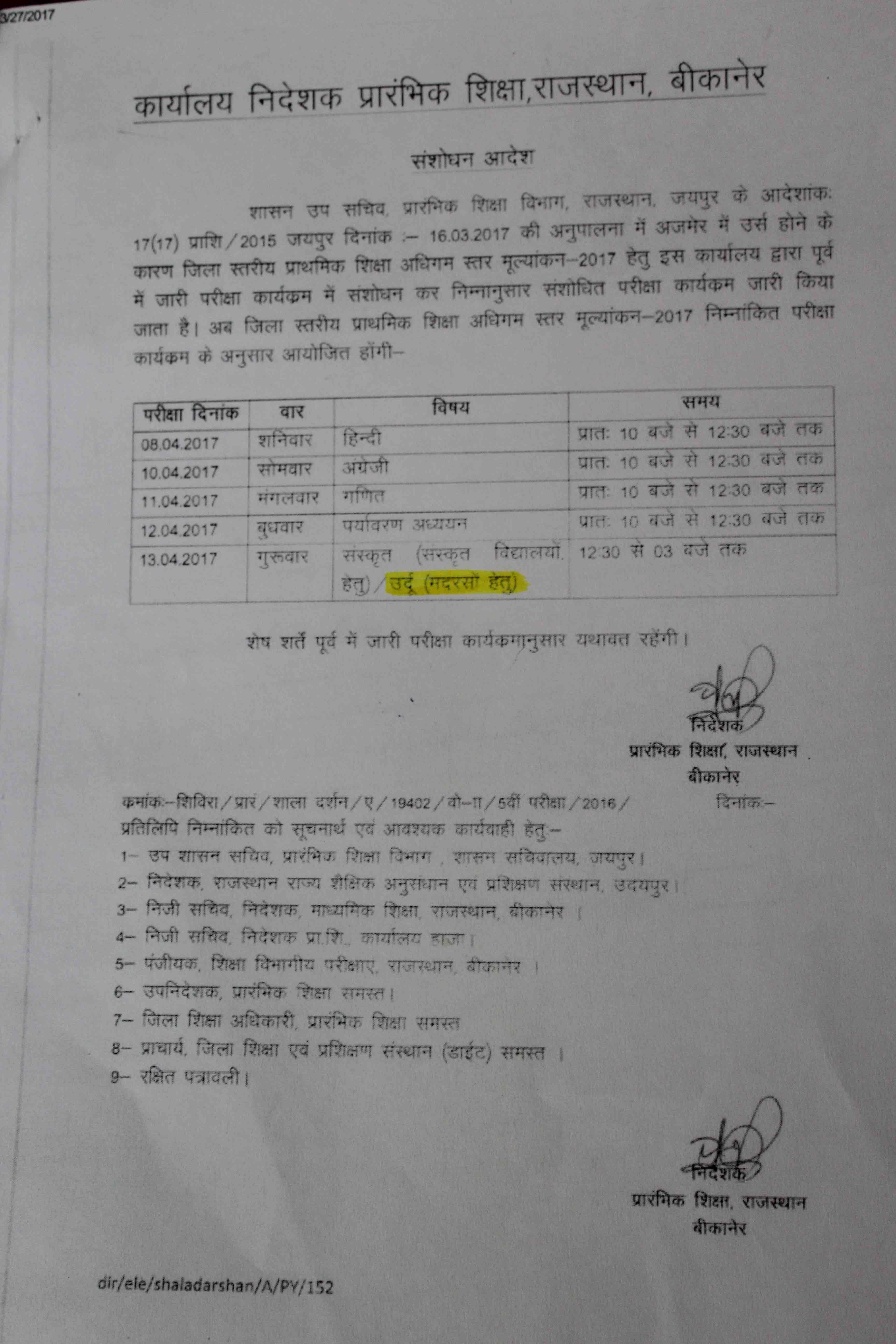 The examination timetable clearly specified that Urdu question papers were meant only for madrassas and not Urdu-medium primary schools. Out of confusion, many schools avoided conducting their exams in Urdu.

Section 29 (2) (f) of the Right to Education Act, 2009 reads, “The academic authority, while laying down the curriculum and the evaluation procedure, shall take into consideration the medium of instructions, as far as practicable, in child’s mother tongue.’

The five subjects (English, Hindi, mathematics, environment education and Urdu/Sindhi/Punjabi/Gujarati) taught in linguistic-minority primary schools follow the same curriculum as any Hindi-medium school, only the medium of instruction is the student’s mother tongue.

Before this year, examinations in Urdu-medium primary schools were always conducted in Urdu. Between 20-25 Urdu teachers were nominated by the district education officer to prepare question papers in Urdu. This changed in 2012, when the Continuous and Comprehensive Evaluation (CCE) system was introduced and schools were given the authority to prepare question papers for all subjects on their own. This year, however, the state government decided to conduct examinations for class five students and the education department made the question papers.

“What could be more foolish than eliminating Urdu from Urdu-medium schools?” asks Anwer Ali, an Urdu teacher at the same school as Jalil-ul-Qadar. “Students who were taught mathematics and environment education in Urdu since class one were compelled to write their examination in Hindi. Changing the examination pattern for class five will affect the teaching pattern in other classes too and eventually, Urdu-medium schools will be done away with. The explicit use of the word ‘madrassa’ in the state government’s primary education examination timetable clearly shows the intention of the BJP to restrict Urdu to only madrassas.” 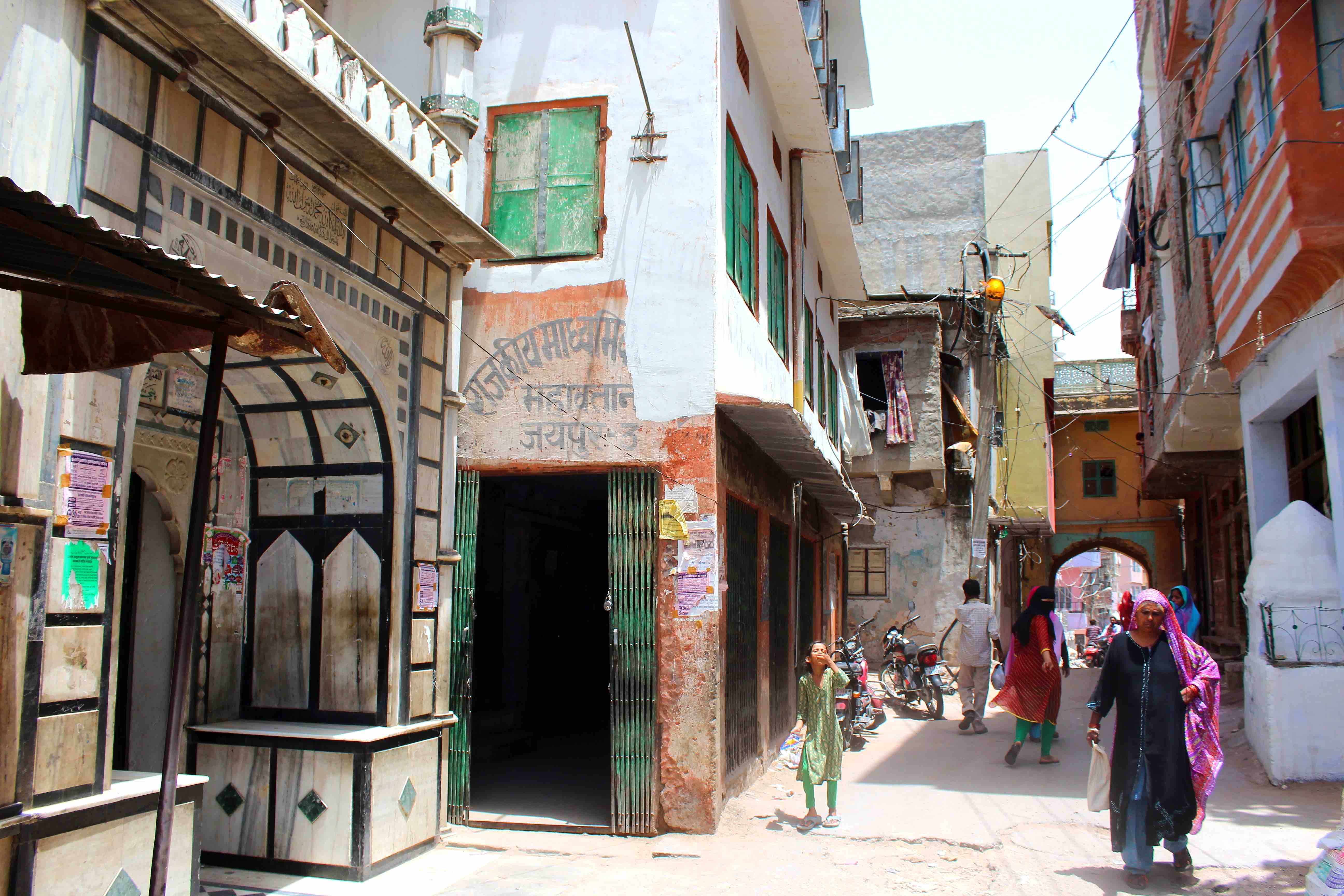 Rahim, a resident of Mahwatan mohalla, Jaipur said, “Though we don’t understand much about this issue, we know kids in the locality complained that they couldn’t attempt their exams properly as the language was restricted to Hindi. They fear they won’t pass this year.”

The Minority Development Institution of the area, through its president Mohammad Aslam Khan, has made several complaints to the prime minister’s office and chief minister of Rajasthan, but hasn’t received any positive response yet. “It is a matter of linguistic-minority students’ constitutional and fundamental rights. Our kids are suffering because of the education department’s haphazard functioning. The sudden change in medium of instruction will affect the future of thousands of students studying in linguistic-minority primary schools,” said Khan.

No vacancy for Urdu teachers

The new staffing policy after the merger of public schools also reduced the number of teaching posts for Urdu and other minority languages in the state. Post the merger, no Urdu teacher for primary level (classes one to five) has been appointed.

“Now, the designation of an ‘Urdu teacher’ has been changed to ‘Level one/Level two’ depending upon the classes taught by the teachers. Teachers teaching from class one to five are level one and from six to eight, level two. No third grade Urdu teacher has been promoted in the Jaipur division till date. If the government wants to restrict the mother tongue as just an optional (third) language in schools, why is it promoting Sanskrit? It’s a conspiracy to eliminate Urdu,” said Ameen Kayamkhani, president of the Rajasthan Urdu Teachers’ Association.

Jalil-ul-Qadar is going to retire next February. He holds an MA and Adib-e-Kamil in Urdu, but has never been promoted.

“The new staffing pattern was meant to make sure that more than one teacher of the same subject are not appointed in the same school. The appointments are based on need and if there is no requirement of Urdu teachers then the number of posts will automatically shrink,” Sharma told The Wire.

No textbooks in Urdu 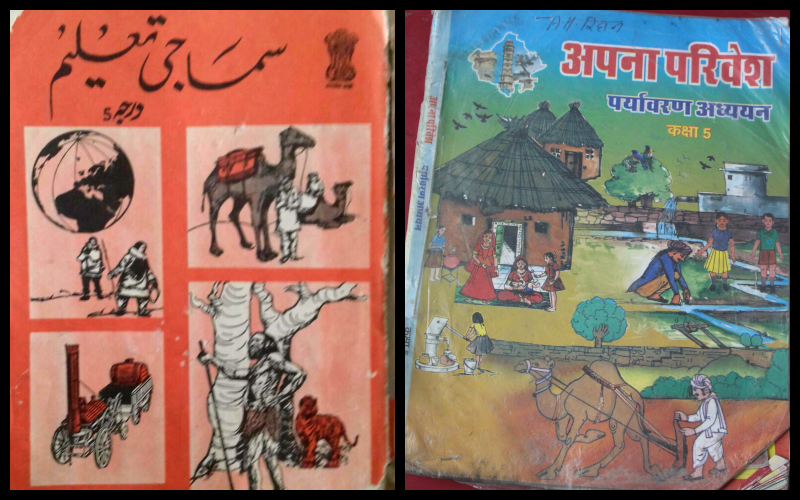 After textbooks are approved by the state government, the Rajasthan State Textbook Board (RSTB) is entrusted with the responsibility of having them printed and distributed among students of classes one to eight studying in government schools. Urdu textbooks were last published by the board in the year 1997. When The Wire contacted the RSTB for comment, an official, on the condition of anonymity, said that it has not received approval for Urdu textbooks after 1997.

Rent not paid by the government

The government Urdu-medium school in Mahawatan mohalla is given space on rent to conduct classes in the Panchayati Masjid. The monthly rent charged by the Waqf Masjid Pachayat is Rs 1,03o, which was last paid in April 2013.

“I’ve made several reminders to the education department to make the pending payment but haven’t receive any response yet. I’m afraid the school will be sealed soon,” Pahalwan Singh, lower division clerk in the school told The Wire. 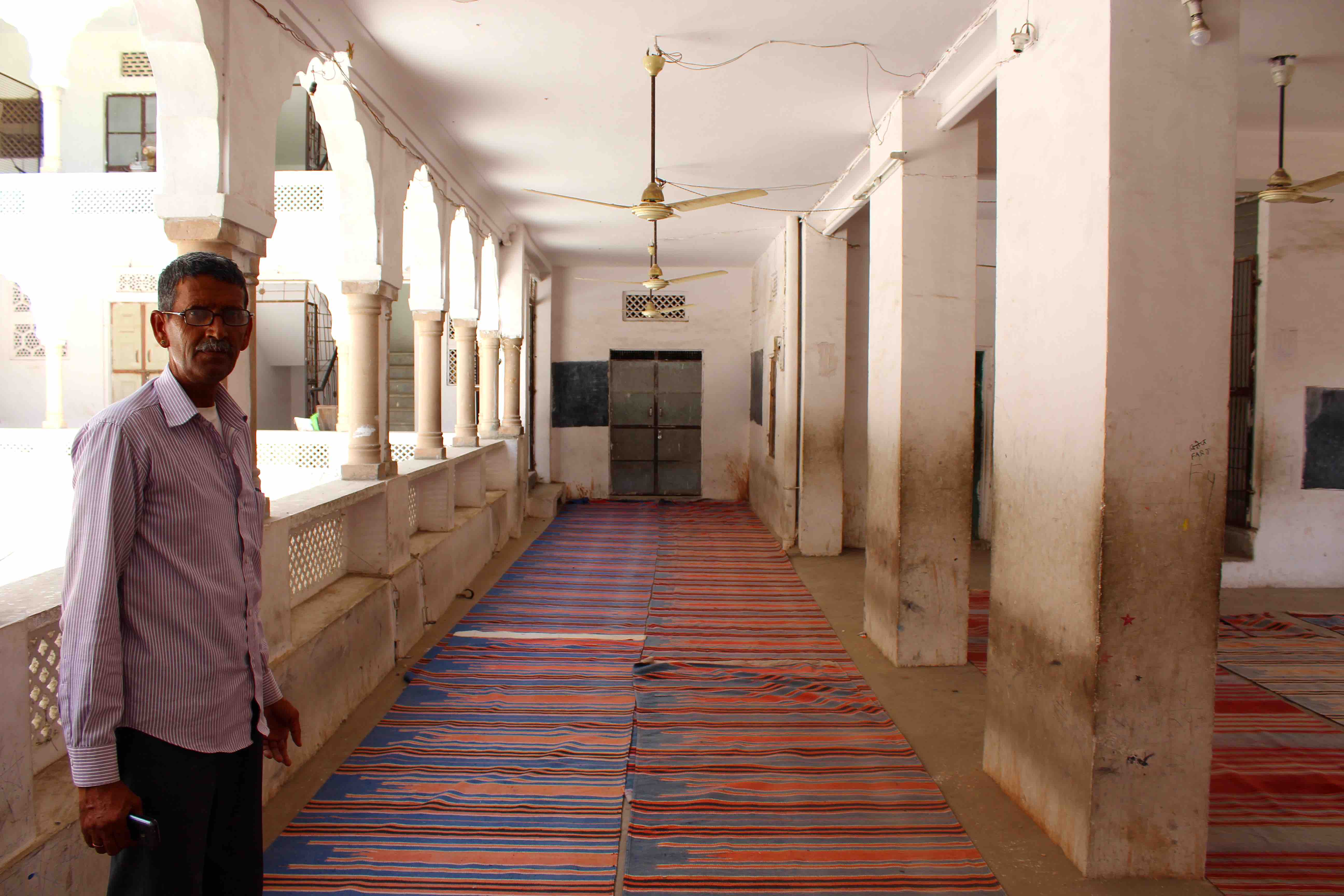 Pahalwan Singh in the Mahawatan Urdu-medium school points to the classroom in the Panchayati masjid. Credit: Shruti Jain

“About 650 students study in a very small space given in the masjid. We carry classes in two shifts, the morning shift is for classes six to ten and the evening shift is for classes one to five. The masjid can give us more space but we haven’t paid them for the last four years. It seems that the government is not serious about the education of students in Urdu-medium schools,” added Singh.

“Urdu medium schools have always been under the aegis of the state government, whose responsibility it is to pay the teachers,” Khan said. Quoting Article 350A of the constitution, which says that the state shall provide primary education in the mother tongue for linguistic-minority groups, Khan asks, “How can the state government reject this? The Department of Minority Affairs runs only the madrassas, not linguistic-minority schools. We won’t let the government eliminate Urdu-medium schools,” added Khan, who has filed a civil writ petition on the matter in the Rajasthan high court.