University to Scholars: Work on 'National Priorities', Not 'Irrelevant Research'

Vice-chancellor says PhD students don't know what the country needs and will have to choose from a list of projects in line with "national priorities".

New Delhi: The Central University of Kerala (CUK), Kasargod, will now provide incoming PhD students with a list of research topics “in accordance with national priorities”.

According to a circular issued by the vice chancellor of the university, the students will have to choose from among the topics thus selected and will no longer be allowed to carry out “irrelevant research”.

K. VijayRaghavan, the country’s principal scientific advisor, told The Wire that “the notice from the registrar could have been worded slightly (!) better to capture the spirit and purpose on this matter. A significant number of PhD topics in the humanities, social sciences, in science and in technology tend towards the pedestrian rather than an attempt to answer important basic questions in the field or developing important applications.”

However, the university has thus far stayed clear of elaborating on what it considers ‘irrelevant research’. This attitude parallels the Bharatiya Janata Party’s (BJP’s), which – at the Centre – has promulgated a variety of schemes focused on “national priorities” but hasn’t said what they could be at any point.

G. Gopa Kumar, the university’s vice-chancellor, did elaborate on what he meant by a “national priority” research area. “The nation’s priority means its economy, technology, food security, social issues. A 25-year-old student will not know what the country needs. So it is better to give him/her ideas,” he told the New Indian Express.

However, VijayRaghavan said, “Research scholars, who are all adults, should also have the opportunity to develop adventurous questions on their own. The best outcomes are from the daring of youth. Today’s young are sometimes in the straitjacket of the routine, doing an incremental advance on what their predecessors did.”

He suggested that “universities could develop a list of broad challenges in each area. Scholars should be free to use these are as possible areas from which specific questions can be developed. Or develop completely new questions that they consider important” (emphasis in the original).

The circular, issued by Kumar, directs the heads of departments to convene a meeting of all faculty members and create a ‘shelf of projects’ that are in line with the priorities. The “shelf” will provide aid to PhD students, who according to Kumar are unaware about ‘what the country needs’.

While not so presumptuous, this is similar to the flak Prime Minister Narendra Modi has drawn from scientists for asking scientists to work on specific areas, especially during talks delivered at the Indian Science Congress since 2015.

Kumar’s circular mentions that the decision is based on a vice-chancellors’ meeting held in Delhi in December 2018. A similar decision is likely to affect all central universities in India, of which there are 15.

CUK itself was established in 2009 and has over 240 PhD students.

CUK’s faculty members have pointed out that it was issued without the academic council having discussed it. 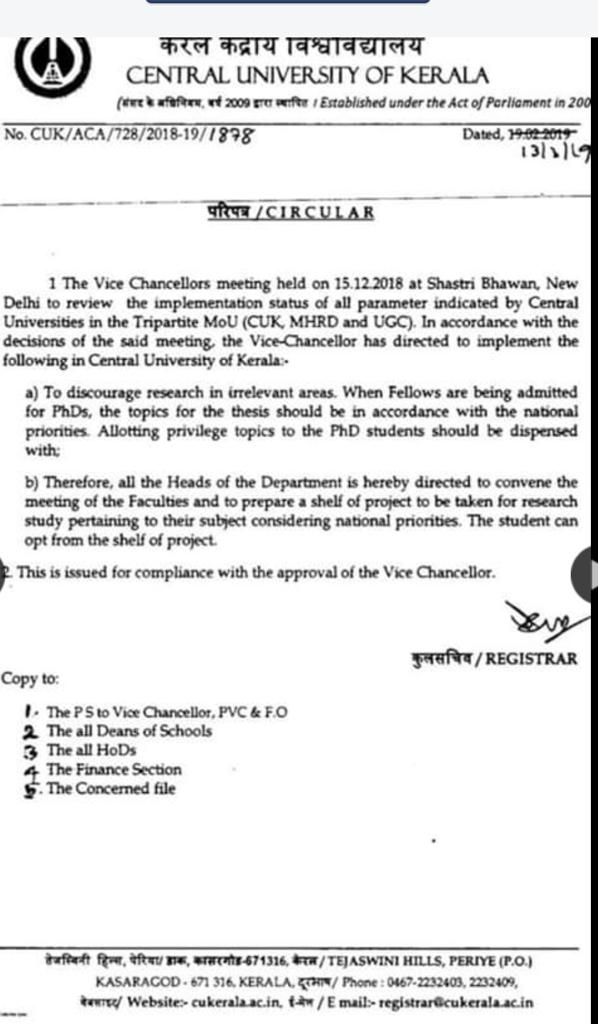 “There is a doctoral research committee comprising subject experts to decide the relevance and priority of the topics. Research cannot be done based on bureaucratic orders,” one teacher told the newspaper.

Additionally, Kumar also hasn’t clarified whether students working on subjects of “national priority” will be better-funded or even funded on time. This is one of the dominant issues assailing research scholars around the country, and for which they’ve hit the streets on multiple occasions.

Also read: With All Eyes on Science, Social Science Scholars Flounder With Even Less Money

Students have also expressed fear that the circular intends to curb their voice, especially of those from marginalised communities.

“Even now, some departments have a certain level of dislike for students who are doing [studies] on Ambedkarism and Dalit issues,” Ajith, a PhD scholar at the university, told the News Minute.

“Students from social sciences stream constantly question the university and their wrong-doings. As far as we can comprehend, through this circular, the authorities do not want to take any more students who voice against them.”

The “national priorities” narrative is widely believed to have enabled the Centre to move its goalposts depending on its shifting needs. Its consequences were perhaps the keenest when the BJP announced the Prime Minister’s Research Fellowship in 2018.

This was a scheme to reward high-achieving students from an arbitrarily chosen group of institutions. Over 96% of its first batch of winners – announced last year – were working on applied instead of fundamental research.