Thousands Protest in Delhi Against the Alleged Privatisation of Education 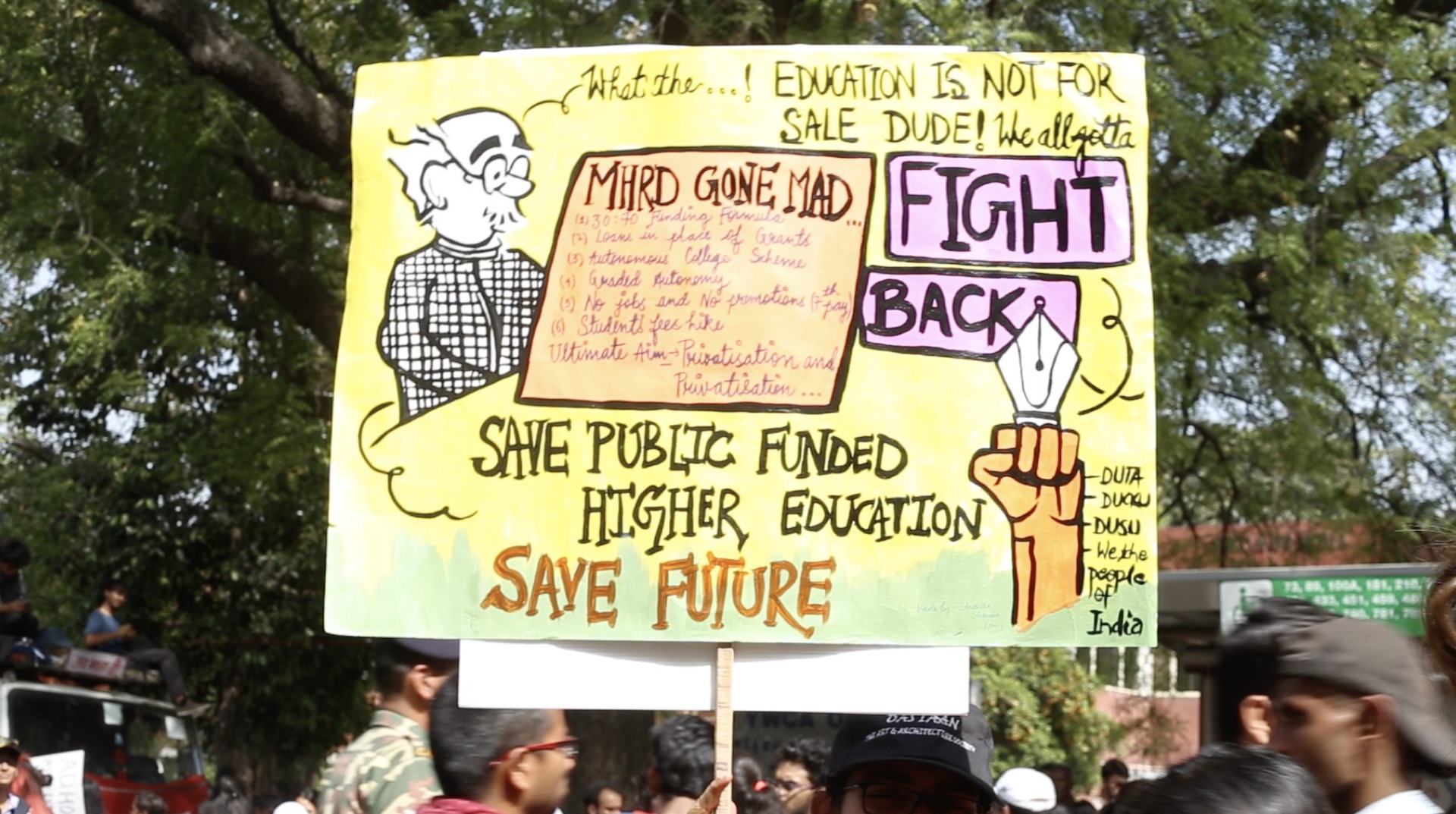 New Delhi: On March 28, thousands of students and teachers marched across Delhi to protest the alleged privatisation of education. Organised by the Delhi University Teachers’ Association (DUTA) and the Federation of Central Universities Teachers Associations (FECUTA), the protest was against the Central government’s education policies.

A press statement by DUTA stated that over 15,000 students and faculty participated in the protest which began at Delhi’s Mandi House and ended in a public meeting on Parliament Street.

The rally was against the graded autonomy, negative pay and service condition of teachers and the policy of loan-based funding through the Higher Education Funding Agency (HEFA). The University Grants Commission (UGC) granting full autonomy to 62 higher educational institutions on March 20 was what sparked yesterday’s protest.

With the revised status, autonomous institutions can open off-campus centres using their own funds and without the approval of the UGC, hire foreign faculty and enrol international students, collaborate independently with the global top 500 universities and design their own curriculum without UGC approval. Additionally, these institutions can independently start new courses and departments on the condition that the university doesn’t take financial assistance from the government.

St. Stephen’s College is among the institutions that have applied for an autonomous status, a move many students have opposed claiming it was not done in a democratic manner.

During the movement in the 90s across colleges in India, students were arguing for greater academic freedom and independence from the bureaucratic and political control of the administration.

“That movement came up in the context of growing politicisation of education. Government representatives were present at all levels of university functioning,” said Upal Chakrabarti, assistant professor of sociology at Presidency University, Kolkata. “These representatives would carry their partisan agenda and influence the standard of academics at the university. What that movement was asking for was the withdrawal of partisan agenda of the government from the university space.”

Whereas now, students, faculty and opposition parties argue that the so-called autonomy granted by the current government is merely financial and not academic.

Many argue that the autonomous status will lead institutions to self-finance funds for new courses and programmes, which will be done by hiking tuition fees for students. Consequently, economically weaker students and those from marginalised communities would be unable to afford education, making academia an exclusive space for the wealthy.

“[This autonomy] is a freedom given to the managing trusts of colleges and university administrations to manage the affairs of the college, to create business models, and to ensure that free hand is given to them so that they can generate resources internally by hiking student fees at will, by forcing teachers to do corporate consultancy,” said Saikat Ghosh, assistant professor of English at Khalsa College, who was present at the march.

“Through that, the government wants to ensure that its own financial responsibilities are steadily reduced to the ultimate level where the government will pull out of public funding of higher education in a complete manner.”

Critics of the new regulation also argue that these autonomous institutions will be forced to provide courses based on their profitability. Thus, courses in departments like the arts, humanities and social sciences will face cutbacks while management and technical courses would be promoted while orienting students toward a career-driven economy.

For instance, Jawaharlal Nehru University, famed for its research and speciality in the social sciences and humanities, plans to offer courses on engineering and management.

The move to privatise education initially began under the UPA regime, but it has become more aggressive under the Modi government. For instance, DU has been protesting the recommendations of the Seventh Pay Commission which asks the university to fund 30% of staff salaries while the Centre funds the remaining 70%.

The UPA government had also proposed an 80:20 funding formula for staff salaries, which never got implemented.

In another move to liberalise the education sector, centrally-funded institutions (CFI), including IITs and IIMs will have to take loans for infrastructure projects from the newly-instituted HEFA instead of the grants from the Centre.

The UGC has said that salary commitments of CFIs, which were being met by the UGC/Ministry of Human Resource and Development, will now be fully provided for by the Centre under the revised pay commission. However, it has been silent on the status of allowances and pensions for teachers, while no assurance has been given to state universities.

Ghosh stated that among the total number of teachers in Delhi University, 5,000 are permanently employed while the remaining 6,000 are hired on an ad-hoc basis.

DUTA’s primary demands include suspension of loan funding through HEFA and an unconditional withdrawal of autonomy grants. If these are not met, it claims to take this movement nation-wide and build momentum against the government’s move to commercialise education.