The students, most from Punjab, have spent lakhs on fees and travel. No longer 'students', their visa and permission documents are now invalid. 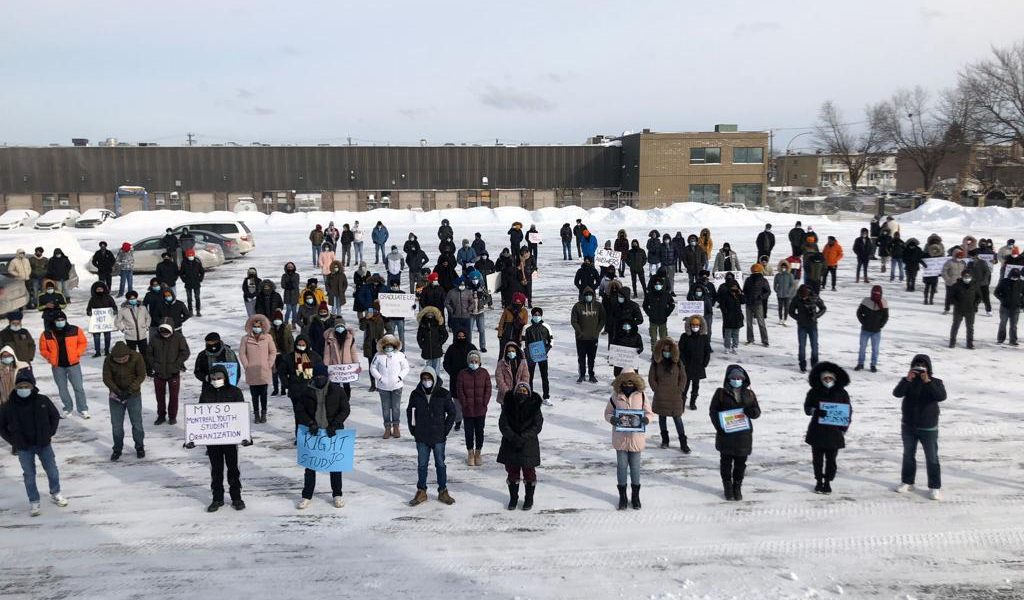 Jalandhar: Around 2,000 international students – most from Punjab, some learning online and some on study visas – are left in the lurch with three private colleges in Canada’s Montreal city suddenly closing.

Canada’s CBC News has reported that all three colleges have filed for creditor protection. In the court filing, the colleges blamed the COVID-19 pandemic for some of their financial troubles. A Canadian MP told The Wire that other legal criteria were also not met by these colleges.

The three colleges first announced long winter vacations from November 30, 2021 to January 10, 2022. Then, just before closing, the authorities asked the students to deposit pending fees within one week. This amount of money ranged from Canadian $ 15,000 to 29,500, which come to between Rs 9 lakh and Rs 17.70 lakh.

While some students managed to pay the hefty fees, many could not.

CCSQ has two campuses at Longueuil and Sherbrooke and offered courses in accounting, secretarial studies, medical, computing and legal studies.

Among the 2,000 affected students, 1,173 were studying in person, in the three private colleges in Montreal. As many as 637 students were pursuing studies through online classes from home in Punjab.

The students are aged between 18 and 22 years. Some are also from Haryana and Gujarat and had been eagerly waiting for on campus learning to begin.

On January 29, 2022, left with no option, students under the banner of ‘Montreal Youth-Student Organization’ (MYSO) held a rally at Gurudwara Guru Nanak Darbar at LaSalle in Montreal demanding justice in their case. They also handed a letter in this regard to the Minister of Education of Canada, the Indian Ambassador to Canada, the Montreal MP and various ministers of the opposition. 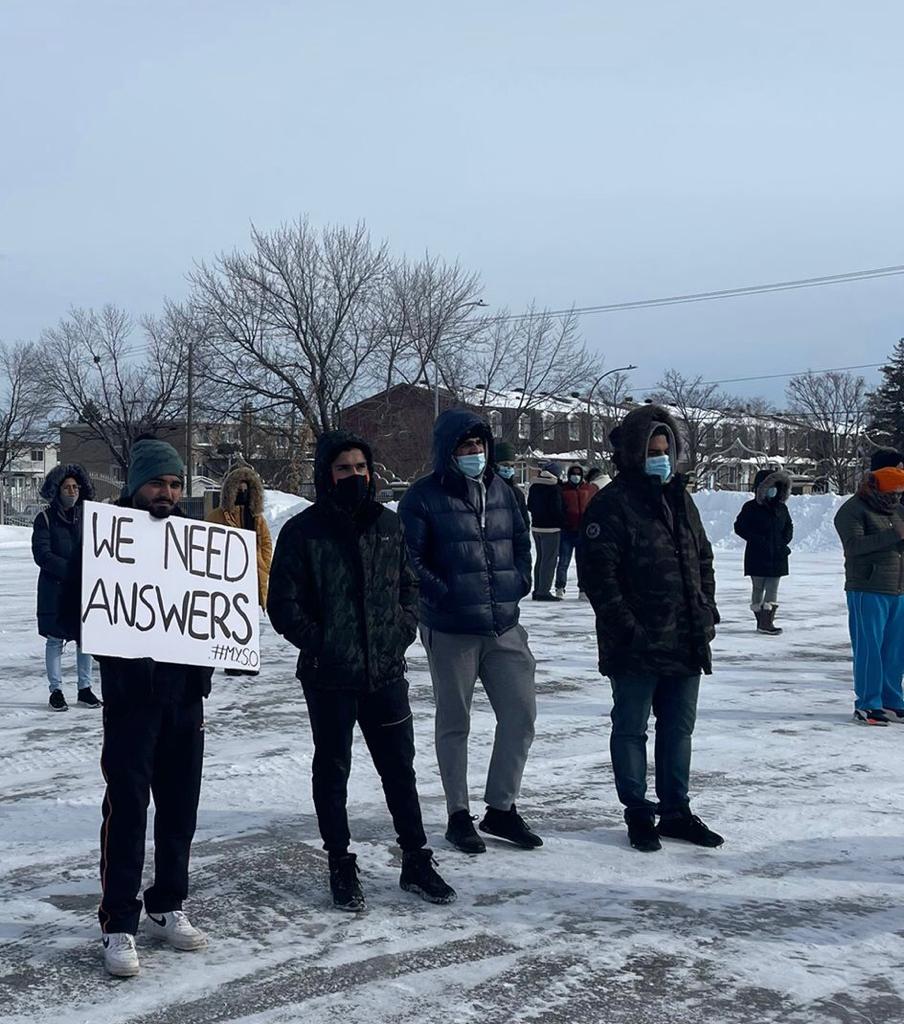 At the rally, the students demanded visa refunds for those in India, refund of fees, opportunity to complete studies for students in the three closed colleges, graduation of students with the Certificat d’Acceptation du Québec, a mandatory document for students to study and work in Quebec province, study permits and travel without any hassle to students who have obtained study visas.

They threatened to intensify protests if their demands were not addressed.

Also read: For Many Indian Students, Their American Dream Is in Limbo

Talking to The Wire from Montreal, Varun Khanna, a former student and now a Permanent Resident of Canada, who led the rally said, “The hapless students and their parents, who have spent roughly around Rs 16 to 17 lakh on their child’s education in Canada are disturbed. The study visas of 95% students back home in Punjab, who were taking online classes, have been refused by the Canadian government. At the same time, 70% of students in Montreal, who were in their last semester, are now stuck. Lastly, the future of 30% freshers, who joined college last year is also at stake.”

Khanna added that students in India, who were waiting to reach Montreal now cannot travel as the colleges have closed. 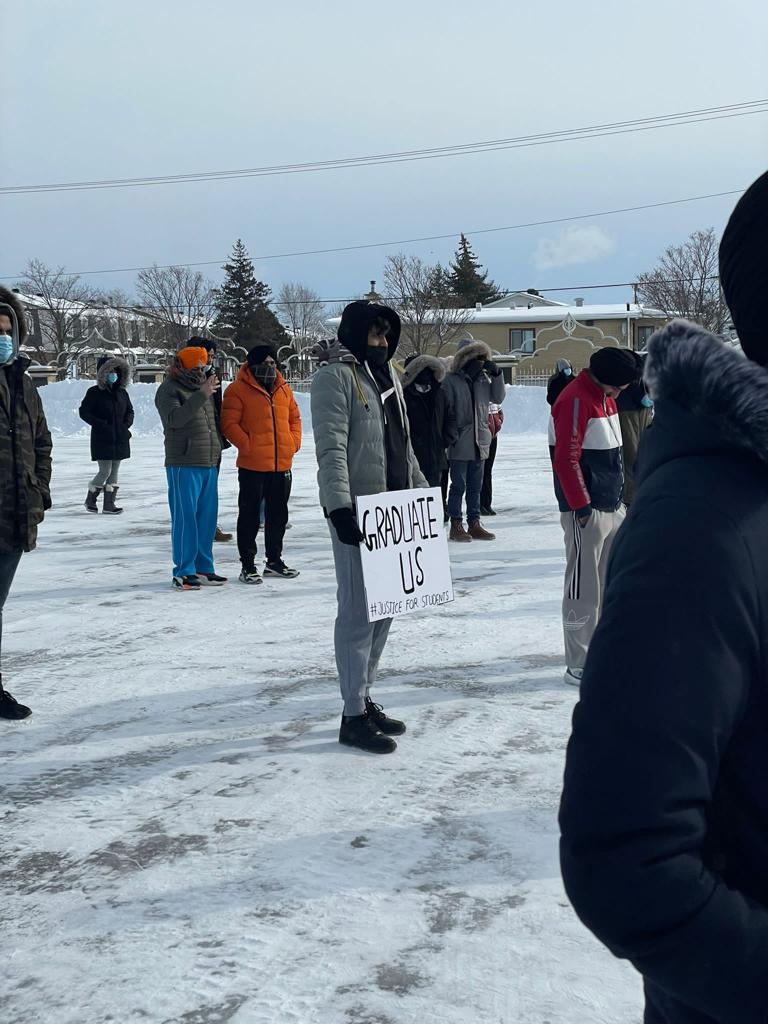 Randeep Sarai, MP from Surrey Centre in British Columbia said that he took up this issue with Anju Dhillon, the MP for Dorval-Lachine-LaSalle, Quebec.

“The Quebec government suspended the licence of these colleges, after it was found that they were English Language Schools and not French language institutions. During investigation it came to light that many colleges had misappropriated funds while others declared bankruptcy and fled. The provincial government took them to court. A judicial review was ordered by the Quebec government and the students were stuck,” the MP said.

Sarai said that in this situation either the students should file a lawsuit collectively and hire a lawyer or file independent claims with the provincial government. “The last option is that the students appear for IELTS exam again, pay the fees and join some new college, which is not a practical idea,” he said.

Surrey Greens Timber MLA Rachna Singh expressed solidarity with the students. “I think the Quebec government should hold an investigation and find out how these three colleges got their license. In Canada, federal government regulations are different while the Provincial government has their own rules. I also want to request the parents to be cautious while sending their children abroad,” she said. 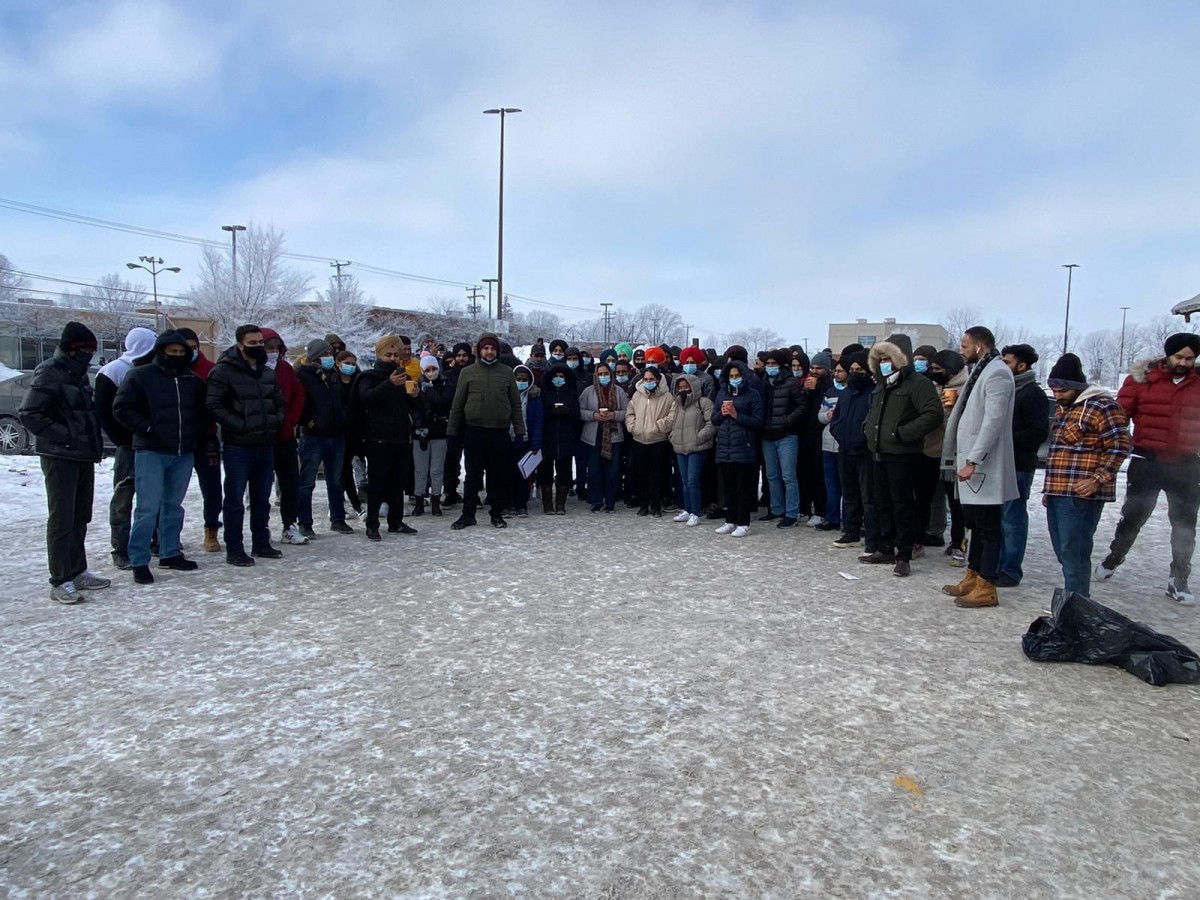 Ravneet Kaur was enrolled at CCSQ College. Ravneet was in the last semester of her medical office specialist course and arrived at Canada after passing her Class 12 exams in January 2020. “Usually, the fee is paid per semester but we were told to pay the pending fees before December 3, 2021. Left with no option, I paid a Canadian $ 29,500 fee within a week. It was difficult to arrange such a huge amount,” she said.

Ravneet hails from Gurdaspur district said there were many students who are now at home without work and facing an acute financial crunch. Their Social Insurance Number – issued by the Canadian government to students on study visa permits – are also not applicable anymore. “Though my SIN card is valid till April 30 but seeing that we are not studying in colleges anymore, there is a legal pause on us. This is a crisis,” she said.

Another student, Manjot Singh, from Amritsar district was pursuing a network administration course from CDE College. Manjot arrived at Montreal in September 2020, after his Class 12 exams.

Also read: For Indian Students Planning to Study Abroad, the Second Wave Has Been an Expensive Nightmare

One of his paternal cousins joined CCSQ college. Both CDE and CCSQ colleges are situated in the same building.

Manjot who had his last class on November 27, 2021 and is currently without a job or classes, said his CAQ – Certificat d’Acceptation du Québec – was also expiring.

“My parents took a loan to pay my Canadian $ 29,800 fee. In fact, we came to know that the college authorities took approximately Canadian $ 6.4 million from all students. It is our humble appeal to Prime Minister Justin Trudeau to help us and our classmates sitting in India. They too paid the entire fee and fulfilled all eligibility criteria. The government should arrange for a refund,” Manjot added.

Similarly, back home in Punjab, Nisha Rani, a post-graduate student in humanities from Moga district, had been attending online classes from September 2020 at M College.

“As COVID-19 cases were rising and there was a ban on international travel, I could not go to Canada. We are 637 students, who were pursuing classes online, from 3 pm to 2.30 am IST. I have submitted all my projects, presentations and even practical exams. But after studying for one and half years and paying Canadian $ 14,852 fee on loan, my study visa was rejected on August 14, 2021,” she said.

Nisha said that so far 633 students who were studying in these colleges from India have been refused study visas.

Her overall IELTS score, a mandatory requirement to study in English speaking countries, was 6.5. “I sent messages to the High Commissioner of Canada through their official Twitter page ‘Canada in India’ that I want justice but to no avail,” she said.

Nisha along with many other students had applied for study visas through International Development Program consultants, CANAM consultants and some other firms active in various cities of Punjab. She said, “I applied for a study visa through IDP’s Ludhiana and Moga branch. They handled visas of all the students of CCSQ, CDE and M College.” 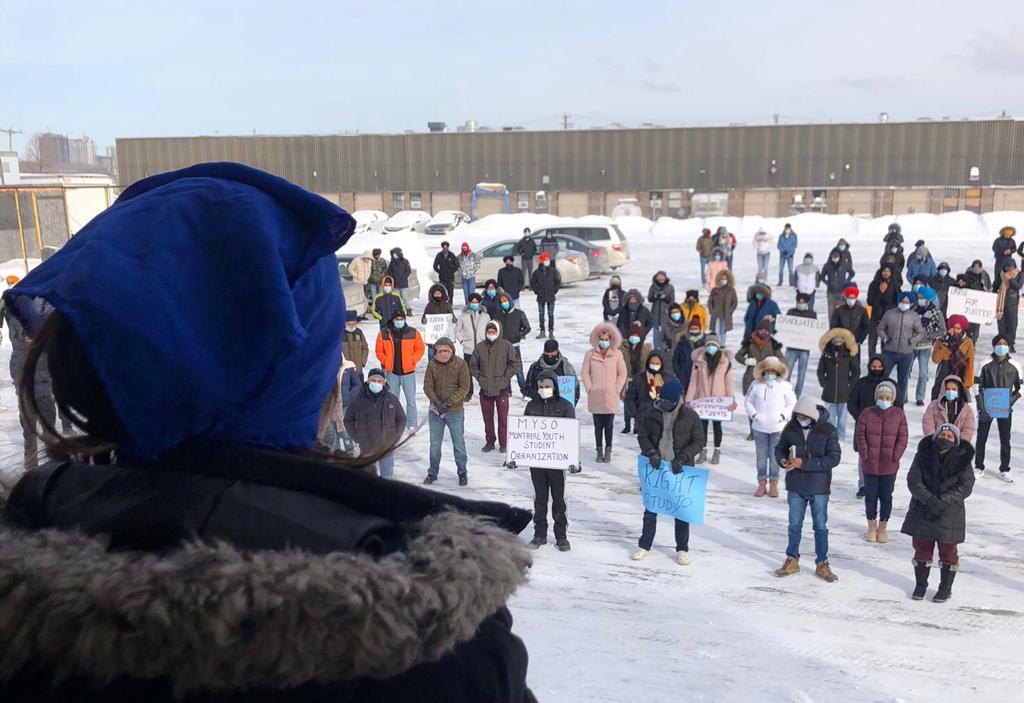 The Wire spoke to International Development Program’s Moga branch manager Hari Krishan, who said that he was aware of everything and equally concerned.

“It is the students who choose the college. We never force them to join a particular institution. Our role is to act as an intermediary between a student and Canadian authorities. But our client relationship teams in Delhi are talking to the Canadian government to solve this crisis,” he said.

In Nawanshahr district, Jaskaran Singh’s mother had mortgaged her agricultural land to pay her son’s Canadian $ 15,000 fees. Jaskaran’s father passed away a long time ago.

His cousin, Garry Sohal said, “Jaskaran had applied for a study visa in July 2020. After studying online for around a year, his visa was also refused in August 2021.”

Amritsar MP Gurjeet Singh Aujla, who is busy ahead of the Punjab assembly polls, called this a very serious matter. “I will write a letter to the Canadian High Commissioner in India and Indian High Commission in Canada and demand justice. I am not in the parliament because of elections but I will take up the matter in March,” he said.

Every year lakhs of students, skilled workers and businessmen from Punjab leave for Canada in search of better opportunities.

Even matrimonial columns of newspapers are also flooded with advertisements asking for men or women who have passed the IELTS, with the promise that “expenses of education would be borne by the spouse’s family.”

Manjit Singh, former professor of sociology from Panjab University, Chandigarh said, “This shows how, over the years, respective state and Union governments have ruined Punjab. Governments are not bothered.”

Demanding intervention by the Ministry of External Affairs and the Canadian government, Manjit Singh said it is a harsh reality that India has neither quality and affordable education nor employment opportunities. “Students want value for their education, which they are not getting here,” he said.