The #Occupy UGC Agitation is About Saving Indian Education

The NDA government, like its predecessor, wants to hand over the Indian education sector to international players, thus altering it forever 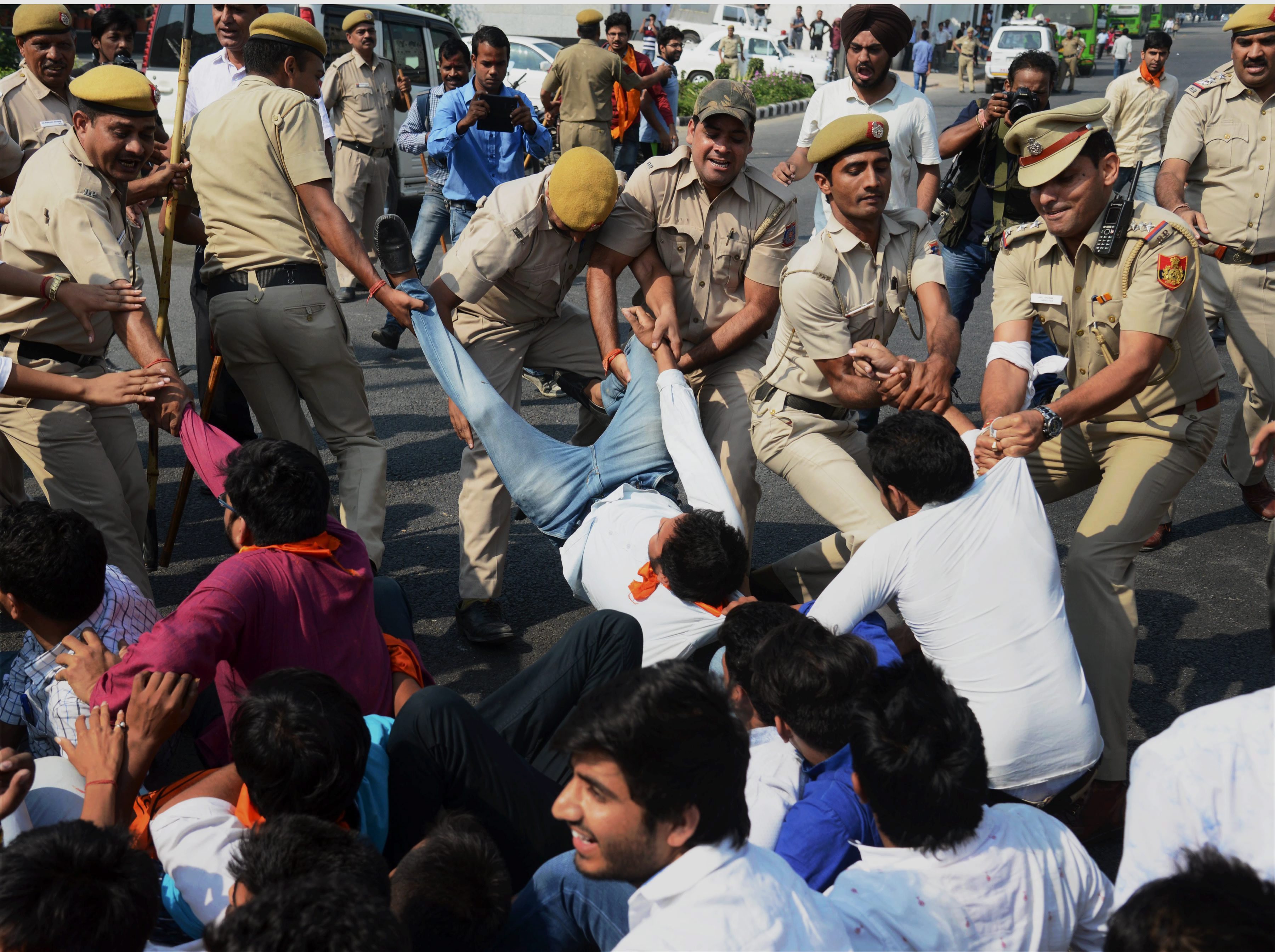 Police detain students who were protesting at the University Grants Commission (UGC) headquarters in New Delhi on Friday against the scrapping of fellowship awarded so far to non-National Eligibility Test (NET) research scholars. Credit: PTI

The past week has seen the sudden emergence of a fresh challenge for higher education in the country, with the University Grants Commission announcing that it would be discontinuing the “non-NET fellowship for M.Phil/PhD” scheme from the next academic year, on the grounds that there were complaints of its misuse and of non-transparency in implementation.

The announcement was immediately met with an uproar in the academic communities of Central Universities (where the scheme has been in operation for nine years), and a mass protest, called Occupy UGC, was launched outside the offices of the Commission. On Tuesday, police cracked down on the students and several of them were severely injured. Many, including women students, were also beaten in police vans. This follows an earlier police action against peacefully protesting students on 23 October.

In order to understand what the issues are and why this is widely being perceived as an assault on students’ social science and humanities research, it is necessary to place this scheme in the context of how M.Phil. and PhD research Is funded in our system of higher education.

Funding students’ research is a priority

At the very top, in terms of quantum of financial support, is the UGC Junior/Senior Research Fellowship, carrying emoluments of Rs 25000 – Rs 28000 respectively, plus a contingency grant and a basic contribution towards house rent. JRF/SRF scholars are selected through a national competitive examination held twice a year. Qualification for JRF automatically entails qualification in the National Eligibility Test for lecturership (awarded to the top 10% of candidates appearing for the exam), satisfaction of which is essential for selection for a teaching position at the Assistant Professor level.

Although there are serious and pressing questions about the nature of the NET/JRF test such as whether multiple choice questions can ever test aptitude for teaching or research, the indisputable fact is that the JRF picks out a very small subset of students to support for M.Phil./PhD research – the figure of 6400 fellowships in 2010-2011 works out to research support for just 4.6% of the 137,668 students registered for research in the humanities, social sciences and sciences across India in that period. This is hardly the kind of research investment any country, especially a developing one like India, needs.

Research degrees, especially doctoral degrees, involve a substantial investment of time and money. Besides living expenses, anyone who wishes to pursue a research degree needs to meet the costs of about five years of study materials as well as of fieldwork/experiments, participation in research meetings, besides living expenses, tuition and hostel fees. In order to meet the challenges of a potential elite bias in eligibility of research – a possibility made even more salient after the implementation of OBC reservations -– the UGC instituted the thoroughly misnamed ‘Non-NET fellowship’ in order to provide minimum research support for non-JRF/SRF students (many of whom are NET-qualified) enrolled in M.Phil./PhD programmes in central universities. This support, to the tune of Rs. 5000 and Rs 8000 respectively plus a small annual contingency grant, was intended to be just enough for students to be financially independent from their families, who are invariably tapped as the primary source of financial support.

Various universities have different criteria in implementing the disbursement of these fellowships; while those with a relatively small research intake like Jawaharlal Nehru University and English and Foreign Language University have been able to give the fellowship to every enrolled student in every department, others like Delhi University have had to implement the award of this fellowship more selectively. But across the board, these fellowships have been disbursed only to those students who have been given admission by the rigorous selection procedures of each institution. Furthermore, there are a number of checks at every stage.

These facts are important given reports of the UGC’s initial assertion that the non-NET fellowship was being discontinued because of complaints about its misuse. Although the UGC did not elaborate on this throwaway remark, it is worth asking how and at which level the alleged misuse has been identified, and whether students are in fact to blame? If every step of the award of the fellowship goes through the functionaries of the university, the alleged misuse would have to be located at that level rather than the students, and it is the university that must be taken to task, rather than the whole scheme being discontinued.

It is also worthwhile noting here that the CSIR has made no corresponding announcements with respect to the non-NET fellowships it itself disburses. Furthermore, given the varied sources for studies in science and engineering, there is no doubt that overwhelmingly, a withdrawal of the non-NET fellowship will be felt most in students’ research in the humanities and social sciences.

The force of the students’ protests, and the support that this has received from the teaching community, has put the UGC on the back foot. By all the indications thus far, the UGC had decided on 7 October to meet the students’ demand for a raise in the quantum of the research support with a discontinuation of the scheme from the next academic year. Although the immediate rationale for this discontinuation was the slash in the Union budget for higher education by about 25% from the previous year, there is also a larger imperative at work — the commitment to open higher education to trade as a service in the WTO-GATS negotiations slated to take place in December this year.

Under UPA I, at the WTO-GATS negotiations in 2005, the Indian government had already made an ‘offer’ of opening up the higher education sector to the international education trade. Final negotiations on this, and other offers relating to tradable services, are to be made at the Doha Round, in mid-December 2015, whereupon these offers shall become commitments. If India persists with its offer in this meeting, Indian policy on higher education will be altered forever.

By this commitment, India will transform students into consumers required to pay service charges to receive virtually any form of higher education, ranging from correspondence courses to instruction offered by universities and institutions established by foreign and private players. Furthermore, under the provisions of the WTO, India’s education policy would be reviewed annually by the Trade Policy Review Mechanism (TPRM), one of the legal instruments under WTO, which has the right to ‘suggest’ the changes needed in the Indian policy to ‘free’ up the market and create a ‘level playing field’ conducive to the sale of what was once a public good. Affirmative action policies like reservations, financial support to various categories of consumers, i.e. students, indeed even the right to protest and unionise, will not fit in with these proposed plans.

Teachers and students organisations across the country have consistently condemned the decision of the Central government to open up India’s highest education sector to GATS since 2005, but this opposition did not make a whit of difference to the UPA regime. The BJP appears more than willing to go down this disastrous neo-liberal route blazed by the UPA.

The disingenuity of MHRD

It is in this context that the press release by the Ministry of Human Resources and Development on October 25 must be considered. Ostensibly issued with the intention of allaying students’ fears about the non-NET fellowship, this notice should cause much greater consternation than it has, and much further beyond the fact that it was issued after a tete-a-tete with the Akhil Bharatiya Vidyarthi Parishad and not the genuinely protesting students.

At the outset, the release willfully misrepresents the reason why the students were protesting by stating that there will be no change in “existing and continuing fellowships”. Since this assurance was already given at the time of the initial UGC announcement, and the mass student protests have always been about the withdrawal of the scheme from the next academic session for new students, this is no assurance at all. Far more importantly however, this press release announces the establishment of a government “Review Committee to go into the issues related to the research fellowships provided by the UGC, covering both NET and Non-NET fellowships.” Putting aside the MHRD’s ignorance of the fact that there is nothing like a “NET fellowship” for the UGC, this release actually amplifies the range of fellowships under review. The mere institution of a review can hardly inspire confidence.

It is for these reasons that even despite the attempts by the MHRD, ably assisted by the ABVP, to mislead the Indian public about the issue, students across India are continuing their protest, with an outpouring of support from teachers. To support the protesting students and teachers is to truly bat for India.