From schools to intermediate colleges to universities, the education sector in Telangana has been suffering from meagre funds and lack of responsible functioning for long. 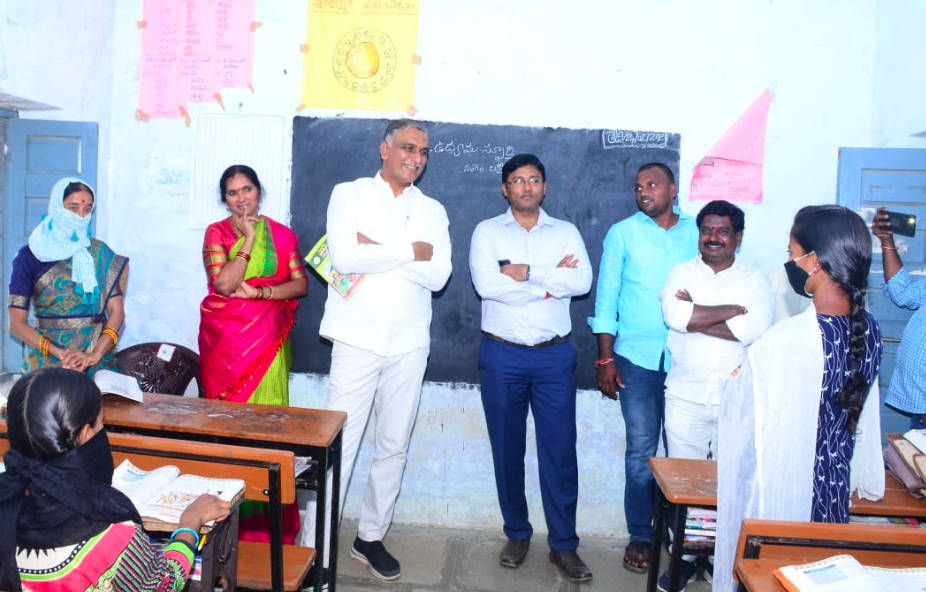 Hyderabad: The trend of dwindling allocation to education has continued in this year’s Telangana budget as well.

In the budget presented by the finance minister T. Harish Rao recently, the state government earmarked a paltry 6.78% for education.

This has been the trend since Telangana was granted statehood in 2014. In comparative terms, this year’s budget for education is little over half of what was allocated for the sector in 2014 by the Telangana Rashtra Samithi (TRS) government.

A proportionate allocation in line with the 2014-15 budget would peg it at Rs 23,000 crore. Any negligence on this front would be detrimental to the economic progress of Telangana.

“Ideally, in line with the off-quoted Kothari Commission report, the state should allocate 30% of its budget to education,” said K. Venugopal, chief editor of the magazine of the Telangana Progressive Teachers Federation.

The additional allocation of Rs 2,000 crore is part of the Rs 4,000 crore announced for the revamp of the physical infrastructure of schools over the next two years. The state has consistently allocated lower than the 15% average allocated by other states. On average, the united Andhra Pradesh, prior to 2014, had allocated 14% of the budget for the sector.

“The fall in allocation is in keeping with the tendency to withdraw from the social responsibility of providing education,” said Chava Ravi, state general secretary of the Telangana United Teachers Federation.

Census 2011 had pegged the literacy of Telangana at 66.54%, much lower than the national average of 74.04%. The figures would be even worse if Hyderabad and its surrounding areas are not factored in. The fall in educational expenditure would mean the Telangana government’s slogan of free education for all “from KG to PG” (kindergarten to post-graduation) would remain a mere slogan. The Centre has also reduced its budgetary allocation for education from 3.02% to 2.7%.

A. Narsi Reddy, an MLC representing a teacher’s constituency in the state assembly, while welcoming the additional Rs 2,000 crore allocated towards improving infrastructure in schools seven years after the formation of Telangana said, “To meet the infrastructure requirements we need Rs 10,000 crore – Rs 5,000 crore per year for existing schools. The higher education sector is in a bad state and needs Rs 1,000 crore per year.”

In the pandemic-hit academic year, just 15% of the students are estimated to have availed themselves of online education while 40% took classes digitally through the television. The percentage of those who attended these classes fell from 80% to 70% for digital classes in the period of the first month of the lockdown. “Many students had access to the Doordarshan channel but not the T-SAT channel where the majority of the classes were taught,” Ravi said.

Commenting on the callous attitude in providing a clean environment in the wake of the outbreak of COVID-19 in schools, Ravi said after schools reopened for classes 6, 7, and 8, the government failed to pay any honorarium to staff tasked with sanitation duties. These arrears alone amount to Rs 70 crore across various schools over the academic year. “The state government is averse to even providing Rs 15 crore to Rs 20 crore for temporary sanitation staff, to be paid for the remaining three months of the academic year. The overworked panchayat staff have been given this additional burden and they are cleaning the schools once or twice a week,” he said.

The recruitment of teachers is another dismal picture. The notification was issued for 8,792 posts in 2017, and the high court of Telangana had to intervene to ensure that the government held the teacher recruitment test in February 2018. The appointment of teachers, through this test, which started in July 2019 is yet to be completed, as 250 candidates who cleared the test are yet to be recruited as court cases are pending.

There are around 7,000 vacancies for teachers to be filled. On average, there are one and a half to two vacancies in every school. Even the 16,000 para teachers, also known as Vidya Volunteers, recruited to handle teaching responsibilities, have not been called in to teach. Following the outbreak of the pandemic, and the need to follow social distancing norms, headmasters are finding it difficult to hold classes.

The state of Telangana has 2.5 lakh teachers who eke out their living teaching in the nearly 15,000 schools. Most teachers say they have been left to fend for themselves and have had to resort to selling vegetables and take up manual labour as schools have been closed and many of their salaries unpaid.

“We took to the streets and held dharnas before the assembly, Pragati Bhavan (Telangana chief minister’s residence) and before the MLA quarters. A black day was also observed on Teachers Day. We held a silent protest on Gandhi Jayanti. Such programmes were held across the state before the Collectorates,” said Sheikh Shabbir Ali, president of the Telangana Private Teachers Forum, which claims to have 63,000 teacher members.

Even as the teachers agitated for payment of salaries during the lockdown, media reports suggested some schools were forcing parents to shell out a full fee. Even after they reopened, corporate schools like Narayana and Chaitanya have been paying only 30% to 40% of teachers’ salaries.

Some of them are even paying Rs 300 on an hourly basis or a one-time amount of Rs 5,000 to Rs 6,000 for the remaining period of the three-month academic year. “The government hasn’t even asked the private managements to pay our salaries. There has been only one teacher recruitment drive since the formation of Telangana. Around 30,000 vacancies of teachers’ posts exist across all schools in the state,” said Ali.

Apart from issuing orders in line with the Central Epidemic Act, the state government has washed its hands off the responsibility, said K. Madhusudhan Rao, general secretary of the Telangana Lecturers Joint Action Committee.

The JAC consists of six organisations representing 1.5 lakh lecturers teaching intermediate students in the state. “Even now 90% of teachers are on the roads. Teachers who were at the forefront of the Telangana agitation have been especially targeted by the managements hailing from the Andhra region. The government turned a blind eye and has not implemented its own GO 45 (Clause 14) regarding payment of salaries by private establishments during the period. Our agitations failed to move the government or the managements,” added Rao.

Parents have had to knock on the doors of the high court seeking implementation of GO 46, reining in the schools from increasing fees and charging only the tuition fee on a monthly basis. The confusion continues. Apart from asking people to call 100 and lodge complaints, the chief minister has steered clear of the issue. 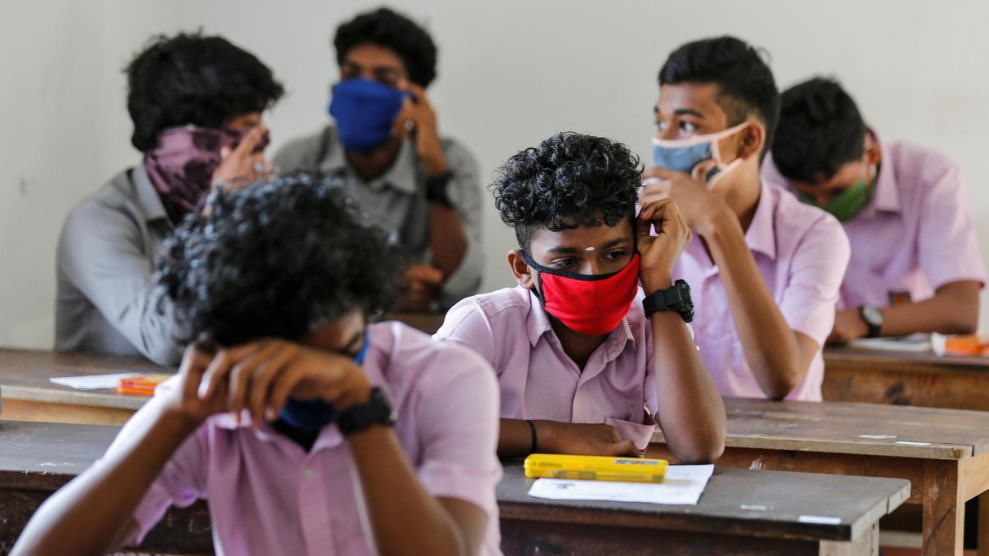 Representational image. Students wearing face masks wait to sit vocational higher secondary education exams that had been postponed amid the pandemic, inside a school in Kochi, May 26, 2020. Photo: Reuters.

Teachers’ unions say nearly 31 of them have died by suicide in the state since the lockdown was announced.

Commenting on the continuing neglect of allocation for higher education, B. Manohar, president of the Osmania University Teachers Association said, “Osmania University had received Rs 343 crore in the last year’s budget and Rs 353 in the current budget. The slight increase will be enough just to pay salaries. This is the situation across the universities.”

All the public varsities under the aegis of the state government together have received Rs 551 crore. The newly formed smaller universities have failed to take off due to lack of funds, Reddy says.

Of the 1,268 sanctioned teaching posts in Osmania University, there are now just 415 on a permanent basis. Recruitment of teachers will take time and some 36 teachers are set to retire this year. The process is fraught with difficulties as the roster was not followed while taking on teaching staff on contract. Some of them have worked for 15 to 20 years now. They outnumber the permanent faculty and any talk of recruitment as per a roster will be preceded by their demand for permanence.

The trend of owners of private universities joining politics and becoming legislators through the legislative council continues with the incumbent MLC P. Rajeshwar Reddy, who owns the Anurag University. TRS has fielded him for the second time in a row and he has won in the just-concluded MLC polls. The efficiency of the private varsities came under a cloud when Malla Reddy College of Engineering was blacklisted for five years owing to misrepresentation of information while applying for National Assessment and Accreditation Council (NAAC) ratings. The college is part of the Malla Reddy group of institutions owned by the Telangana minister for labour and TRS leader, C.H. Malla Reddy.