The Dangerous Myth of the Student Loan

The unfortunate truth is that education loans are like a bandage holding together an increasingly fragile higher education system. 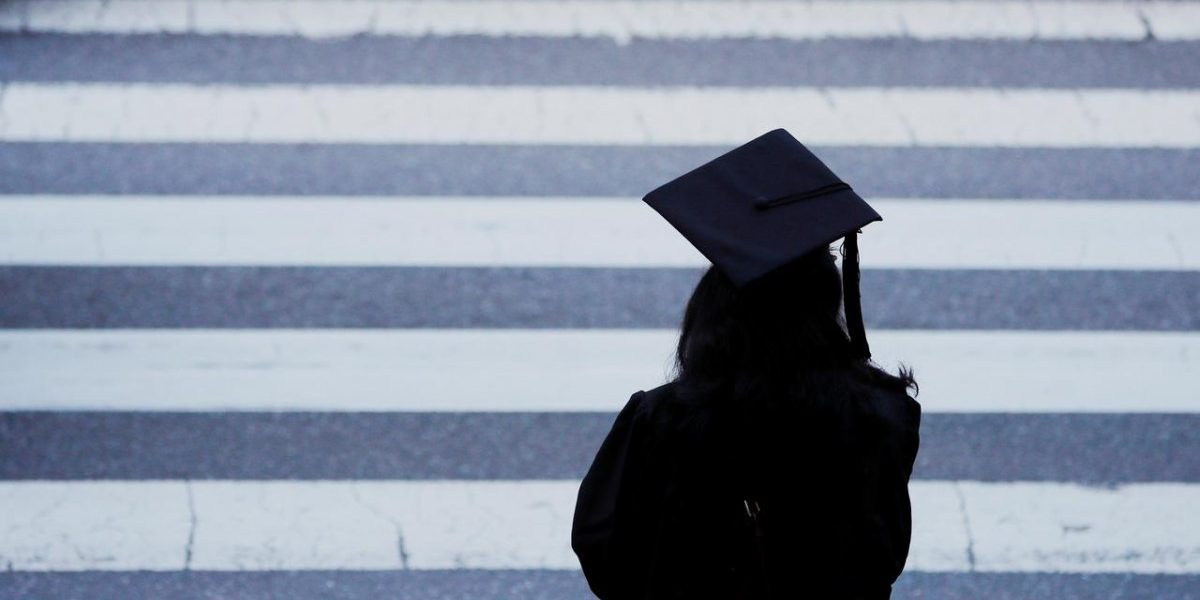 A graduating student waits to cross the street before Commencement Exercises at the Massachusetts Institute of Technology (MIT) in Cambridge, Massachusetts, US, June 7, 2019. Photo: Reuters/Brian Snyder/File Photo

The recent protests at Jawaharlal Nehru University have ensured that India has finally entered into the larger global conversation regarding rising university costs and the affordability of higher education. With students unable to afford to pay rising tuition costs out of pocket and governments unable to provide the public funds necessary to have a meaningful tertiary system, a question is repeatedly asked:

“Why not just take out a loan?”

Indeed, education loans are seen as a magic solution to the education funding crisis, a sort of bridge between accessibility and sustainability. The unfortunate truth is that education loans are more like a bandage holding together an increasingly fragile system that is globally experiencing a flight of public capital at precisely the time when public higher education investment is most needed. Even if one chooses to ignore the philosophical issues of student loans, there are ample global lessons to suggest that a loan-based education system is not a system at all.

The inner workings of the student loan

Globally, education loans have existed in some form or another for ages, but the origins of a widespread systematic government-led initiative can actually be traced back not to the US, but to ICETEX, a Colombian institution set up in 1950.

In the US, the groundwork for the present loan-dominated system goes back to 1972 with the Student Loan Marketing Association, which was created with the intention of servicing federally insured loans. By 1986, a market-based credit system was the system of choice for the World Bank, which advocated it in order to fund the rapid gap in higher education demand and supply that was occurring in the developing world.

India’s own experiences with government-backed loans date back to the 1962 National Loans Scholarship Scheme, which was eventually replaced with the current system of commercial bank-driven loans.

Also read: How Much Does a College Degree Matter for One’s Life Chances?

Structurally, higher education loans are of two broad types. Traditional, mortgage-style loans have a fixed tenure and interest rate in order to ensure minimum loan defaulting. Income-contingent loans require payments only when a student starts earning above a certain income level so as to reduce the burden on students. Which approach is adopted depends largely on government policy and country-specific requirements.

The case in favour of education loans is deceptively simple. Governments with constrained fiscal budgets can’t afford to pay the full cost of higher education institutions, especially when primary and secondary education are seen as having a higher social return. On the other hand, expecting parents to pay for higher education costs would perpetuate educational inequality: only richer families would be able to afford the entire higher education cost. Loans therefore seem to provide an easy solution: the burden of paying for their education would shift to the students themselves, or rather to their future earning potential.

The devil in the details

First, there’s the problem of how student loans affect those who need it the most: the poor and marginalised. Aside from the usual (albeit significant) concern of poor and marginalised students having a tougher time getting a loan in the first place, there are other economic and structural issues that lead to their victimisation by the student loan system.

Counterintuitively, smaller individual student debt is actually linked to higher rates of default and longer periods of payment, while larger loans (usually given for professional courses) are usually paid off more quickly. This is because recipients of smaller loans are usually correlated with lower incomes (albeit still being better off than had they not received the higher education).

At the same time, lower-income students are more likely to take smaller loans, either due to a lack of collateral or because of the psychological and financial burden of a loan on their families, and thus stick to courses which earn them less income. Those who come from backgrounds with existing family money are able to use that to either supplement their loans, pay them back more quickly or even skip needing them entirely, thus exiting the debt trap. This debt-income link thus maintains the wealth gap, rather than reducing it.

These issues seem to occur not just in the US and its predominantly traditional-style loan system, but even in income-contingent loan systems like in the UK. The citizen’s march from Mandi House to Jantar Mantar in solidarity with JNU students, in New Delhi on November 23. Photo: Akhil Kumar

Then there’s the issue of sustainability. The entire structure of a loan-based system hangs on the assumption that recipients will have better paying, secure jobs in the future. If the jobs don’t pay well enough, then loan repayments can’t be made. If the lack of well-paying-jobs is widespread, then the size and number of loan defaults increases to the point of economic collapse.

This exact crisis threatened to topple the Chilean government in 2011, and is threatening to do so again. In 2005, the Chilean government established the Crédito con Aval del Estado (CAE), a system of private loans backed by the government (as private appetite for student loans was lacking) to cover education costs particularly for the roughly 50% of students studying in private universities. The first wave of students to graduate from this system found themselves unable to secure jobs that paid well enough: The average debt-service ratio (or monthly loan payment divided by monthly income) was 18% (compared to a US value of 2.9%) and loan default rates reached around 36%. Massive student protests soon followed. The 2019 protests, while sparked by a hike in public transportation costs, are similarly linked to the debt trap most students find themselves in due to a lack of jobs to pay off their student loans.

Finally, there’s the issue of the perception of higher education’s impact on society.

One of the major contributors to the general withdrawal of public funds from tertiary education in the 1970s onwards was the notion that higher education was a private good; unlike primary and secondary education which were almost universally recognised as requiring state funding, tertiary education was seen as primarily benefiting the direct consumer (the student). This picture of universities grew, thus strengthening the narrative that students should find a way to pay their own way through. Loans became a proxy way to do so, as ultimately the net burden (even accounting for the tax deductibility of many student loan payments) is born by the students themselves.

Also read: ‘Jasn-e-JNU’: What Lies Behind the Calls to Dismantle Public University Education?

This is not the 1970s, however. Enrolment rates in higher education are continually increasing. At the same time, a secondary education is increasingly not enough to secure any job, let alone well-paying jobs. The looming threat of the fourth industrial revolution, which brings with it both the spectre and promise of increased automation and technological transformation, will inevitably hasten this process of secondary-sufficient job-loss.

Reports by the ILO, World Bank and World Economic Forum all advocate various forms of “skilling,” many of which fall within the realm of higher education. If the work paradigm is shifting so drastically as to practically necessitate some form of higher education, why should it then be privatised? And why then advocate a loan-based education system, which is at its heart a system of privatisation of the costs of education?

These issues are already creeping into India. Reports by CRIF as well as CARE Ratings suggest that while both the total number of loans and the number of loans below the Rs 4 lakh no-collateral limit have decreased, the absolute value has increased; effectively, larger loans for more expensive programmes with better guarantees are being preferred at the cost of those in the priority-sector-lending categories. Similarly, the recent layoffs in the IT sector should give anyone who assumes that STEM courses are “gilt-edged” a reason to think twice. In that same spirit, the assumption of increasingly more abundant and better jobs seems less and less realistic the longer that the current economic slowdown lasts.

There’s often a cognitive dissonance within India that is difficult yet necessary to overcome when thinking about student loans at a systemic level, simply because of how many individual success stories we hear. The education loan is so often sold as a ticket to success, and it can be: In specific individual cases, and given certain conditions, education loans can be transformative. To assume that this success can scale up to a national system, however, is a mistake that thankfully is yet to actually become reality. The United States has only just begun to recognise this fact, with major Democratic candidates including Senators Elizabeth Warren and Bernie Sanders both making student debt reform a key platform. For India, finding an alternative path to sustainable and affordable higher education will be difficult, but necessary.

Karthik Manickam is a research scholar in the Centre for Economic Studies and Planning at JNU, and is currently working on higher education financing and global trends in privatisation.