More students are seeking loans because of the rising costs of education, especially since many more of them attend expensive private institutions than before.

A classroom in Mayo College, Ajmer. Credit: endymion120/Flickr, CC BY 2.0 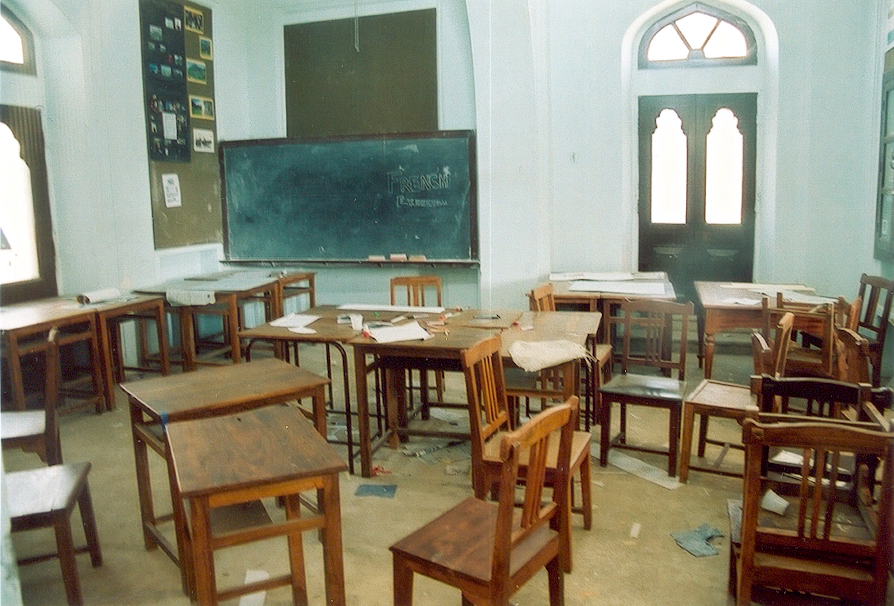 A classroom in Mayo College, Ajmer. Credit: endymion120/Flickr, CC BY 2.0

If you look at public loans for higher education, they were about Rs 300 crore in 2000. Now they are Rs 72,000 crore, the fastest-growing NPAs (non-performing assets) in the banking system. Basically, these moneys go to private colleges, many are run by politicians, teaching rubbish and in the end, the public sector will pay in any case. There will be a lot of pressure to write off loans. They did serve a good purpose in making education accessible to a large number of students. But it is not clear if democratisation of mediocrity will serve our society well.

Devesh Kapur, Director, Center for the Study of Contemporary India, University of Pennsylvania, to The Hindu, July 26, 2017.

According to a recent report, the total non-performing assets (NPAs) in the education sector registered an increase from Rs 2,615 crores in March 2013 to Rs 6,336 crores in December 2016. That is, Indian banks saw a 142% increase in student loan defaults during a period of just over three years. In percentage terms, the share of NPAs increased from 5.40% to 8.76%.

What are we to make of these numbers?

To begin with, the larger issue of the increase in student loan defaults is worrisome. Until recently, student debt and growing loan defaults were considered to be an American problem, where 44 million borrowers owe $1.3 trillion in student loans. It has been reported that a record number (~8 million) have given up paying on more than $137 billion in education debts. This situation has come about due to the rising costs of education, high dropout rates and a labour market where many fresh graduates initially only find low-paying jobs for relatively long periods – sometimes for far too long – and thus cannot start repaying their loans.

Over time, the problem spread to the UK, where the student debt now stands at £100.5 billion ($132 billion). According to one study, about 70% of students who left university in 2015 are not expected to finish repaying their loans.

The problem of growing student debt and loan defaults may have already arrived in India. With high actual loan defaults and the likelihood of worse to happen becoming a feature of high income countries with robust higher education systems, the signs are ominous for India, where the higher education system is broken and degreed but unemployable young people are mass-produced by the hundreds of thousands. It therefore becomes essential to understand the drivers of the increase in student loan defaults in order to address the problem before it overwhelms us.

It could be that student loan defaults have increased significantly simply because there are many more students attending college today than were five or ten years ago.

Student numbers have increased due to population growth and, more specifically, India’s demographic profile; the common belief that a college degree improves one’s life chances; and the government’s push to improve the gross enrolment ratio (GER).

At the same time, more Indians are seeking college education because they feel it improves their life chances. The government is also making efforts to nudge more young people to colleges based on the belief that their education will benefit the nation’s economy. As a result, the current GER of 24.5% (2015-16) is expected to increase to 30% in the coming years and, with it, the numbers of students as well.

Notably, there has been a substantial increase in the numbers of first-generation and low-income students. Because of the rising costs of education, such students have to depend heavily on bank loans to earn their degrees. First-generation and low-income students perhaps contribute disproportionately to an increase in loan defaults because they are likely to borrow with unrealistic expectations about post-graduation employment opportunities. Lacking sufficient information and social networks in the knowledge sector and related areas, all they get for their money at most higher education institutions in the country is a degree that usually leaves them unemployed or at best underemployed. The end result is a loan default.

The 2016 T.S.R. Subramanian Committee Report on a ‘New Education Policy’, and others before and since, have drawn attention to the uncontrolled and rapid privatisation of higher education. According to one estimate, between 2000 and 2015, almost six new colleges – mostly private ones – were set up every day. The private sector accounts for over 78% of all colleges, up from over 70% in 2010-2011. Some 67% of all students attend private institutions, up from 61% in 2010-2011. As the numbers of students enrolled at private institutions has increased, so have the numbers of loan seekers.

In sum, more students are seeking loans because of the rising costs of education, especially since many more of them attend expensive private institutions than before. With an increase in the numbers of borrowers, there is a greater probability that more students will default on loans. This is because the quality of education across India’s colleges and universities is poor and so are the employability rates of students graduating from such colleges.

The quality of education

Student loan defaults have increased also because India’s colleges and universities add little or nothing to the skills and knowledge of students so that they end up underemployed or unemployed. As the Subramanian Committee Report noted, most private institutions are nothing more than shops selling degrees:

“While there are a few (institutions) which can be identified as ‘Centres of Excellence’, both in the public and private sectors, there are a large number which are mediocre, some of them could well be described as ‘degree shops’.”

One could add that most public institutions are simply cheaper ‘degree shops’ than private ones.

The poor quality of education on offer at colleges and universities, whether public or private, is not surprising. India’s college education itself rests on a weak base of poor schooling. Many students who head to college are ill-prepared for the syllabus, and most colleges themselves are in no condition to do anything much – whether in terms of course content, quality of teaching, student guidance, infrastructure or anything else – for the students. Effectively, students learn little during their years in college either because they are incapable of doing so or because their teachers are inept and uninterested, or for some other reason.

Employability reports on college students and graduates present a grim picture. In engineering, the most sought-after degree over the last three decades or so, employability rates are rather dismal. An employability-focused study by Aspiring Minds found that barely 7% of graduates are suitable for core engineering jobs. According to a more recent and particularly controversial study by the same organisation, 95% of Indian engineers cannot code. In all fairness, the overall situation appears to be improving. According to an India Skills Report, employability has slowly increased over the past four years: 33.9% in 2014, 37.2% in 2015, 38.1% in 2016 and 40.4% this year.

Nevertheless, the current larger scenario is not promising. Unemployed and underemployed students can hardly be expected to be able to repay their loans. And if their numbers grow, so will student loan defaults.

The state of the Indian economy

Student loan defaults have also increased due to the state of the Indian economy. A broad consensus seems to be emerging that not enough jobs are being created. The term “jobless growth” is being thrown around on a regular basis and with good reason. According to the 2016-17 Economic Survey, “employment growth has been sluggish.” The unemployment rate in 2015-16 was 5% of the labour force, up from 4.9% in 2013-14, but a growing number of Indians entered the labour market during that period. The opportunities for young people appear rather limited given that a large number of college graduates also lack the knowledge and skills required by employers.

Some believe, however, that the situation is not as grim as is made out to be, certainly not beyond the short-term. According to Manish Sabharwal, “This jobs doomsday prediction is shallow, ahistorical and impulsive.” NITI Aayog vice-chairman Arvind Panagariya has emphatically rejected claims of jobless growth as a “bit bogus”, arguing that the economy cannot grow at the pace at which it is growing without adding new jobs and investment. Nevertheless, for the time being, those looking for jobs with the burden of student debt are finding the going harder. A loan default is on the cards for such job-seekers.

The problem needs to be addressed now than later

Public sector banks began to disburse education loans from around 2000-2001 after a push by former finance minister P. Chidambaram. Since then, with the active encouragement of the government, including measures such as paying off interest on student loans, banks have become more inclined to lend money to students for higher education. Interestingly enough, state-owned banks account for over 90% of educational loans. Over time, as the demand for loans has increased, so has the availability of loans, and they have become easier to obtain as well.

There is one last observation. The data on student loan defaults cited above are for a 90-day period, which seems too short to be understood as a serious kind of student loan default. This is because in difficult employment conditions like now, it may be difficult for even well-qualified graduates to secure decent and reasonably well-paid jobs quickly and they may choose to bide their time. During that period, unless a graduate belongs to a relatively affluent family, she is likely to ‘default’ on the student loan based on the 90-day limit. However, she is also likely to be employed after six months or perhaps a year and can then start paying the loan back.