Rethinking the Idea of a Nation Requires New Sensibilities, Not Bookish Knowledge

Children learn the harsh realities of hierarchy, stratification and class division not through books, but through everyday experiences. Do any of them ask: for whom does the nation exist? 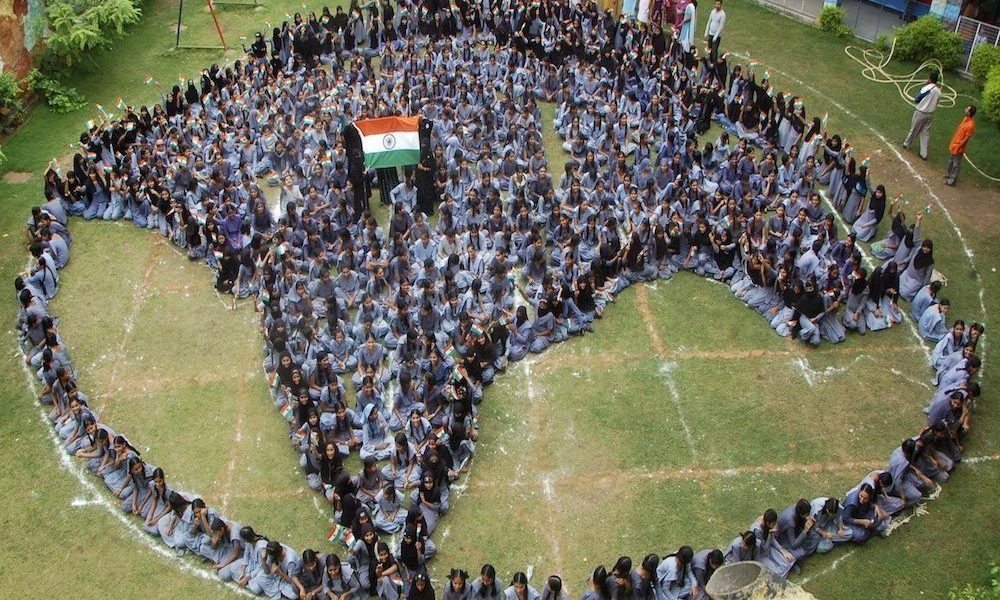 Think what would happen if, instead of the compulsive ritualisation of the national anthem, a teacher asks students to read a short story by Manto or a poem by Muktibodh. Representative image. Credit: Reuters

The Kendriya Vidyalaya in our locality is not far from my university residence. Every morning as I take my tea and look at the newspaper, the echo of the national anthem – a wonderful gift from schoolchildren – envelops my being. Yet, at this very moment, an anxiety begins to overcome me. Is it merely a school ritual – a disciplinary practice? Or are there teachers who engage with these tender minds, and make them understand the meaning of being part of a nation?

I am anxious because the very idea of nationalism is paradoxical. While it is capable of arousing feelings of love, togetherness, inclusiveness and service, it can also invent ‘enemies’ and sanctify some sort of a militarised consciousness for the ‘protection’ of the nation. History bears testament to the many wars and mass atrocities that have taken place in the name of the nation. While Tagore’s Jana Gana Mana arouses positivity and a feeling of sublime prayer, the routinisation of a ritual in a highly mechanised school assembly – and that too in a time when political authoritarianism, militarism and nationalism go together – I am afraid, might miss it altogether.

Seeing the nation through children’s eyes

There are many perplexing questions that confront the mental landscape of children. Every morning as they start their journey towards school, they see a terribly fragmented nation – a nation that reproduces gross inequality through stratified schooling. While air-conditioned buses take well-dressed English-speaking children to all sorts of ‘international’ schools, visibly malnourished faces move towards municipality schools.

Instead of ‘common schooling’, children learn the harsh realities of hierarchy, stratification and class division not through books, but through everyday experiences. Do any of them ask the question: for whom does the nation exist?

They see that not everyone is treated equally in the classroom. It is not surprising. After all, teachers don’t come from a different planet, and some of them carry the baggage of violence and exclusion rooted in our society. It is not impossible to find the traces of a patriarchal or casteist mind, nor is it impossible to see the impact of a communal mind that stigmatises ‘others’ based on religious identity.

Does the teacher’s gaze objectify, humiliate and differentiate a child with a ‘problematic’ identity – a Dalit child, a female or a Muslim child? As ethnographies of schools suggest, this violence – call it cultural, psychic or symbolic – has not yet disappeared from schools. Do the children seek to ask a question: why is the nation so insensitive and violent?

Also read: For Sake of Protecting the Idea of a University, JNU Teachers Must Rise

It is not impossible for them to think (even if they can’t verbalise it all the time) that the nation, far from being egalitarian, privileges certain kinds of cultural and intellectual capital at the expense of others. What else do they see at schools? Knowledge, they realise, is merely bookish – a chapter on the Newtonian law of gravitation, a note on the downfall of the Mughal Empire, or a set of puzzles on trigonometric equations.

Here is a system that doesn’t unite the mental and the manual, books and the world, or intellect and practical wisdom. Look at a typical mode of evaluation that exams generate: Mathematics-96, English-99, Hindi-84 and, History-92. It has no scope for appreciating other forms of capital – whether a child knows something about farming, whether she can milk a cow, or whether she can swim and save a man drowning into a river.

No wonder, children – particularly those who get labelled ‘failure’ – may feel like asking: does the nation degrade labour, and promote elites and intellectuals separated from common folks’ knowledge?

Are there teachers to entertain and understand these questions? Can they see beyond the ritualisation of school assemblies, the invocation of ‘Bharat Mata’ and all sorts of disciplinary practices causing hierarchisation and normalisation? Such a challenging task merits reflexive and inspiring teachers: teachers who see immense possibilities in children, and love to be in communion with them, who encourage ‘problem-posing’ education and inspire students to overcome the silence imposed on them, and articulate their apprehensions, anxieties and confusions.

This means the willingness to rethink the nation and the discourse of nationalism. Where is the egalitarian and inclusive nation? What is nationalism? Does it mean merely following a school ritual, singing in tune with Vande Mataram and celebrating India’s victory over Pakistan in the cricket match? This requires new sensibilities – not bookish knowledge.

Imagine a situation. Instead of celebrating the surgical strike day, the teacher asks children to think whether India and Pakistan, despite their poverty, should spend excessively on the army, and neglect the real concerns of farmers, cobblers, or artisans.

Feel the moment if a teacher rescues Bhagat Singh from being reduced to a photograph in the principal’s office, and tells children how the nation we worship is negating his dreams and struggles for equality and collective emancipation. Think what would happen if, instead of the compulsive ritualisation of the national anthem, a teacher asks students to read a short story by Manto or a poem by Muktibodh.

What if when the principal dares to speak out that it is not only the prime minister who works for 16 hours a day, but that a construction worker in Delhi’s metro project or a peasant in a Himalayan village, too, works for that long – at times without even roti-sabji.

Who knows, one fine morning I might be surprised and hear the echo of yet another song – children singing of love, not war. Cosmopolitanism, not parochialism. Reciprocity, not meritocracy. Maybe even children speaking of people and not the fetish of the nation.