AAP's 'Each Child Can Read' Campaign Ups Proficiency, But Still Has Some Way to Go

The Delhi government campaign has built accountability in schools and motivated teachers to move away from the syllabus to address the learning deficiencies that their students have. 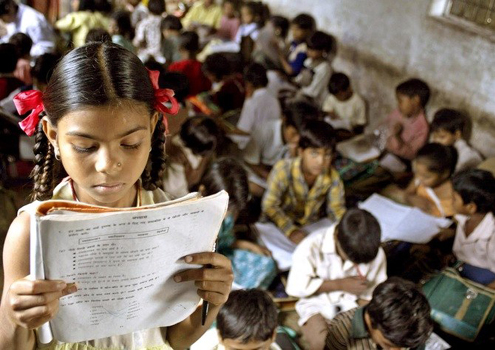 A school girl reads her book inside her class at a government-run school. Credit: Reuters/Files

New Delhi: In July 2016, the Delhi government conducted an assessment of reading proficiency for students from class 6 to 8, and was quite taken aback by the outcome. Only 4,53,526 students, who had scored less than 33% were being assessed ,as the others were assumed to possess basic reading skills. Of these students, only 22% managed to read their Hindi textbook while only 43% could read a paragraph, 14% could read a word, 13% could read only the alphabets and 8% could not even identify an alphabet.

This stirred the government and it had taken up the ‘Each Child Can Read Campaign’ for enhancing the reading ability of its students. According to Anurag Kundu, who works with the education department of the Delhi government and was involved in the design and implementation of the campaign, the drive has met with some successes but there is still some way to go.

The campaign was initially undertaken over a 35-day period from teachers’ day on  September 5 till Children’s Day on November 14. “It involved regrouping of the students on the basis of their reading ability, allocation of one teacher for every 30 students, training of the teachers to teach basic reading, daily supervision by the mentor teachers and the weekly reports of the progress.”

The structures thus instituted, built accountability in the schools, said Kundu, adding that they also “motivated the teachers who were tired of teaching the ‘regular syllabus’ despite knowing their students could not read, and improved the academic support available to the teachers.”

Closely monitored by deputy chief minister Manish Sisodia, the campaign was able to ensure that 97,157 more students were able to read advanced stories at the end of the target period. Post November 14, the assessments were carried under the supervision of the mentor teachers and  4,17,915 students participated in this exercise.

Kundu said three important findings emerged from the assessment. “Firstly, as a direct impact of this campaign, 97,157 more students could read advanced stories in Hindi as of November 2016. It means that the percentage of students who could read advanced stories jumped from 22% to 47% in a span of 35 working days. The percentage of the students who could read at least a paragraph or story also improved from 65% to 83%.” This, he said, was well over national average of mere 47% as per the Annual Status of Education Report (ASER), 2016.

Another important development, he said, was that “the percentage of students who struggled to read even a word declined from 35% to 16%. This is a remarkable progress in short period of time since.” However, Kundu admitted that the data for the 35,387 students (nearly 8%) was missing from assessment because they were absent on the earmarked days of assessment.

Which schools to focus on?

Finally, the assessment also brought into sharp focus the most poorly performing schools, enabling them to improve their learning levels. “The 200 worst performing schools have 35% of the city’s students who couldn’t read an advanced story. This has activated the department to undertake a series of academic reform measures,” said Kundu.

With only partial success having been achieved till November, the reading program was extended till February 2017 for those who struggled to read till November 2016. The gains of this second round of exercise are however, yet to be assessed. Kundu said “while no large-scale assessment has been carried out in February, the anecdotal evidence suggests that one more lakh students may have learned to read since November 2016.”

Understanding of subjects has also improved

As Kundu pointed out, apart from enabling over a lakh of students develop the ability to read advanced stories, the campaign has also empowered them to “understand their mathematics, social science and science content”. More importantly, it has instilled new confidence in and brought about substantial positive behavioural changes in the department’s officials, teaching fraternity and students.

Kundu said the exercise has also raised some very fundamental questions about how we should approach school education. “Firstly, this has raised serious questions about the design of our education department and its policies. Our schools are not designed to be academic institutions but are the local administrative units of what may be unfortunately but rightly termed as ‘Education Logistics Department’. It is time that the state governments focus on the actual processes of teaching and learning rather than merely ‘completion of syllabus’ without any regard for the child’s level, context and the need.”

Observing that this obsession for completion of syllabus emerges from Right to Education Act Section 24(2), which prescribes penalty in the event of the default by the teachers, he called for a relook at this provision.

‘No detention policy not to blame for the ills’

Asked if the no detention policy was to blame for promoting students without their even being understand the basic text, Kundu categorically said poor reading levels have nothing to do with this policy. “It is a product of two factors – because of Sarva Shiksha Abhiyan, there has been a surge of children whose parents had never seen schools. Since the schools earlier, by and large, taught the upper class and upper caste, the enrolment of first generation learners has brought the average down. Our schools aren’t prepared to teach these children.

Secondly, he said, the no detention policy has been wrongly understood as ‘No Teaching Policy’. “Evidently, there is a difference between the two,” he quipped.

The campaign, Kundu said, has also improved the morale of the students who till now found school uninteresting because the content taught in the classes didn’t acknowledge their learning deficit. “Now they find the classes more relate able since they are beginning to read and understand on their own the content that is delivered by the teachers. This has reinforced their belief in themselves.”

As for the teachers, he said, the campaign has reinforced their faith in their own ability to usher a change as in the past the spark they possessed was often crushed by the department.

Equally important has been the campaign’s ability to initiate a discourse around the learning of the students in a more serious and rigorous form. As Kundu said, it has compelled the officials and the teachers to collaborate more, review the curriculum, improve their capacity and make the classrooms more child-centric.

Helping out those most in need

While most projects tend to abandon the worst performers, Kundu said the most immediate outcome of the discourse is the launch of project ‘Smile’. Of the nearly 8% students of class six to eight who couldn’t even identify letters at the beginning of the reading campaign, about  2.5% still couldn’t identify the letters in November 2016.

Stating that this pointed to “a serious issue of learning disability in our students”, Kundu said, the project “Smile” is now aimed at “scientifically screening of the students suspected of learning disabilities and providing them individualised attention as well as support for enabling them to succeed in life.