Rajasthan Textbooks Will No Longer Call Savarkar a 'Brave Revolutionary'

The Congress is revising textbooks to undo some of the changes made by the previous BJP government. 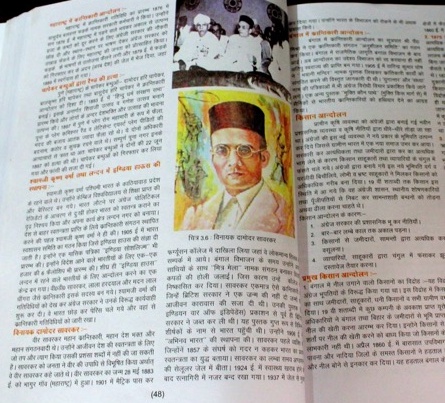 Vinayak Savarkar was earlier given a lot of space in the chapter on India's freedom struggle.

Jaipur: The Congress government in Rajasthan is all set to undo the changes made by the previous Vasundhara Raje-led Bharatiya Janata Party government in the state board textbooks. The government has decided to remove the reference to RSS icon Vinayak Savarkar as a “brave revolutionary”, and add details of his clemency application to the British.

With the BJP coming to power in the Centre in 2014, the Raje government had taken to glorifying the Narendra Modi government and propagating the party’s Hindutva ideology by altering the school syllabus.

The state board textbook for Class 10 had given significant space to Savarkar, in the chapter on India’s freedom struggle. He was mentioned as the “only brave revolutionary to be sentenced to two life terms of imprisonment and put in tireless efforts to stop partition”, sidelining Jawaharlal Nehru. In addition, no reference to Mahatma Gandhi’s assassination or the 2002 Gujarat riots was made in the books.

To glorify the Modi government, the textbooks talked about a number of the regime’s decisions – from demonetisation to the surgical strikes – and called them “historical”. No critical analysis of any government policies was offered.

Soon after coming to power in December last year, the Congress government had constituted a textbook revision committee. Now, the committee has recommended that the textbook be revised to include how Savarkar had asked the British for clemency.

Announcing that the committee’s recommendations would be included in the textbooks for the new academic session, state education minister Govind Singh Dotasara said on Monday, “The previous BJP government turned education into a laboratory of the RSS for its political scores. It went up to to glorifying people like Savarkar and Deendayal Upadhyay, who the Sangh has always looked up to. But based on strong evidences and facts, the committee has written that [it must include that] Savarkar had applied for clemency to the British.”

Former education minister in the state under the BJP regime, Vasudev Devnani, has called the move anti-Hindutva.

“After Maharana Pratap, the Congress government has insulted great patriot and freedom fighter Veer Savarkar by its anti-Hindutva mentality. The party idolising only one family has always shown such conduct about other great personalities,” he tweeted.