Former head of the curriculum committee says key stanza was censored from Rajasthan textbooks on the orders of the former BJP chief minister, who is from the Scindia family.

Jaipur: The latest compulsory Hindi language textbook Shritij for class 10 under the Board of Secondary Education, Rajasthan (BSER) has a paragraph missing from Subhadra Kumari Chauhan’s popular poem, Jhansi ki Rani, that stated that the then Maharaja of Gwalior Jayajirao Scindia supported the British.

This paragraph was, in fact, deleted by the previous Vasundhara Raje-led BJP government, as part of the decision of the curriculum committee appointed by the board. However, the Congress government, despite revising the curriculum in 2019, didn’t rectify the politically-motivated amendment in the poem.

Raje is a part of the Scindia dynasty that ruled the erstwhile princely state of Gwalior. In a bid to expand itself, the East India Company wanted to put an end to the rule of kings in India. The then Maharaja of Gwalior Jayajirao Scindia is said to have supported the British by accepting its defeat.

Poem on Jhansi ki Rani in the Hindi textbook for class 10.

The East India Company had introduced the Doctrine of Lapse that denied the right of adoption to rulers and subsequently, helped them annex their state on the grounds that it had no heir.

Following its policy, the British rejected the adopted child of Rani Lakshmi Bai, the queen of Jhansi, after her husband’s death but she refused to surrender her kingdom to the British and fought back. During the battle, Lakshmi Bai fled to Kalpi, near Gwalior, along with her forces and those of Tantya Tope. They defeated the army of Jayajirao Scindia and occupied his fort.

It is believed that Scindia betrayed Lakshmi Bai by intentionally providing her with a weak horse to escape. She was badly injured during this battle with the British.

The deleted paragraph reads as:

(Rani preceded further and reached Kalpi after taking a journey of hundreds of miles,
The horse got exhausted and fell on the ground, and died immediately,
On the banks of Yamuna, the Britshers were defeated by Rani once again,
The victorious Rani proceeded further and took Gawalior under her control,
‘Friend of British’ Scindia left the capital,
From the mouths of the Bundelas and the Harbolas (singers of Bundelkhand), we heard the tale of the courage of the Queen of Jhansi, who gallantly fought like a man against the British intruders).” 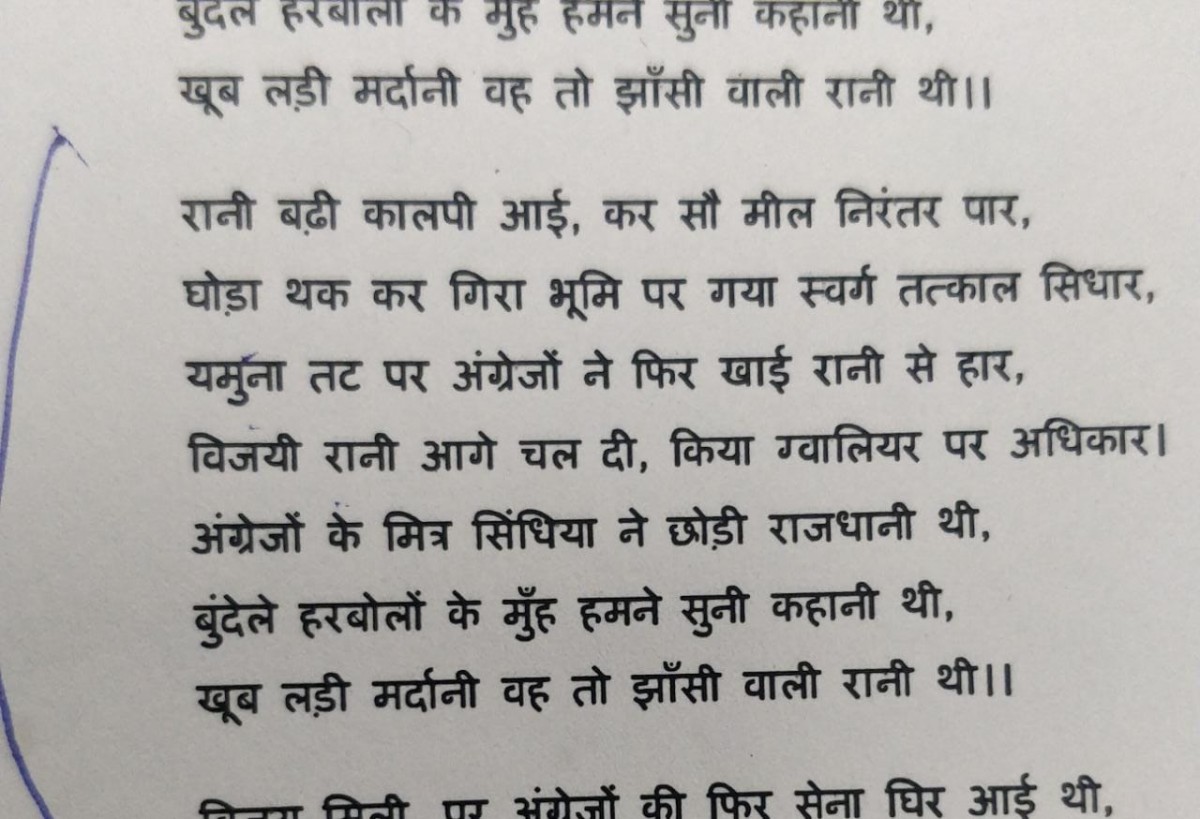 The deleted paragraph from the poem Jhansi ki Rani.

Based upon the inputs of this committee, a textbook production committee consisting of writers accordingly selects various compositions to be included in the textbook.

Soon after coming to power in December 2018, the Congress government had directed the curriculum committee to revise the syllabus, a standard procedure through which the new government reverses changes undertaken by the previous government.

Also read: The Chapters of History the Centre Doesn’t Want Students to Read

This committee took note of the glorification of Savarkar and Deendayal Upadhyay, whom the Sangh has always looked up to, included in the textbook during Raje’s tenure and recommended the inclusion of Savarkar’s plea for clemency to the British.

However, the committee didn’t act on the changes made in the poem on Queen of Jhansi.

Speaking to The Wire, K.S. Gupta, the former convenor of the curriculum committee for the subject of history said, “It is very well known that Raje belongs to the Scindia family and the lines from the poem criticising her lineage were removed on her orders.”

The former committee, that was appointed during Raje’s tenure, refused to accept any responsibility for changes made in the poem. “We only formulate the syllabus, weightage of each portion like the grammar and literature. It’s up to the textbook production committee to finalise which composition would be taken,” Ashish Sisodia, convenor of the curriculum committee, told The Wire.

Even, the convenor of the textbook production committee Shashi Prakash Chaudhary, under whom this book was finalised, had raised objections to the changes made in the poem. “I had not approved of any deletion in the poem. I’ve no idea how it happened. I wrote to the Textbook board expressing my objection and they replied that they cannot tell me about why they have done it,” Chaudhary told Dainik Bhaskar. 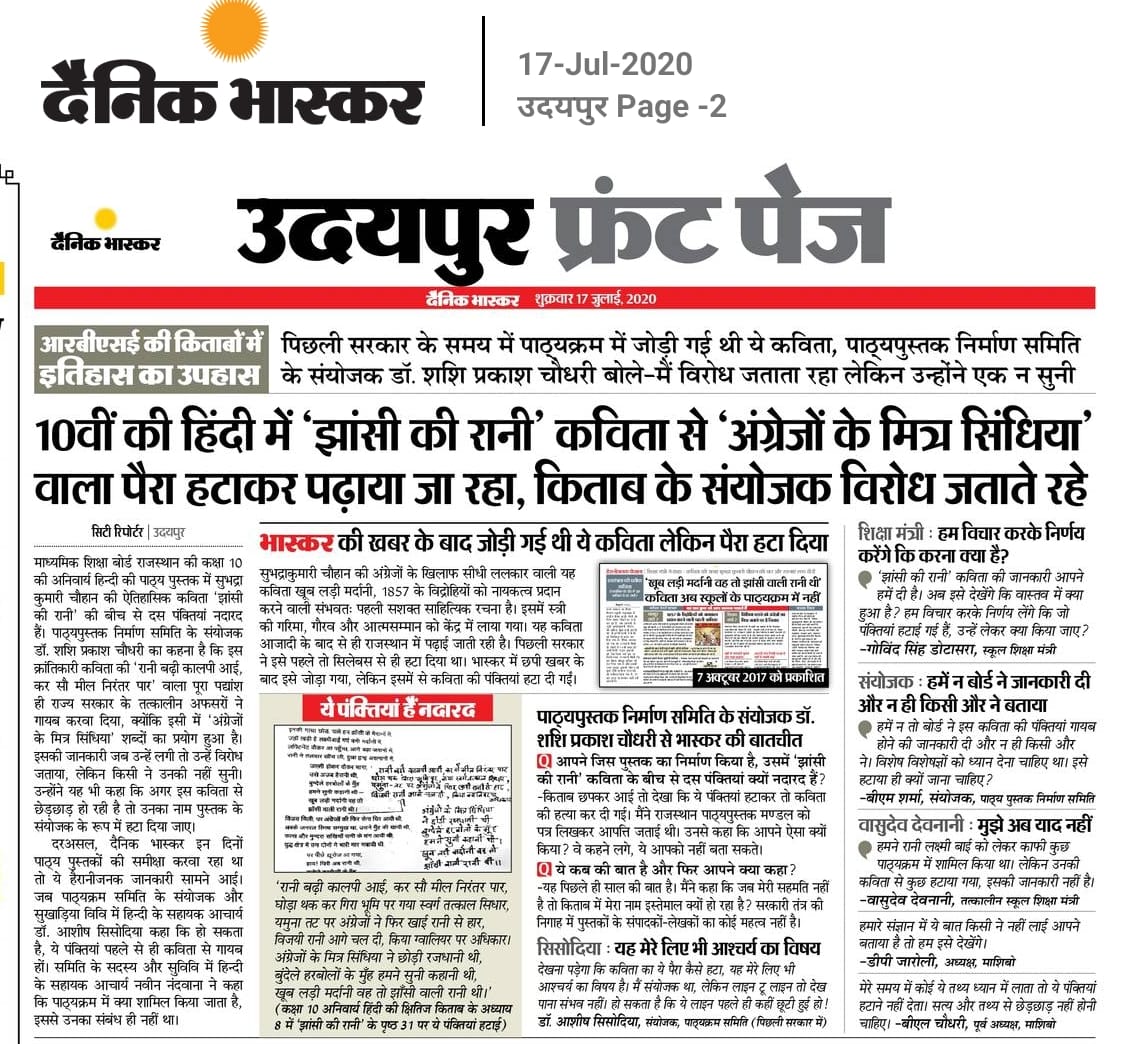 The Wire has reached out to Raje for a response and the story will be updated when she replies.

Under the Vasundhara Raje-led BJP government in Rajasthan, the history department of Rajasthan University included a book titled Rashtra Ratna Maharana Pratap by Chandra Shekhar Sharma which had declared Pratap the winner of the 1576 Battle of Haldighati against Akbar, in the list of recommended readings for the subject.

The class X and XII textbooks of the Rajasthan Board of Secondary Education were revised to glorify the Modi government and propagate the Bhartiya Janta Party’s Hindutva ideology.

The textbooks were revised to sideline Jawaharlal Nehru and Mahatma Gandhi and lay greater emphasis on Savarkar. The role of Congress in the freedom struggle was also shown in poor light claiming “elite Congressmen wanted to prolong British rule in India”. Years ago, the state education department had also eliminated the suffix ‘Great’ from Akbar’s name.