Khairabad's girls-only school has been chosen by the government to be transformed into an English medium school. Jaipur: People of Khairabad are protesting the establishment of an English medium government school in their village as it would mean that the existing girls’ school is converted into a co-ed.

In the remote village in Rajasthan’s Kota, many parents are not comfortable allowing their daughters to study with boys. “Many generations of girls in this village have attained education because there was a separate school for them, but if it is converted to a co-ed school, many parents will not send their daughters to school,” said Habib Noor, father of Ibadat, a class VIII student in the proposed school.

“This is a very conservative village. People object to interactions between girls and boys. Parents send their daughters to a girls’ school and ensure that they go only to those tuitions where boys don’t come to study,” added Noor. About 50% of Khairabad’s population is comprised of Scheduled Castes, Scheduled Tribes and Muslims

Hemlata has four daughters, three of whom study in the Khairabad’s girls’ school. “Until Class V, they had studied in a co-ed school because they were kids. But from Class VI, during their teenage years, a girls-only school is best for them,” she said.

She claimed that even her daughters don’t want to study with boys. “My youngest daughter was about to take admission in the [girls-only] school this year, but after hearing about the conversion of the school to a co-ed, she now says she doesn’t want to join.”

Khairabad’s residents have written a letter to the chief block educational officer (CBEO), saying the government’s proposal is not acceptable to them. They said that in the past, they had already requested the officer not to nominate this school and he had even assured them it would not be. The letter says around 230 girls are currently enrolled in the school.

“After a lot of struggle, this girls’ secondary government school [up to class X] was upgraded to higher secondary in January this year. With that, we had hoped that our daughters would now be able to complete their education till class XII. If this school no longer remains a girls’ school, then it may be a possibility that most of the girls will drop out, which is not good for their future,” it adds.

As per the guidelines issued by Rajasthan’s directorate of secondary education in January this year, the CBEOs were requested to nominate schools in their areas to be converted into ‘Mahatma Gandhi Government English Medium Schools’.

The village head of Khairabad alleged that the CBEO sent the nomination without consulting them. “The  guidelines of the Mahatma Gandhi English medium school provide that the school should have better infrastructure in terms of laboratories, playgrounds and other such things. This [school] building was renovated by the financial contribution of local philanthropists. The officer noticed the infrastructure and nominated it,” said Hemendra, husband of Khairabad’s sarpanch Sushila Sharma who manages the panchayat work on her behalf.

“There is an old building of the government school in Khairabad which the government could have selected and built its own infrastructure there. But it selected the already furnished school,” he added.

Speaking to The Wire, Anirudh Sharma, Khairabad’s CBEO said, “They might have requested [not to nominate the school for transformation] but it’s a government school and the decision is up to us. The English medium school will be opened there only and the last date for admission is also over now.” 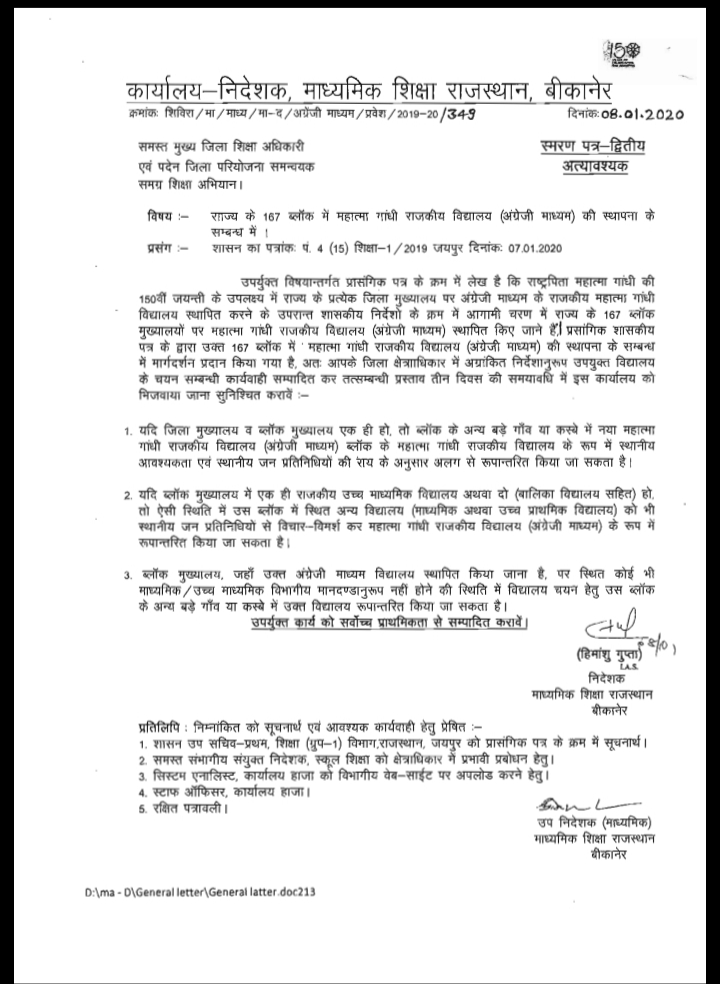 Order of the state goverment regarding transformation of government schools into english medium schools.

Since the guidelines provide that recommendation from an elected member in the region could be submitted as a nomination, this policy has taken political colour in many parts of the state. The local MLAs are attempting to use it to take credit for setting up an English medium school in villages. Due to this, the number of nominations from each block has increased, making it difficult for the education department to pick one.

“To avoid any controversy, the government selected the nominations that were first sent to it from the notified blocks. In the case of the Khairabad block, the girls-only government school was first nominated by the CBEO and that’s why it was taken up,” said Hemendra.

Another gram panchayat in the block, which had also nominated its school, has challenged the selection of the Khairabad school in the Rajasthan high court.

The Morak gram panchayat had nominated its higher secondary girls’-only government school through the CBEO and also attached a recommendation letter from the Bhartiya Janta Party MLA from the area Madan Dilawar. In its writ petition in the HC, the gram panchayat has alleged that the state government had arbitrarily selected the Khairabad school without considering other nominations.

The petition also added that the establishment of an English medium school in Morak gram panchayat would have benefitted 2,000 workers of the Mangalam cement factories who otherwise send their children to a private school that charges exorbitant fees.

“The high court has taken up our petition and issued notice to the state government,” Pradeep Mathur, advocate in the matter told The Wire.