Leading historians such as Irfan Habib, Aditya Mukherjee and Pankaj Jha say the syllabus distorts history and undermines it as a discipline. New Delhi: The University Grants Commission’s proposed history syllabus for undergraduate students has drawn criticism from historians for promoting unverified claims and a “racial theory” of history which is reminiscent of Adolf Hitler’s Nazi Germany with its focus on Aryans, The Telegraph has reported.

The syllabus’s focus on Hindu mythology and religious texts has led to many expressing fear of ‘saffronisation’ and ‘distortion’ of history through it.

“In the UGC syllabus, a major share is devoted to the Aryans. By claiming India was a homeland for Aryans, we are doing what the Germans did. Purely a racial theory is being imposed,” Habib said.

Habib added, “Hitler had this theory that the Germans are a pure race. What happened in Germany should be a lesson for us. A kind of false history is being put forth by the RSS and the BJP.”

Habib highlighted the lack of mention of the caste system and the social reform movement of Raja Rammohan Ray.

Since the Modi government came to power at the Centre, it has repeatedly tried to change the curriculum in various ways, at great cost to academic freedom.

Among the suggested readings in the proposed history syllabus, works by well-known historians are missing, including Romila Thapar’s or R.S. Sharma’s books on ancient India and Irfan Habib’s books on medieval India.

The historical significance of the 20th century and modernity has also been severely diminished. While builders of modern India such as Mahatma Gandhi, Jawaharlal Nehru, Pandita Ramabai, Vallabhbhai Patel and B.R. Ambedkar have received less attention in the proposed draft syllabus, the rise of communalism in the early 20th century has also been relegated.

The syllabus has seen the inclusion of books by little-known authors, some of whom are “pro-Sangh”. According to Pankaj Jha, a history professor at Lady Shri Ram College, the proposed syllabus has challenged history as a  discipline. 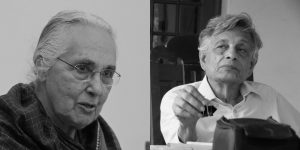 “The biggest problem is that you do not know who made this syllabus. The names of the syllabus makers are confidential. The idea of history as a discipline allows a multiplicity of views, based on verifiable information. All that is entirely ruled out in this syllabus,” Jha said.

The draft curriculum also endorses the “Indus-Saraswati Civilisation,” the origins of which are at best debatable.

According to C.P Rajendran, the existence of an Indus-like river Sarasvati linking the Vedic people to the Harappans has been challenged by a slew of research papers published in recent years, substantiated by refined satellite imagery, topographic analysis, and more concise dating techniques.

Historian Aditya Mukherjee has said that the power of the state is being used to develop an “imagined history”. He compared the current pattern of promoting sectarian ideology under the guise of history with what the British did to remain in power.

“The notion of permanent British rule was brought in. They (the British) tried to project themselves as if they were here to protect one community from the other. Their effort was to create divisions and rule. The idea of religion being the bearer of nationhood by the communalist parties helped the British,” Mukherjee said.