The Canadian government has provided relief to those students who had valid student visas and were in Montreal. The 502 students stuck in India holding a protest against the Canadian government and education consultants IDP and CANAM in Jalandhar on March 24. Photo: Kusum Arora

Jalandhar: Two months after they raised their voice against the sudden closure of three private colleges in Montreal, the Canadian government has provided relief to 1,173 students, mostly from Punjab, who were in Canada on student visas. Another 502 students though, who were studying online from India, have been left in the lurch.

In August 2021, the Canadian government had refused student visas to 502 students who were attending online classes from their homes because of the COVID-19 pandemic. All international flights were banned during this time.

Out of around 2,000 affected students, 1,173 resumed classes in the same three colleges – Collège de comptabilité et de secrétariat du Québec (CCSQ), College de I’Estrie (CDE) and M-College – this week, after they were taken over by another group. 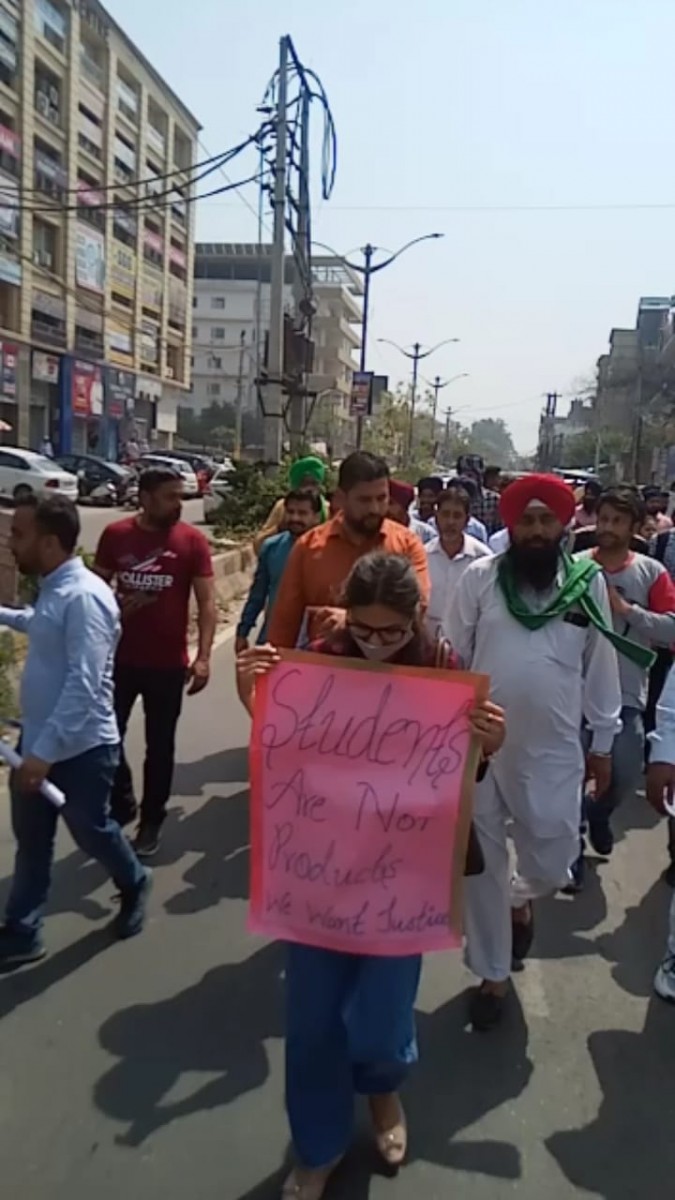 A student during the protest against Canadian government and education consultants IDP and CANAM, who got them admitted in the three colleges in Montreal, in Jalandhar on March 24. Photo: Kusum Arora

Meanwhile, the 502 students in India were given certain stipulations by a Quebec court. At the moment the students cannot, the court said, get a full refund. To be eligible for a refund, they will have to reapply to the same three colleges. If after reapplying, their student visas are refused again for whatever reason, they will not get the fee refund.

Following this crisis, 308 students of the approximately 2,000 have quit these colleges and moved to other cities like Winnipeg, Ontario and Vancouver in Canada through different immigration programmes.

Last year, the three colleges announced long winter vacations from November 30 to January 10, 2022. But before closing, the authorities asked the students to deposit pending fees within one week. This amount ranged from CAD 15,000 to 29,500, which comes to Rs 9 lakh to Rs 17.70 lakh approximately. While some students paid the fees, others could not. Following this, the students held protests in Montreal and approached Canadian MPs seeking justice.

The 502 affected students who are in India without visas came together under the banner of Indian Montreal Youth Student Organisation (IMYSO) and held a protest against Canadian government and education consultants IDP and CANAM, who got them enrolled in these colleges, in Jalandhar on March 24. They also handed over a letter to deputy commissioner, Jalandhar Ghanshyam Thori seeking justice.

Talking to The Wire, Nisha Rani from Moga district, who was pursuing online classes at M-College, said that while the students in Montreal have started attending classes, they were left with no option but to protest against the Canadian government’s decision. “It has been over eight months since we have been demanding a full fee refund or continuation of studies but there is no solution in sight,” she said.

Arguing against the court’s stipulations, she said, “The court asked us to ‘reapply’ in the three colleges if we wanted to get a fee refund. But that would mean appearing for the IELTS exam (International English Language Testing System), which is a mandatory requirement to study in English-speaking countries. As our previous IELTS exam’s two-year validity was over, we will have to spend Rs 18,000 for the exam, and pay another amount as embassy fee and CAQ charges (Quebec Acceptance Certificate) to study in Quebec province of Canada. This will leave us with an additional expense of approximately Rs 40,000. We are already under debt, mentally harassed and cannot afford this again.”

Another student, Deepak Sharma from Nawanshahr district, who had applied for a course at M-College in Montreal, said, “I am a computer graduate and was looking forward to another degree from Canada. I paid 15,525 CAD, which amounts to Rs 9,31, 500 in Indian currency, as fee. But before I could join M- College in January 2021, the colleges were shut down.”

Deepak said, “We handed over a list of 502 students with all relevant details to Jalandhar MP Santokh Chaudhary. At this moment, apart from legal remedy we also need political pressure to get our voice heard. We are also trying to approach Punjab chief minister Bhagwant Mann or education minister Gurmeet Singh Meet Hayer.”

MP Santokh Singh Chaudhary told The Wire, “I will raise this issue in the parliament session and also take up the matter with the Ministry of External Affairs (MEA) for speedy action.” They also demanded that in case a full fee refund was not possible, the affected 502 students should be given a ‘visa under a special immigration programme’. “We should be issued a ‘May 2022 intake study’ without re-applying, as the students have already proved their eligibility on the basis of which they got AIP (Approval in Principle) students’ approval, a temporary study visa process to pursue education online from home. Our previously submitted applications should be considered for issuing study visas, as our IELTS validity was also over,” they added.

On the other hand, students who were still awaiting a decision on their applications demanded that they should be granted a study visas as soon as possible, so that they could join their colleges in Canada.

The students also pointed out that given the current crisis in Ukraine, the Canadian government has devised a unique programme under which Ukrainian residents were being granted full and unrestricted entrance to Canada. “If Canadian government can consider Ukrainian citizens on priority, then why not address our genuine case too. Our future is at stake,” they pleaded.

Education consultants in Punjab work under a Jalandhar-based registered body called ACOS (Association of Consultants for Overseas Studies). Students get admitted in various foreign universities through these consultants.

Requesting anonymity, an education consultant from Montreal, who is an ACOS member, said that students were being victimised for no fault of their own. “It is the education consultants who are responsible to provide fee refund to the students. They are the ones who got them admitted into these private colleges, some of which started merely two years ago in Montreal. It is a big scam which involves 11 private colleges of Quebec out of which three immediately came under the scanner. The Quebec government was tracking the other eight colleges too,” he said.

On how consultants pocketed big amounts per student in these colleges, he said, “The consultants in Montreal further gave the ‘contract’ of these private colleges to other agents. If the average fee of a student was 16,000 CAD, the agents directly pocketed 6,000 CAD (3.60 lakh commission) while 10,000 went into the kitty of private colleges, amounting to millions. Then the agents in Montreal gave one year fee receipts to the Punjab based agents. This ensured speedy offer letters from these colleges, as compared to the renowned colleges, where the average waiting period was around a year, and students were enrolled in a short span of time.”

He said that since the transactions were not taking place legally and no tax was being paid, the Quebec provincial government froze the accounts of these three colleges and stopped their operations. “When the documents of these colleges were checked, it brought the scam to light,” he added.

It is pertinent to mention here that the classification of colleges in Canada are Community, Private and Public. All renowned colleges in Canada have a standard practice of taking a two-semester fee and a fixed GIC (Guaranteed Investment Certificate) amount for students. However, in these private colleges, these norms were missing.

The consultant said, “People should remain cautious about ‘Pay after Visa’ advertisements too, as these are the ones who trap the students. One should seek all relevant information before spending their hard-earned money.”

Ravneet Kaur, a student of CCSQ College, Montreal, said her classes started from March 25. “Our classes resumed after almost four months. Our parents back home have also heaved a sigh of relief. But we feel helpless about our friends, who are stuck in India. We are waiting for the next hearing of the case and will plan a protest for the Indian students accordingly,” she said.

Varun Khanna, a former student and now a Permanent Resident of Canada, shared that almost all the 1,173 students in Montreal have joined their classes from March 21 onwards. “The three colleges have been bought by one ‘Cestar Group’ after the court’s intervention. The colleges have divided the students in three groups. We are waiting for the next hearing of the case in the first week of April. We have won one part of the struggle and would ensure justice for those stuck in India too,” he said.

Khanna said that the last hearing in the case was on March 14 and the judge has assured the students of every possible help but on the issue of providing a fee refund, he was sounding helpless. “Under the given circumstances, the best solution was that the Canadian government should provide study visas to the 502 students and allow them to continue their education in the same colleges. They have already paid a hefty amount as fee and completed major parts of their courses. The government should take a practical decision in their case,” he added.

Manjot Singh from Amritsar, who recently joined his classes at CDE College, Montreal also said, “We are relieved that our classes have started and we have also got a 20 hour a week job permit under our study visa but we are deeply concerned about our friends in India. They have been attending online classes with us and we will continue our fight for their rights.”