IISc's Open Day, Part of Its Science Outreach programme, is Getting Bigger

"Thanks to the Open Day, I got a chance to see and learn more about some of the concepts we studied in our text books," said a school student from Mandya. 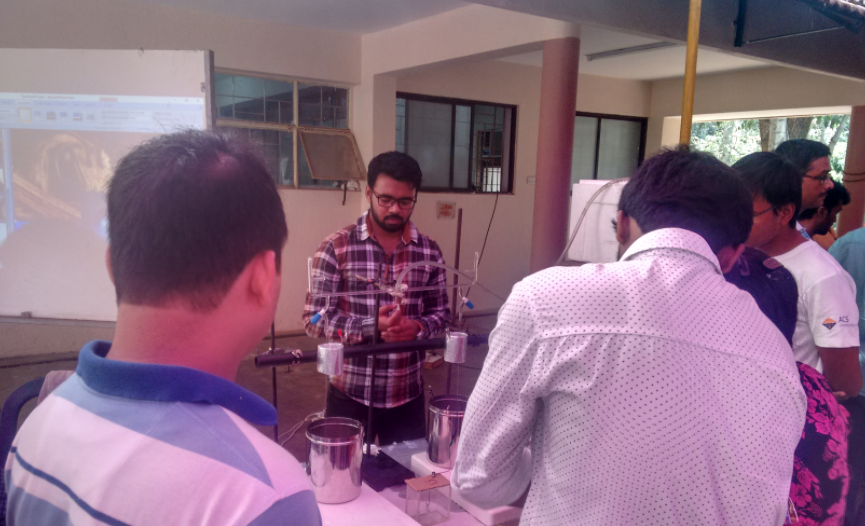 An eager crowd around the SSCU busily stomping the ground sprinkled with a chemical mixture to create a popping sound. Open Day 2017. Credit: Vyasa Shastry

In 2009, the German carmaker Volkswagen launched a campaign titled ‘The Fun Theory’. It hoped to change people’s behaviour for the better through seemingly simple and fun methods. One of the famous finalists of the campaign involved a quick fix to encourage people to use the stairs more often. Overnight, a team transformed the stairs in a Stockholm subway into something resembling a giant, functioning piano keyboard. Walking on the steps (the ‘keys’) produced musical notes. As a result, it was found that about 66% more people favoured the stairs over an adjoining escalator. The video of the campaign went viral on social networks.

Scenes next to the Solid State and Structural Chemistry Unit (SSCU) at the Indian Institute of Science (IISc), Bengaluru, resembled Volkswagen’s campaign on March 4. Researchers had sprinkled some parts of the floor adjoining the SSCU with a combination of iodine and ammonium hydroxide (caution: this can be extremely dangerous if not done correctly). Walking on the resulting compound creating a crackling sound, akin to the therapeutic pleasure obtained by popping bubble wrap. People of all ages had hunched forward and were busy stomping their feet for several minutes all around the area. In one simple but fun demonstration, the IISc Open Day had created a literal spring in the audience’s steps.

The Open Day is a unique event in the Bengalurean calendar. Started in 2010 with an aim to create more awareness about science and its impact among the general public, the event has drawn ever increasing crowds with each passing year. In 2017 alone, footfalls were in the tens of thousands. (Disclosure: the author was one of the founding members of the Open Day.)

Raghavendra, a PhD scholar from the Computer Science and Automation (CSA) department and the publicity coordinator, told The Wire, “The formation of committees usually happens a month in advance. A faculty-in-charge usually oversees all the preparations handled by the student volunteers. For a single department like CSA, around 50 volunteers were actively involved in various activities such as publicity, sponsorships”, liaising with the industry, etc.

To give you a small idea about the level of involvement, many of us visited many schools and colleges for publicity. We got a great response in most places, and their enthusiasm showed in their participation.”

Large audiences were a feature of the Open Day. Credit: Vyasa Shastry

Thanks to their efforts, the usual calm around the lush green campus of IISc was replaced with the pleasant murmurings of conversation. Various department banners and merchandise competed for attention. The average age of the campus had taken a nosedive. The security had a tough time regulating pedestrian and vehicular traffic. Big school buses from the neighbouring districts of Mandya, Tumkur and Kolar had ferried hundreds of enthusiastic schoolchildren chaperoned by their teachers, their voices in varying degrees of hoarseness.

The audience moved from stall to stall, department to department, craning their necks to catch a glimpse of the popular-science displays. Many front-facing cameras were overworked. The greenery, flowering trees and the colourful displays presenting ample photo opportunities. As the day wore on, the March Sun had its say; many sought refuge on the lawns, grabbing a quick snack under the shade of the trees overhead.

“Thanks to the Open Day, I got a chance to see and learn more about some of the concepts we studied in our text books, like superconductivity and Bernoulli’s theorem,” said Rashmi, a school student from Mandya – referring to demonstrations in the physics department. “I hope I get to perform such experiments in the future when I pursue physics in my higher class.” The most popular displays in the basic sciences departments, and other new-age demos like virtual reality, drew large crowds through the day.

Abhishek Banerjee, a professor in the department of mathematics, thinks there is tremendous curiosity about science to go around: “A panel discussion on math we had yesterday was standing-room only. I can’t be sure why but I haven’t seen this level of wild enthusiasm for science among kids anywhere else. Americans are struggling right now to make science and math ‘cool’ in their schools. In India, science and math are like rockstars!”

Having spent several years in France and US during his higher education, Banerjee reckons most institutions abroad could not have pulled off an effort of this scale. “I have seen a tremendous buzz and enthusiasm among faculty and students on campus to make Open Day a success. People spent the entire day on their feet, patiently explaining the same thing over and over again to successive waves of kids. I was a little surprised at how much folks are committed to this,” he said.

IISc is one of few institutions in the country that have an institutionalised scientific outreach program. Some IITs (Delhi and Kanpur come to mind) have also organised events of this nature. All the centres of the Council for Scientific and Industrial Research have Open Days every September as part of their foundation day celebrations.

However, there are other government institutions who have a different take on scientific dissemination in the public sphere. For example, Bengaluru’s Jawaharlal Nehru Planetarium (JNP) runs several extended engagement schemes for students ranging from middle school to undergraduate programs. (This author has served as an instructor at JNP as well).

B.S. Shylaja, the director of JNP, thinks different institutions have distinct directives. “The mandate of a research institute or university is very different compared to, say, the Bengaluru planetarium. We take a specific topic and introduce them to children throughout the year over weekends, providing conceptual clarity. The choice of topic is concurrent with their academic programs. But institutions like IISc are primarily engaged in scientific research. They prefer a different approach.”

What do newer institutions do? According to Kaneenika Sinha, a professor of mathematics from the Indian Institute of Science Education and Research, “We too have such an event [like IISc’s Open Day] on campus. But we’re a newer institute, and so it is not at such a big scale. We certainly hope that it will grow to that scale in time.” She added that they had acquired “several mathematical models” and that they have been on display in their mathematics museum. “We often demonstrate aspects of mathematics using these. In fact, outreach and teaching activities are encouraged in our university, and many faculty members take an active interest in them.”

Sinha mentioned that two of her colleagues, Chandrasheel Bhagwat and Anisa Chorwadwala, “have given several popular talks, many of them in rural areas”. She also writes on popular science in the print media.

It seems the IISc will have to make several decisions on its Open Day’s future based on the resources it wants to commit in realising its vision. The dissemination of science in a talent-show format has its own constraints, and which can only tackled through extended engagement. For example, scheduling the event in March, around the National Science Day and the IISc founder’s day) limits audience participation to some extent – but then it would be a strain on the campus infrastructure to handle crowds later in the year. In any case, a bit of traffic management would also have prevented the less-than-ideal traffic situation around the campus from this year.

Different departments in the institute also experiment with different philosophies. Not all of them were demonstrating easy-to-understand phenomena. A few used posters to communicate research conducted in their respective departments. However, detailed plots and charts about esoteric concepts didn’t strike a chord with the majority of the crowd.

Moreover, a lot of the visitors were from Kannada medium schools. IISc is a residential campus with students from all over India. Even though many volunteers strived to convey their message enthusiastically in their mother-tongues when opportunities arose, they couldn’t cater to this audience with the additional warmth and intimacy that using the local language might have provided. This said, it isn’t surprising that such a thing would happen in an institute with IISc’s demographic diversity, and it could be tackled by roping in people from around the city to work together conjunction with the student body.

Then again, there are other factors to consider as well, according to Vikram Jayaram, the divisional chairman of the mechanical sciences. “It is unlikely that the institute will move away from the present volunteer-driven model. We’ve found that an event of this scale works the best with the institute’s culture. Given this, an Open Day with a much enlarged scope would probably be beyond the bandwidth that we can handle. It may take off in a given year but it is unlikely to sustain itself in the long run. Similarly, I’m not so sure of an institutionalised vernacular science communication program flourishing without accompanying vibrant literature. Perhaps we’ll have an additional exhibition of various technologies and innovations developed across the institute.”

As a former student, visiting the IISc campus and watching the event was a gratifying experience. It was hard not to be a kid once again, in the midst of all the excitement. It’s evident that successive batches of IISc students have made large contributions, which together have made Open Day a great advertisement for science.

Vyasa Shastry is a materials engineer and a consultant who writes about science, technology and society in his spare time. He has contributed to Mint, The Hindu and Scroll.