Indian Council of Philosophical Research orders postponement of conference on religious pluralism because 'there are some papers on tribal religious practices, some papers are by foreign scholars.'

New Delhi: The Sangh parivar’s fear of adivasi culture and beliefs was brought home in a dramatic fashion on Friday when the Indian Council of Philosophical Research – the human resource development ministry’s apex body for the study of philosophy – forced the postponement of an academic seminar on the theme of religious pluralism because “there are some papers on tribal religious practices”.

The ICPR is headed by S.R. Bhatt, a philosophy professor considered close to the RSS, who was appointed to the post by Smriti Irani when she was HRD minister.

On Friday, the ICPR informed the organisers of the conference at Jawaharlal Nehru University – who had originally been asked by the council to convene the event in the first place – that it had “decided to postpone the seminar.”

“This is with reference to 11 papers and 20 abstracts submitted for the ICPR Seminar on ‘Religious Pluralism and the Relationship between Religions’, submitted via email on 24.03.2018. As per the norms of the ICPR the papers were sent for the evaluation.

Report of the paper evaluation submitted to Chairman ICPR is as:

(1) There are some papers on tribal religious practices. (2) Some only abstracts. (3) Some papers are by foreign scholars. (4) Many of the papers do not seem to conform to the theme note.

The evaluator in his evaluation report advised for postponement of seminar and Chairman, ICPR has decided to postpone the seminar. There, the seminar stands postponed and may I kindly request you to inform all the participants accordingly.”

The irony of an official body citing the presence of papers on adivasi religion as a reason for withholding clearance for a seminar on religious pluralism will not be lost on tribals – who constitute 8.4% of the country’s population.

The letter, which was signed by R.K. Shukla, member secretary of the ICPR, adds that the council will make good any of the cancellation charges that the participants will incur as well as the “retention charge for accommodation arrangements”. These expenses are expected to run into a few lakhs of rupees.

The seminar concept note, which the ICPR cleared, clearly lists “arguments about religious diversity in Classical and contemporary Islamic texts, the Bhagavad Gita, Jain Buddhist and tribal traditions”, “a philosophical examination of different religious traditions with a view to recovering religious arguments about how one ought to respond to differing and different religious others” and “any related topics that can throw some light on the central theme of the seminar.”  Why the ICPR is now objecting to papers on tribal religious practices is not clear.

One reason could be the RSS view that adivasis are essentially forest-dwelling Hindus, or ‘vanvasis’ and that their belief systems should not be treated as something independent of Hinduism. Indeed, to the extent to which adivasi religious practices – especially in central India – do not conform to the Sangh’s idea of Hinduism, the organisation has been using its network of schools and other organisations to ‘Hinduise’ them.

According to the seminar schedule drawn up by the convener, Prof Bindu Puri of JNU, the following three papers dealt with tribal perspectives on religious pluralism and the relationship between religions:

The invited participants of the now postponed – but effectively cancelled – seminar included Mrinal Miri, a Mising tribal from Assam and one of India’s most prominent philosophers, who headed the ICPR till 2015, Vinit Haksar from Edinburgh University, Bhagat Oinam from JNU, Deepak Sarma from Case Western Reserve University, R.P. Singh from Delhi University, Namita Nimbalkar from Mumbai and Sonia Sikka from the University of Ottawa, besides more than 20 other scholars from around India. 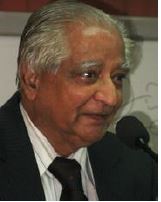 Asked to explain the ICPR’s objection to ‘papers on tribal religious practices’, S.R. Bhatt first said that the council had simply followed the report of its evaluator and said the reference to tribals in the letter postponing the seminar might have been a “mistake.”

When reminded that the presence of papers on tribals was the first negative ‘observation’ mentioned in the ICPR’s letter, Bhatt changed tack and defended the reference. “We cannot have papers on adivasi religion. The papers must only be on religious pluralism”, he said.

Pressed to elaborate, he said that there was a difference between “the religion of tribals” and “what tribals think about religious pluralism”. He said there had to be “conceptual clarity”. “You see, we take these things very seriously, this is a philosophy seminar … Our reviewer has done justice to the papers”.

Scholars familiar with the programme and the papers dismissed Bhatt’s argument.

“The distinction [Bhatt draws] implies that (i) a tribe does not have a religion of its own, (ii) therefore for a tribal to think that she/he can speak or write about her/his religion is deeply mistaken and seminar presentation based on such a mistake cannot be allowed, (iii) the most that a tribal can be permitted to talk about in a seminar on plurality of religions is “proper” religions, and not her/his own because the belief that there is such a thing is mistaken – the community of religions has no place for what the tribal thinks is her or his religion,” Miri told The Wire in an email. “Such thoughts can suggest themselves only to a sadly, but dangerously, inadequate and academically illiterate mind,” he added.

“If we are discussing religious pluralism, there is even more compelling reason to include tribal religions because they provide a strong argument for a non-transcendental idea of God,” said Jyotirmaya Sharma, a professor of political science at the University of Hyderabad who has written extensively on religion and philosophy. “This controversy confirms my belief that Soviet-style bodies like the ICPR ought to be disbanded.” 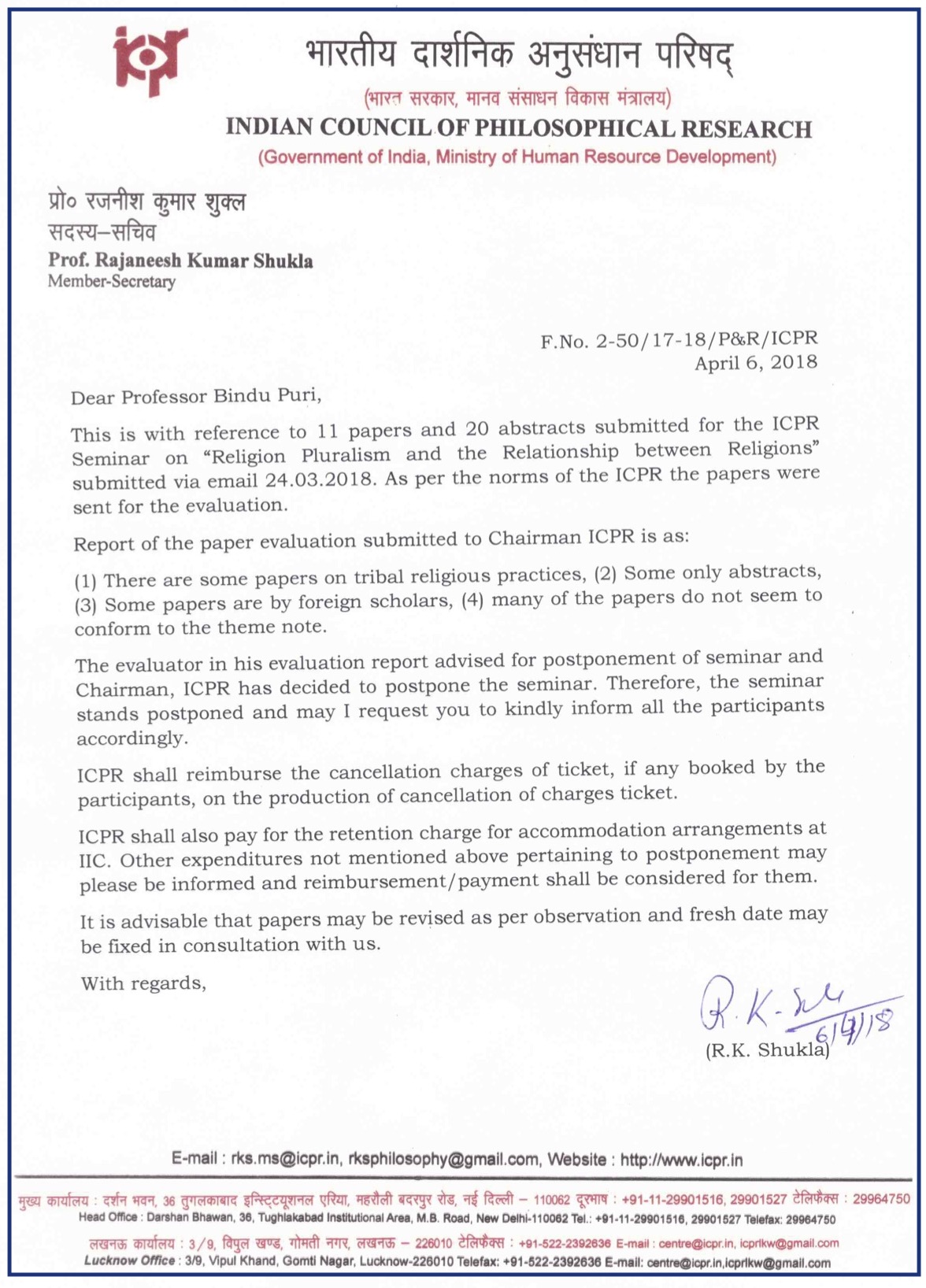 The ICPR’s ‘observation’ that “some papers are by foreign scholars” – a reference to Haksar, Sikka and Sarma – suggests either a new level of official xenophobia, or intolerance towards ideas that do not conform to the official orthodoxy.  Haksar’s paper was on Gandhi and religious pluralism, Sikka was going to speak on ‘religion as belief and identity’ and Sarma on the Madhvas.

Reacting to the ICPR’s “surprising and disappointing concern about ‘foreign scholars’,” Sarma told The Wire by email: “Ironically issues concerning insiders and outsiders have been the focus of my own work. In my dissertation, and elsewhere, I argued that Madhvacarya offered an insider epistemology wherein only insiders could learn and speak about the tenets of Dvaita Vedanta. Such a restriction protected Madhva Vedanta from certain kinds of philosophical attack, given that outsiders were not permitted to learn about, and therefore could not critically examine Madhva doctrine. Only those, of course, with adhikara, were permitted access and given voice. It seems that a similar strategy has been employed by the ICPR here. The xenophobia/nativism expressed in the letter exposes a worrisome trend that is pervading the world these days, and that is exemplified in current political climate of the United States.”

“In the past, I have been playfully referred to as a so-called ABCD,” said Sarma, and asked,  “Do I now have to drop the Desi?”

Bhatt told The Wire that the presence of foreign scholars was one of the reasons the ICPR has postponed the event – because government rules required that permission be sought from the Ministry of External Affairs first.

Sources in the JNU administration dispute this. The home ministry’s rules for conference visas for foreign scholars organised by “public-funded universities” specify the need for political clearance from the MEA only if the event is in a restricted area like Kashmir or involves scholars from Pakistan, China, Sudan, Afghanistan or Iraq. The foreign scholars called for the JNU event were OCI cardholders from the US and Canada. Secondly, even if clearance was required, the ICPR was aware of the participation of overseas academics for the past six weeks but did nothing to raise the matter with either the MEA or JNU. Though the scholars were paying their own airfare, the ICPR had in fact explicitly sanctioned the expenditure for their stay in Delhi for the duration of the seminar.

Asked why his office had pulled the plug on the seminar at the eleventh hour, Bhatt acknowledged there had been a delay and said he would look into the reasons.

Though the ICPR’s letter did not mention this as a factor, Bhatt claimed council-sponsored events required at least 12 papers of quality and that the number had fallen short. However, sources in the JNU administration confirmed that 12 papers had indeed been submitted. As for the claim that some of the papers did not conform with the seminar theme which had been cleared, scholars familiar with the programme said this was simply not the case. “The concept note was five pages long and broad in its scope. All the papers spoke to some aspect of the concept note.”

One of the philosophers who was to attend the seminar said that the academic community “should press for a reconstituted new council as this one is frightened of plurality.” At the very least, he said, “we should press for the removal of the present chairman and member secretary who can blatantly speak against tribals and foreigners.”

Sikka, who has written extensively on the teaching of religion in India, said it was ironic that “a conference purportedly on religious pluralism has been cancelled because some of the papers may not conform to a particular religious ideology.” “My impression”, she told The Wire, “is that there is some objection to the very idea of tribal religions as well as to the use of the term ‘adivasi’.  I think we can all guess why. It is fine to question such ideas – and any others – in the course of an academic seminar, but to disallow them from the beginning means stifling free discussion and debate.  Philosophy cannot survive in such a climate. ”

Note: This story was edited to add the reactions from Sonia Sikka and Deepak Sarma.