As he turns 90, the world’s foremost intellectual activist continues to speak to our collective conscience with rare energy and passion. 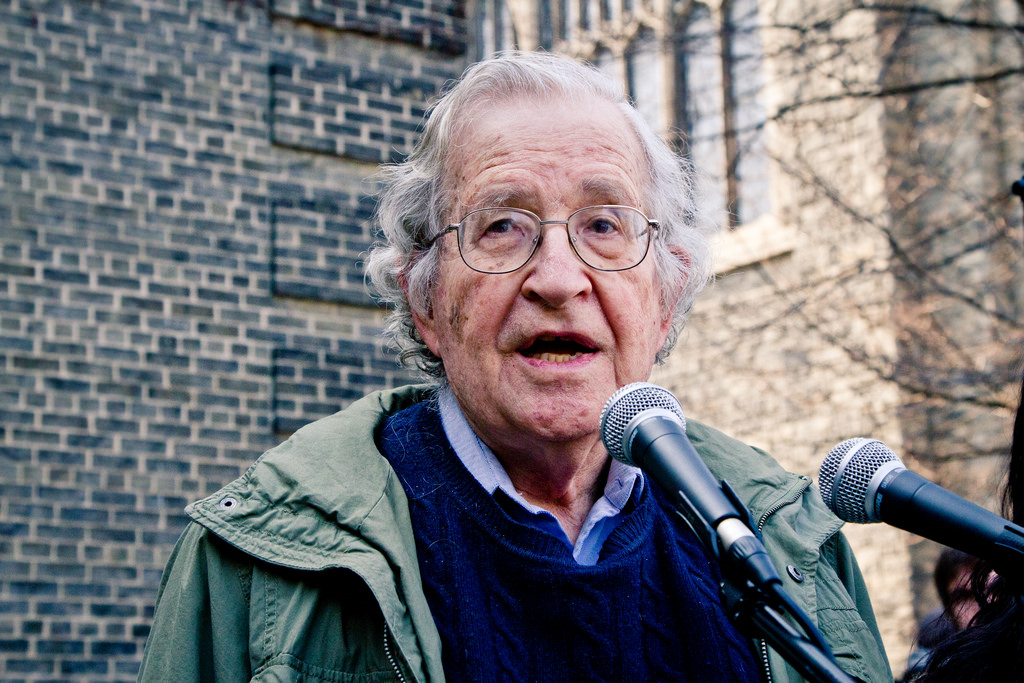 A broad theme that runs through everything that Noam Chomsky has written over 50 years or more is individual choice.

The choice, Chomsky was convinced early, is as compelling as it is narrow. In the 2017 book Optimism over Despair, when the political economist C.J. Polychroniou asks him, “Are you overall optimistic about the future of humanity, given the kind of creatures we are?”, Chomsky gives nearly the exact same answer he had given 17 years earlier to a young journalist at Chennai’s Asian College of Journalism who had wondered if the venerable professor was being “a little too optimistic” in a world which seemed to hold little promise of positive change:

“We have two choices. We can be pessimistic, give up, and help ensure that the worst will happen. Or we can be optimistic, grasp the opportunities that surely exist, and maybe help make the world a better place. Not much of a choice.”

“Not much of a choice”, Chomsky has never tired of reminding everyone who cares to listen. He makes it plain – without saying it in these words, for he hates to declaim or sound dramatic – that, to be human, one has to stick with that narrow choice.

It was true in the mid-1960s, when he plunged into anti-Vietnam War activism; and it remains true today when, with vast communities struggling to come to terms with the devastations caused by corporate greed and climate change. Chomsky continues to engage without let-up with the most basic questions confronting human society—inequality, injustice and unfreedoms of many different kinds. When the ‘Occupy Wall Street’ movement erupted across US cities in September, 2011, pitting “(w)e (who) are the 99%” against the insanely-rich 1% who manipulate public policy with impunity, he joined in with gusto, speaking at rallies and public meetings and writing about what it was all about.

As a scientist, Chomsky always locates the question of rational choice at the centre of any debate about issues of real public interest. That is not to say, though, that he is concerned with rationality alone. Far from it, in fact. Chomsky has written extensively about how a ‘rational’ debate can be so constructed as to completely undermine – indeed, subvert – the irreducible moral values implicit in a choice.

With withering scorn, he wrote in his 1969 classic, American Power and the New Mandarins, about well-known American liberals who managed to successfully mask the immorality of  the war on Vietnam, projecting the debate around the war as primarily one about the proportionality of its costs to its likely outcome. In a talk given at Harvard in June, 1966 in the course of the anti-war protests– later published as the celebrated essay The Responsibility of Intellectuals – Chomsky argues that Americans “can hardly avoid asking (themselves) to what extent the American people bear responsibility for the savage American assault on a largely helpless rural population in Vietnam”. He closes the essay with these memorable words:

“Let me….return to (Dwight) Macdonald (the American writer-activist) and the responsibility of intellectuals. Macdonald quotes an interview with a death-camp paymaster who bursts into tears when told that the Russians would hang him. ‘Why should they? What have I done?’, he asked. Macdonald concludes: ’Only those who are willing to resist authority themselves when it conflicts too intolerably with their personal moral code, only they have the right to condemn the death-camp paymaster’. The question, ‘What have I done?’, is one that we may well ask ourselves, as we read, each day, of fresh atrocities in Vietnam – as we create, or mouth, or tolerate the deceptions  that will be used to justify the next ‘defence of freedom’.”

This is the moral code that Chomsky assimilated early on. He lives his life by it, and his own judgment of others is premised in the same code. He tells us why:

“Intellectuals are in a position to expose the lies of governments, to analyse actions according to their causes and motives and often hidden intentions. In the Western world at least, they have the power that comes from political liberty, from access to information and freedom of expression. For a privileged minority, Western democracy provides the leisure, the facilities and the training to seek the truth lying hidden behind the veil of distortions and misrepresentation, ideology, and class interest through which the events of current history  are presented to us.”

It follows from here that

“(i)t is the responsibility of intellectuals to speak the truth and to expose lies. This, at least, may seem enough of a truism to pass without comment. Not so, however. For the modern intellectual, it is not at all obvious.”

The intellectual, then, has a simple – but also stark – choice to make: he can either ask himself if he is being true to his calling (by speaking the truth and exposing lies); or, if he is willing to be suborned by the powers-that-be, he may end up asking himself someday, a la the Nazi death-camp pay-master, ‘What have I done?’

Chomsky’s choice had been made as an undergraduate in the mid-1940s, for his political and moral consciousness had been formed, as he himself places on record, “by the horrors of the 1930s, by the war in Ethiopia, the Russian purges, the China incident, the Spanish Civil War, the Nazi atrocities, the western reaction to these events and, in part, complicity in them ….”

His astringent, unceasing critique of American foreign policy through the 1970s and 1980s earned him a place on Richard Nixon’s infamous ‘Enemies List’. His formidable reputation as the foremost language theorist/philosopher of the 20th century (as well as the most-often-cited humanities scholar in all academic work across the world) probably saved his job at MIT, but the doors to mainstream media and publishing were firmly barred to him for much of his life. Even the funding of the many frontline research programmes that he helmed at the MIT’s School of Modern Languages and Linguistics (including in such cutting-edge areas as psycholinguistics and neurolinguistics) ran into rough weather often enough.

The question of choice has taken on a special sense of urgency in relation to the culture of mass media today, in India as much as, say, in the US. Chomsky has always believed that the much-vaunted freedom of  expression in liberal democracies is largely a sham, because powerful interest groups, solidly invested in maintaining and strengthening the status quo, manage to limit the spectrum of public discourse with great skill. Once the contours of debates have been firmly drawn – and any outliers irrevocably ‘demonstrated’ to be deviant – public opinion is conditioned to stay within those clearly-marked boundaries and not stray beyond them. Chomsky famously called this process ‘the manufacturing of consent’.

If mainstream US media  have finessed this process over many years, the Indian media today is no longer behind them. Thus, when under-trial, or simply jailed-without-trial, prisoners are killed in ‘encounters’ with the police, the media often think nothing of underplaying these state-sponsored  murders, and report in punctilious detail on the ‘unsavoury antecedents’ of the victims. At a time like this, something as routine as the discharge of basic journalistic duties – reporting what is really happening on the ground and nailing lies peddled by officialdom – itself becomes an act of deliberate and careful choice.

The need for resistance

At the height of the anti-Vietnam War protests, Chomsky recognised active resistance as a valid choice for dissenters, though he freely admits that activism per se does not quite agree with him personally. In the concluding chapter of American Power and the New Mandarins, he has this to say on the options in the specific context of the US in the 1960s:

“Given the enormous dangers of escalation (of the Vietnam conflict) and its hateful character, it makes sense … to search for ways to raise the domestic cost of American aggression, to raise it to a point where it cannot be overlooked by those who have to calculate such costs. One must then consider in what ways it is possible to pose a serious threat (to the war effort). Many possibilities cone to mind: a general strike, university strikes, attempts to hamper war production and supply, and so on……. Resistance is in part a moral responsibility, in part a tactic to affect government policy. In particular, with respect to support for draft resistance, I feel that it is a moral responsibility that cannot be shirked…..”

In the event, Chomsky did participate in civil disobedience movements himself, marching on Washington with tens of thousands of others to return thousands of draft cards to the attorney general’s office. He also campaigned widely across university campuses and participated in some memorable teach-ins, including one electrifying episode just outside the gates of the Pentagon which has entered modern American folklore, in a manner of speaking.

In his essay ‘On Resistance’,  Chomsky quotes the great civil rights leader  A .J. Muste in the context of the Vietnam War: “ ……the problem after a war is with the victor. He thinks he has just proved that war and violence pay. Who will now teach him a lesson?”

One of the brightest minds of the post-second-world-war world and a consummate teacher himself, Chomsky has spent the best part of his life  teaching lessons to successive American administrations. It is remarkable how he retains his penchant for teaching lessons to the arrogant and the powerful even as he turns 90 on December 7 this year. Incredibly, he has also agreed to teach a term (presumably to undergrads) at Arizona State University-Tempe in the upcoming academic year, his first major academic commitment outside of the MIT. The choices that Noam Chomsky makes have sometimes baffled some people, but look closely, and you will find a unity of purpose in all of them.

Anjan Basu freelances as a translator of poetry, literary critic and commentator. He can be reached at basuanjan52@gmail.com