No Pointless 'Farmaans' on Compulsory Attendance in JNU, Please!

Since the beginning of 2018, over 7,000 students of JNU have collectively boycotted compulsory attendance. Teachers too are refusing to mark attendance. 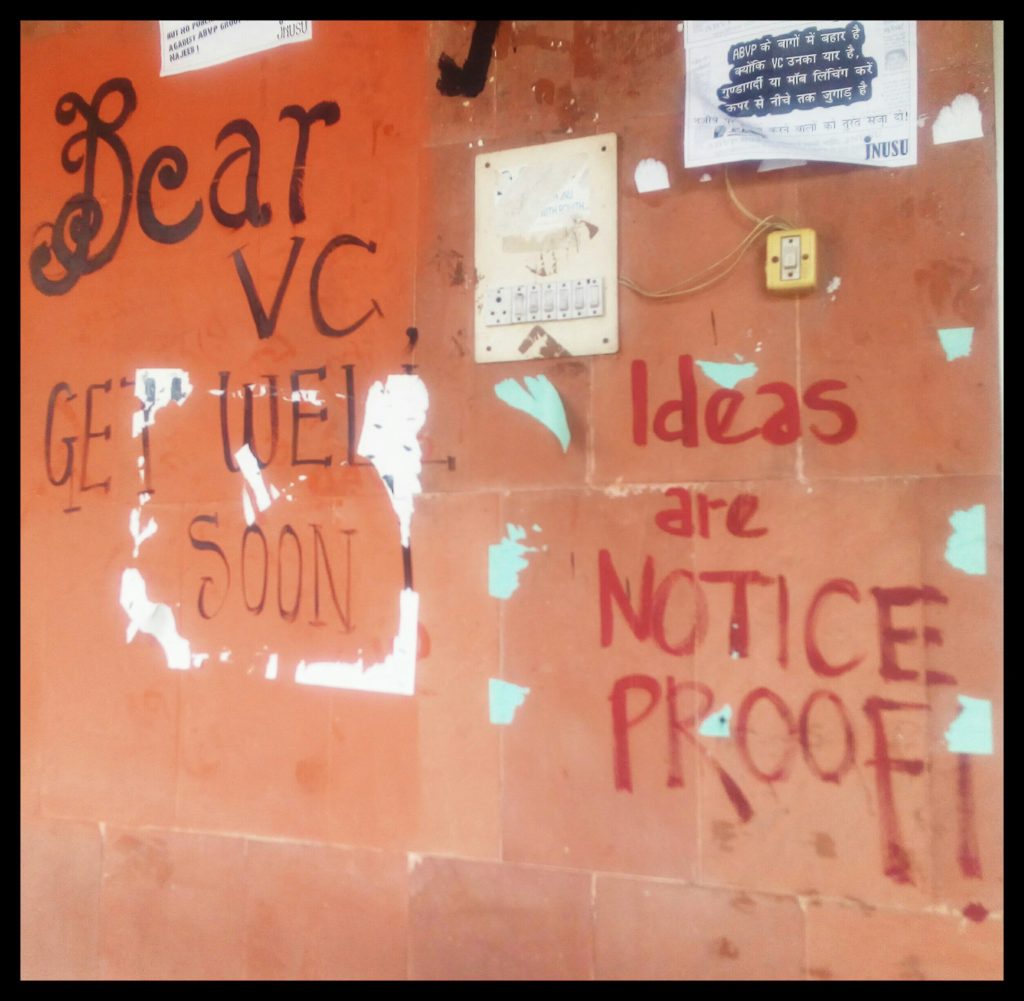 ‘Ideas are notice-proof’ says a slogan on a wall in JNU. Credit: Twitter

“I believe compulsory attendance no longer serves a useful function, neither to schools, teachers or students, and that it should be done away with or greatly modified. I think we have made education, which should be something that helps young people move into the world and do useful work there, into an enormous obstacle standing in their way, and I think we need to find ways to remove that obstacle.”
∼ John Holt, renowned educator.

Compulsory attendance, like compulsory learning, is what John Holt called “a tyranny and a crime against the human spirit.” Such fiats stem from distrusting the student and overlooking the various life circumstances of the learner. They obstruct rather than facilitate student participation in learning.

Since the beginning of 2018, the students of Jawaharlal Nehru University (JNU) have been in a civil disobedience movement. As soon as the winter semester began, the JNU vice-chancellor Jagadesh Kumar imposed an illegal and illogical policy of demanding compulsory attendance of students.

This policy, that was never passed nor discussed in any democratic decision-making forum of JNU, is being forcibly implemented. In the circular circulated among JNU’s different schools and centres, the administration has claimed that the “decision” was passed in a meeting of the Academic Council (the highest decision-making body of the university) on December 1, 2017.

This claim is totally inaccurate. The AC meeting never adopted any such “decision” nor was the attendance system even part of the agenda at that meeting. The concerned “item no.39” which the JNU administration is citing as proof of its claim, pertains to an issue of CGPA (Cumulative Grade Point Average) hike for BA/MA students of the School of Languages, Literature and Culture Studies – without making any mention of the attendance system.

Students – and teachers – through many innovative ways, are resisting this move by the VC. The JNUTA general body passed a resolution that is worth reading in full, to understand why even the teaching community is so strongly opposed to compulsory attendance:

“The JNUTA General Body opposes the preposterous declaration that henceforth attendance will be compulsory for all categories of students in JNU. It strongly contests the presupposition that such a declaration makes, as there is no problem of mass or generalised absenteeism in classes. To expect Centres and teachers to maintain records of attendance for students doing course work, specially in a university where a student may take courses from any Centre, drop them formally, or drop out of them, is to load teachers with a highly unproductive and meaningless form of bureaucratic work that does nothing whatsoever to enhance learning and critical engagement with the subject. Similarly, to expect research scholars to report in every day, when their work can require them to be in different parts of the city or on fieldwork or in conferences/seminars etc, is ridiculous, specially when every month Research Supervisors and Chairpersons sign on fellowship forms certifying their presence and satisfactory progress. The JNUTA General Body refuses to cooperate with this penalty being imposed on students and teachers alike. It calls on all Centres/Schools to discuss this matter in depth and to forward its resolutions to the JNU administration.”

Since then, more than 7,000 students of JNU (which has an overall strength of nearly 8,500 students) have collectively boycotted compulsory attendance over the whole month, with the boycott numbers continuing to increase. Teachers, too, are refusing to mark attendance. The administration prescribed a daily attendance system for both BA/MA and MPhil-PhD students with sheets filled with names of students for BA/MA given to the respective course teachers and registers kept in the Centre offices of respective schools for research scholars’ attendance.

The important thing to note in this conflict is that JNU students just don’t attend classes but they “over-attend” them. You will find a French language student after attending his/her classes in School of Languages going to School of International Studies and participating in a seminar of European studies,’ a History student walking into a language class to learn Spanish or German. You will find an English Literature class going on for four or five hours instead of the prescribed two hours. You will find students demanding extra classes from teachers on topics that are not strictly ‘part of the curriculum.’

This interdisciplinary approach is what makes JNU the university it is. Here, lectures are attended not by compulsion but by the love of and hunger for learning. The unique, inclusive admission policy of JNU with deprivation points based on gender and backwardness of region ensures not only access but also quality education for thousands of students from poor and socially marginalised sections of society. We believe education is best achieved when it is accessible, affordable and there is freedom to pursue it. This is the very reason student in JNU have seen compulsory attendance as regimentation by VC against academic freedom and excellence.

The best universities in the world neither have compulsory attendance nor any coercive measures to impart knowledge. Rather they encourage and prescribe a dialogue between student and teacher, as education and knowledge are a two-way process, a process where both teacher and student learn from and teach each other. Be it the Indian Administrative Service, Indian Police Service, Foreign Service, research, activism or politics, people trained in this pedagogic tradition in JNU have contributed to our society and country.

Also read: No to Mandatory Attendance: A Pedagogic Struggle for Academic Freedom in JNU

The present VC is trying to destroy this very education system by citing the example of IIT – which was meant to cater to undergraduates – whereas JNU was designed and established primarily for research. Compared with universities and colleges where similar courses are taught with compulsory 75% attendance for BA/MA students as well as research scholars, JNU’s performance was – and still is – way better than the rest.

JNU has consistently been awarded A Plus grade in NAAC assessments. Last year, the JNU VC collected a President’s Excellence Award on behalf of the university. Probably for the VC, JNU’s awards of excellence are a feather in his cap – but he has contributed nothing to its achievement. Sadly, he does not care to know what has made JNU such an excellent institution. JNU’s faculty and students are the ones who have consistently been achieving this excellence without using force, fiats, and threats – and that too – long before Kumar was appointed VC.

An undergraduate student, fresh from his/her schooling experiences a whole new world. In the pursuit to understand and live life, if this individual fails to be present in the class, should the education system flush them out or give them an opportunity to learn and unlearn?

Shouldn’t the effort be to engage the student in the learning process through motivation and encouragement rather than punishment? Do we see our colleges, universities and learning institutions like jails and students as criminals? It is ironic that even when our criminal system invests in the belief of reform, our education system is seeking to strengthen its machinery to punish and criminalise students.

For MPhil-PhD students, to produce research, they need to engage with different groups, attend conferences discussions, classes, seminars and do research. Even in the sciences, we know there is a demarcation between lab-based research, field-based research and theoretical research. How can a student engaged in field-based and theoretical research be forced to be present physically when he/she needs to engage with the larger academic world?

If JNU today is India’s top-rated university for both sciences as well as humanities and social sciences, it is due to the efforts of students with a passion for learning and teachers dedicated to teaching. If students are provided better infrastructural facilities, resources, books, fellowships all over the country, India would not have to worry about any “attendance problem.”