In addition to the threat of COVID-19, students say floods, rains and the lack of regular transport services has made getting to exam centres much harder. 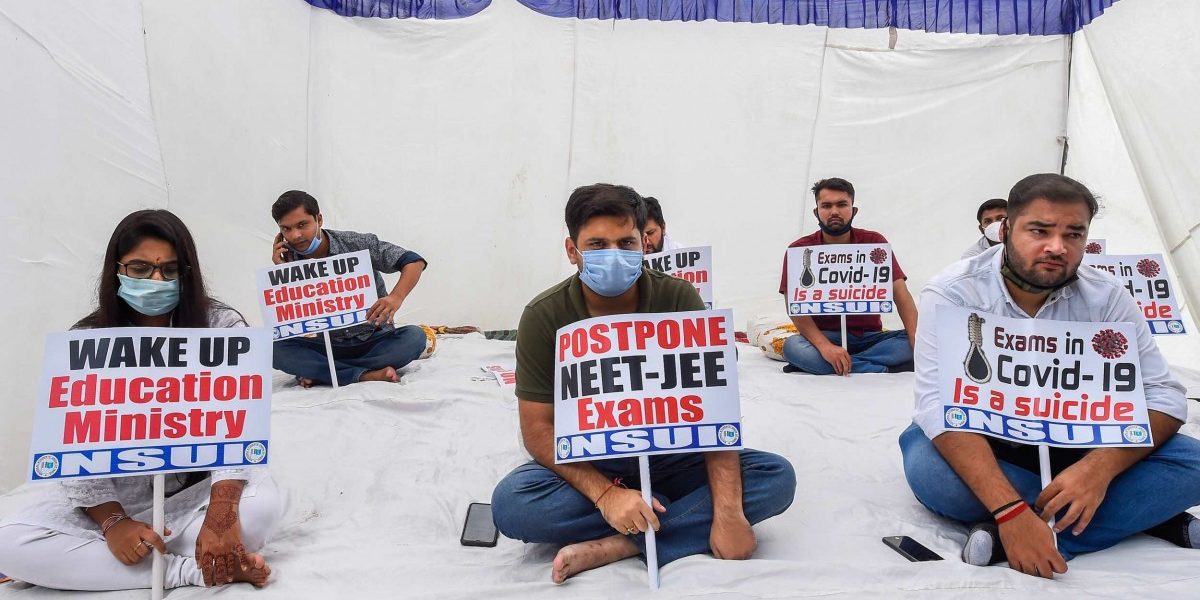 NSUI members display placards during a hunger strike in protest against the alleged cruel and irresponsible decision of the government to call for University exams amid COVID-19 pandemic, in New Delhi, Wednesday, August 26, 2020. Photo: PTI/Kamal Singh

New Delhi: As the dates for the NEET and JEE exams come closer, students across India are protesting – fasting, wearing black bands and expressing outrage on social media outrage. Apart from the COVID-19 threat, students coming from flood-hit states such as Bihar, Gujarat and Assam, those from rain-hit districts in Kerala and those from Jammu and Kashmir where internet restrictions continue will have difficulty commuting to exam centres, as transport options are limited.

The nationwide lockdown has also meant job losses and salary cuts for some students’ parents, who are now saying they cannot afford to send their children to exam centres in private vehicles. Over 8.58 lakh students have registered for the JEE and 15.97 lakh for NEET (UG) this year.

“I am a parent. I would like to request the MHRD [Ministry of Human Resource Development] to postpone the JEE and NEET exams, as my daughter and son are both planning to appear for the exams and I feel extremely uncomfortable sending them to write an exam in such an unsafe situation, due to COVID-19,” said Yasmin Sayyed, mother of two NEET aspirants who lives in Jalgaon, Maharashtra.

“Thousands of students will go into the same centre. What if something happens? Please find an alternative way to admit them so that their year isn’t wasted,” she further requested.

The JEE exam for engineering aspirants is usually conducted in April, while NEET for medical aspirants in May. This was delayed significantly owing to the COVID-19 pandemic this year. The exams were postponed twice to restrict the spread of the novel coronavirus. The JEE exams are now set to happen between September 1 and 6, while the NEET exams are scheduled for September 13.

Vishal Chaurasia from Deoria, Uttar Pradesh is a JEE aspirant and has been studying in a coaching centre in Rajasthan’s Kota for the last two years in order to clear the exam. “It is my dream to clear the exam with a good rank. But as we all know, thousands of people are dying due to COVID-19. Normal life has stopped. The government’s decision to go ahead with the exams is shocking. In many states, a lockdown has been imposed and public transport is suspended. At such a time, the government is forcing us to get out of our homes despite all the problems. It is unfortunate,” Vishal said. Vishal’s brother, Ankit Chaurasia, who is also a JEE aspirant, added, “I have also prepared for the IIT-JEE exam for two years in Kota, and was finally going to appear for the exam this year. People are saying that the students are unprepared and that’s why want the exams to get postponed – which couldn’t be farther from the truth. We are fully prepared, but not willing to risk our lives.”

There are a total of 41 JEE centres in Uttar Pradesh – the India’s largest state with 75 districts – but there is no centre in Deoria. The two brothers will have to book a private vehicle to reach Lucknow, they say, which is about 300 km from their hometown.

Shanti Devi, their mother, said, “I hope the government will take into consideration the dangers of conducting an exam right now and postpone it. Children should be a priority.”

Danish Khan, a NEET aspirant from Bihar’s Bhagalpur, said, “I am in favour of postponing all the exams in the country right now because of the health crisis. We are peacefully protesting today by wearing black bands and by going on a hunger strike. The NDA government seems not to care about us. Had they postponed the exams, we would have been sitting and revising instead of protesting.”

There are only two NEET centres in the whole of Bihar – in the capital, Patna, and Gaya, which are both about 250 km from Bhagalpur.

While the National Testing Agency has tried in several ways to convince students to give the exams, students aren’t ready to budge. The agency has increased the number of examination centres for the JEE from 570 to 660 and for NEET from 2,546 to 3,843, made admit cards available online and also said that precautionary measures such as providing sanitiser at the entry and exit points of centres will be taken, and social distancing will be practiced while giving the exam. What about those with disabilities and poor students?

Students’ organisations such as AISA, SFI and NSUI, among others, have been holding consistent social media campaigns to demand the cancellation or postponement of the exams. The Twitter hashtag #ProtestAgainstExamsinCovid is being used to express anger and dissent on social media.

N. Sai Balaji, national president of AISA, said, “Firstly there are NEET and JEE exams, secondly there are UPSC exams, then you have NDA, then CLAT, then the Delhi University Entrance examination and so on. Students are saying that the government sent them home during the lockdown, there is no public transport available, some states have been hit by floods and heavy rainfall – how do we come for the exam now? Should we row a boat to reach? The coronavirus cases are only increasing. In this situation, you [the government] are asking us to risk our and our parents’ health, when we clearly know the inadequate state of healthcare in the country.”

He added, “A student has been calling me constantly, she is dealing with a lot of anxiety, having suicidal thoughts and is in depression because of this. Students are under extreme mental stress.”

He also pointed to the decreased income and lost jobs for the parents of several aspiring students, and asked how students will disabilities will manage the long commute.

Vaishanvi Mhatre, 19, a resident of Tambadmal in Maharashtra, is a NEET aspirant. She has been preparing for the exams for the past three years. She feels that the examination is discriminatory, especially for female students. She said, “My choice for exam centre was Thane, which is close by. But they have given me Ambarnath, which is about two hours away from my house.”

Also read: As Greta Thunberg Raises ‘Postpone NEET, JEE’ Pitch, Here’s What the Chorus Is About

She said she will have to book a private vehicle to reach the examination centre on September 13. “It’s very discriminatory for women, especially because some of us will not be allowed to travel alone and will have to take somebody along – risking their health as well as ours. My parents told me that they would have accompanied me even if the centre had been in America. They are both about 50 years and vulnerable to contracting the virus. Moreover, I live in a joint family, so I will not just put myself in danger, but also my entire extended family for the exam. But what’s the way out? None,” she sighed.

Siraj Hussain, Former Union Secretary, Agriculture and former VC at Jamia Hamdard, says, “I have talked to several parents, students and teachers. One view is that the exams cannot be postponed indefinitely because the sessions have to start sooner or later. In any case, it is unlikely that the Covid-19 situation will get under control within a few months. So their plan is to select those who clear the exam soon, and those who don’t get selected can make their own plans. The other viewpoint is to postpone the exams.”

He added, “I think, on balance, the two exams are only a part of the entire examination system in the country. So, if covid-19 is going to continue for some time, my own impression is that the examination should go on. The centre would have definitely considered the students’ demands before taking a call.”