The teenager, who was heckled by a mob at her college in Mandya, says she is fighting for her right to wear a hijab. 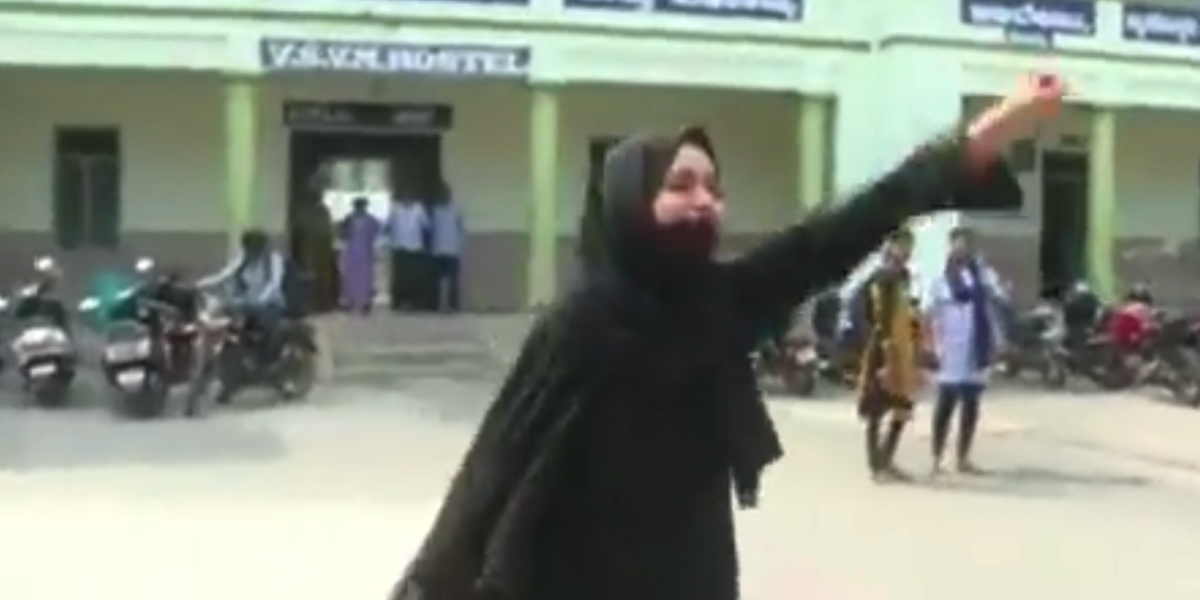 Mandya, Karnataka: Muskan Khan, the student whose iconic rebuttal to a group of males who heckled her for wearing a hijab in Karnataka’s Mandya has made waves across the country, says she was did not say ‘Allahu Akbar’ to offend those who were saying ‘Jai Shri Ram’ but only to give her courage and strength.

Khan was heckled by a mob at the gate of PES College of Arts, Science and Commerce in Mandya on Tuesday, February 8 because she was wearing a hijab. She, however, refused to surrender to their pressure and proceeded to go into the college. As the group started chanting ‘Jai Shri Ram’, she responded with ‘Allahu Akbar’.

A lone Muslim girl on the way to her college in Karnataka, India is being heckled and harassed by a Hindu right-wing mob for wearing a hijab! pic.twitter.com/DiVjCbqpdW

The hijab ban began in December 2021, when six female students of the Government Pre-University College for Girls in Udupi were barred from attending classes wearing the headscarf. Several other colleges have also barred girls in hijab from entering the college. Meanwhile, some Hindu students began wearing saffron shawls as a form of ‘protest’.

The six girls have been protesting against the authorities and filed a writ petition in the Karnataka high, saying their fundamental rights are being violated. The court passed an interim order on Thursday, February 10, saying students should not wear ‘religious dress’ until it decides the matter.

Khan has been wearing a hijab since she was 7 or 8 years old. “I’m not doing any communalism, nor did I say ‘Allahu Akbar’ to offend those who were saying ‘Jai Shri Ram’, ” she said. “I was so scared at that time. I was trembling and took Allah’s name, so that he would help me out. When I said ‘Allahu Akbar’, I got the strength and courage to face the situation. I call his name during times of difficulty, and that’s why I’ve been honoured with so much respect in the whole world. I’m so thankful for it.”

Recalling the incident, Muskan told The Wire, “That day, I didn’t even know that there was a protest. When I went to college, many boys and men surrounded me and told me that if I wanted to go inside, I should remove my hijab. They said, ‘If you want to study here, then remove your headscarf, otherwise go home’.”

“I just ignored them, entered the gate and parked my bike. But still, they were coming in my way, in my face and raised slogans of ‘Jai Shri Ram’. They were asking me to remove my hijab again and again. I was so enraged, especially when they asked me to remove my headscarf then and there itself,” she said.

“I wasn’t scared at all after the incident. I was standing for my rights. But my mother and father feared a lot as I’m a girl. Because I might have unintentionally made enemies,” Khan said about how she felt.

When The Wire asked her what the headscarf means to her, Muskan said, “Hijab is my first priority. No one is forcing me to wear it. It’s my right, my dignity and my respect. I can never leave it. I feel safe wearing it.”

In a message to not just hijab-clad Muslim girls, but to all the young women, the teenage student said, “Don’t be scared of anyone. Remember God during times of difficulty, pray to him. He honoured me with so much respect in the whole world. He’ll do the same even to you. Just be strong and fight for your rights.”

Videos of Khan have been going viral on social media and she has received praise for her courage. She is being hailed as an icon of resilience – not just for Muslim women fighting against the hijab ban – but also for all women refusing to surrender or give up for their rights.

When asked if any complaint or action was made against the group of males from her college who heckled her, she said, “No, how could that happen? They are my brothers. I would never do that to them. Today, they’re a little misguided but tomorrow they’ll realise and come back to the right path. I have faith.”

Muskan’s father Hussain Khan had earlier told The Wire, “When she went near the college, she called and told me that there’s some uproar. I told her not to worry and just go bravely inside.”

Khan said her teachers came to her rescue and said her safety is their responsibility. “They asked me to come to college like before. My principal said that the men wearing saffron shawls were outsiders and assured me that next time, something like this wouldn’t happen,” she said.

According to Hussain Khan, who is the owner of a gym in Mandya, the college authorities were unaware of the men, who “barged into the college” wearing saffron shawls and chanted ‘Jai Shri Ram’.

Khan, who is a second-year student of commerce, said she aspires to be a lawyer. “I first want to solve this ongoing matter and then think further about it,” she said, replying to why she wants to be a lawyer.

Talking about her inspiration in life, she said, “My parents are my inspiration. They’re always with me.”

Images and visuals of Khan bravely resisting the right-wing mob were widely shared on social media. Several people started using her image as profile pictures and posted it on their status.

Following this, a pro-Bharatiya Janata Party (BJP) propaganda website ‘Kreately’ – promoted by Kapil Mishra – tried to defame her. It morphed Khan’s face on to another image of a young woman in jeans – to claim that she normally did not wear a headscarf.