The law, as it stands, allows for the current admission policy of both BHU and AMU. The Central Educational Institutions (Reservation in Admission) Act, 2006 provides the legal framework for the reservation of seats. Credit: PTI At a programme in Kannauj, Uttar Pradesh on June 25, chief minister Adityanath had directed jibes at opposition parties and said, “If the BHU can give it [reservation] to Dalits and backward classes then why can’t Aligarh Muslim University and Jamia Millia Islamia do the same?

Interestingly, similar questions were raised by the RSS ahead of the 2017 Uttar Pradesh assembly elections. Adityanath’s remarks have come a few months after massive country-wide protests by Dalit groups and at a time of increasing bonhomie between Samajwadi Party leader Akhilesh Yadav and BSP chief Mayawati. The remarks sound like a desperate attempt by the ruling party to prevent the merging of anti-BJP minority and scheduled caste votes.

Although the timing and nature of Adiyanath’s statement seem to be well thought out, let us attempt to answer the chief minister’s question.

Reservation in BHU but not others?

The Central Educational Institutions (Reservation in Admission) Act, 2006 provides the legal framework for the reservation of seats. In its preamble, it states that the Act is framed “to provide for the reservation in admission of the students belonging to the Scheduled Castes, the Scheduled Tribes and the Other Backward Classes of citizens, to certain Central Educational Institutions established, maintained or aided by the Central Government…”

Two important conclusions can be drawn from this. The first is that this law provides for reservation in admission to central education institutions either established, maintained or aided by the Central government as defined under Section 2(d). Therefore, the likes of DU, BHU as well as AMU, JMI and deemed universities would fall within its ambit.

The second is significant. The preamble uses the words “certain” to qualify central educational institutions, essentially indicating that exemptions exist.

–a university established or incorporated by or under a Central Act;

–an institution of national importance set up by an Act of Parliament;

–an institution, declared as a deemed university under Section 3 of the University Grants Commission Act, 1956 (3 of 1956) and maintained by or receiving aid from the central government;

–an educational institution set up by the central government under the Societies Registration Act, 1860.

Section 3 provides the framework and percentage breakdown of reservation for different social groups, whereas Section 4 contains the exceptions to it. It lays down the rule that there shall be 15% reservation for SC, 7.5% for ST and 27% for OBC out of the total strength in each branch of study or faculty. 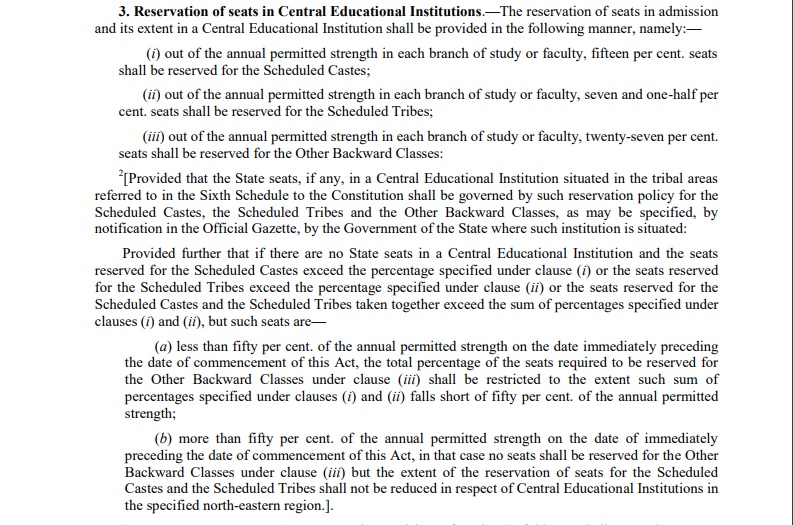 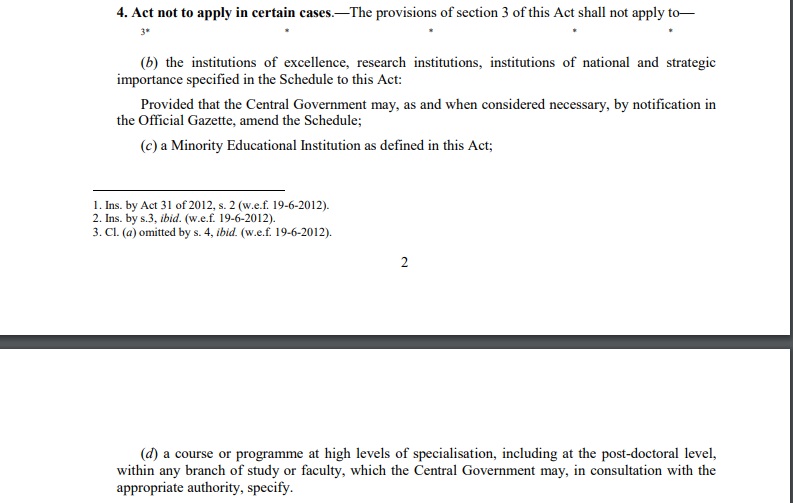 (b) A Minority Educational Institution as defined in this Act;

From all of the above, which forms the crux of the law of the land on reservations in admission in central educational institutions, it is clear that:

–Reservation in admission is a mandatory provision for all the educational institutions covered by the law. Therefore, the suggestion that AMU should provide such reservations because BHU does, is misleading. BHU’s adherence to the policy, though praiseworthy, is to be expected from a leading central university.

–Certain educational institutions have been granted exemption. These include minority institutions. Thus, the debate of ‘why is one institution following the rules and not the other’ doing the rounds on TV and social media is flawed. The law, as it stands, allows for the current admission policy of both BHU and AMU.

Of course, the entire debate hinges on whether or not AMU and JMI are minority educational institutions. If they are not, then not falling under any other exemption, they would be subject to the law as discussed above.

In AMU’s case, its status as a minority institution has been controversial. Since 1967, it has been fought in the courts. In the appeal before the Supreme Court, an order issued on May 25, 2006, by a two-judge bench noted that ‘As regards all other matters regarding appellant institutions, status quo will be maintained from the filing of the writ petition before the High Court.’ As a result, AMU remains a minority institution.’ 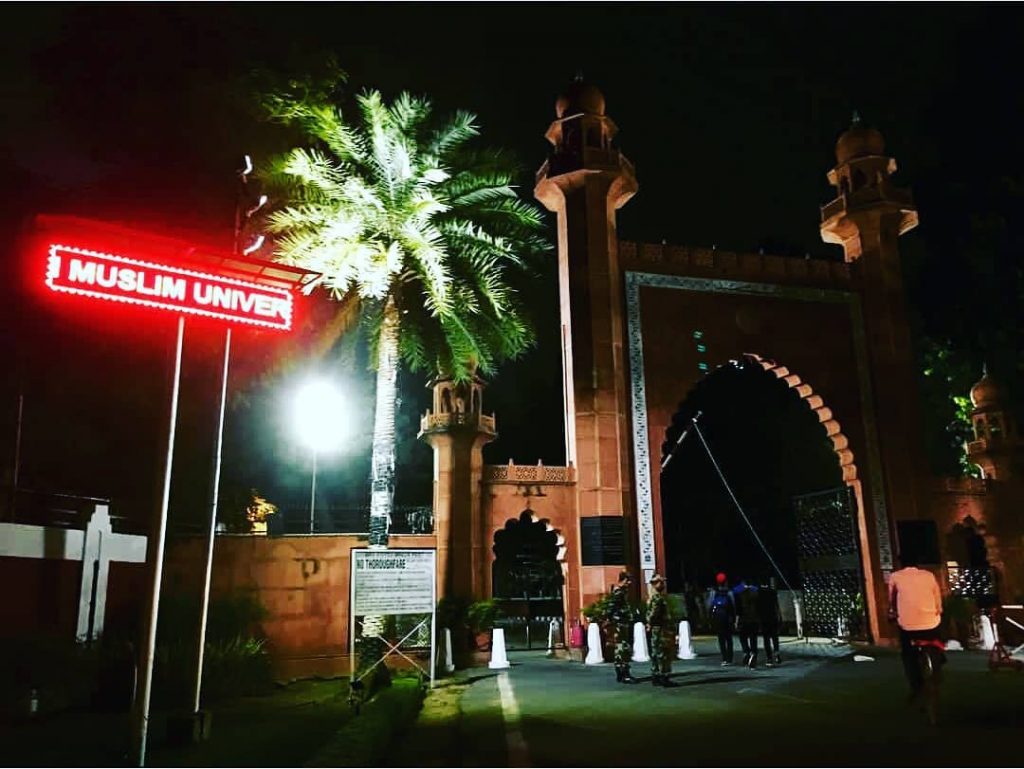 Why this exemption? What kind of equality does the constitution envisage?

Yes, the law grants exemption, but is it not against the principles of equality? Article 14-18 of the constitution of India provide for the right to equality. In particular, Article 14 says that the state shall not deny to any citizen equality before law and equal protection of law.

However, the constitution framers did not contemplate formal equality i.e that there should be no discrimination on any grounds whatsoever – rather, the rule is that ‘like should be treated alike and not that unlike should be treated alike’, also known as substantive equality. The rationale behind it has been explained by an 11 judge bench of the Supreme Court in the case of T.M.A Pai foundation & Ors. vs State of Karnataka through the example of a family, as “all members do not have the same constitution, whether physical and/or mental. For harmonious and healthy growth, it is natural for the parents, and the mother in particular, to give more attention and food to the weaker child so as to help him/her become stronger. …conferring certain rights on a special class, for good reasons, cannot be considered inequitable. All the people of India are not alike, and that is why preferential treatment to a special section of the society is not frowned upon.”

Can minority status of an aided minority educational institution be annihilated?

Article 29(2) in the constitution requires that where an educational institution is receiving funds out from the state, no citizen shall be denied admission on the grounds of religion, race, caste or language. In the T.M.A. Pai foundation case, the court considered if a minority educational institution receives aid-in-grant, its right to grant admission to students of its choice under Article 30(1) can be limited and in effect minority character annihilated. In deciding this, it first referred to the St Stephen’s College vs University of Delhi case wherein it was held that “The fact that Article 29(2) applies to minorities as well as non-minorities does not mean that it was intended to nullify the special right guaranteed to minorities in Article 30(1)”.

The court in the T.M.A. Pai foundation case further held that “The word ‘only’ used in Article 29(2) is of considerable significance and has been used for some avowed purpose. Denying admission to non-minorities for the purpose of accommodating minority students to a reasonable extent will not be only on grounds of religion etc but is primarily meant to preserve the minority character of the institution and to effectuate the guarantee under Article 30(1)…”

Thus, the position is clear. Despite falling under the purview of Article 29(2), an aided minority educational institution cannot be made ‘minority’ in name only.

Let us assume that Article 15(5) did not exempt minority educational institutions i.e the law made by the state for providing reservation in admission to socially and economically backward classes, SC, ST was applicable to minority institutions as well – what would be the result? The minority character of institutions protected under Article 30 (1) may be affected.

This point has been made in Pramati Educational & Cultural Trust vs Union of India, (2014) 8 SCC 1, in the following words:

“In other words, the minority character of the minority educational institutions referred to in clause (1) of Article 30 of the Constitution, whether aided or unaided, may be affected by admissions of socially and educationally backward classes of citizens or the Scheduled Castes and the Scheduled Tribes and it is for this reason that minority institutions, aided or unaided, are kept outside the enabling power of the State under clause (5) of Article 15 with a view to protect the minority institutions from a law made by the majority.”

As per the data collected by the National Institutional Ranking framework (NIRF) in 2016-17, the total number of students studying in various undergraduate and postgraduate courses at AMU stood at 17,259. Of these, 3,180 students hail from ‘socially challenged categories (SC, ST and OBC), whereas 14,011 are from ‘economically backward classes’. Therefore, there are a sizeable number of both socially backward as well as economically backward class students studying in AMU, albeit lower, but in the whole scheme of things the university is playing a significant role in educating the underprivileged youth.

The reservation policy, the law and the rationale behind exemption of minority educational institutions has passed the Supreme Court’s test. We as a society must recognise those reasons and especially so in constitutional offices.

Wajahat M. Jilani is a fourth-year law student at the Faculty of Law, Aligarh Muslim University.