Welcome to Meghshala, the School on the Cloud

Meghshala creates engaging lessons adhering to the national syllabus, uploads them into the cloud and has teachers invoke them in classrooms using tablets and handheld projectors. 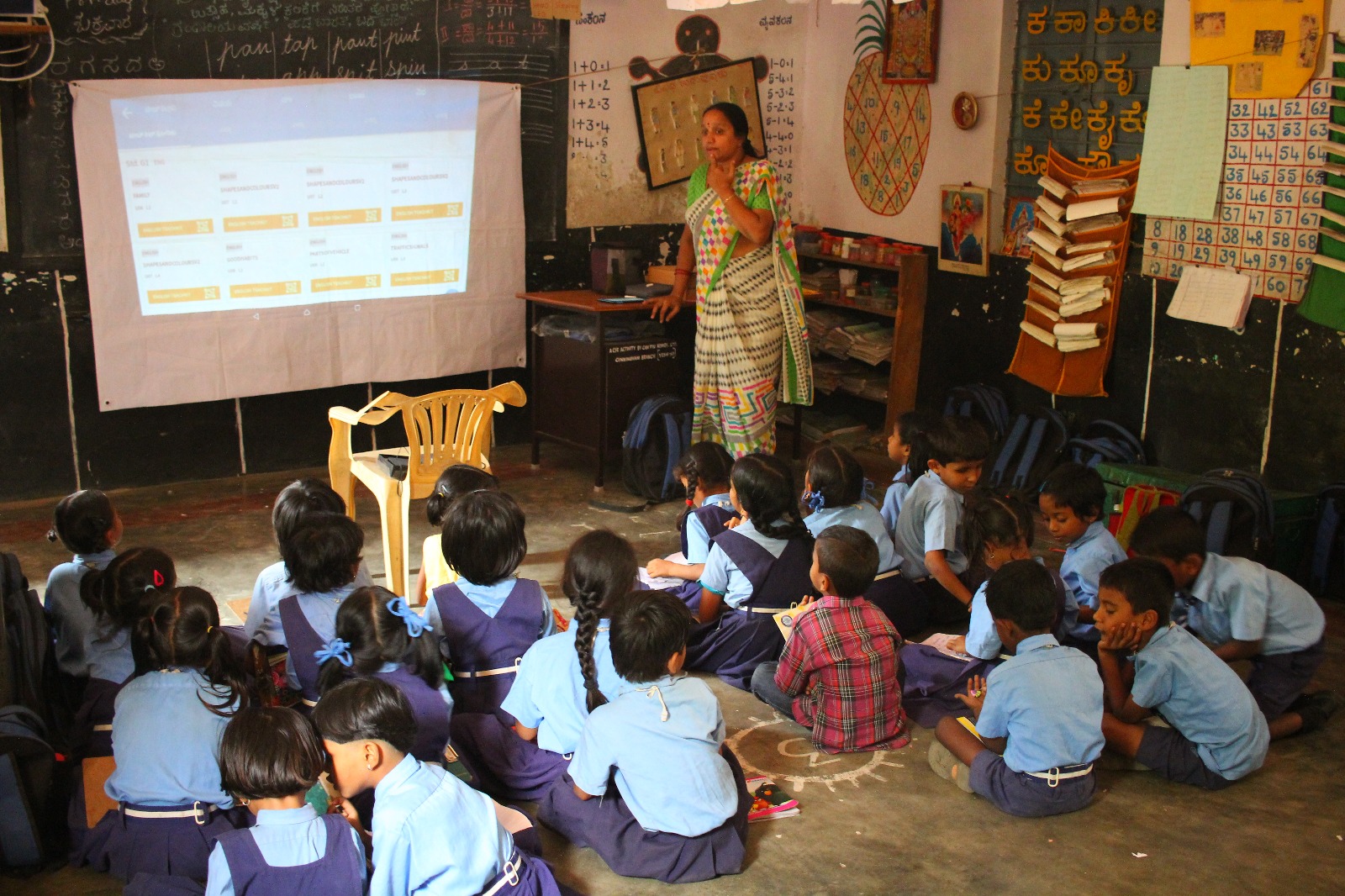 Conventional parenting wisdom asks us to keep children away from gadgets, especially phones and tablets. But sometimes a tablet can do wonders and actually go a long way in educating a child. Ask the young, dedicated team that works with the Bengaluru-based social education startup Meghshala. They will tell you how their tablet-based ‘teach kits’ have gone a long way in making lessons interactive and stimulating for many government-school students across the city and surrounding rural areas.

At the GHPS Nagasandra, a government-run school near Peenya, outside Bengaluru, the eighth graders are attending a commerce and mathematics class, getting a lesson in value added tax (VAT). What makes this lesson different from the standard chapter in the Karnataka SSC curriculum is its execution. It’s being taught with the help of one of Meghshala’s multimedia kits, and it takes the learning level several notches higher.

Meghshala is a not-for-profit trust based on a learning management system called CloodOn; the whole thing is hosted in the cloud. The trust was founded by former physics and math teacher Jyoti Thyagarajan and tech-entrepreneur Sridhar Ranganathan. Meghshala (Hindi for ‘school on a cloud’) trains teachers in government schools across Bengaluru’s urban and rural areas to facilitate better learning and enhance classroom experiences through its teaching tools.

Its secret sauce is the Teachkit. Each of these kits is written by a ‘master teacher’ in its team in an effort to “bring thoughtful pedagogy to the curriculum,” as Thyagarajan put it. These come packed with content that includes videos, class activities, fun examples and questions designed to make students think out of the box and understand concepts better.

The Teachkits are uploaded to the cloud and downloaded from there into individual teachers’ tablets, and then used in the classroom through handheld projectors. Meghshala accesses these two pieces of hardware from retail suppliers.

Meghshala’s lessons follow the national curriculum and are divided into individual subjects that are further split into units. Each unit comprises lessons that are uploaded to CloodOn. “It helps the teachers that our content exactly follows the textbook, so if chapter 8 is on perimeters, our content will also be the same,” according to Prasanth Nori, an implementation manager with the Meghshala Trust. “The chief difference is that our content has been enhanced, tweaked and twisted around with examples, questions, images and illustrations.”

Teachers access a Teachkit on their tablets and then project a lesson on the blackboard or a wall. Meghshala conducts training sessions for them to figure out how best to use these lessons in their classes. According to the software’s creators, there’s a lot of work put into the back-end to maximise the lessons’ usability and impact. The team tracks how each teacher uses the app when she logs on, and are also constantly analysing the data to understand patterns that could help improve lesson effectiveness and efficacy.

For example, the average hours of usage per teacher has risen from 3.2 in July 2016 to 5.4 in January 2017 – except during October and, when exams are commonly conducted and have limited instructional days.

Government schools have been provided with teaching tech earlier but Meghshala has been able to cut ahead because it has made a point of handholding users through its Teachkits, at least during the initial phase. Members of the organisation regularly visit schools to observe the Teachkits being used in real-time, and make themselves available to the headmasters and teachers who use them for support.

A fair amount of thought also goes into the user interface and experience. The visit to GHPS Nagasandra is an observation day for Nikita Biyani, a designer and editor with Meghshala. She’s there to see if the overall design of the lesson, from illustrations to the colours used, actually works in the classroom.

Meghshala Trust is part of Thyagarajan’s dream to enable education for all – especially in the rural areas. According to the Annual Status of Education Report 2014, half of all children in rural India who have completed eight years of schooling still haven’t learned basic arithmetic, just to quote one dismal instance.

That her impact as a teacher could’ve been more struck Thyagarajan when she was nearing retirement. “I’ve always worked in elite schools – Mallya Aditi, Stonehill International School and in schools overseas – and over the course of 35 years [might have] graduated 600 children. And I thought to myself, I’m known to be a good teacher. I should be teaching more kids!”

Thyagarajan then found a solution to the question of reach in the platform developed by Ranganathan, whom she met at an education conference. “We are talking 60 million kids out there and the only way we can scale it up and educate everyone is through technology,” she said. Empowering and training teachers to bring innovative learning methods to increase student participation and retention remains the most viable solution. 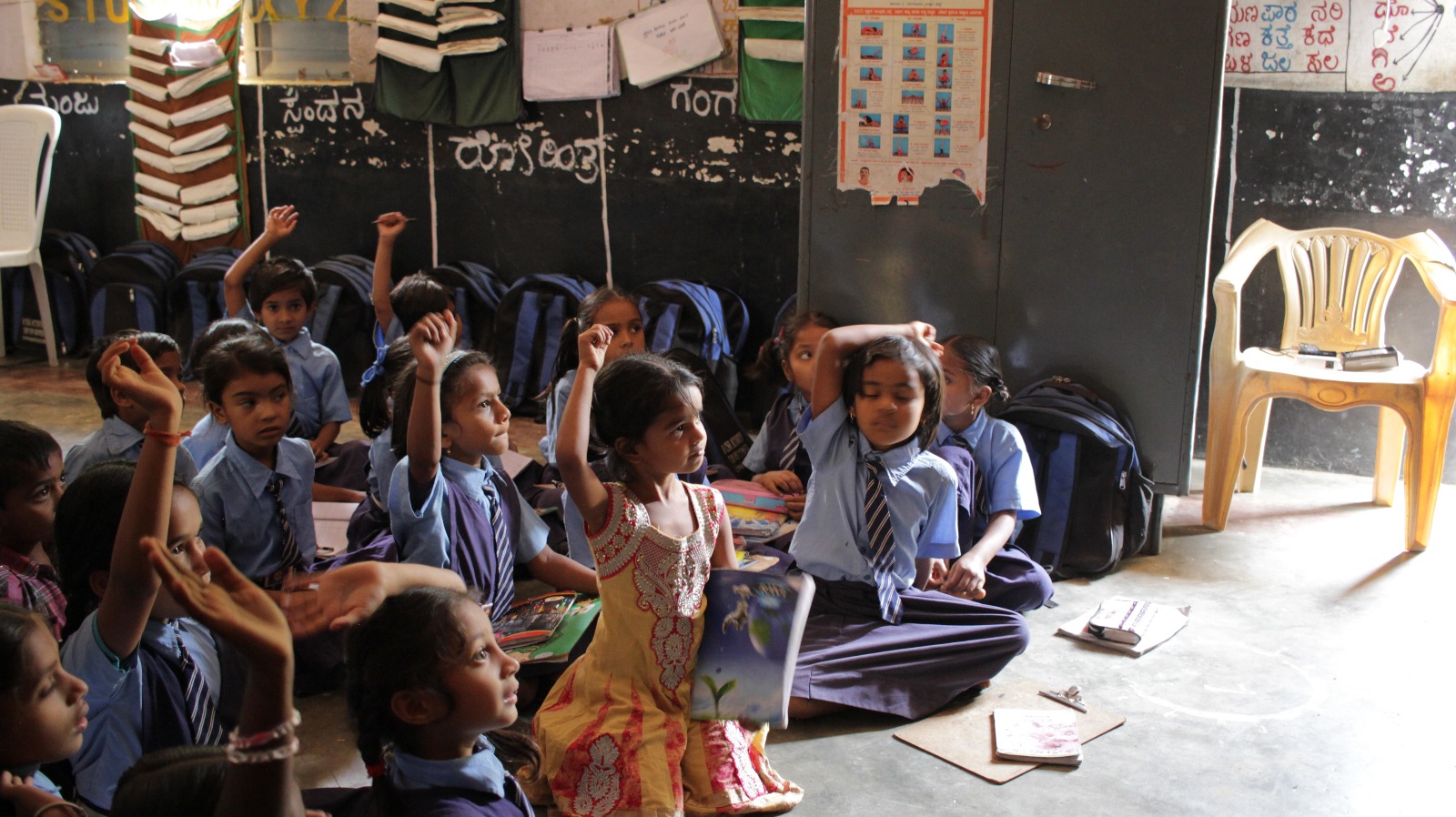 Of course, it helps to have an enthusiastic team by her side, and the one at Meghshala is young. Many of them, like Nori, have worked in the Teach For India programme, and bring insights about the Indian education system relevant to the bottom of the pyramid. They also have a passion for teaching.

The idea in action

Over the little-over-two years for which Meghshala has been around, it has managed to reach 130 schools across urban and rural areas around Bengaluru as well as other parts of Karnataka. The app – a free product for teachers – currently has more than 300 users, which shows that interest has only been peaking. “It’s a prestige issue for the teachers as well, knowing they have access to newer ideas and tools,” Nori pointed out, adding that “a whole bunch of teachers have even gone and bought their own tablets to access the app.”

The teachers for Meghshala are selected based on the team’s interactions with the block education officer. Sometimes, the teachers surprise the team with their ability to think beyond the usual, to push the technological envelope further. Thyagarajan mentioned a teacher who used the Teachkit to increase student participation in class thus: “She clicked a picture of the student’s work, projected it on the board and asked the student to share and explain his work with the class. It’s an amazing way to keep the students engaged.”

Access to the ‘best practices’ of teaching – such as including graphic aids to help students organise their thinking – packed into the Teachkits has helped teachers create an engaging classroom environment and also upgrade their own skills, despite the initial challenges in adapting to them. Recently, one teacher explained the concept of constellations by downloading a video about the universe, putting it on the tab and starting the lesson with it – instead of simply reading from the textbook as usual. This was after attending a few of Meghshala’s training sessions where she saw others put the tablet to creative use. It was a significant change in mindset.

The Teachkits have enabled a demonstrably greater level of teacher involvement. Tara K., who teaches at GHPS Nagasandra and has been a government schoolteacher for a decade, has a fairly positive assessment of its lesson plans, which even come with a time distribution to make it helpful for the teachers using them. “The addition of videos make it interesting and motivational for the students, especially in understanding science concepts such as friction, atom and molecules, life on Earth, etc. Otherwise these classes can get monotonous. The group activities are good as even children in the last benches tend to pay attention and get involved.”

The school’s headmaster, H.R. Kodanda Ram, said the Teachkits have reduced the burden on the teacher: “They are more creative and visual, keeping the children engaged in class.”

The startup operates in rural areas of Karnataka like Koppal, Balpa, Mudhol and Raichur. In Raichur, they’re partnered with an NGO.

Is there a difference in the acceptance and usage of the Teachkits in rural and urban areas? Surprisingly, yes. According to the team, Meghshala’s intervention finds greater and faster acceptance in rural areas, where access to extra resources is limited. The schools they visit are also supported by other partner organisations that help in better implementation. Thyagarajan thinks many government schools in the city suffer from ‘NGO fatigue’, adding, “Village schools, on the other hand, are delighted when Meghshala walks into their school to help teachers teach better.”

Their monthly operating cost is Rs 12 lakh, sometimes more. “It is primarily funded by the Tata Trust. Other revenue sources are primarily CSR funds, with some companies like T.T.K. being exceptionally generous,” according to Thyagarajan. She also hopes that, in the future, “the state governments will pay for the implementation through their budget item for the year’s teacher training.”

Its success is owed to its team’s projecting Meghshala as more than just content for teachers. It was recently named among the top 20 of the all-India MEA-NITI Aayog Social Innovation Contest, organised by the Ministry of External Affairs. In March 2017, the team was invited to talk to the Ministry of Human Resource Development about entering as many states in India as possible. As of now, they are already in talks with three state governments, quite helpful considering their goal is to reach 100,000 teachers by 2020.

The hope is that an innovative solution like the one offered by Meghshala will help turn around poor attendance figures, equally poor comprehension levels and higher-than-desirable dropout rates gradually. The platform is also an example of how tech innovations can be harnessed for the greater good and help children get access to quality education – which should ideally be a basic right for all.

Reshmi Chakraborty is a freelance writer. She is interested in stories of innovation and change across various areas.