Odisha Prof Out of a Job for Talking About Kashmir, Army Brutality on TV

In a discussion on the Odia channel Kanak News, Madhumita Ray had said that military action or war with Pakistan would not make things better in Kashmir.

New Delhi: An assistant professor at the Kalinga Institute of Industrial Technology (KIIT) in Bhubaneswar was told to resign from her post after she appeared on an Odia TV channel discussion on the Pulwama attack and said that India should not go to war with Pakistan.

The founder of KIIT, Achyuta Samanta, is a Biju Janta Dal leader and a Rajya Sabha MP from Odisha. Kanak News, which aired the discussion, is owned by BJD Rajya Sabha MP Soumya Patnaik.

What happened on TV

“Kanak TV had invited me for the 10 pm show, along with a colonel from the army. He was talking in favour of a war with Pakistan. I was asked to give my views, so I protested and said in 70 years, we have fought many wars with Pakistan and they have never solved anything. All over the world, wars are fought and they don’t solve anything,” Ray told The Wire.

“The colonel said that everlasting peace can only be brought about by war. In response, I quoted Gandhi, who had said that ‘an eye for an eye will make the whole world blind’. We are talking about a war to avenge 40 soldiers, but this will just lead to more soldiers dying, both Indian and Pakistani. This is not going to help anybody,” she continued.

Ray told The Wire she then went on to argue that war is bad for the economy and for the poor, as resources will be diverted from schemes for them. This will only help arms dealers in the US and Europe, she said, highly decorated army officers like the colonel and political parties who need the rhetoric. It will not help the soldiers. 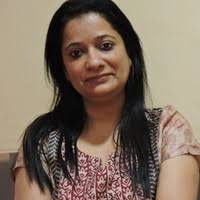 “The colonel then said that the army is a harbinger of peace and has fought for peace all over the world. I said let’s not talk nonsense, all armies – whether Indian, Israeli, Palestinian, American or Pakistani – all armies are exploitative. He then asked me what I was suggesting about Kashmir, and I said we should engage with the people. Because if we don’t engage with the people and there is no political process, the state cannot have the trust of the Kashmiris.”

“I said that the army has exacerbated the situation not just in Kashmir but also in the Northeast. He said what do you mean, so I replied ‘Can’t you see what Irom Sharmila did for 16 years because of army excesses?’ There have been cases of soldiers raping women in the Northeast and in Kashmir, she had said. “And they are not even paying for this.”

Ray then said on the show that since India is not under military but democratic rule, there should be a democratic dialogue on Kashmir headed by politicians and not the army. “I told him that I could say all of these things only because I thought we were living in a functional democracy.”

The colonel replied, according to Ray, by calling her an “anti-national” for her views about Kashmir and the army. “I said if my asking for peace and asking for a political process in Kashmir is anti-national, if wanting to win over Kashmiri people makes me anti-national, then I am happy to be anti-national. I also said that I think he is the anti-national for being a colonel who does not see that he has a certain responsibility, instead of baying for people’s blood and encouraging a war that will not help anyone.”

This episode of Manoranjan Mishra Live is not available on the Kanak News website. When asked, the editor of the channel who was anchoring the show, Manoranjan Mishra said that the channel received a lot of “negative feedback” and has not yet taken a decision on publishing the show. Ray told The Wire that the show was removed because of negative comments and threatening calls to the channel’s office.

“After the Pulwama attack, there has been a hue and cry and an unnecessary nationalism hype. It is a natural reaction. People called me asking why this lady is speaking against our army. Nobody threatened me, but there was a sentimental explanation. There was one threatening call, but I think that was a spontaneous outburst.”

Also read: Narendra Modi Knows War With Pakistan Is Not an Option

Mishra told The Wire that the channel had not decided about putting the show online because of this adverse reaction. “It is not an ideological decision on our part, we don’t have any politics attached to it. But we don’t want to create rumours that this channel is hurting the army’s sentiments. There were two martyrs (in the Pulwama attack) from our state. So sentiments are high. People will not take comments against the army easily. We are not invested in any liberal, anti-liberal or right-wing philosophy.” 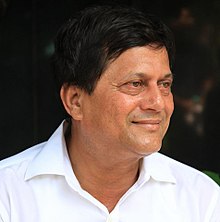 Two days after the show aired, Ray says she was summoned by the disciplinary committee of her university. She met with the committee on January 20. “I was told that people were offended because of the things I had said against the army and against war, and that my views were not popular among the people. They said that there are people in very powerful positions who are offended with what I have said,” Ray told The Wire.

“I preferred resigning to having my freedom of speech and expression curbed, so I resigned. I was told that I had to leave within 24 hours, even though I am a regular employee and my contract says I have a notice period of one month. I was asked for a resignation, which I submitted. The next morning I got a message saying my resignation had been accepted, and within 15 minutes I had a man from HR in my room asking me to sign the relieving letter. I did not want to engage with anyone after that, so February 21 was my last day.”

On being asked about Ray’s departure from KIIT after the show, Mishra said it was “quite unfortunate”.

The colonel, however, said it was good she had lost her job. “I am very happy,”, he told The Wire. “I had warned her then that she should not say such things. She is an anti-national.”

New rules at the university

The university has not stopped at ensuring that Ray no longer has a position there. On January 22, the office of the founder, Achutya Samanta, issued an ‘advice note’ to the university’s faculty and staff, asking them not to make “loose comments on any matter before the other staff and before public”.

In the future, staff members have to take prior permission from the university’s director of public relations “before sharing anything with media or beyond media”, the note, a copy of which is with The Wire, says.

I have been getting information, how the senior functionaries are in the habit of making loose comments. Secondly all staff are hereby once again requested to work as per the working guidelines particularly with respect to sharing any  comment on sensitive matters, especially on media. Staff those who are participating in different group discussions, etc. Before sharing anything  with media or beyond media they have to take prior permission from the Director, PR for their own safety, security and interest of the organisation. In another ‘advice note’, issued on the same day, five staff members were listed who would be in charge of “legal issues, liasoning work with police, state government and public sector undertakings as well as press and public relations, etc. in the interest of the organisation”. 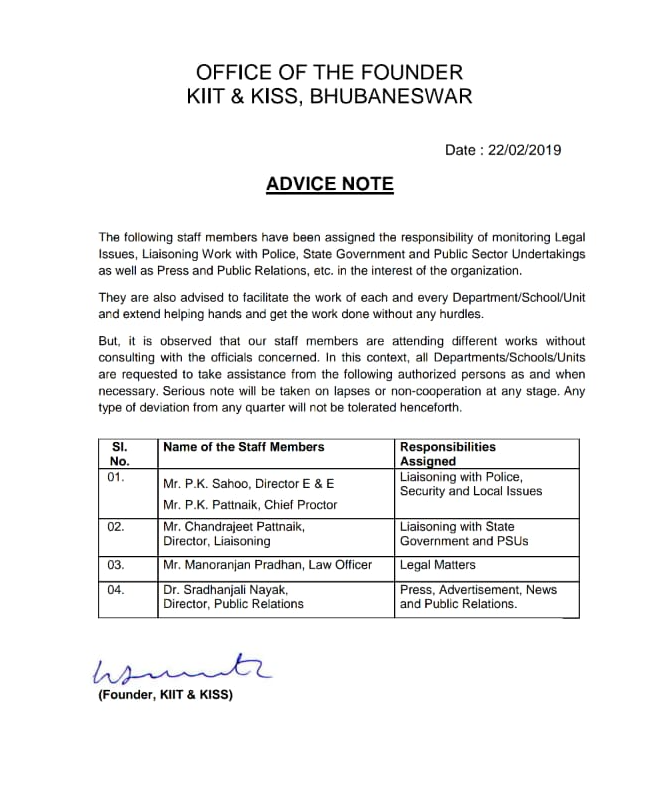 The Wire reached out to Dr Sradhanjali Nayak, director of public relations at KIIT, asking her to comment on Ray’s removal and the subsequent notice sent to the staff. She replied that “she has resigned citing some personal reason as per the information received from HR of our institute!”.

Ray confirmed to The Wire that she kept her resignation letter brief and simple as she did not wish to engage with the issue after her meeting with the disciplinary committee.