The Coercive Pacification of Kashmir's Campuses Does Not Guarantee Peace

The restrictions on the right to association, representation and non-violent agitation must be removed.

A Kashmiri student throws a piece of stone during a protest in Srinagar April 17, 2017. Credit: Reuters/Danish Ismail 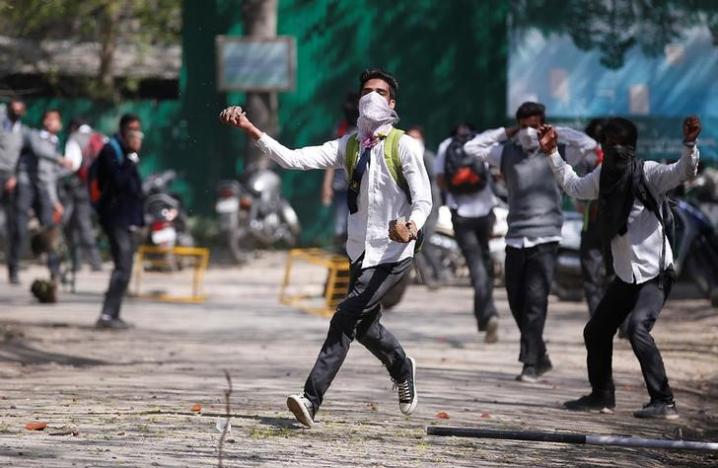 A Kashmiri student throws a piece of stone during a protest in Srinagar April 17, 2017. Credit: Reuters/Danish Ismail

Thousands of Kashmiri college and university students were on the streets last week, responding to the shutdown called by the banned Kashmir University Students’ Union. According to media reports, students marched and raised pro-azadi slogans. Clashes between students and security forces also erupted at some places. As a student of the Kashmir conflict, this is a matter of concern – but not surprise. In a region with an alarmingly high dropout rate at the secondary level, students enjoying the privilege of making it to colleges and universities are ostensibly ‘mainstreamed’. They have books in their hands, not stones. But these events prove that alienation in Kashmir does not stop at the campus gates. The binary between the stone-pelter and the ‘mainstreamed’ youth ignores the ground reality in the Valley.

Exactly one year ago, I was at Kashmir University (KU) with a simple research question: How do students in higher education understand the Kashmir conflict and participate in it? Back then, Burhan Wani was alive. There were no student demonstrations reverberating with azadi slogans and stone pelting. The seemingly calm university was buzzing with regular campus chatter. The postgraduate students I spoke to, mostly Kashmiri Muslims, talked passionately of Kashmiriyat, proudly representing their beautiful land to be the secular melting pot of Shaivite and Sufi cultures. They talked about Rajatarangini and Habba Khatoon. Their Kashmiriyat, however, was weighed down by a sense of victimisation when they reflected on the past three decades.

Student life has been hit by cycles of violence and shutdowns, with classes being suspended for weeks if not months. However, for a generation who grew up in the most violent phase of insurgency and militarisation in Kashmir, learning terms like ‘crackdown,’ ‘bunker’, ‘disappeared,’ ‘curfew’, ‘hartal’, ‘encounter’, ‘torture’ and ‘kain jung‘ (stone war) did not require formal education. Many of them recollected brutal violence perpetrated on civilians during counter-insurgency operations. Others had lost close ones to militant firing. Students from downtown Srinagar expressed the fear of being arbitrarily locked up under the Public Safety Act, like some of their friends had been. The collective, traumatic memory of this generation has created a monolithic and violent caricature of India as an occupying power.

Unfortunately, colleges and universities have not provided a secure space for students to reconcile with their precarious and confusing learning environments, past and present. All aspects of higher education in Kashmir have been securitised. Their authorities have curbed any expression on the Kashmir conflict, exercising top-down control over curriculum, academic spaces and student politics.

Curriculum is sanitised of discussions on the conflict and its complex geopolitical, constitutional, social and historical dimensions. The disputed nature of Kashmir finds no mention in it. This also applies to research work and public discussions: students have never witnessed a college seminar on a theme related to the Kashmir conflict. Some students who were eager to pursue research on the impact of conflict on Kashmiris were deterred and their proposals rejected. The human rights diploma offered by the KU law faculty was abruptly discontinued a few years ago. Students’ enthusiasm was then red-flagged as a ‘security concern’.

Higher-education authorities have also stifled student activism and unionism by placing strict restrictions on democratic representation and association in colleges and universities. A research scholar expressed the risk of being vocal, saying, “If we are part of a demonstration criticising any government policy, we can be booked for being involved in anti-national and anti-state activities … Our careers can be destroyed.”

By creating a vacuum between learners and their conflict-ridden learning environment, authorities have reproduced conflict. Students see their colleges and universities as structures of suppression. As one student put it: “First the Mughals and Afghans, then Dogras, now India. Kashmir has never been ruled by Kashmiris.” Students find affinity with the sentiment of azadi, not only as the expression of a right to self-determination, but importantly, a metaphor for liberation from the ‘occupation’ of young learning minds.

Political dialogue is the most viable non-military strategy to achieve peace in Kashmir. We need to re-imagine the role that our colleges and universities can play in facilitating this. Higher education infrastructure has expanded significantly over the last 15 years.  While it absorbs only a small minority of the youth – the gross enrolment ratio in the state is 24.8% – the number has been increasing over time. An empowered, educated and sensitised political community is potentially a strong party to this dialogue. It must directly engage with the large majority of the youth who are on the streets. Traditionally, youth agitations have been led by separatist political forces, primarily the Hurriyat Conference. Wani’s death has changed this. Pro-azadi demonstrations are now spontaneous and do not wait for the diktats of political elites. The youth are their own leaders now.

It is in the interest of the Indian government to strengthen the politically weak and unorganised student community. This requires the democratisation of higher education institutions. Students must have the freedom to discuss and research on the complex realities of the Kashmir conflict in their academic spaces. The restrictions on the right to association, representation and non-violent agitation must also be removed. The coercive imposition of stability in campuses has surely pacified students. But as was evident last week, pacification does not guarantee peace.

Mashhood Alam Bhat is a researcher at NUEPA. He works on themes of education and conflict.