Postcards to the PM: Why Students' Solidarity With Kashmir Is Significant

The simple act by students of St Stephens will show the Kashmiris that there are people who have not abandoned them. 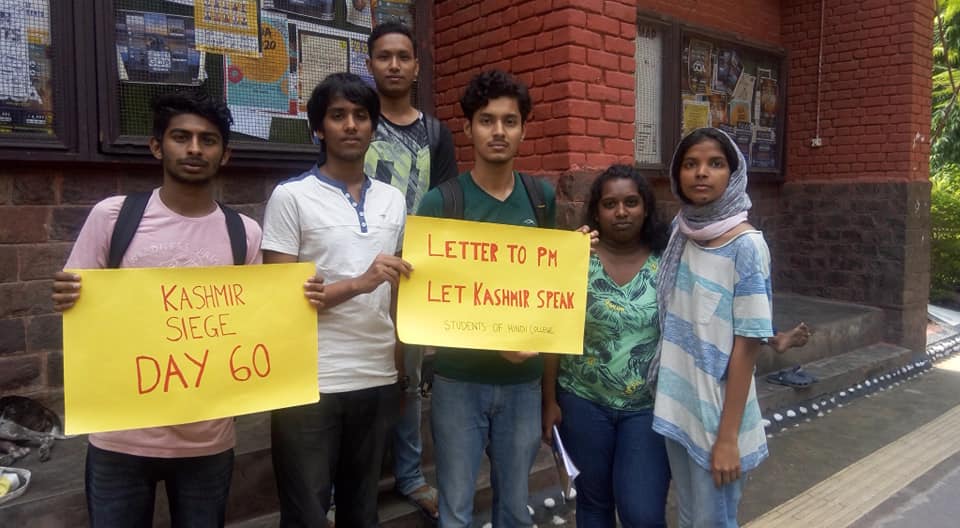 Some of the students who sent a postcard to the prime minister. Photo: Facebook/Ashley N.P.

When our sisters and brothers in Kashmir are going to recall these dark months 20, maybe 30 years from now, there will no doubt be so many wounds which would not have healed. Those wreaked by the cynical machinations of the ruling establishment which accomplished a constitutional coup robbing from them the protections guaranteed when they joined the Indian union. Wounds inflicted by the violent excesses of the men in military fatigues toting guns who shadowed their daily lives. Wounds exacted by the months of pitiless lockdown and internet blockage.

But I am convinced that even more than all of this, the festering lacerations on their souls which will be hardest to repair would be those that were perpetrated by the celebrations of millions of ordinary Indian people as the Kashmiri people suffered all of this, rejoicing as though after a victory over a restive enemy people; and the silences of millions of other Indians.

It is this which made a collective gesture of empathy by a bunch of young students in a college in Delhi so special. There are many students from Kashmir in Delhi’s St Stephen’s College. The shock-and-awe announcement of diluting Article 370 of the Constitution of India and the downgrading of the state of Jammu and Kashmir into two Union Territories was followed by the clampdown on internet and communications in the region. Kashmiri students in the college, as those who studied in colleges in all parts of the country who were brusquely cut off from any contact with the families, were in intense and visible distress.

A lecturer in St Stephen’s College asked a Kashmiri student in class if he was okay. The boy was silent, struggling with his words, then began to cry.

A group of fellow-students resolved that they must do something to assure their Kashmiri classmates that they cared about them in this hour of their grief. It started with a call by a few students on social media for a meeting.

The organisers were surprised that the room filled up with more than 70 students. Many ideas were floated, but students ruled out doing anything which was overtly ‘political’. Students were divided between those who supported and opposed to the dilution of Article 370; but all were united in their disapproval of the communication ban. More importantly, students were strictly prohibited from any political protests, even political meetings on campus.

I was bemused to hear about how the students felt they had to tip-toe, as though walking around egg-shells, in publicly articulating any political position on campus. I had studied in the same college more than four decades earlier, and the college I remembered was quite unlike the college today. The institution was an intensely engaged space politically. Most students were socialists of some kind: the passionate debates in coffee houses and college lawns was about which kind of socialist. Students freely participated in political demonstrations, in college and the university.

But clearly, this was indeed a different college and a different moment in the country’s history. This is what made the students’ actions more remarkable.

The decision they made was to write a set of post-cards to the prime minister of India. They are a generation to whom post-cards are part of pre-history. But still, the idea of writing their thoughts with their own hands on a card for the prime minister which would be open for others to read appealed to them.

More than 50 days after the clampdown, students from the college appealed to fellow students to wear black, tie a red ribbon around their arms, write their postcards and pin or stick these on their bodies. They were then asked to gather under the tree outside the college café, a popular place for students to hang out. Many students assembled in their black kurtas and t-shirts, with moving messages written on 50-paise yellow post-cards stuck to their clothes. No slogans were raised. Students and faculty read the messages, some with curiosity, many in solidarity. 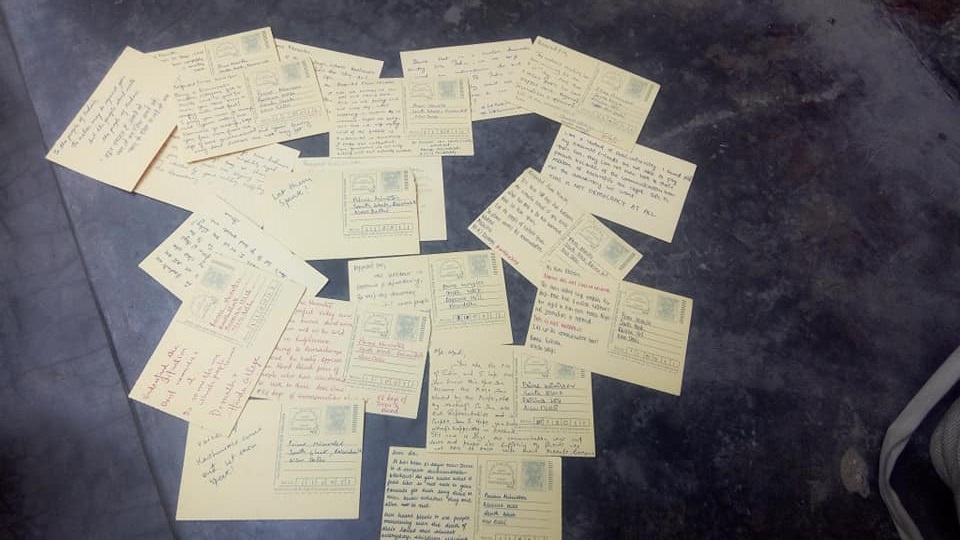 Some of the postcards that were sent to the PM. Photo: Facebook/Ashley N.P.

Was it a protest? Was it a gesture of solidarity for their fellow Kashmiri students? Whatever it was, few could recall a moment like this in college for a long time, in which students showed that they cared.

“Honourable Prime Minister, I have seen classmates of mine crying and having no one to listen to them. I have also seen people counting the days to be able to communicate to their families but all in vain. The tears and messages hit us hard but we feel miniscule in this process. Having said and shared all of this, I urge you to uplift (sic.) the communication ban.”

“Dear Mr PM, I have classmates who belong to Kashmir. Seeing their faces just makes me feel badly about the present condition. I cannot imagine how enraged I would feel if someone did that to me. Think of it, Sir. What if you didn’t know if your parents are alive or dead…”

A long message for the Prime Minister:

“A week ago, I was out with my friends at night and I couldn’t call my parents because my phone battery died… My parents got really worried as they couldn’t reach me for an entire one hour metro ride. I came back home and I could really see how worried they were and they were relieved and happy to see me alive. I have Kashmiri friends who have not spoken to their family and relatives back in Kashmir for about two months now. They are worried about each other, they need to know how they are doing and how their family is doing. If my parents got worried without being able to connect with me for an hour, think about people who haven’t talked to each other in 53 days…”

“Chandrayan II didn’t reach the moon, and nor did my friend’s Eid wishes to her mom back home…’ A Kashmiri student also spoke of the moon – ‘As a country we have managed to reach the moon, but it’s been more than a more than a month since we could reach out to one of our brothers and sisters residing in Jammu and Kashmir. If you do believe that the move is in the best interests of the Kashmiris, do let them speak out about how much it has changed their lives…”

“I live in another part of the same state (Jammu), I can talk with my parents without a miss but my Kashmiri friends are barred from communication since 52 DAYS NOW!! AND YOU ALL SAY EVERYTHING IS FINE? LIFT UP THE COMMUNICATION BAN!! #STANDWITH KASHMIR” 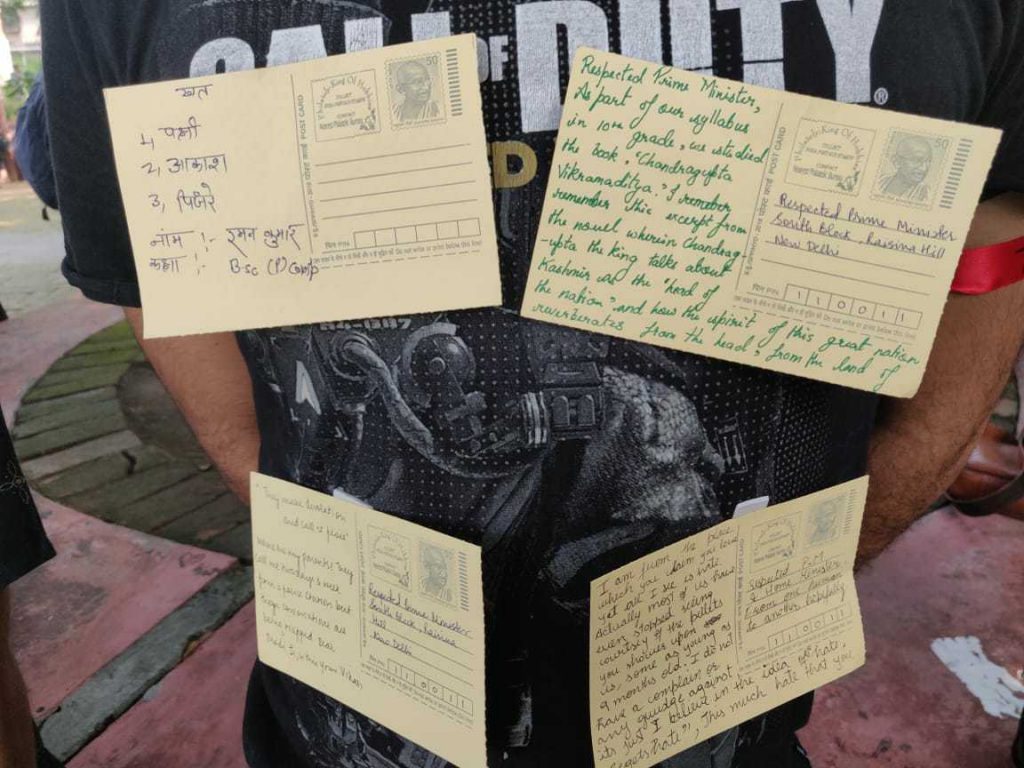 There is a great deal of campus folklore carried forward from one generation of Delhi University students to the next of the rivalry of students from St Stephen’s and Hindu College. But this is one instance in which, inspired by the students from the college on the other side of the road, students of Hindu College also wrote their own postcards to the prime minister.

N.P. Ashley wrote a post on social media about how moved he was by this ‘improvised student collective of empathy, compassion and understanding’. He said, “Maybe my generation is bound to learn from college and school students a lot of things, and not just climate issues.”

I have no way of knowing if Prime Minister Narendra Modi read any of the postcards sent by the students of St Stephen’s and Hindu College, and if so, what he felt. But many more weeks after the students’ postcards were sent, there is still no sign of the internet blockade ending.

The students’ post-cards about Kashmir to the prime minister remind me of the ‘Postcard from Kashmir’ by poet Agha Shahid Ali. He wrote poignantly:

Kashmir shrinks into my mailbox,
my home a neat four by six inches.

I always loved neatness. Now I hold
the half-inch Himalayas in my hand.

This is home. And this the closest
I’ll ever be to home. When I return,
the colors won’t be so brilliant,
the Jhelum’s waters so clean,
so ultramarine. My love
so overexposed.

And my memory will be a little
out of focus, in it
a giant negative, black
and white, still undeveloped.