How JNU VC Lost His Own Institution's Trust

In a democratic society, a vote of confidence in parliament carries within it the same ethical value as does a referendum in a university.

After winning the recent vote of confidence on the floor of Lok Sabha, a triumphant Narendra Modi tweeted: “NDA has the support of more than 2/3 members of the Lok Sabha.” One wonders how the ruling party would respond to the total lack of confidence that teachers of Jawaharlal Nehru University (JNU) have expressed in Jagadesh Mamidala, the institution’s vice-chancellor.

The NDA has the support of more than 2/3rd members of the Lok Sabha.

Yesterday the nation saw yet again how the Congress is only interested in creating instability. Congress leaders did the same in 1999 and before that too! pic.twitter.com/5cIjoU9YPH

In a democratic society, a vote of confidence in parliament carries within it the same ethical value as does a referendum in a university. In both cases, members of these valued institutions have an opportunity to express their trust or absence of trust in the dispensations that govern them. Winning that trust vote is one way of reaffirming their legitimacy in continuing to hold the powerful positions they do.

Renewal of faith in the leadership governing an institution – be it a government or a university – is often considered to be an important aspect of democracy. After all, the people of India queue up every five years to renew or express a lack of faith in a political party. True, as political theorists and social scientists have often underlined, electoral democracy is not the sole or even the most important marker of a democratic society. In fact, such a conception amounts to limiting the idea of democracy itself. Nevertheless, elections do remain an important signifier of legitimacy for heads of states.

Braving the inclement weather, more than 300 faculty members showed up to vote. The JNU Teachers’ Association had reason to be pleased since the administration had created an atmosphere of fear. The referendum not only rejected Mamidala’s leadership, it also overwhelmingly – 96% – voted against taking a Rs 515 crore loan from the Higher Education Funding Agency (HEFA) to develop its engineering and management schools. The JNUTA has argued that such a loan would notch up students’ tuition fees and university debt. In other words, JNU teachers rejected both the VC and his policies.

It may be argued that just as Modi presides over the all-powerful central government, Mamidala too heads a reputed and powerful central university. Yes, the rules and protocols governing these spaces are indeed distinct from each other. For instance, had the Modi government lost the vote of confidence in Lok Sabha, it would have had no option other than to resign from office. Jagadesh Mamidala, on the other hand, is not bound by any such parliamentary protocol. His predicament is one of personal ethics and the values he holds himself by. After all, there is the matter of shame at losing the trust of virtually the entire JNU faculty. Tarring all the teachers voting against the vice-chancellor with the same political brush, tempting though it may be, would surely not pass muster in this case. Would Mamidala spare a thought about the teachers who have been thrown into one turmoil after another ever since he came to occupy the top university post?

The figure of 93% nays is surely not to be slighted. The reasons for such widespread rejection are not difficult to see. Since 2015, the JNU academic community has hardly had a respite from fiats handed down from the top. The once peaceful university, a coveted space for intellectual rigour, has turned into a mined warzone, with students and teachers having to watch every step they take. 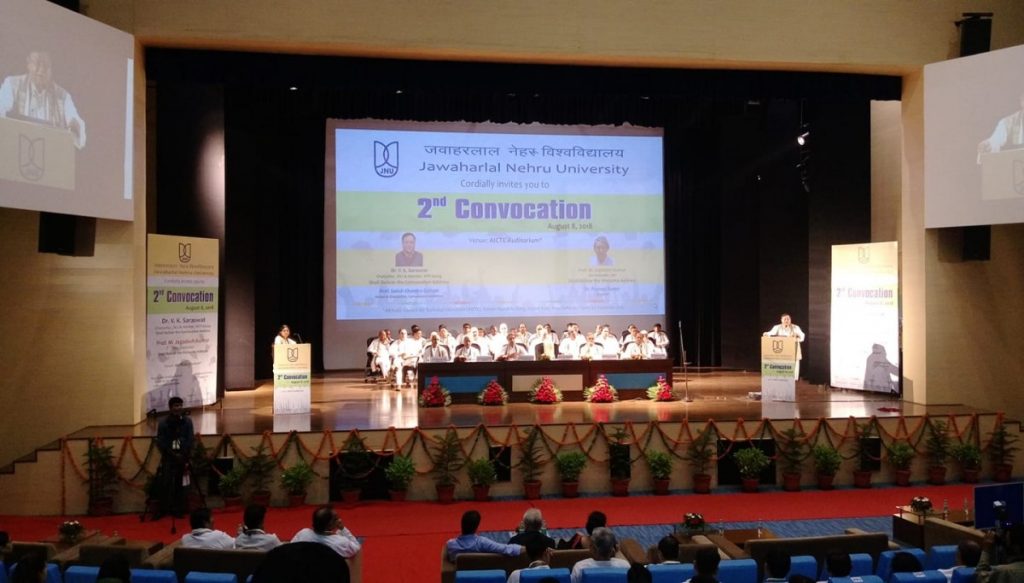 From denying students permission to submit their PhD theses, making 75% attendance compulsory for MPhil and PhD students, to now biometric attendance for teachers, the academic community in JNU has little reason to repose any trust in Mamidala’s leadership.

To many, universities are hallowed spaces. They are interactive spaces where students and teachers are expected to engage with each other, explore ideas, debate and dissent. It’s the head of the institute’s responsibility to create an atmosphere where teachers can teach and students can study without fear of harassment and persecution. Since his appointment as vice-chancellor, Mamidala, it appears, has been doing the very opposite.

In fact, the regimented convocation ceremony that JNU held earlier this week, is a manifestation of such strenuous and dogged efforts to turn university classrooms into barracks.

One is also reminded in this context of media reports two years ago, which carried information about the BJP-led Gujarat state government’s initiative to dictate topics for PhD students in state universities. Drawing up a mandatory list of 82 topics, the government asked each university to ensure that doctoral students select at least five topics from the official list. The topics predictably included themes like: Swachch Bharat Abhiyan, MA Yojana (a health insurance scheme for the poor), and Kanya Kelavani (promoting girls’ education), run by the Gujarat government.

Absurd though it may seem, the question needs to be asked. Are the government and the JNU VC planning to take JNU down a similar rutted path? For a vice-chancellor to be so adversarial to the academic community he is a part of and presides over – teachers and students alike – is a sign that some kind of social contract had broken down. What comes next, seems to be anyone’s guess.