As the police hit protestors with lathis and used water cannons to disperse the crowd, a woman journalist was also reportedly groped by an officer in the pandemonium. 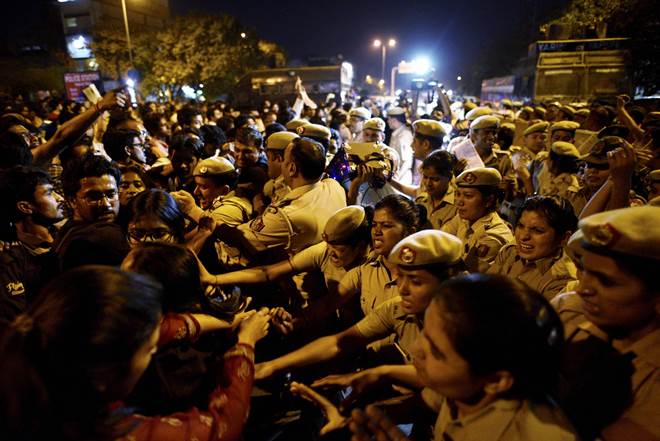 New Delhi: The black clouds above Jawaharlal Nehru University (JNU) are still swirling as the tussle with the administration on one side and students and the academic community on the other side continues unabated.

But on Friday, things took an ugly turn when the ‘long march’, taken out to protest the recent mandatory attendance rule, the removal of various deans and chairpersons and the sexual harassment charges against Prof Atul Johri, which saw over 1,000 students and teachers walking from the campus to Parliament Street was met with a police charge and water cannons near INA market.

Upon being stopped, there was reportedly a brief scuffle as the police reportedly began to manhandle several protestors as well as journalists.

“Professor Bikramaditya Choudhary, a few students and myself were talking to the officers at the barricade when they suddenly turned on the water cannon. Before I could understand what was happening, there was a lathicharge and students were getting hit,” JNU community medicine teacher Vikas Bajpai told the Telegraph.

JNU protesters detained by Delhi Police, water cannon used. They were marching from university campus to the Parliament. #Delhi pic.twitter.com/22CzbpXr0U

The Telegraph reported in detail how a journalist alleged that a police officer had groped her in the pandemonium.

“What happened next was recounted by a woman reporter from a national English newspaper, who was corroborated by the PTI reporter, C.P. Balasubramanyam.

Delhi Cantonment station house officer Vidyadhar Singh charged towards the journalists who were in the service lane of Brigadier Hoshiar Singh Marg after the police had stopped the march with water cannons.

The police were chasing back the marchers with lathis. The service lane had a few onlookers.

“He (Singh) pushed us both away. We said we were journalists and moved away and stood in the corner. There was no one else there. Two minutes later, he came towards me, staring at my chest. He pressed my right breast and pushed me back,” the newspaper journalist later told DCP (New Delhi) Madhur Verma, the public relations officer of Delhi police, an exchange that was witnessed by this reporter.

“Were you wearing an ID? It’s hard to believe that nobody else was there. Are you sure?” Verma replied.

After reporters pleaded with every IPS officer at the spot, including Special CP (southern range) Praveer Ranjan, joint CP (New Delhi range) Ajay Chaudhary, at least six DCPs and several others, for half an hour to register a complaint, inspector Singh was made to apologise by DCP (Diplomatic Security Force) Kumar Gyanesh.

“It was in the heat of the moment. He was not targeting you,” Gyanesh said.

The woman reporter told him: “When we confronted him after he groped me and asked him how a police officer could behave like this, he said I was lying. Other officers said, ‘Galti ho gaya hoga (maybe there was a mistake)’. But he said, ‘You are lying’. He is not sorry.”

That wasn’t the only horror story to emerge. Praveen Singh, a journalist for Firstpost, was reportedly thrashed by the police, forcing him to protect his arm in a make-shift sling during his attempts to escape the confusion of a peaceful protest gone wrong.

“Hindustan Times photographer Anushree Fadnavis alleged an officer snatched her camera while she was trying to click a student being kicked. She had not got it back till 9.30pm,” reported The Telegraph.

According to the Indian Express, roughly 20 students were detained at Defence Colony police station. They were eventually let go after a medical examination at the All India Institute of Medical Sciences (AIIMS).

JNU students’ union (JNUSU) vice-president Simone Zoya Khan said, “Students came for a historic long march, which was peaceful. Police have made it their agenda to shield a sexual harasser and beat up common students. They should be ashamed.”