"We are at a loss to understand why what appeared to be a well functioning body in JNU needed to be disbanded and could not seamlessly incorporate an Internal Complaints Committee." 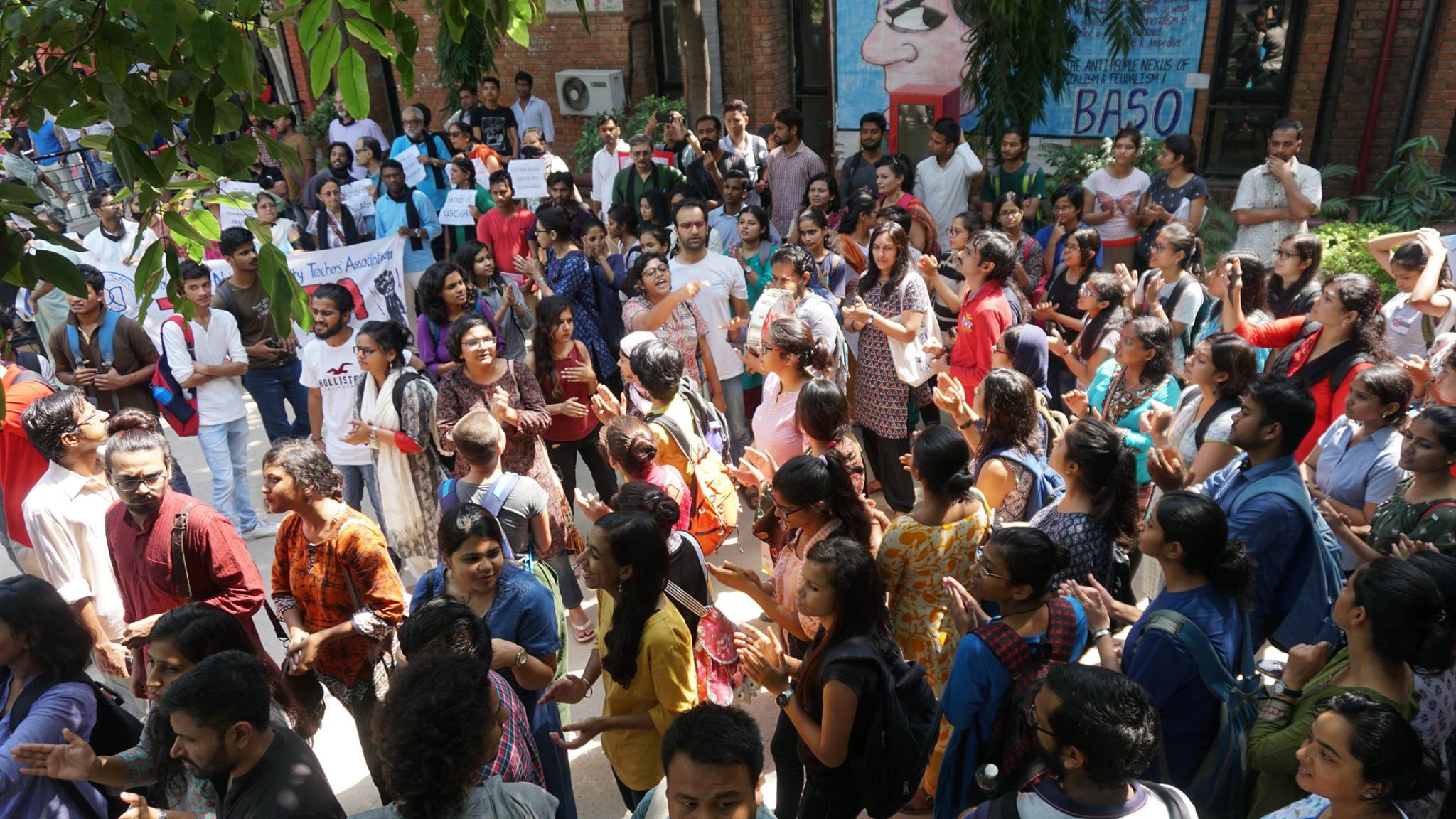 Students and teachers protesting against the dissolution of GSCASH in JNU. Credit: Facebook/Samim Asgor Ali

New Delhi: Members of the University Grants Commission (UGC)-appointed SAKSHAM task force, which as asked to look into gender sensitisation and anti-sexual harassment bodies in universities, has written an open letter questioning the Jawaharlal Nehru University (JNU) administration’s decision to do away with the elected Gender Sensitisation Committee Against Sexual Harassment (GSCASH) and replace it with an almost entirely nominated Internal Complaints Committee. According to their statement, GSCASH was used as a model by the committee because of its record on gender sensitisation and efforts to deliver justice in sexual harassment cases.

Both the students’ and teachers’ associations at JNU have protested against the university’s decision, saying the administration is trying to dilute the strong watchdog body and endangering justice. A group of students and teachers from the university have approached the Delhi high court, asking that the administration’s decision be quashed. Women’s rights organisations had also written to the vice chancellor, asking that the GSCASH be allowed to function independently.

We the undersigned would like to share our concerns regarding the dissolving of the GSCASH of JNU in light of the decision to set up an ICC in compliance with the UGC Regulation of 2015 and the Gazette Notification that followed.

We would like to draw attention to the fact that the SAKSHAM Report authored by us via a mandate of the University Grants Commission in 2013 had provided the broad perspective and framework for the UGC’s initiatives and Regulations to ensure gender sensitization on campuses of HEIs, to combat instances of Sexual Harassment after the Delhi gang rape of December 2012 and the subsequent enactment of the Sexual Harassment at Workplace Act 2013.

We write primarily because the models for Gender Sensitization and anti Sexual Harassment Committees recommended by us in the SAKSHAM report (based on nation wide questionnaires and visits to several campuses) were drawn from the structures and processes operational at JNU (the GSCASH) and the University of Delhi. We are consequently at a loss to understand why what appeared to be a well functioning body in JNU needed to be disbanded and could not seamlessly incorporate an ICC. Had we missed some important aspect that we need to know about?

The SAKSHAM Task Force was set up since the UGC was “committed to a policy of zero tolerance regarding harassment of any kind. Accordingly, a Task Force was constituted to review the present arrangements, identify loopholes and inadequacies and to formulate remedial measures to address the concerns of all girls and women, and of the youth who study and live in the country’s numerous and diverse university campuses” (Chairman, UGC, 07.11.2013).

The Task Force had the following Terms of Reference:

(i) To analyse and assess the extent to which the existing arrangements for safety of women, both students and employees in particular, and youth in general, are adequate on the campuses of the institutions;

(ii) To identify shortcomings in the existing system and to suggest measures to put in place strong safeguards.

(iii) To evaluate grievance Redressal mechanism for gender specific concerns and to suggest measures to strengthen them;

(iv) To suggest academic measures and action programmes to bring about changes in practices and attitudes within society towards recognizing the fundamental right to gender equality;

(v) To suggest how gender education and sensitization can be made an integral part of the university curriculum in all subject domains;

(vi) To suggest how awareness of gender sensitive issues be made an essential eligibility criterion in the future recruitment of university staff – both teaching as well as non-teaching.

The SAKSHAM Report was accepted as guidelines by the UGC in 2013. During 2014 and 2015 a series of letters were sent to universities under the jurisdiction of the UGC asking all universities and affiliated colleges to implement the recommendations of the SAKSHAM Report “in toto so as to enable the UGC to compile and furnish the action taken to the MHRD, Government of India.” All colleges were requested to send compliance reports at the earliest.

The SAKSHAM Report authored by us made it clear that its intention was to offer some recommendations for HEIs to set up adequate mechanisms for protection from and prevention of sexual harassment and other forms of violence against women. These guidelines were in no way intended to restrict HEIs from evolving models that improve on these standards and are tailored to address the specificities of various campuses. In fact the GSCASH Rules and Procedures in JNU laid down important benchmarks in the view of the SAKSHAM Committee.

The Report had specifically advised that ICC members must be representative and that “such representation must not be directly nominated by the employer; rather, transparency and a principled basis for membership on the ICC should be arrived at after involving all sections of the HEI community.” (p 75-76). We reproduce this section from our Report in full:

“A core guiding principle is that individual institutions should be empowered to choose whichever method of composition of ICCs that is deemed appropriate by the work place community (students, employees and the person(s) in charge of the HEIs), as long as the composition of the ICC complies with the Act of 2013, and is given the force of Rules, Regulations, Statutes and/or Ordinances of the institution concerned….While it could be the case that the mode of direct election is not feasible across all HEIs, it is nevertheless important that the composition of ICCs does not replicate the power inherent in workplace hierarchies. ICCs must contain representation from all sections, particularly junior levels, of the workplace. Furthermore, such representation must not be directly nominated by the employer; rather, transparency and a principled basis for membership on the ICC should be arrived at after involving all sections of the HEI community.”

Our Report drew on our meetings with Open Forums across campuses in the country. During these interactions, we found that the models offered by DU and JNU, in order to formulate these broad guidelines, were widely appreciated and accepted by diverse bodies. In our study, we also found that in some campuses, ICCs already existed, but were not effective or functional in spirit, as reported in the many narratives of students and staff members who were either not able to voice their experiences of harassment or had been dissuaded from reporting in writing. That is why, in our report we noted that “The experience of two long standing Committees and their Guidelines in the University of Delhi and the Jawaharlal Nehru University were particularly valuable,” (p 22). We had in fact included the Guidelines of the Committees of these two Universities as Appendix 11 and 12 in our Report, as a resource from which many other HEIs had expressed a keen eagerness to learn and draw inspiration from. This was a measure of the appreciation and acceptance of the Rules and Procedures formulated by these two Committees, reflecting deep application of mind and experience to ensure adequate safeguards to reflect the concerns for confidentiality and freedom from bias and “pressure from senior levels.” We cited the JNU GSCASH rules (at p147); acknowledged the ten-member Report chaired by Sudha Pai (at page xi), cited the legal literacy workshops held in JNU (at p 229) as a model for the rest of the country.

The SAKSHAM team was given the task by the UGC to aid in the larger transformation of college and university spaces by bringing attention to transgressions pertaining to the redressal of Sexual Harassment on campuses across the country. Given the larger mandate of JNU’s GSCASH, which has been a model for many universities in India, it would serve the larger purpose for the ICC, which is a redressal body, to coexist with it, and so remain in compliance with the UGC regulations 2015.