In JNU, the Slow Destruction of a Public Institution

Holding academic council meetings in the winter vacations and bypassing the voices of a majority of teachers is the latest instance of the university administration's attempt to erode institutional structures. 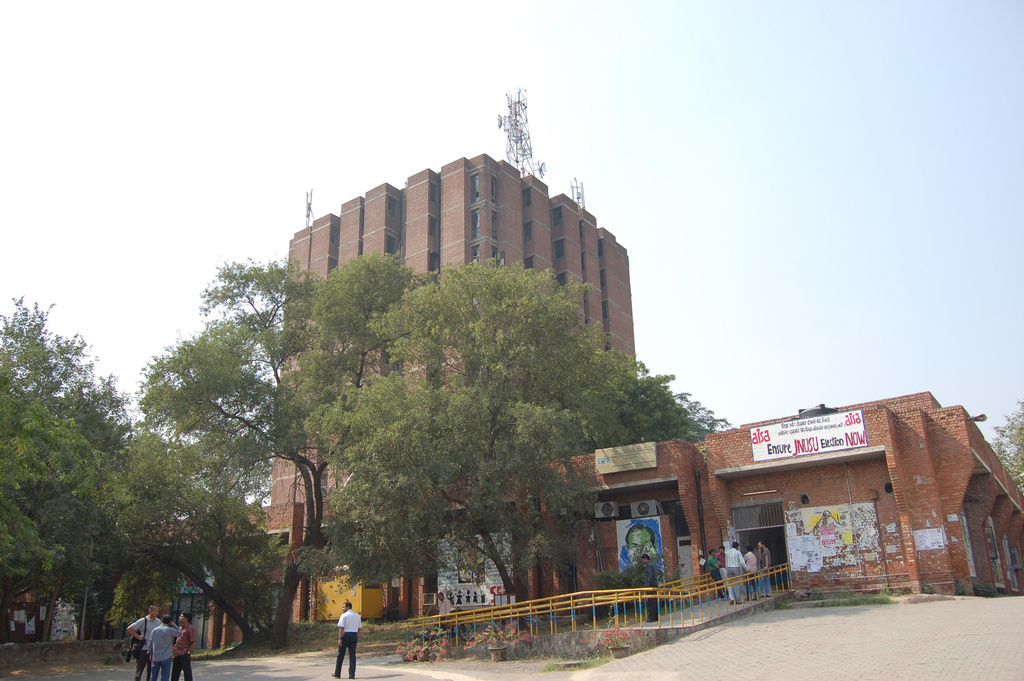 When universities acquire a reputation of the kind Jawaharlal Nehru University (JNU) has in its 45-year history, it is primarily because of its academic life, the integrity of its decision-making bodies and the vibrant nature of debate and dissent allowed on campus. What has kept it all together is a fierce commitment to follow the procedures and norms of the institution for most of its history. It is this spirit that has guided the functioning of all the academic and statutory bodies of the university.

Since February 2016, JNU has seen turbulent months with a government-inspired crackdown: arrests of students, media hysteria and an atmosphere of permanent crisis that has not abated. The new JNU administration under the freshly appointed vice chancellor Jagadesh Kumar has shown little interest in addressing student and teacher concerns. Remember, JNU is one of the rare public research universities where students from diverse socio-economic backgrounds can get a degree and contribute to public and intellectual life. Sadly, the current administration seems determined to reverse this scenario at all cost, using every occasion to erode existing institutional structures. Every semester seems worse than the previous, if this continues JNU will soon join all the other universities in India wrecked by despotic administrators.

The latest development in this difficult year was the scheduling of a controversial academic council meeting on December 23 by the vice chancellor, when most faculty members are away on Christmas vacation. The academic council is the university’s highest academic body that is responsible for maintaining the standards of education, instruction, admission procedures and examination norms along with several other issues concerning the functioning of the institution.

More than 20 academic council members sent a letter in writing to the vice chancellor requesting that the meeting be rescheduled to early January, to ensure the widest possible participation of the academic community. But this is precisely what the vice chancellor did not want. There was no reply to the request made by members. On Friday, December 23, the meeting was convened at 2:30 pm

Every academic council meeting starts with the approval of the minutes of the previous meeting that are prepared by the administration. These are circulated in advance and amendments can be submitted by members either in writing or raised during the meeting. We were going to discuss a section of the minutes which had several errors, the language had been manipulated and there were clear misrepresentations of the discussion held at the previous meeting of the council. After a prolonged debate the administration reluctantly agreed to accept the majority opinion of the house on some of the issues. The voices of the majority of teachers, even in this thinly attended academic council, could not be stifled. It is to the credit of the academic council that the members were persistent and demanded a vote, forcing the vice chancellor to accept the majority opinion. The heated and contentious meeting lasted for over eight hours and was finally adjourned with a decision to continue on Monday, December 26, to discuss the second part of the minutes and the remaining items of the agenda. We went home exhausted. 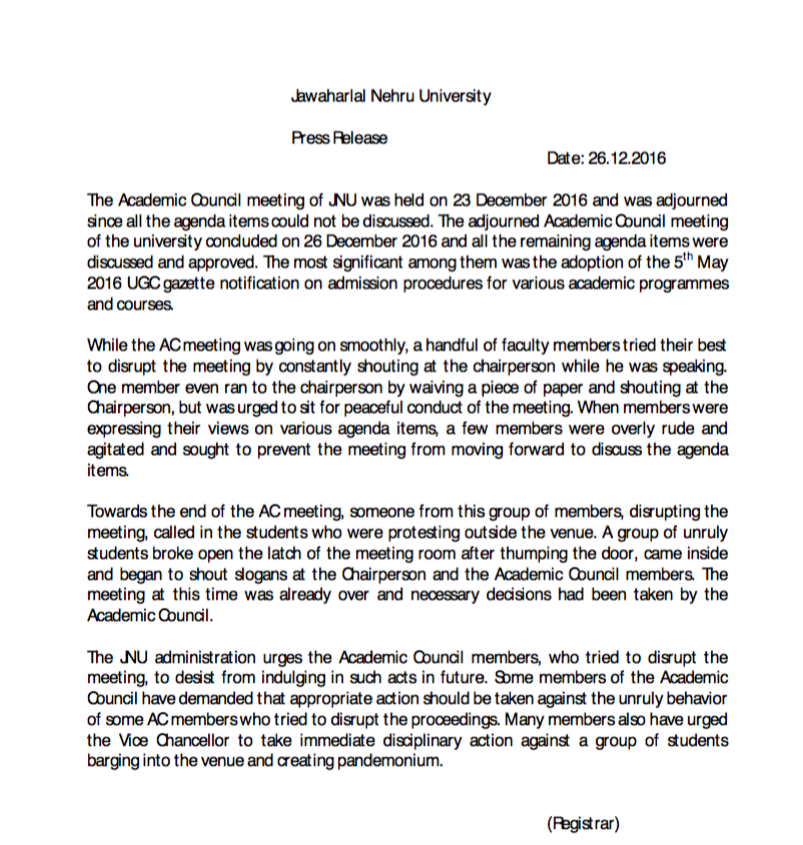 On December 26, we returned to an academic council that was even smaller than the Friday meeting. Remember this was the day after Christmas. A course on Yoga philosophy prepared by the Sanskrit centre, which had been tabled on the 23rd, was to be the first item for discussion on the 26th. This course had been returned by the previous academic council for some of its inherent biases and its scholarly limitations. We were supposed to discuss this new version as the first item on the 26th before moving to review the second part of the minutes. We had brought with us comments on the syllabus prepared by three eminent scholars of the university, two of whom are members of the academic council. We had been assured on Friday that this was going to be discussed on Monday. The vice chancellor, however, decided to move headlong into the confirmation of the minutes with the assumption that the Yoga philosophy course had already been passed. This is obvious from their press statement. Yet we had not even discussed the syllabus.

When the discussion on the minutes started, no debate or amendment was welcome. People with their hands raised were not allowed to speak and those who raised their voices in protest were told imperiously to behave. The vice chancellor was now much more confrontational than on Friday. As members demanded that their letters requesting amendments to the minutes be discussed, the registrar suddenly denied he had received any such letters! This was retracted only after the letters were prominently displayed and the amendments were read out by the concerned faculty members.

The two most controversial issues that dominated the academic council debates concerned the procedures involving the admission of students and the constitution of selection committee panels for new faculty appointments. The actual agenda item under discussion was linked to the university’s current practice being followed for the admission of students to the MPhil/PhD programmes. It was during this discussion that the issue concerning the University Grants Commission’s (UGC) gazette notification came up – a matter that still had to be discussed. Members of the council felt the implications of this could go against the constitutionally directed social justice practices that universities are supposed to follow. This issue was raised on Friday and had not been concluded. The council was going to have a discussion on this later. The vice chancellor himself had agreed to seek a clarification from the UGC on the matter. Yet the university statement states that the UGC gazette notification was passed by the academic council! This is a gross falsification of the proceedings.

The second issue concerned the process involved in the constitution of selection committees to appoint new faculty. A good selection committee requires subject experts who can fairly evaluate a candidate and judge her knowledge of the field and ability to teach. In JNU, an extended list of subject experts of possible selection committee members is drawn up by the different centres and schools of the university. This is because specialised knowledge of the field is required to select new faculty. This list is then sent to the academic council and the executive council for approval. It is only after this process of approval by the university’s statutory bodies that the list of subject experts can be considered a panel from which the vice chancellor can choose members for selection committees. These are based on UGC regulations. What the vice chancellor wanted in this academic council was to approve the draft of the minutes that was worded in a way that would give him discretionary power to make changes to the final list of experts with his own additions! If accepted, this will open the door for the politicisation and manipulation of the selection process. We have seen the results of this all over India. JNU has been protected from this trend primarily due to the norms and procedures followed for the constitution of selection committees. Any deviation from these statutory positions will have grave implications for the future of this university. As many members stood up to protest this particular section of the minutes, the vice chancellor read through all the remaining items of the agenda, declaring everything passed. No one could hear anything. This was clearly a blatant abuse of power.

Several members of the academic council then issued a press statement expressing their shock and dismay at the way the academic council meeting was conducted. The university administration issued their statement to the press declaring everything had been passed. This mafia-like approach to the functioning of academic council meetings is becoming a norm – manipulate minutes, hold a meeting during the vacation, issue a press brief stating everything was passed despite a few miscreants! It is amazing how since Kumar took over as vice chancellor earlier this year, the university ethos is being systematically and consistently targeted. If teachers don’t comply then they will be threatened and firmly dealt with. The press statement of the administration reads like a veiled threat warning the teachers of what could happen to them if they do not toe the line.

The new face of the JNU administration is now in an open war with teachers and students to destroy everything that the institution has been known for. The most recent suspension of students is part of this culture the administration has now put in place – the repeated threat of disciplinary action for everything, so no one can dare to question them. It is easy to wreck an institution but very difficult to restore it later. The warning signs are there for all to see. It is important, therefore, for the larger community of concerned citizens to raise their voice against this destruction of a major public institution.

Ranjani Mazumdar is a professor in the School of Arts and Aesthetics, JNU.