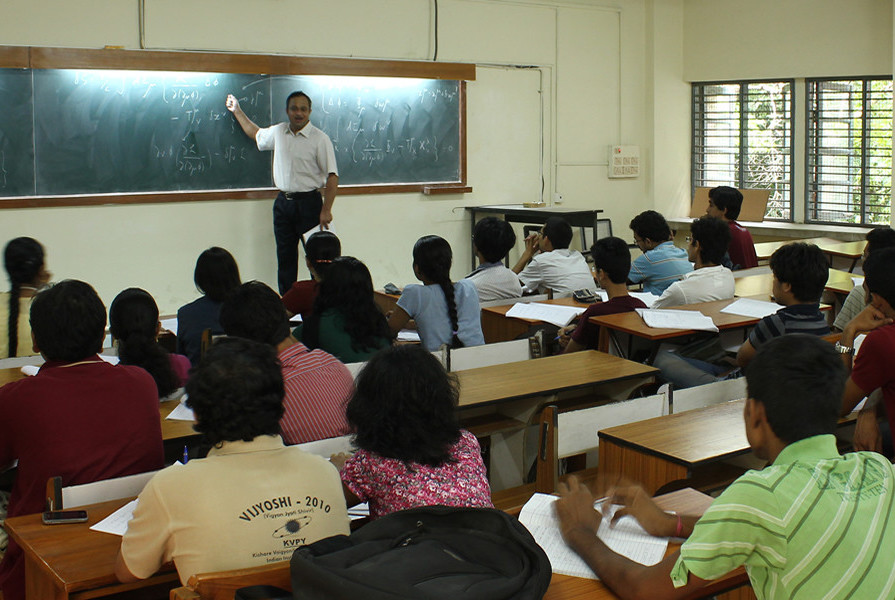 A class in session at the IIT Madras’s department of physics. Source: IIT Madras

This article is part of the ‘Let Teachers Teach’ series, discussing the Union human resource development ministry’s decision to not mandate college teachers to conduct research.

The Human Resource Development (HRD) Minister Prakash Javadekar has announced that the government will further revise the Academic Performance Indicators (API) so that it will no longer be mandatory for college teachers to do research and publish. This is a step in the right direction and will allow undergraduate-level teachers to focus on teaching. He told the Indian Express:

In 2010, the University Grants Commission (UGC), together with the All India Council of Technical Education (AICTE), introduced the academic performance indicators (API) for evaluating faculty at higher education institutions. The API required all faculty members at central universities and central-government funded colleges to do research and publish – in addition to teaching and administrative duties – in order to benefit from the Career Advancement Scheme (CAS). Most state universities and colleges also adopted the API.

As this author has argued before (here and here) the undergraduate faculty at colleges should be exempt from research because:

Given the above conditions, it was wrong for the UGC to expect and, even worse, demand research from college teachers. Indeed, because of the research component in the API, college teachers had turned to publishing in fake journals in order to claim promotions and other benefits. On its part, the UGC later tried to address the problem by preparing a list of ‘preferred’ journals, an initiative that resolved some problems but not others. There were also some minor changes made to the API last year but their benefits were limited.

Javadekar, the HRD Minister, recently announced that the government will be making changes to the API. After these changes are made, research will no longer be mandatory for college teachers to earn promotions. Instead, they will be assessed mainly on the basis of teaching and their engagement in “community work”. “We won’t burden [college teachers] with the responsibility of research, we’ll make it optional,” Javadekar said.

According to the minister, making research mandatory (for college teachers) was bringing down the quality of research, repeating an assertion that has been made earlier by some critics of the research component of the API. Of course, the research component in the API will remain mandatory for university-level teachers, i.e. those teaching at the postgraduate level.

The most common criticism against excluding the research component from API is that research is believed to feed into teaching and make for better teachers. If the faculty is no longer required to do research, the argument goes, they will be lesser teachers. However, according to a widely-cited study:

It is important not to perpetuate the myth that there is a positive and reciprocal relation between teaching and research. There is no doubt that many would like such a positive relation to be true, and there is a strong conviction that research and teaching are closely linked….Furthermore, a near-zero correlation between teaching and research is consistent with the observation that some academics are gifted teachers and researchers, but that others are substantially better at one than the other, and some are weak as both teachers and researchers.

The ‘research is good for teaching’ argument does not apply to most of India’s colleges for reasons noted earlier. Among other things, colleges are severely lacking in two Ls: libraries and laboratories, and it is naïve to expect research from poorly-trained faculty at such institutions. Sure, some motivated faculty may be able to learn to do research, but their numbers are likely to be small. Under the new API, such faculty may still pursue research if they choose to.

The ‘research is good for teaching’ argument also does not discriminate between doing research and keeping abreast of new research. Even those teachers who are not trained for research or are not inclined to, so far as they keep up to date with new research, they will be able to bring it into their teaching to the benefit of their students. It is not necessary, in terms of content, to be doing research in order to be or become a better teacher.

There is a danger that ‘community work’ – however it comes to be defined and measured – will be abused as easily as the research component was. Recall that a large number of faculty at India’s colleges and universities used the route of plagiarism and publishing in fake journals to prosper in their careers. The government should be prepared that the ‘community work’ component may be abused by faculty as well.

Finally, given the larger disposition of the current government, there is a possibility and the danger that it may abuse ‘community work’ to showcase or promote the ideologies of the ruling party and its allies. If that happens, it will undo the excellent call made by Javadekar to get rid of the research component in the API for college teachers.

After its introduction in 2010, the API was briefly scrapped by the UGC in 2013 but reintroduced a few months later. The government, the current one as well as those in the past, has been known to reverse its decisions. This must not happen again, not with the API and not with doing away with the research component in the API for college teachers. As Javadekar noted, “college teachers’ main duty should be to teach well.” To be able to do that, they should not be asked nor expected to do research and publish.