In the absence of transport, students have been walking to their exam centres. Most of them are unprepared to write tests, with schools having been closed through the siege. 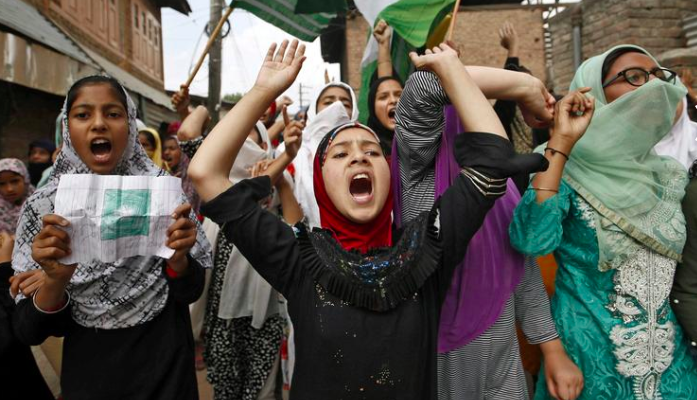 A group of students scattered near the Government Higher Secondary School, Bijbehara, wait for their third paper outside the gate. Wearing a white sweater and laughing with her two friends, Munaza Iqbal makes a face when asked how her papers are going. “Not how I expected them to go,” she says.

“We had completed only 45% of our syllabus, we didn’t know our examinations will be held suddenly,” she adds.

Iqbal, who is the only child of her parents, says her family were of the opinion that she should skip her papers as they were frightened about the situation.

On October 29, the Class 10 board examination started in Jammu and Kashmir. This move was aimed at bringing children back to school. The valley was in the middle of a civil shutdown against the government, after it scrapped Article 370 and bifurcated the state into two Union Territories.

“When clashes broke out near our school on the first day of exams, my family was very disturbed. They told me to skip exams and sit at home as they felt it was unsafe,” says Iqbal, who has developed a strong anxiety since her examinations started but has felt it imperative to keep this fact from her parents.

Also read: If Govt Depts Want Internet, Heads Have to Take Responsibility for Any Misuse

“Every day when I arrive for the exams I see personnel from the Army and CRPF. This worries me even more. If any attack happens our lives will not be safe,” she says.

Another student, Musaib Hussain from the Tral area of south Kashmir, was sitting on other side of the road during the above discussion with Iqbal. Curious, he approaches cautiously. Hussain, it turns out, walks 12 kilometres to reach school and write his exams.

“There is no transport working on the roads. It is very difficult to reach the examination centre,” he says.

Hussain says that he and his friends have no idea whether they will pass the examination. “It is just a formality that the government wants to get over with. It’s not like the government is at all concerned with our future,” he says. 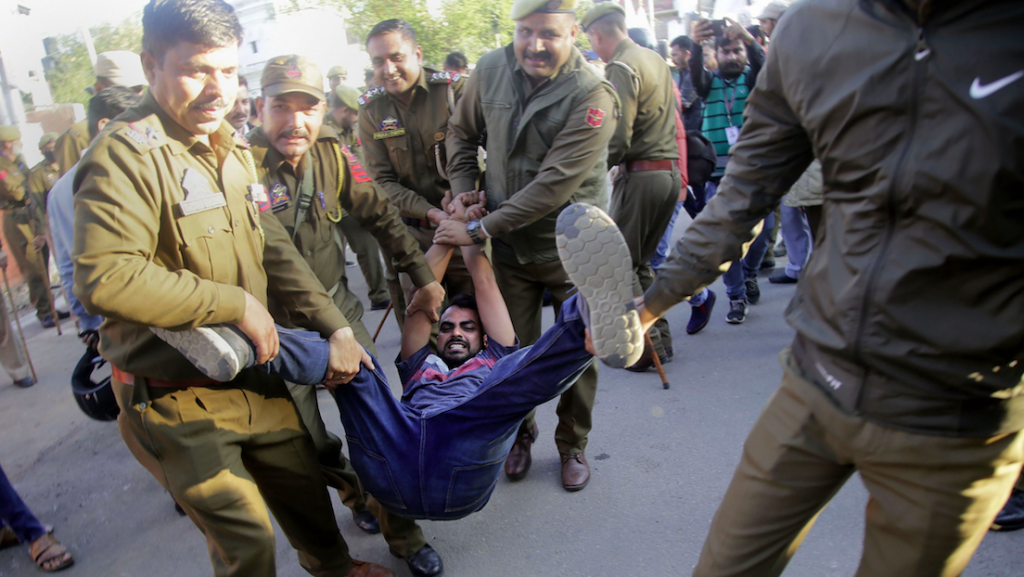 Jammu & Kashmir police personnel detains an ABVP student during their protest against Jammu University administration for completion of their various demands, outside Governor House in Jammu, Sunday. Photo: PTI

Since August 5, hundreds of children have been under illegal detention by the J&K police’s own admission. For those booked, there has been no time to prepare for the exams. One such person is a 16-year-old from Srigufwara, Anantnag, 60 kms from Srinagar.

Released a week before exams

Shahid (name changed) Ganie, enters the room with a smiling face. Only a week before he meets me, his Public Safety Act charges were quashed, and he was released after having been kept two months in a jail in Bareilly, Uttar Pradesh.

On August 4, police in Anantnag arrested Shahid along with three others in his locality. When his family went to the police station they were told that he was innocent and the will be released “the next day”.

But on August 5, when there was already a curfew in the valley, Shahid was shifted to Central Jail at Srinagar.

It was also the day when all communication lines were closed and the internet was shut down. Shahid’s family had no idea that their son was shifted to Srinagar jail.

When on August 8, the family visited Srinagar, they came to know that he was booked under the PSA.

Shahid’s dossier shows him registered as a 22-year-old when according to his school certificates, his was just 16.

Also read: J&K Police Denied Media Reports of Illegal Arrests of Minors. Its Own List Is Proof to Contrary

As per his PSA dossier, “after you [Shahid] completed your 12th class examination, you started having affiliation with Jaish-e-Muhammad,” but the irony in his case was that he hadn’t even sat for his Class 12 board examination.

On September 20, the Supreme Court of India directed the Juvenile Justice Committee of Jammu and Kashmir high court to examine allegations that children have illegally been detained. The high court looked at four minor detention cases from Kashmir, of which Shahid’s was one.

By then he had already spent two month in the Uttar Pradesh jail.

“I was thinking that I will now have to miss my exams,” he says.

Until a policeman showed him a warrant much later, Shahid says he had no idea that he has been booked under the PSA.

After August 5, as per reports, more than 6,000 arrests took place in the Valley in which more than 400 people were shifted under PSA.

On October 29, Shahid reached home after he was finally released from jail. During his term in jail, his family had submitted his examination form, and brought him books to study. A teacher faints during a protest against the administration in Jammu. Photo: PTI

But in the past week, Shahid says, he has not studied at all, as the excitement of his release from jail hasn’t gone down yet. “Yet I feel like I am confined to one place, which seems like a jail again,” he says.

His first paper was on November 9, merely 11 days after he was released from jail.

His 45-year-old mother Shakeela is worried that this episode might adversely affect his academic prospects.

Where is my coaching centre?

After having been confined to their homes for the last four months, the fears of students who are preparing for the medical entrance test has only increased.

Children from across the valley take admission into various coaching centres at Srinagar city ahead of the entrance tests.

However, this year, students had to skip important lectures as they had no other option but stay aback.

Coaching centres in the hub of Parraypora have had to shift from Srinagar to Mohalli, in Chandigarh on October 16, making it imperative for almost 400 students to move.

As per official data, there are 60,000 students enrolled in coaching centres in the valley.

He said that all coaching centres cannot afford the additional charges of setting up shop outside the state. Most of them have been deserted these past three months.

Zahoor Ahmad, administrator at Nature Coaching Centre, has been busy giving video lectures to students. “We have numerous safety concerns, including the safety of our girl students. We are responsible if something happens to them and cannot risk their safety,” he says.