If broad and deep reforms are not carried out alongside creating institutions of eminence, the government's proposal stands the risk of reinforcing existing structural inequalities in the education system. 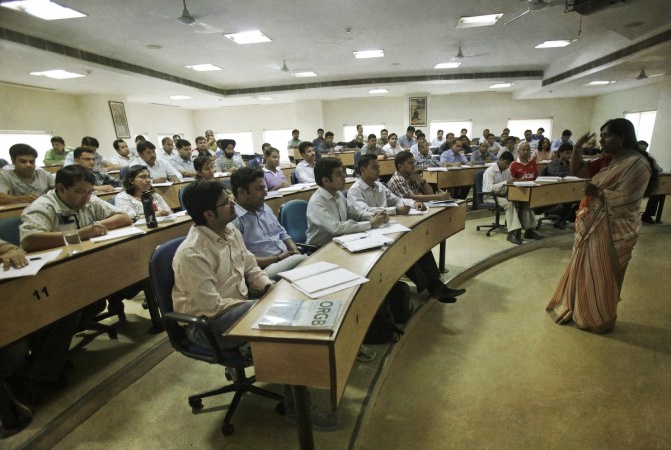 MBA students attend a lecture at the Management Development Institute in Gurgaon on May 2, 2012. Credit: Reuters

As part of a broader set of policy reforms being implemented by India’s Ministry of Human Resource Development, last week, the University Grants Commission (UGC) announced the opening of applications to the proposal of establishing Institutions of Eminence (IoE). The proposal has been the highlight of debates on higher education in the country since finance minister Arun Jaitley announced it in his budget speech in parliament in February 2016.

The aspiration to create high-quality higher education institutions (HEIs) by itself is encouraging. However, the proposal raises many concerns about the skewed impact of the emphasis on global rankings on equitable socio-economic development in the country.

Under the proposal, ten universities each in the public and private sector will be identified and supported by the government with the expectation that provided a more relaxed regulatory framework and greater autonomy, these institutions will potentially feature in the top 500 in at least one leading global university rankings within ten years. The 20 institutions will be expected to benchmark their key institutional indicators to those of leading global HEIs.

The mandates for selected institutions will include: a transparent need-blind admissions policy with adequate provisions for scholarships and loans, with institutions allowed to determine fees for domestic and international students; academic autonomy to determine types of programmes that are offered, curriculum and online courses; expanding internationalisation through recruitment of international faculty and students and institutional collaborations; promotion of high-quality research and teaching; and financial and administrative autonomy.

These guidelines address some serious challenges in the Indian higher education sector.

The question of access, particularly in private HEIs, for meritorious students with financial need; the need for diversity within the university community; a systemic emphasis on high-quality research and teaching; institutional autonomy in key academic and administrative areas of functioning; accountable governance systems particularly in private HEIs; and, high quality infrastructure that enables high quality outcomes.

The proposal comes in the backdrop of the release of leading annual global university rankings such as the Times Higher Education (THE) and QS. In the THE rankings, the number of Indian institutions in the top 1,000 fell by one to 30 this year and the highest ranking Indian Institute of Science dropped from the 201-250 band last year to 251-300 (on account of a decline in research influence score and research income). This year’s QS world rankings place two IITs around the 200 mark. This leaves no Indian institution in the top 200 globally.

What would the elevation of 20 institutions mean for the reputation, credibility and resource accessibility for the sea of non-IoE HEIs?

India currently has approximately 800 universities, 39,000 colleges and 12,000 standalone institutions and over 34 million young Indians join higher education annually. Given the sheer size and scale of the Indian higher education system, the direct benefits that may accrue from implementing this proposal are likely to be minimal.

Also read: In India’s Higher Education, Surfeit of Regulation and Deficit of Governance

The proposal also raises other questions of undesirable collateral effects.

Is there a mechanism through which the UGC will ensure that there is an equitable geographical distribution of the selected 20 institutions across the span of the country? This should be an essential selection criteria because a thriving educational institution, particularly in non-urban settings, most often results in resource investments for the development of surrounding neighbourhoods and communities. It also provides opportunities for community engagement initiatives that allow for greater academic occupation on issues of local and regional concern.

Several indicators for eligibility, selection and success of the IoEs in the government’s proposal are tied to global rankings exercises – the leading among these have been designed and implemented in the developed West. The rankings have, to a large extent, come to define the institution building agenda for HEIs across the world. What are the consequences, particularly for developing and lower-middle income countries like India, of this increasing competition to gain membership to a small group of elite institutions? While the investment of substantial state resources into a handful of institutes with ‘world-class’ potential is represented as a given good and being in the wider public interest, do we have demonstrable evidence that the assumed benefits of having globally ranked institutions will percolate into the larger higher education system in a country like India?

The prominence of global rankings in the government’s proposal also raises the question of what type of approaches will need to be adopted to produce research, adapt teaching pedagogies and recruit faculty that will enable an Indian HEI to break into the top 500 or 100. For instance, the IoE proposal requires that faculty members in the selected institutions produce research in publications “made by top 100 global universities” and “Any paper published in international publications which are included in SCOPUS, Web Science or similar international agencies can be counted”. This, in effect, mandates that researchers in IoEs conform to global research frameworks that by its very design benefit and cater to a privileged few. The large majority of leading international publications are in the English language. What does this mean for a country in which only 17% of students attend English-medium schools? (In Bihar that occupies the lowest end of that indicator, approximately 3% of students receive English language instruction.) What might this mean for local knowledge systems that are crucial to long-term sustainability, national development and creating more equitable social orders?

These publications are also published by top ranked Western institutions. Few journals published in emerging and developing economies are included in international indices. How do these affect preferences for the types of issues and subjects that are considered most relevant and publication-worthy? Research topics and methodologies will naturally have to appeal to editors and reviewers in a sphere that is dominated by the Western academy. How do we reconcile this with the government’s aim “to achieve social impact by engaging in applied research and innovation in issues of concern to developing societies”? Past and current debates around ethnocentrism, privileging of the English language and distorted narratives of local realities as a result of these, should be taken into account in the implementation of this policy.

The global rankings frameworks also rely heavily on measurable performance indicators such as research income, citations and industry income. How are these contextualised to non-developed countries? For instance, research income is a key indicator in the rankings methodology. How will the competition for limited research funding and grants be affected by the setting up of IoEs in India? Preferential diversion of funds to IoEs may be a natural consequence. Further, performance on such indicators rely on well-developed national educational and academic funding systems that enable research and academic excellence. The government’s IoE proposal does not discuss how a larger national ecosystem will be created that will be inevitable to success on such ranking indicators.

Watch: “Is Higher Education in India Only for Those Who Know English?”

Essentially, the test of such a policy will be its long-term impact on human development indicators, in which India has performed poorly on a global level. The 2017 Global Human Capital Report that was published by the World Economic Forum recently presents a useful context. In a country-wise evaluation of key indicators of human capital development (human capital is seen as a significant indicator of the long-term success of a country), India ranks only above Pakistan and Bangladesh among the five South Asian countries. India is also the lowest performing country within the G20 grouping. Youth literacy rates lag well behind that of other leading emerging markets, and is below the average for the lower-middle income grouping in which India is placed. However, India fares positively in “education quality, staff training and economic complexity – suggesting that a primary avenue for realising a greater share of the nation’s human capital potential consists in creating a virtuous cycle by increasing inclusivity and expanding access to its numerous learning and employment opportunities.” Hence, although the proposal mandates need-blind admissions, socially impactful research and caps on international faculty and students, there needs to be a more explicit connection made to achieving equitable human development in the country as a result of such a policy.

In effect, the government’s proposal has important implications for issues of access, equity, sustainable national development, preserving and sustaining local knowledge systems and preventing the creation of new imparities. Broad and deep reforms in the education system in the country must also accompany the IoE proposal in order that structured inequalities are not reinforced. In addition, the absence of a wider national debate on this proposal merits concern – considerations of who benefits, who may be marginalised and which types of inherent disparities may be advanced, deserve greater attention.