Why India’s Approach to Primary Education is Flawed

An NGO's annual reports on primary education have gained popularity in India and abroad, but its fundamental message on poor learning levels remains unheeded. 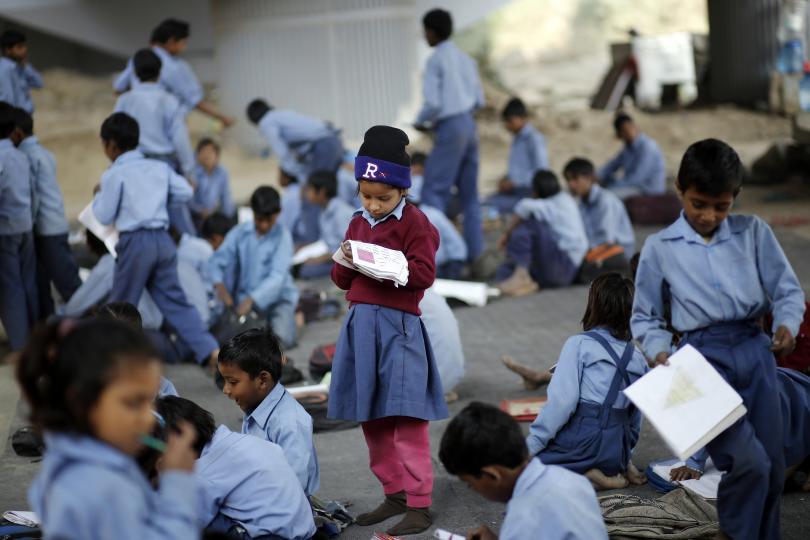 On the morning of July 15, 2016, Uttar Pradesh chief minister Akhilesh Yadav found himself inside a primary school classroom in the northern district of Shravasti. Since the second half of 2016, all major parties in the northern state have been sharpening their strategy for the assembly election, which is due next month. Yadav had gone to Shravasti to launch Hausla Poshan Yojana, a new scheme aimed at improving nutrition among pregnant women and malnourished children, and to discuss the development supposedly achieved during his tenure.

The ‘surprise visit’ to the school came about mainly because it was within the compound where the scheme was to be launched. Once he was in the classroom, Yadav was shocked to learn that only one girl in the class could read a chapter from her Hindi textbook. The rest could not read a word, a report stated. (None of the reports on Yadav’s Shravasti visit mentioned which grade these children belonged to, but since they were expected to read from a Hindi textbook, one could guess they were from the second or third grade.)

This incident captures much of what is wrong with India’s popular approach to primary education. The school Yadav visited was equipped with basic infrastructure; it had a concrete building, the students all wore uniforms and had books. Yadav blamed the teachers for the children’s inability to read from their textbooks, going so far as to say they were determined to ruin the entire upcoming generation.

He even gave the teachers a summary lesson in public finance, “Kuch toh sarkaar ki kripa karo, inki wajah se hi vetan mil raha hai, humari wajah se nahi.” (Have mercy on the government, you are getting your wages because of these students and not because of us.)

Why should the government pump money in primary education, he asked, if the children cannot read even a word.

Perhaps not knowing what else to do, Yadav suspended the basic education officer of the district.

But there is a positive side to this story. Yadav may not have known how to solve the problem, but he at least recognised it. Three decades ago, a UP chief minister might have been overjoyed merely by a classroom full of children.

At least part of the credit for this shift in popular perception goes to the ASER – annual status of education report ­– spearheaded by educational NGO Pratham since 2005.

ASER 2016, released last week, broadly mentions the same things the report did a decade ago, showing that learning levels remain depressingly low across the country. While 97% of children (aged 6-14 years) across rural India are enrolled in a school, only 13% of the children in grade two can read from their language textbooks.

Primary education in India is a subject on which confusion and panic continue to dominate the discussion. The early years of the 21st century had brought great optimism; liberalisation took the Indian economy to a growth rate of over 8%, much of it driven by the IT-led services, unlike other developing economies whose success was owed to a more smooth transition from agriculture to manufacturing.

However, there was unanimity about one thing, if India had to make use of its young, inexpensive workforce – the catch phrase was ‘demographic dividend’ – it had to improve the quality of education, beginning at the elementary level.

ASER was formally conceptualised in 2005, a year after the Congress-led UPA government came to power and introduced a 2% education cess. By then, more than 90% of children in rural India were already enrolled in schools, but there were few reliable estimates on the quality of education.

In late 2005, Pratham indulged in what could have turned out to be a logistical nightmare – a citizen-led national survey of children’s ability to read basic text and do basic arithmetic, with the help of partner organisations.

ASER marked a new experiment in the way the state interacted with the civil society in India, certainly in Delhi, but especially in tier II cities and small towns. “We are often cut off from the mainland, in terms of what’s happening in other parts of India,” said Medozeu Haralu, who became associated with Pratham in Nagaland in 2006 and has since seen ASER grow in the northeastern state.

“Initially nobody took ASER seriously. And it was also difficult to find partners and volunteers to go to the field; Nagaland has a difficult terrain, and in those days there were no cell phones.” But over the next few years, ASER became streamlined, at least some of which had to do with Pratham’s formal collaboration with many state governments. Now most people related to primary education in Nagaland – teachers, bureaucrats – know Pratham and ASER [and] even respect our work,” Haralu said.

A major reckoning for ASER came when its findings found a mention in the 2009-10 Economic Survey. By then, media and activists had also begun to use the data to flag the government policy on education. But with success also came criticism. ASER was charged with ‘blaming the children’ for their inability to learn. ASER, in turn, retorted that it only intends to ‘show the mirror’ to the citizens so they could demand quality education from the government.

“The government officials invoke the ASER report like a sacred text, even though they now have their own measures of assessing learning levels, like the [NCERT’s] national achievement survey data,” says N. Nataraj, who has been with Pratham-ASER team in Karnataka since 2005. “They prefer ASER maybe because it’s the only large sample survey done annually.”

But while ASER has become popular in India and abroad, with some countries in South Asia and East Africa using ASER-inspired assessment tests of their own, its fundamental message on poor learning levels has not sunk in yet.

Part of the problem with improving the children’s learning is that there is little consensus on how to go about it. This was also true of two otherwise eloquent panellists at the ASER 2016 release in Delhi on January 18, 2017, Delhi’s deputy chief minister Manish Sisodia and the chief economic advisor to the Modi government, Arvind Subramanian.

Subramanian believes that there has never been a bottom-up demand from the rural areas for quality education in a way that there has been for, say, improvement in roads and bridges; and it will remain so “unless it’s politically successful to focus on education.”

On the other hand, Sisodia, who also holds the education portfolio in the Delhi government, pointed out what he thinks is an innate supply-side problem – politicians and bureaucrats often have little vision for education, which ultimately “makes classrooms victims of syllabus and curriculum.”

Pratham has partnered with the Delhi government and one of its experts is a full-time advisor to Delhi’s directorate of education.

Sisodia comes closer to what researchers at Pratham and elsewhere have argued for long, that instead of judging children on the basis of age or grade, teachers should begin at where children are and target for doable goals. A confused pedagogy makes teachers focus only on the brightest children in the class, which in rural government schools can be a function of caste privilege or parents’ literacy, thereby ignoring the low learning levels of the majority of pupils in a class. This is how we have become what Amartya Sen calls “the country of first boys”.

Another persuasive argument on the demand-supply gap “between government thinking and parental demand” was made by Madhav Chavan, the co-founder of Pratham.

The recent ASERs have shown a shift in enrolment towards private schooling, and especially within private schools, a surge in English learning levels. Past research has shown that private schooling in itself doesn’t guarantee quality education. But a selective demand for English is not surprising. English has become a necessity (as a skill-set or for screening purposes) in the service sector jobs, the only shot at upward mobility for a majority of rural Indians.

This also makes the 2009 Right to Education Act, with its fixation on inputs, appear out of tune with the parental demand and with the rapid changes in communication technology unleashed by the internet.

Some of this reflects at the macro level. There is a growing paranoia now that India’s poorly trained labour force, along with a stagnant manufacturing sector, might be headed for a demographic disaster. Quality primary education will not resolve all that afflicts India’s society and economy, but it is a necessary step in the direction of providing equal opportunity to the citizen. After three decades, the government is about to come up with a new National Education Policy to provide “quality education, innovation and research, aiming to make India a knowledge superpower.” Let us hope the NEP delivers at least some of what it promises.

Abhishek Choudhary is a journalist-researcher in Delhi. He worked at the ASER Centre during 2010-11.