We Have Got Our Children to School, But Are We Teaching Them Well?

Lessons from teaching young adolescents in a basti.

A burning desire to learn English, the language of opportunity: students at an urban learning centre in the locality of Prem Nagar, in west Delhi. Credit: Pratham 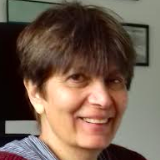 I’m in a basti in Nehru Nagar, which is by the railway tracks near Karol Bagh in Delhi. I’m on the second floor of a house, looking down on the street. There’s the usual hustle and bustle of people going about their business, shops with blue tarpaulin roofs and two-wheelers, bicycles and the odd car making their noisy way through narrow galis. The stench of garbage rises up and the air is fetid. In the hazy distance, I can see the flyover and hear the faint roar of passing trucks.

Behind me, a group of young, teenaged boys is sitting cross-legged on the floor, discussing poetry. One of them reads aloud the draft of a poem he’s written. His partner critiques it: Is mein dhun nahin hai (It does not rhyme). They are focused on their work, intent on writing poems that tell their stories.

It’s a few weeks into the English programme that Pratham Education Foundation hired me to teach. Pratham runs several after-school urban learning centres (ULCs) in bastis in Delhi. The primary goal of the ULCs is to support students in their schoolwork and to provide enrichment activities such as computer classes. There is high demand for English speaking and reading in the communities they serve, and Pratham is keen to shore up their students’ English skills. The students’ English reading and writing skills are several years below grade level. I was hired to teach English to the students from Classes 6 and 7 over the ten-week summer session some months ago. I was free to teach my own curriculum.

Over the years, I’ve taught little kids and teenagers in different settings. However, this was my first experience teaching young adolescents in a basti. I appreciated the complexities of teaching adolescents whose foundational skills weren’t strong. This programme presented an opportunity I was eager to take. 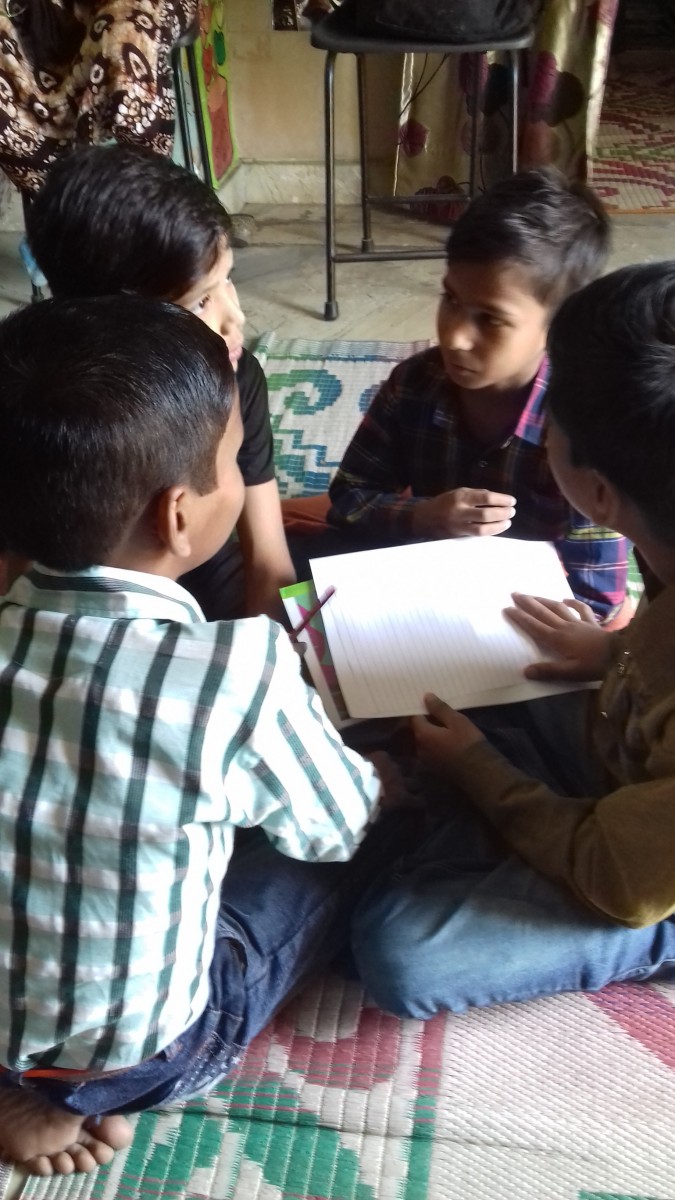 From rudimentary conversation to writing poems: students at an urban learning centre in the locality of Anand Parbat, in central Delhi. Credit: Pratham

There are 125 million Indians between the ages of 14 and 18, and India is one of the youngest countries in the world. A young population can contribute significantly to a country’s economy and progress, provided it’s well educated. At 97%, enrolment in schools in India is at an all-time high and many children are the first in their families to attend school. School achievement data is disappointing, however. It appears that our children are not learning well even though they are going to school and have aspirations for a better future. We’ve managed to get our children to school, but are we teaching them well?

My first order of business was to meet a few families and talk to the students.  I visited their modest, one-room homes in the basti.  The families used their space judiciously. The bed served as a place to sit and talk. There was a small stove in each room, a table for dishes and odds and ends, and surprisingly, bookshelves on the walls that were loaded with textbooks. In between the textbooks were notebooks. A few students pulled them off the shelf to proudly show us their drawings and writings.

We learned from the mothers that most families had moved from villages to the city in search of work, better schools and better opportunities. Their husbands had at least a few years of schooling, but none of the mothers had ever been to school. They believed in schools nonetheless. They wanted their daughters to learn as well and as much as their sons. They believed that education would open doors for their children whose lives would then be less of a struggle than theirs had been. But when pressed about the kinds of jobs they thought their children would want to do, or be eligible for, they were vague. Abhi toh time hai (there’s still time), they said.

However, the youngsters had ideas – at least for now. They said they hoped to become doctors and computer engineers. Girls and boys both aspired to careers they had heard about and which they thought would pay them well and, in some cases, be fulfilling too. Jobs like these would require several years of post-secondary education and solid English skills.

Also read: A School By the Forest Is Transforming Tribal Lives in Jharkhand’s Latehar

When asked why they wanted to learn English, the teenagers responded that while Hindi was their mother tongue – a language in which they made friends and watched movies – English was a language of opportunity. It would open doors to a much larger world. For these young people who aspired to careers that their mothers barely knew about, knowing English held the key to success – it was a necessary language to know.

The ULC, where the class met, was a nurturing, supportive place. The teachers were from the community and the children were treated with respect and love. It was a small but welcoming space, this brightly painted flat in a house in the community. 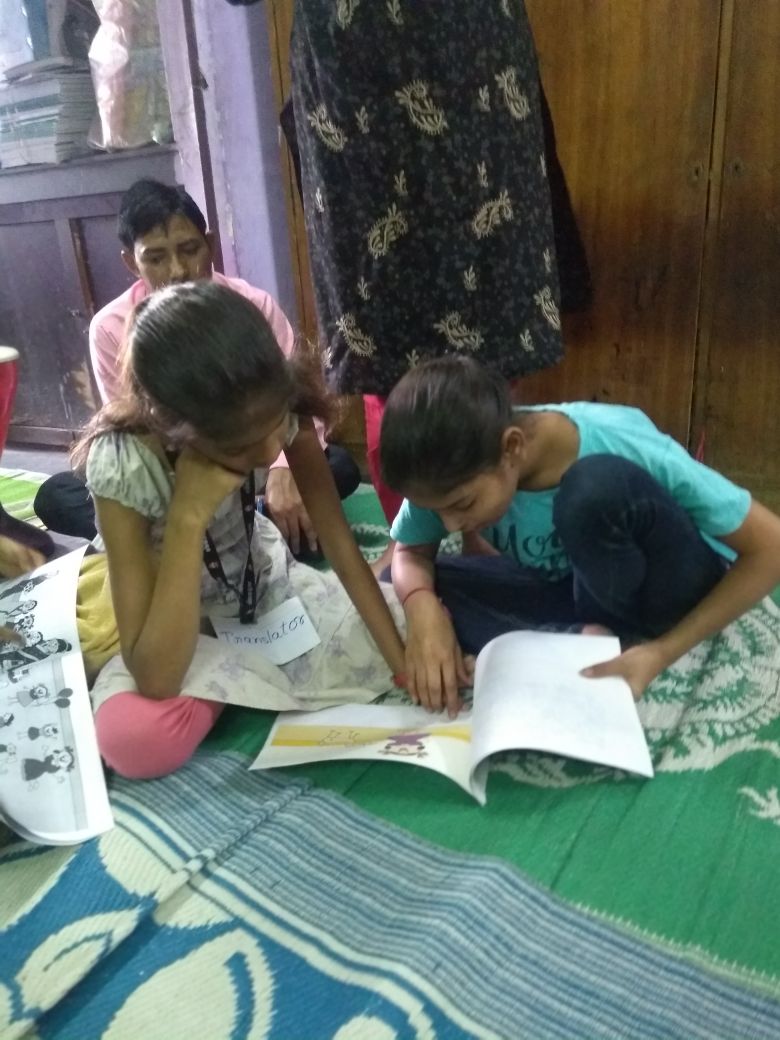 Dreaming of becoming doctors and engineers: students at an urban learning centre in the locality of Nehru Nagar, near Karol Bagh, in central Delhi. Credit: Pratham

My first days were spent getting to know the students. Their skills varied. Some could hold a rudimentary conversation in English and were able to read and comprehend a Class 2 textbook; others could answer and ask a few routine questions in addition to reading, and possibly comprehending, single sentences.

The curriculum evolved as we progressed. We discussed family structures and dynamics (they were candid about family dynamics and that led to some rich vocabulary lessons), emotions, and then, naturally, poetry. I wasn’t sure what to expect. Would they, like other teenagers I’ve known, be bored or feign boredom? How would the boys respond? But the staff was encouraging, and there we were, watching a YouTube video of Bollywood film star Hrithik Roshan reciting a poem he’d written for his son. The youngsters were mesmerised and they brought up the poem time and again in the remaining weeks.

For homework, the students were to bring in a poem – any poem that they liked – for a poetry reading in the next class. Their response was overwhelming. Almost every student brought in at least one poem. Some of them brought two or three. They were all eager to read their poems aloud. Some students had authored poems, others had brought poems written by siblings or a parent and some were published poems or even bhajans. One boy brought a Hindi translation of Carl Sandberg’s haiku, Fog. He’d read the poem in his brother’s textbook and liked the imagery.

We transitioned to writing poems. They were simple, formulaic portrait poems. The students worked on them diligently, writing about whom they loved (friends and family), what they liked to eat (chana-chawal and chaat), what they liked to do (play cricket, sing and dance) and, sometimes, what irritated them (the social studies exam paper!).

The students worked on their poems outside class and, when the time came for a performance for families, several students, many of whom had started the session quietly and invisibly, opted to read their poems. One at a time, a long line of students stood behind the microphone and confidently read their portrait poems, telling the world about themselves.

The poetry unit unlocked something deeper for the students, particularly those who were shy and quiet and hadn’t really stepped up until then. It had offered the students a brief time to study and appreciate a genre that they clearly valued. Was this a cultural value we had accidentally tapped into? (Think: Ghazals, dohas, bhajans, and even Bollywood songs). The unit had also given the students permission to write in phrases and single words, not worry about grammar, mix in Hindi words if they wanted to and play with language.  It allowed them the space to be creative in ways that they defined. It also gave them the opportunity to write about themselves – something they rarely did in English, if at all. It gave them ownership of their work.

When the summer session was over, the students said that they felt more confident in English. They understood more, were willing to take risks and speak more in English.

The English curriculum the students learn in school has been developed for children with strong, perhaps native, English skills and not students for whom English is a foreign language. In the textbooks, there are excerpts from writings by Jerome K. Jerome and John Galsworthy, among others. Aside from being way too challenging linguistically, the excerpts are not culturally relevant. There’s a story about an elf who helps with homework; there’s an activity that suggests students collect pictures of brooks and buttercups to create a collage. For students who live in bastis by railway tracks, surely this is absurd.

Early adolescence is a time of great growth – physical and intellectual. My students were true adolescents: they were capable of thinking creatively, had a large learning capacity, were able to apply logic and reasoning to their arguments (not always, admittedly, and sometimes with help) and had a great deal of interest in topics that were important to them.  They were ready, hopeful and eager to learn.

Sadly, the English curriculum that students are taught in school does not capitalise on who adolescents are, what skills they bring or how they learn. It does not consider the needs of students who come from families with limited experience of formal schooling. Instead, our students must study outdated content (which adolescent would pick Jerome K. Jerome to read?) from a curriculum that inadequately attempts to be interactive and engaging. Are we setting our students up for failure? And if they fail, will they send their children to school?

My students aspired to participate fully in today’s world, achieve academically and  work in professional careers. They understood the importance of knowing English – a global language – to attain these goals. They were energetic young people who, if given the right support, had tremendous potential to be successful. To fulfil our promise of the benefits of education to our students and to progress as a nation, we must urgently reconsider how we teach English. We need our students to succeed.

Meenakshi Khanna is an educator who has worked with under-served populations in India and the United States. Her experience includes teaching deaf children, mentoring and teaching young adolescents and curriculum writing.