How Different is Digitised Learning, Really? 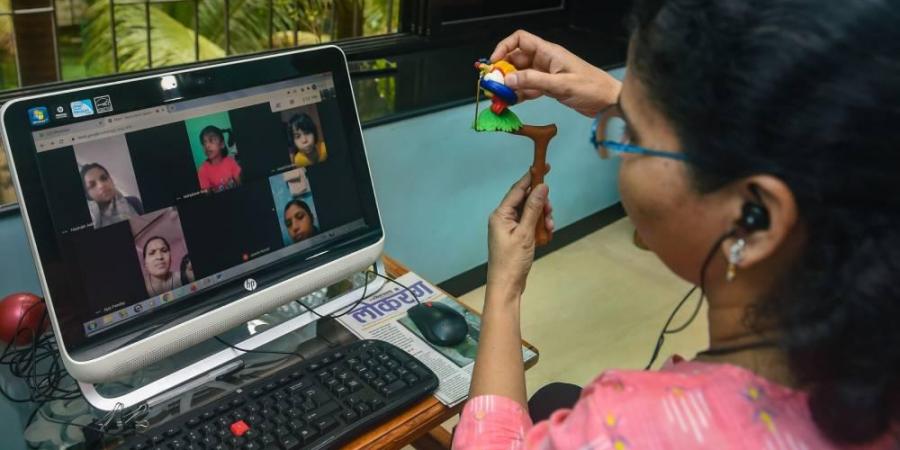 Neeta Dhuri, a teacher for hearing impaired students, takes an online speech therapy session of parents and students during the COVID-19 lockdown in Mumbai. Photo: PTI

For over a year, the battle for effective pedagogies online has raged, and opinion remains, as expected, divided on multiple aspects, from syllabus to assessment and the exacerbated digital inequality. Worries over the collapse of the traditional classroom, the absence of classroom debates, the watered-down syllabi and mass copying have been expressed across the world by educators, administrators and students.

A year before the pandemic forced education into online modes, Forbes carried a report on studies that showed the value of online education and degrees was in fact increasing among American consumers. This may not be a spectacular exemplar for the Global South, but it definitely maps a trend in parts of the world. The option of greater flexibility (for students) of courses in online education are seen by many universities as a great step forward, said another report in Time. India, despite the digital divide, transitioned well to the online mode, said an Oxford University Press study, but it also found that ‘a large majority of students have been impacted due to a lack of devices or connectivity at home’.

Such reports tell one side of the story, yes. Worries remain, voiced and unvoiced, for a country like ours, around this transition. Institutions and educators worry that reputations of institutions may erode. But the repute of degree and institutions are not lost because of a shift in the mode of learning-teaching mode, they are lost because of poor teaching, irrespective of the mode employed. And for this, there is no vaccine.

The material significance of the institution

An odd mixture of the material and the symbolic works in the shift to the online mode.

First, the symbolic valence of the “university” or “college” has not eroded: the value of degrees, or learning, from specific institutions remains unchanged. A fascinating study, published well before the pandemic forced us into emergency online/distance modes of teaching, in the journal Higher Education (2014), found that the “material campus continues to be symbolically and materially significant for a group of students who may never physically attend that campus”.

In other words, the online classroom experience, the hurried adaptation to cameras, chats and online assessment modes do not alter the material and symbolic significance of an institution, even when material inequities (of teaching, access to resources by students and teachers alike, which are raced, classed and gendered) haunt the entire teaching-learning process. Even distance-learning students, the above study shows, have a sense of the university as a special ‘space’ from and within which learning is possible.

Also read: How the Camera Has Changed the Dynamics of the Classroom

The crisis has mobilised those institutional players interested in retaining a measure of their symbolic and material value into action. When Oxford moved its teaching online in 2020 its Vice Chancellor, Louise Richardson, a political scientist by training, stated:

“In many ways universities, and especially this one, have come into their own during this crisis.  There is also a growing appreciation of the critical importance of our research. It turns out that people cannot get enough of experts, after all.”

But the shift to the online mode lends itself to the charge of a corporatization of education – which is a believable myth made possible because of the implicit link being forged between technologies, such as learning management systems, and corporatization. It does not help the debate that the key players in the field of digital technologies of education are corporate giants, whether in the form of Google Meet or Microsoft Teams, that trump state-owned tech. Even the ubiquitous PDF document, so material and so materially integral to online work, as Lisa Gitelman shows in her Paper Knowledge: Towards a Media History of Documents, was invented as a part of corporate authorship, thus emphasising the link between technology, capitalism and the document.

The material aspects of the institution’s online teaching processes are, unfortunately, determined mostly by such players. On the one side, the highly valued, at least symbolically, the institution itself, and on the other the corporatised techno-instrumental process that drives the online mode. Granted that tech is neither neutral nor a self-driven rampaging force, it still remains a matter of concern that a techno-capitalisation is at work more than ever in education, given the necessities of the pandemic.

How best to mitigate this concern must become a matter of state policy and determine the course set by public institutions of learning. It could help consolidate rather than erode the public institution to ensure equity especially in these circumstances. While admitting that the shift has been abrupt and has deprived teachers and learners of a measure of agency in adapting to the new modalities, perhaps it is time for us to ponder on how best the online mode, with all its tensions, can be profitably employed. Solutions are slow in coming, granted, for problems such as uneven connectivity, screen fatigue, in reorienting teaching modes, but perhaps we could think of this as an opportunity of reducing distances, of a different definition of ‘social space’, and of learning itself.

More recent commentaries have proposed a rethink of our assumption that the distance mode is a qualitatively ‘lesser’ mode. Flying in the face of several educators who see the face-to-face as the best operational mode of teaching-learning and the view that the embodied and the proximate are the sole determinants of appropriate socialising, learning and identity-making, studies show how, in online lives now, the virtual is an integral constituent of the material identity of a person. That is, to be online is not to be disembodied, and identity is a bundle of the virtual and the material.

Given this turn in re-evaluation of the digital (albeit with the same anxieties about surveillance and inequities as always), it becomes also necessary to wonder if the intensity, tensions and dynamics of the classroom have been diluted. They have been altered, substantially – of this there is no doubt. But have they been diluted?

With online lives, loves, debates and cybersociality having acclimatised those with access to the digital-social, the proximate-distant is not a binary. Cyberculture theorists have for the past several decades argued quite the opposite – that digital technology makes the distant proximate, in fact. Communities built in and through the digital, activism and welfare have all attested, since the late 1990s at least, to the proximating (to coin a word) function of the digital.

To play the devil’s advocate for a moment: in very large classes with over 150 students which is not unusual now in Indian institutions now, how ‘proximate’ is the teacher with each of the 150? Conversely, how distant are the 150 from each other when they sit in vast gallery-structured classes or auditoriums? If educators are to be believed, with such large numbers, it has become impossible to engage in one-to-one discussions, or even eye-contact (so central to the face-to-face mode) with many students, and there is a conspicuous decline in the nature of classroom interactions leading to a handful of the more vocal/less diffident cornering the speaking space. In such a context, is the online mode more ‘distancing’ than large classrooms with face-to-face teaching?

Or, to use another well-stablished example, the distance education model has been run, unevenly in its outcomes perhaps, for many years now, and catered to those who could not physically be on a campus. In this case, the impossibility of education resulting from distance was overcome through printed learning material in circulation, education-TV with phone-in facility, among others. Those too are technologies, albeit older ones. Today it is the age of the digital, where once it was paper, and the printing press was ‘an agent of change’, to borrow the title of Elizabeth Eisenstein’s field-defining history.

We could perhaps ask how, when for many of the (privileged) everyday life itself has been mediated, in most of its experiences, through digital technology, is the online mode a distancing medium?

The digital does not necessarily dematerialise the world, it rematerialises the world by merging the virtual with the material, and this is the same for the teaching-learning environment. If even file sharing can produce new forms of cultural citizenship, as digital culture studies has long argued, then what about the new spaces of the classroom? In an insightful study that demonstrates exactly this, José van Dijck proposed, quite rightly, that ‘collective memory’ or ‘cultural heritage’ today is increasingly data linked up by means of computer code through sites like Flickr. We can add the new portals and sites that have come in the ten years since Dijck’s essay and the argument would only be reinforced. Elsewhere, speaking of citizen activism, Joanna Wheeler argued in her ‘Seeing Like a Citizen: Participatory Video and Action Research for Citizen Action’ in the volume Digital AlterNatives with a Cause? Book 2: To Think, that the digital enables a social mobilisation.

Also read: When God Is on Your Curriculum, He’s Present Everywhere and Visible Nowhere

The casual conversations and banter that enliven the class may have not yet transferred to the online ecosystem, but it will come. For those living with Facebook and the social media, the repartee and the come-backs, the online classroom is an extension of their online cultural practice. The classroom-hour in the traditional mode was an event in the student’s and teacher’s day, but on social media, the quotidian is also an event. Perhaps the two can merge. The critic Laurent Berlant made a neat point about the nature of online discourse that could, at some point soon, materialise in our online classes as well:

“So and so likes this kind of thing right now, and went here and there. This is how they felt about it. It’s not in the idiom of the great encounter or the great passion, it’s the lightness and play of the poke.”

Stressed over the pandemic, its consequences and amplification of inequality, questions of surveillance and the worries over the teaching-learning process, the idiom of commentaries remains tied to nostalgia for a lost idyll of the face-to-face.

The lightness and play of the poke awaits us.