With resource persons drawn from various front organisations of the RSS, the 'training programme' has become a vehicle to indoctrinate teachers who had assembled from around the country. Participants at an orientation course. RSS ideologue Govindacharya can be seen in the front row. Credit: CPDHE

New Delhi: Under the rules of the University Grants Commission (UGC), all assistant professors in Central and state universities and affiliated colleges are required to attend one “orientation” course and two “refresher” courses in order to be eligible for promotion at different stages in their career.

Orientation courses are broad-based programmes meant to introduce teaching skills and interdisciplinary perspectives to faculty persons. The aim of the refresher courses is to upgrade the teacher’s knowledge of themes and issues in her field – history, sociology or women’s studies, for instance.

The usual practice has been for these centres to draw on locally available intellectual resources. In particular, orientation and refresher programmes offered by HRDCs in Delhi attract applicants from across India, primarily on account of their ability to source experts from top-tier institutions like the University of Delhi, Jawaharlal Nehru University, Jamia Millia Islamia, Indian Institute of Technology, and other such prestigious research establishments.

In recent times, certain UGC-HRD centres have been mired in controversies. An example is the case of the women and gender studies refresher course offered by the HRDC, JNU in December 2016. This course was arbitrarily removed from the purview of the university’s Centre for Women’s Studies and reassigned to its School of International Studies.

The fact that many of those selected to serve as instructors for these courses are increasingly being drawn from the Hindu Right and are using these platforms for ideological and political mobilisation has also generated criticism from teachers. Although many of the participants are often critical of the content of their orientation and refresher courses, they are unable to openly voice their concerns because they are held hostage both by UGC’s rigid rules for promotion, and by the fact any critique or dissent is actively discouraged, even suppressed by the HRDCs.

Over the last couple of years, there have been reports that the organisers at the Centre for Professional Development in Higher Education (CPDHE) – the UGC-HRD centre at the University of Delhi – have explicit links with the Rashtriya Swayamsevak Sangh (RSS).

The director of the CPDHE, Geeta Singh, is closely associated with RSS ideologue Indresh Kumar through an RSS-backed front organisation, Vishwagram. The Vishwagram website and Facebook page is full of photographs of Singh with Indresh Kumar at different events, including one with RSS chief Mohan Bhagwat.

Whatever Geeta Singh’s wider affiliations, the RSS imprint was readily apparent in November and December 2017, when two orientation and two refresher courses were held concurrently at the CPDHE.

Around two hundred and fifty teachers from across the country were subjected to unremitting attempts at political indoctrination with little or no academic content. A teacher from Ambedkar University, Delhi complained that “teachers from four different programmes were pushed into mammoth joint sessions which flagrantly disregarded the norms UGC has laid out regarding their format and objectives.”

Many of the participants who were interviewed pointed out that most of the invited resource persons were not academics, but high ranking politicians belonging to RSS affiliates like the Organiser, Panchajanya, Bharatiya Shikshan Mandal and the Akhil Bharatiya Itihaas Sankalan Yojana (to name but a few), and to the Bharatiya Janata Party. A teacher from the University of Delhi who did not wish to be named stated that a “large numbers of the student cadre of the ABVP (Akhil Bharatiya Vidya Parishad), who were clearly non-participants and had no business being there, were called in for many of these sessions and engaged in virulent sloganeering and cheering, presumably as part of their political training”.

The overarching theme for the programme was purportedly a focus on ‘Bharat Bodh’ (learning about India) and Indian culture, thought and thinkers. However, as a participant from the University of Kashmir, Javed Ahmad, explained, “most speakers launched a sustained verbal assault against secularists, Marxists intellectuals, Jawaharlal Nehru University, liberals, and western civilisation. The Congress Party and Jawaharlal Nehru were singled out for the most vicious attacks.” Mukul Kanitkar of the RSS-backed Bharat Shikshan Mandal, at the 2017 CPDHE courses. Seated next to him is CPDHE director Geeta Singh. Credit: Vishwagram

Rachna Singh who teaches history at Hindu College, University of Delhi was shocked that participants were compelled to give standing ovations to speakers who urged them to shout slogans and take oaths ranging from “Cheeni Maal Talaq Talaq Talaq” (‘Triple talaq to Chinese goods’) to “Mrityu Do to Akhand Bharat Mein” (‘May my death be in Greater India’). One ideologue from the RSS even went to the extent of justifying the destruction of the Babri Masjid, and promised that a temple would soon be built at that site.

The scholarship of secular, liberal historians and others was described as biased and flawed. One particular resource person went to the extent of describing such scholars as “academic terrorists”, who wrote as they did for fellowships and invitations to conferences abroad. Highly inflammatory political rhetoric was interspersed with home-spun wisdom on themes such as how to have a good heterosexual marriage, to not indulge in evils like divorce, and religious ‘cures’ for homosexuality by resource persons whose disciplinary background was either non-existent or unclear.

The implications for serious scholarship

For a programme called “Bharat Bodh” that claimed to further knowledge about India, the country’s diverse histories, cultures, and eclectic range of thinkers were completely obfuscated. One of the participants, Aparna Balachandran from the history department, University of Delhi said, “The only religion discussed was Hinduism. Even Buddhism, Jainism and Sikhism were completely ignored.”

Further, as various respondents pointed out, Islam was vilified, and Christianity exclusively equated with British rule. In spite of the overwhelming focus of the programme on India’s ancient past, no ancient historian from the well-known faculty of history at the University of Delhi (which is just down the road from CPDHE) was invited, leave alone from JNU or Jamia Millia Islamia. 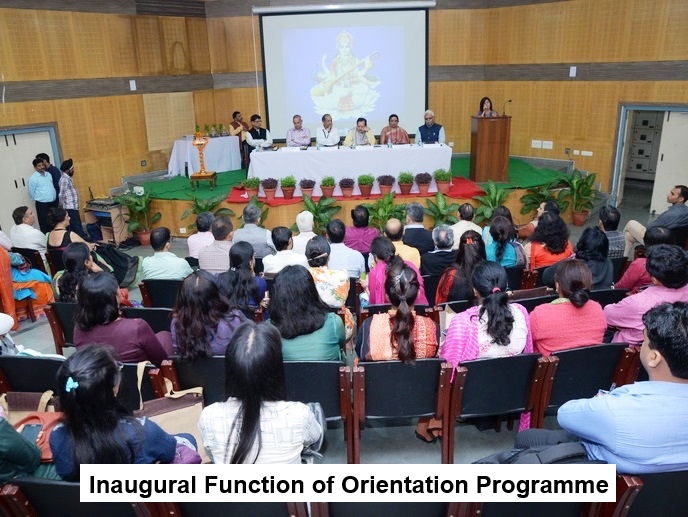 According to Mahesh Gopalan, who teaches history at St. Stephen’s College, University of Delhi, “although the organisers themselves repeatedly professed pride in the fact that the participants were drawn from 22 states of the country, they nevertheless encouraged resource persons to speak in Hindi only, brazenly ignoring all protests from non-Hindi speaking participants.” Others also attested to the fact that even Hindi speaking participants often found it very difficult to understand the highly Sanskritised lectures.

‘Litchi, not apple, was how gravity laws were discovered’

The two particular casualties in this programme were science, and not surprisingly, history. Resource persons affiliated to Vijnana Bharati, the science wing of the RSS, insisted that ancient Indian scriptures are the repository of all scientific knowledge and that western scientists plagiarised these accomplishments, which are being falsely feted today as western in origin. As an example, one speaker claimed that Aryabhatta was the original proponent of the theory of gravity. The insight came to him apparently when a litchi fell on his head – Newton stole these ideas much later, adroitly substituting an apple for the litchi.

In one instance, Rachna Singh recollected that a scientist from ISRO presented a modern day chromolithograph to illustrate the existence of ice-making factories during the reign of Harsha Vardhana. He could not identify the source of the image he had exhibited during the session itself, and sent word the next day that the evidence was from Banabhatta’s Harshacarita. In making various “scientific” claims, participants were frequently told that the evidence came from organisations like NASA.

Reflecting on the program at CPDHE, Mahesh Gopalan, pointed out, “Scholars are no strangers to debate and sharply divergent explanatory models but the arguments made in this forum completely delegitimised the centrality of evidence-backed research.” 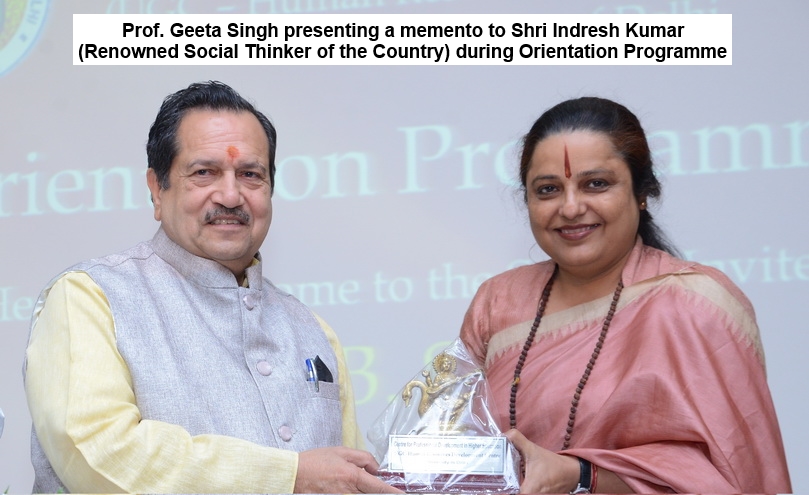 RSS ideologue Indresh Kumar, described as “renowned social thinker of the country” was another invitee to the 2016  orientation programme for assistant professors at the CPDHE, University of Delhi. Credit: CPDHE

A participant who did not want to be named felt deeply troubled by the overall message that India’s identity and essence is drawn from an undifferentiated ancient past represented by texts like the Vedas and that India’s Muslim rulers were portrayed as alien predatory invaders and colonial exploiters. Indeed, the entire period of Muslim rule in India was either ignored or demonised as the time which gave rise to social problems such as caste.

Participants spoke of how one speaker declared that the Turks brought the commode to India, those who refused to convert to Islam were forcibly made into night soil carriers, and herein lay the origin of scavenging Dalit communities seen today. Teachers were exhorted to recover the pristine Vedic past, presumably uncorrupted by the depredations of Islamic and Christian rule. In a bid to appropriate his legacy, many resource persons reiterated that Ambedkar’s conversion to Buddhism ought to be read not as a rejection of Hinduism but as the prioritising of another Indian faith (Buddhism) over possible “foreign” alternatives (Islam and Christianity).

Many outstation participants who had invested time and resources to attend these courses, expressed deep disappointment. One teacher regretted that while “we expected to attend lectures of luminaries but were administered highly vitriolic and crude doses of fantasised history.” What was equally galling was that participants being intimidated into silence with threats of withholding of their certificates, and/or poor grades. Ajaz Ahmad Ganai from the Government Degree College, Sopore, says that he felt “for the first time in his life like a prisoner who is not allowed to ask a question.”

Most of the teachers interviewed had no issues with learning about India, her history, culture and religions. What disturbed them greatly was the passing off of crude, offensive, and divisive political axioms, unsubstantiated by rigorous research, as academic truths. Such events would have been disturbing had they taken place in any context within any university. The fact that these events unfolded within a dedicated space at one of the country’s most prestigious universities meant to train teachers drawn from all across the country implies that its highly unfortunate aftermath shall resonate in many theatres.

Asked by The Telegraph last week about the design of the programme, CPDHE director Geeta Singh described the broad agenda as promoting “Indianness”. “Keeping in mind the recent developments in the universities – the JNU episode and the agitation over Rohith Vemula’s death – we need to keep our campuses sanitised; hence these sessions,” she was quoted as saying.

But other scholars do not accept this logic. Eminent historian Tanika Sarkar said that she was shattered by what she had heard about the CPDHE programmes, and expressed the fear that if college teachers are exposed to such “false and vicious propaganda in the name of teacher training”, then it spells the end of higher education in the country.

Upon learning about what was happening at CPDHE, Apoorvanand, who teaches Hindi in the University of Delhi, wrote to the director pointing out that “she was free to announce a workshop or course on the ideology and beliefs of the RSS. Teachers would then voluntarily register for this course.” But to call them for an academic discourse and then “force them to go through the ordeal of listening to party propaganda” was, he said, “a gross misuse of the hard earned credibility of the CPDHE”.