The police took her outside the auditorium just before President Kovind arrived, and let her back in after he left. 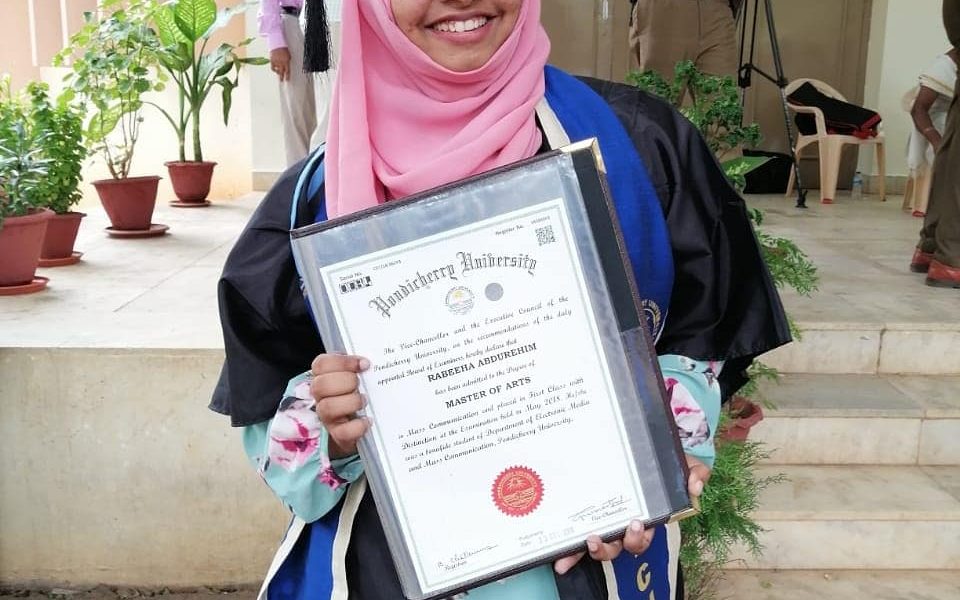 Chennai: Even as the Pondicherry University Students Council had given a call to boycott the convocation held on Monday presided over by President Ramnath Kovind, the ceremony found itself in the news for an entirely different reason. Rabeeha Abdurehim, a 2018 batch student of mass communication in the university and a gold medallist, was asked to leave the convocation hall allegedly for wearing a ‘hijab’ when the president was on the dais.

Rabeeha was later conferred with the degree but refused to accept the gold medal to protest the ‘humiliation meted out to her and to protest the repression of students across the country.’

“The students were asked to be at the venue an hour before the president came. I followed all the protocols and sat in the seat allotted to me. A minute before the president came, a police official came and said they needed to have a word with me and took me outside. The door was locked. Then I realised the programme had started. I was still asked to wait outside. When I asked the police why I was made to wait outside, they said nothing. In fact, they said they have no idea and I was asked to be seated [outside] by the senior superintendent of police” Rabeeha, originally from Kozhikode, told The Wire.

The young student who hopes to become a journalist was allowed inside the hall only after President Kovind left. “When my turn came to receive the gold medal, I rejected it because I had a feeling that I was asked to leave because of the way I look and maybe ‘I would do something.’ Of course, I would not, I was only there for my graduation ceremony.”

But Rabeeha also insists it was not just this incident behind her rejection of gold medal. “It did give me the courage to do it, I was insulted and I had to react. But I was doing it in solidarity with all the students facing police brutality across universities for their opposition to the Citizenship (Amendment) Act (CAA).”

Rabeeha walked to the stage when called, got her certificate and refused the gold medal. She told the assembled audience she was doing so in solidarity and she also narrated what had happened to her. “I feel it is a blatant violation of my rights, [an act of] blatant discrimination.” Rabeeha pointed to the Students Council decision to boycott the convocation ceremony and said a friend of hers “had already boycotted the ceremony for the same reason.”

“To me, this is the most peaceful way of protest” Rabeeha says. “It is a very peaceful message. I wanted everyone to see what the educated youth today are capable of.”

Rahul Alwal, senior superintendent of police in charge of Pondicherry, says he was not aware of the ‘controversy’. “I was part of the law and order arrangements, and was not aware of what was happening inside. I was handling routes, VIP etc.”

He says there was no order to the effect when asked if there was any explicit order to remove her or students like her. “We were generally keeping tab on any kind of security threat but certainly not from the students side” he said.

.Meanwhile CPI(M) MP from Madurai S. Venkatesan has demanded that President Kovind “reach out to Rabeeha and express concern over the incident”.

“The singling out of Rabeeha is a direct fall out of the prime minister’s recent remarks that ‘those inciting violence can be identified by their clothes.’ It is sad that the prime of this country could speak something so blatantly insensitive, which leads to bright, young students like Rabeeha – who symbolise the hope and future of this country – being victimised for what they wear,” Venkatesan said in his letter addressed to the president. He also demanded that the president personally hand over the gold medal to Rabeeha.

“Such a noble gesture on your part will send positive and encouraging signals to not just Rabeeha but to the entire student community of this country.” Venkatesan said.

Note: The story has been updated to include a response from SSP Rahul Alwal and the quotes of Madurai MP S. Venkatesan.