Given Tag of 'Eminence' by Modi Govt, Reliance's Jio Institute Doesn't Even Exist Yet

The only public information about the Jio Institute, now one of six 'institutions of eminence', is a speech by Nita Ambani where she said it would be "a university from the gates of which will emerge our future leaders, musicians, scientists, and Olympians."

New Delhi: The news of a Reliance-promoted educational venture – about which there is no information in the public domain – getting clubbed together with the Indian Institute of Science and the IITs of Delhi and Bombay as ‘institutions of eminence’ was astonishing by any yardstick, and true to the Modi government’s style of doing business, was broken on Twitter by HRD minister Prakash Javadekar on Monday afternoon. While the IISc and the two IITs have a stellar reputation and BITS Pilani and the Manipal Academy of Higher Education have a solid track record as teaching institutions, the selection of Jio Institute – a project of Nita Ambani’s Reliance Foundation – raised eyebrows all around as it has not even been established yet.

Its inclusion in the list of six institutions of eminence selected from among dozens of applicants has prompted accusations of cronyism, given the proximity of Reliance Industries and its promoter, Mukesh Ambani, to Prime Minister Narendra Modi.

The institute’s name ‘Jio’ connects it to Reliance’s mobile telephony business, which itself was launched in an unprecedented manner with Modi’s face used prominently by the company in its advertising despite government rules prohibiting this.

The only information publicly available about Indian education’s latest institution of eminence comes from remarks Nita Ambani made at a media event in March 2018, where she spoke about the Reliance Foundation’s plans to establish a world class university:

“A university at the cutting edge of research and innovation. A university that focuses on education and sports, art and culture,” she said without giving a timeline for setting up of the institution.

The university, she said, will collaborate with the top universities around the world and prepare future generations to face the world, with knowledge and skills.

“A university from the gates of which will emerge our future leaders, our musicians, our scientists, and our Olympians,” she said. “Building such a university is our dream at Reliance Foundation.”

The selection of Jio and the other institutions of eminence was made by an empowered expert committee (EEC) set up by the University Grants Commission under the UGC (World Class Institutions Deemed to be Universities) Regulations, 2016.

The EEC is headed by N. Gopalaswami, a former chief election commissioner who is now head of the RSS-affiliated Vivekananda Educational Society. Its other members are Renu Khator, chancellor of the University of Houston, management professor Tarun Khanna of Harvard University and Pritam Singh, a former director of IIM, Lucknow. Their names were chosen by the HRD ministry and ratified by the appointments committee of the cabinet headed by Modi.

The rules allowed for existing government and private universities and institutes to apply. The UGC also also provided for promoters to submit a “completely new proposal to establish a World Class Institution Deemed to be University.” It was under this provision that Reliance applied and got selected.

The committee chose to ignore the National Institutional Ranking Framework’s scores, according to which Manipal and BITS Pilani came in at 18 and 26 respectively. Though the IISc topped the NIRF chart and the two IITs chosen as institutes of eminence were ranked 3 and 4, the exclusion of a host of other top scoring public and private universities is likely to generate heartburn.

Any institution selected has 10 years to make it to the top 500 ranking of world universities.

The UGC’s rules for applying stipulated that “the Sponsoring Organisation should have identified the first Chancellor and first Vice-Chancellor and the core team who will implement the work of setting up the World Class Institution Deemed to be University. All of them should have very high qualifications and wide experience.”

So far, nothing is known about Jio Institute’s chancellor, vice chancellor and the other team members with “very high qualifications”.

As pointed out by Business Standard reporter Nitin Sethi on Twitter, the UGC (Institutions of Eminence Deemed to be Universities) Regulations, 2017 also have two eligibility clauses that would have allowed Reliance’s university-in-the-making to make it the institutions of eminence list. The first, clause 6.1 (iii), says,

Sethi points out that there was no mention of a “greenfield” university in the original budget announcement for the institutions of eminence.

The second clause that would have supported Jio’s case, clause 6.1 (ix), says,

“It should have sufficient evidence to show that it has experience in translating plans into real achievements in any field (not necessarily in the field of higher education, but preferably in it) as per its plans.”

On Twitter, Ayesha Kidwai, who teaches linguistics at Jawaharlal Nehru University joked that the HRD ministry had run into ‘spell check issues’, confusing eminence with imminence:

On a more serious note, she told PTI,  “[Jio Institute] doesn’t have a campus, a website or any alumni and it has left behind prominent IITs as well as private players like Ashoka University and OP Jindal Global University. It is yet to be established but will already be marketed as a world class institution by the government. Can’t we see the conflict of interest?”.

Hariprasad KM from IISc-Bangalore, which was also accorded the “Institute of Eminence” (IoE) tag, wondered how the decision was taken.

How did @PrakashJavdekar evaluate this Jio Institute to decide it was better than IIT M or IIT KGP or so many other Institutions? How can an Institution that is in the process of being set up be declared Institution of Eminence? What are we missing here ? #Jioinstitute

Responding to these and other questions, the UGC issued a statement Monday night defending the selection of Jio Institute, noting that the rules themselves envisaged greenfield projects: 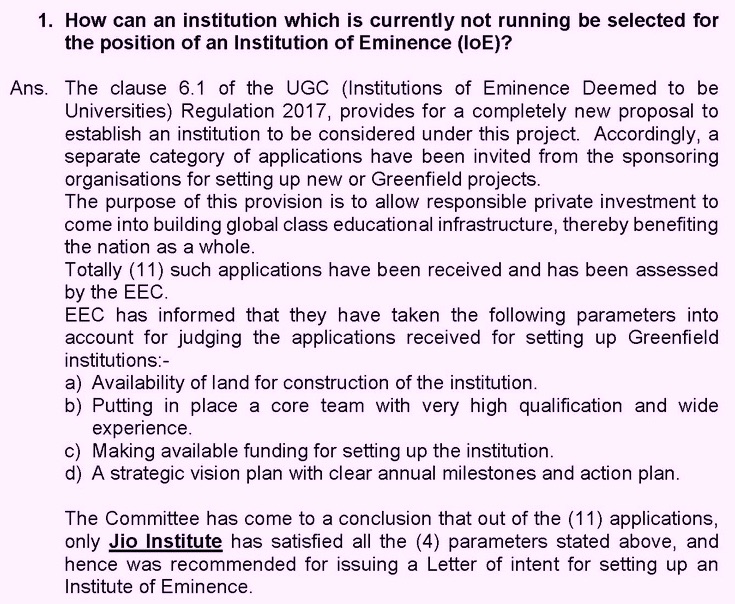 The institutions of eminence (IoE) scheme of the Human Resource Development (HRD) Ministry was originally intended to lead to the selection of 10 public and 10 private universities that would enjoy complete academic and administrative autonomy. While the government-owned institutions would each be eligible for grants of up to Rs 1000 crore over a five year period, the private IoEs would not be entitled to these grants. However, they would be able to apply for special research funding from the government.

Curiously, the EEC said it found that only six institutions showed the potential to find a place among the top 500 global universities.

Explaining the rationale for creating IoEs, Javadekar tweeted, “We have 800 univ, but not a single university in top 100 or even 200 in the world ranking. Today’s decision will help achieve this.  Improving ranking needs sustained planning, complete freedom & public institutes getting public funding.”