As the institution celebrates its Foundation Day, it might be worth remembering the role of Gandhi in its formation and sustenance. One of the several prominent educational institutions established in response to the call of non-cooperation by Mahatma Gandhi was Jamia Millia Islamia.

The minority educational institution, which is also a central university, began as the direct result of non-cooperation and the Khilafat movement. In August 1920, Gandhi had given a call for non-cooperation, asking Indians to boycott the then British government’s educational institutions, the courts, government services, foreign goods and elections, and to refuse to pay taxes.

The inaugural meeting of Jamia was held in the Jama Masjid of Aligarh Muslim University (AMU). At the time of founding Jamia, its founders, such as Zakir Hussain, were associated with AMU. Jamia was later shifted to Delhi, first to Karol Bagh and then to Okhla, where it is situated now.

A new book titled Jamia Aur Gandhi (Jamia and Gandhi) informs us that Gandhi’s relationship with the institution was not just limited to the fact that it was established in response to the call given by Gandhi. It shows us that Jamia and Gandhi shared a life-long relationship.

Also read: Candidates Forced to Take up Low-Paying Jobs in Universities Due to Quota Stand-Off

Written by a journalist and an alumnus of Jamia, Afroz Alam Sahil, the book documents how Gandhi contributed to the development of the institution over the years, which is currently celebrating its 99th Foundation Day.

Sahil writes in the preface of the book:

“Gandhi contributed a lot to Jamia and he also received a lot from the institute. It wouldn’t be an exaggeration to say that Gandhi had a special affection towards Jamia. As much as Gandhi understood Jamia, the institute also gave an equal amount of love and respect on him.”

According to the author, Gandhi’s wife Kasturba spent some crucial days of her life in Jamia as well. Moreover, Gandhi’s son Devdas served as a teacher in the institution.

Gandhi’s grandson Rasiklal (son of Hiralal) not only studied in Jamia but also breathed his last there. 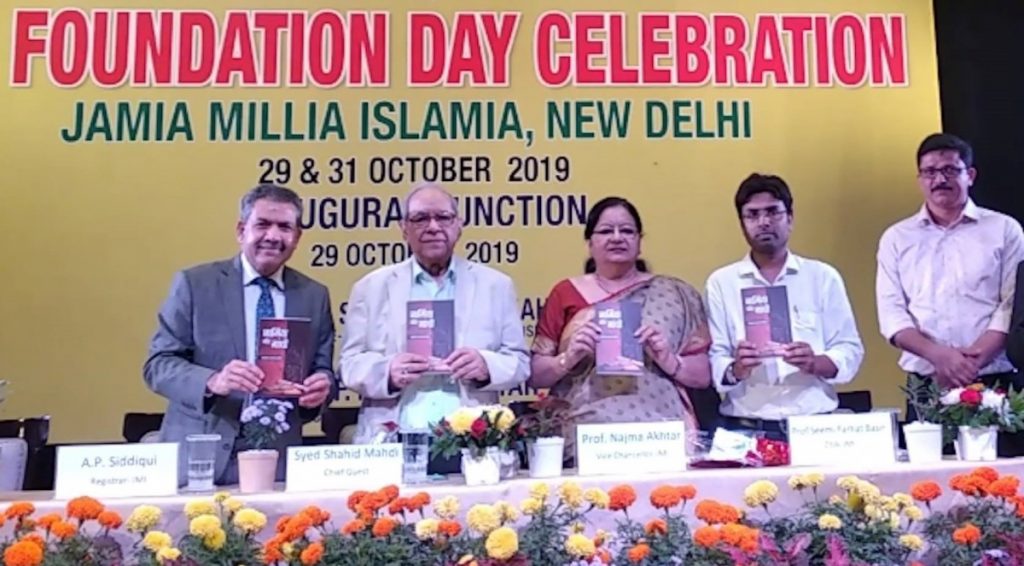 In January 1925, when Jamia was going through a serious financial crisis and there were talks of closing it down, Gandhi, insisting that it must continue, is reported to have said to Hakim Ajmal Khan, “Aapko rupaya ki diqqat hai to mein bheekh maang lunga (‘If you’re facing a financial crunch, then I am ready to do beg’).”

This encouraged Hakim Ajmal and his friends to keep Jamia going. Gandhi also made a trip to Bhopal and appealed to the masses in Patna. He also wrote articles in his journals — Young India and Navjivan — to raise funds for Jamia.

For Gandhi, Jamia was not just another nationalistic project but an initiative which he hoped would serve as a living example of Hindu-Muslim unity. In most of his letters and addresses concerning Jamia, he can be seen emphasising on this point.

Moreover, Gandhi’s vision about Jamia was one of a Muslim educational institution which would be an abode for training Indian citizens, along with one which would safeguard the Islamic identity. Sahil quotes the educationist and former vice chancellor of Jamia, professor Mohammad Mujeeb, while recounting an incident when Gandhi had been suggested by a friend to remove the word ‘Islamia’ from the university’s name, to it make it easier to raise funds for the university.

To this Gandhi had responded by saying that, “If the word ‘Islamia’ is removed from Jamia’s name, then I would not be interested in the educational institution.”

Opposing the collection of funds for Jamia, Dr. B.S. Moonje, leader of the Hindu Mahasabha, wrote a letter to Gandhi on January 18, 1928. In his letter, Moonje alleged that communal institutions (like Jamia) are primarily responsible for creating separation between communities, which results in communal strife.

In response to Moonje’s letter, Gandhi wrote to him on January 27, 1928, saying, “Don’t we have many institutions in our country which are purely Hindu? And there are no restrictions in this Muslim university on the admission of Hindu students. In fact, many Hindus have graduated from this University and they are working today in the service of the nation. There are many Hindu students studying here.”

Also read: As Freedoms Continue to Be Curbed in JNU, It Cannot Be Business as Usual

Gandhi was a lifelong supporter and friend of Jamia. Wherever he went and whenever he got a chance to speak about Jamia, he tried his best to promote and support the institution.

Upon his return to Delhi from Nohakhali on September 9, 1947, the first thing that he had reportedly asked is, “Is Zakir Hussain fine? Is Jamia Millia safe?”

The next morning he visited Jamia and Okhla, where refugees of the Partition were staying. This proved to be his last visit to Jamia, as within six months of this visit, he was killed by Nathuram Godse on January 30, 1948 during the evening prayers in Delhi.

Sahil notes that upon hearing the news of Gandhi’s assassination, every member of Jamia was sad and the institution was engulfed in gloom, remembering the friend and benefactor who had contributed towards the development of Jamia immensely.

As India celebrates the 150th birth anniversary of Mahatma Gandhi, we need to remember this legacy of Gandhi because imagining the legacy of Jamia without Gandhi and Gandhi without Jamia seems impossible.