Factcheck: Why You Shouldn't Be Taken In by the 'AMU is Bad, BHU is Good' Propaganda

In their relentless attempt to tarnish one of India's better educational institutions, Aligarh Muslim University, Hindutva publicists do not let facts come in the way. 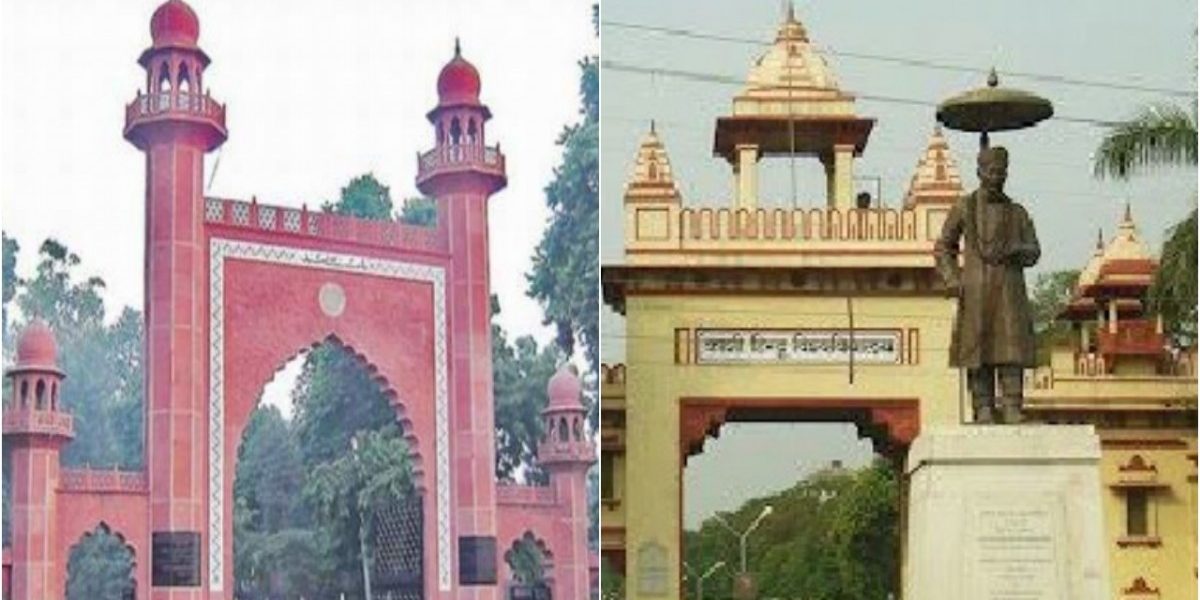 Entrance to the Aligarh Muslim University (left) and the Banaras Hindu University. Photos: AMU and BHU

“Facts, even if unpleasant,”Amit Agrahari’s Twitter profile proudly declares. Agrahari is a data journalist and columnist with a publication called TFI Post (formerly Rightlog.in). He recently authored a post comparing the prospects of Banaras Hindu University (BHU) and Aligarh Muslim University (AMU), pitting their ostensible religious affiliations against each other and asking if one of them performed better.

It turned out in his analysis that AMU was the deficient of the two. Agrahari wrote (quoted verbatim):

“The tale of two universities with Hindu and Muslim in their names, receiving similar amount of funds from central government, will leave you with one concluding remark: The government needs to look at the Return on Investment more seriously, and as taxpayers, we need to ask more questions about how our money is being spent.”

Abiding by his prescription, however, Agrahari appears to have dropped some unpleasant facts from his analysis and resorted instead to the fallacies of incomplete evidence, faulty generalisation and relative privation.

At the outset, it’s not clear what he has measured to arrive at his assessment that AMU is the worse of the two because both his principal contentions – that AMU counts members of “terrorist organisations like SIMI, Indian Mujahideen and Popular Front of India” among its alumni and that its engineering department “could not make it even in the top 100 engineering colleges of the country” – are wrong.

Agrahari’s primary source, by his admission, was Wikipedia, but the page displaying AMU’s alumni is resplendent – studded with names like Saadat Hassan Manto, Dhyan Chand, Anwara Taimur, Zakir Hussain, André Weil and various justices of the Supreme Court, among others. The terrorists and jihadis that Agrahari claims graduated from AMU are not to be found here. But they could be if you had to “identify all of them by their clothes”, as Prime Minister Narendra Modi did shortly after the first incidents of violence at Jamia Milia Islamia.

Note that Wikipedia is almost never accepted as a source because (a) anyone can edit and revise them, and (b) its pages are populated based on information obtained from other sources, mainly reports in the mainstream press and occasionally scientific papers. As an example of its unreliability, the edit history of the AMU page shows a change at 7:02 am on December 30 – “The University is known for spreading Muslim Extremism in the country” – from an IP address in Karnataka. The statement is neither cited nor explained.

A user with the same IP address also similarly edited the AIMIM page to call it a terrorist organisation and the Hindu Mahasabha page to remove the words “right-wing Hindu nationalist” from its designation as a “political party”.

The sword cuts both ways, of course. Another user, with an IP address traced to West Bengal, edited the AMU alumni page to add: “Faridul Qadar, first of his name, orthodox economist, extracter of oil, overseer of distribution. When he stops working, India stops moving. Stop asking where is Vikas? Start asking where is Farid?”

Until a volunteer editor evaluates these changes, they will stay on their respective pages and – to the uninitiated reader – masquerade as bits of truth.

Beyond Wikipedia itself, Agrahari’s comment echoes one by Naveen Jain, a member of the Bharatiya Janata Party and mayor of Agra, who alleged in February 2019 that AMU was becoming a “hub of terrorists”. His remark followed the armed forces’ killing of Manan Wani, a former student of AMU who had dropped out and become a militant in Kashmir. A handful of students at AMU had mourned Wani’s killing on campus and attempted to offer prayers, before other students intervened.

On the second count, Agrahari is wrong based on official data. According to the 2019 edition of the National Institutional Ranking Framework (NIRF), AMU’s engineering department ranked 40 in the country and BHU ranked 11. Among universities, BHU was ranked third and AMU, 11th, and overall, BHU was ranked 10th and AMU 18th. So if the NIRF’s metrics are to be believed, AMU is far from being a write-off, and quite close to BHU in terms of academic performance.

That BHU’s engineering faculties were granted “IIT status”, a claim featuring in Agrahari’s exposition, is important because the badge carries with it some prestige as well as substantial funding opportunities. This said, it is disingenuous to completely dismiss one university because it wasn’t exalted the way another was. For example, at position 40, AMU is still ahead of the College of Engineering in Pune, the alma mater of M. Visvesvaraya.

However, this shouldn’t become an excuse to legitimise the NIRF itself – or any other university ranking system for that matter – most of which have been beset with similar issues.

Another claim in the attempted takedown – that BHU is superior because it prized science and technology education – holds even less water. This argument is more in line with an increasingly trenchant belief among conservatives that only the political right has managed to let itself be guided purely by reason (recall the words on Agrahari’s Twitter profile) – a narrative that undermines the social sciences and humanities, and intends to cast non-scientists as anti-fact.

Indeed, beyond the NIRF as well as comparisons with other institutions, AMU spent the Rs 1,115.59 crore it received from the University Grants Commission in 2017-2018 to – among other things – fund scholarships for nearly 4,000 students and provide financial assistance to another 779 students the same year. The university’s 2017-2018 annual report also claims that its h-index, a measure of scientists’ productivity and relative importance of research output, increased from 97 to 116 in a year. The corresponding figure for BHU was around 40 in 2012; the current data is not readily available.

Again, as with Wikipedia and the NIRF, scientometric measures like the h-index are susceptible to being manipulated by researchers. But while it’s dangerous to make important decisions based on the precise values of such figures, they indicate that AMU’s research undertaking is not to be scoffed at either.

Finally, Agrahari writes, “Almost seven decades after partition, AMU has maintained its ‘minority institution’ status … and reserves 50% seats for the Muslim community, and does not implement SC/ST/OBC or even the Economically Weaker Section quota.”

Ignoring for a moment that members of the political right are happy to root for the reservation system when it suits their argumentative needs, this is the factual position: the Supreme Court referred the matter of AMU’s minority status to a seven-judge bench in February 2019, and it remains sub judice. If the bench rules against the institution, AMU will become a central university and will lose the right to implement its specialised quota, a power it currently derives from Article 30 of the Constitution as well as the circumstances of its founding.

In 2014, AMU’s vice-chancellor turned down a demand by female students to use the Maulana Azad Library, to which they had until then had limited access. But an Allahabad high court judgment later that year forced AMU to revise its position. As for BHU, the campus was rocked by a women’s protest in 2017 alleging mistreatment and harassment of female students and the imposition of discriminatory rules – a charge to which the administration responded by having police lathi-charge protesting students and lodge FIRs in the hundreds.

There also appears to be a howler in Agrahari’s attempted smackdown. He writes:

The full name of the renowned political scientist Iqbal Narain, who served as BHU’s VC, is apparently Iqbal Narain Srivastava, according to a friend of the family who wrote some reminisces about him in a blogpost, and it is safe to assume the VC was not Muslim. Interestingly, there was another Iqbal Narain who was an iconic figure at BHU for having raised funds for the university. He was a Kashmiri Pandit.

Elsewhere, Agrahari attacks AMU’s founder, Sir Syed Ahmad Khan for having been an early advocate of the idea that Hindus and Muslims were separate nations, but conveniently ignores the fact that the phrase he cites –  “Hindus and Muslims are two Nations”– was also used by Hindutva ideologue V.D. Savarkar, whose portrait hangs at BHU.

Any large institution that has lived through more than one social or political era is bound to have been on the wrong side of things at some point. Brandishing these moments as sufficient cause to condemn the institution, ignoring the glut of positive examples and opportunities it has offered over the decades, is foolish. Both AMU and BHU are among India’s better universities, historically and at the present time. Using one to disparage the other reflects nothing but the pursuit of a communal agenda.