How India's First ISP Grew Among the Country's Universities

Although it set up India's first inter-campus network, ERNET's biggest success was in having trained a generation of individuals skilled in data networking. 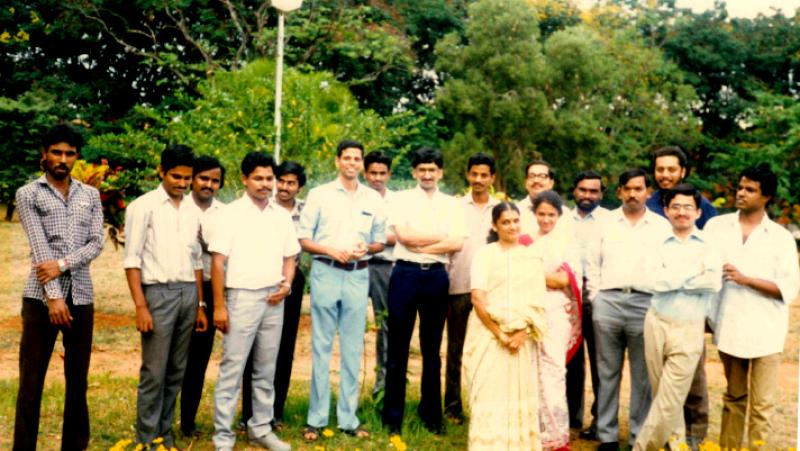 Bengaluru: India has the second largest number of internet users in the world today, with about 350 million people online either through their smartphones or computer. With the advent of fibre optics and 4G technologies, the race for providing internet services is hotter than ever, with the lead taken by close to 20 internet service providers (ISPs), including Airtel, BSNL, and Reliance Jio.

Let’s step back 30 years, to a time when India had a few premier educational institutions and the internet was in its infancy; how were these institutes connected then? They were, through the Education and Research Network, better known as the ERNET Project. It kept institutes around the country in touch with each other and introduced research in networking. ERNET had been initiated in 1986 by the Department of Electronics (DoE; today called the Department of Electronics and Information Technology, DeitY) and the United Nations Development Program (UNDP), with some financial support from the Government of India.

In its first avatar, eight premier institutes participated in ERNET. They were the Indian Institute of Science (IISc), Bengaluru; the National Centre for Software Technology, Bengaluru; five IITs (Delhi, Bombay, Kanpur, Kharagpur and Madras); and the DoE. Its first task was to set up a local area network (LAN), which entailed linking up the computers within the campus of an institution, and then connecting that network with all others like it in the various institutions using a wide area network (WAN). Thus, an inter-campus networking service was created, providing an opportunity for many to work with computers. “In June 1986, when the ERNET project proposal was being finalised, I saw a computer for the first time in my life and started to learn the very first day,” recollects Chandrika Shridhar, who worked on ERNET from 1986 to 2016.

As the next logical step, IISc aimed to provide email access to its various departments using the Unix to Unix Copy Protocol (UUCP), a predecessor to the currently used TCP/IP protocol. UUCP served as the backbone to sending and receiving emails and could also dial in to a similar system in the US – the UUNET – and exchange emails with the universities there.

Setting up an email server was a breakthrough since it was a first-of-its-kind for the country. It involving the laying of more than a kilometre of Ethernet cables, some of them running underground, to connect systems located in different departments.

ERNET evolved over time under the guidance of Anurag Kumar, the current director of the IISc and who became the ERNET project coordinator in 1988. Kumar’s expertise in computer networking came during his days at Bell Labs Inc., which had been at the forefront of networking research around the 1970s. After returning to India, he took up the enormous task of setting up the campus-wide network. “Although the internet started in the ’70s, it took some time to come to India. There was also a need for inter-campus networking and networking among the universities to coordinate their research efforts,” Kumar remarks. “ERNET was a nationwide package that connected different universities in the country.”

By 1992, several universities in Bengaluru were dialling in through ERNET to use the networking service, which had become the country’s first internet service provider. And only three years later, internet access to households was provided by Videsh Sanchar Nigam Limited (VSNL; now TATA Communications). In 1997, ERNET went through its final project review and the expert panel concluded that it had been a success. The UNDP also praised the project as one of the most successful initiatives it had funded. Following this, and in the face of fierce competition from private internet providers, the ERNET project became ERNET India in 1998, an autonomous society under the DoE. (The DoE would become a ministry in 1999, the Department of IT in 2001 and finally DeitY in 2012.)

Although the project had been initiated to set up an inter-campus network, it evolved to become the country’s first attempt at exploring the internet. More importantly, its lasting legacy is in having trained a generation of individuals skilled in data networking. As Gopi Garge, who worked on ERNET between 1988 and 2016, puts it, “ERNET was an experience of my lifetime. Networking learnt right through as it evolved, and being there and doing that, [was] priceless.”

After the formation of ERNET India, the focus shifted from enabling research to providing internet services. In this capacity, ERNET India serves more than 1,300 institutions across the country and, apart from acting as an institutional ISP, it also provides consultancy, project management and value-added services like web hosting and e-mail management.

With the internet being a commonplace resource today, what does the future hold for the brightest minds in our universities? Experts suggest that the time is now ripe to ride on the wave of the internet of things (IoT). “The current government is pushing for IoT through startups. This is good but there is no overall coordination among the different researchers and institutes,” says Kumar. “We need to have a consortium of the startups and researchers to advance research in the field. IoT is similar to ERNET in the 1980s, still in its infancy. It would be worthwhile to have an ERNET-like effort for IoT.”

This article was originally published by Research Matters and has been reproduced with permission.