One Egg per Student Proves 'Too Expensive' for Jharkhand Government

Citing rising prices, the BJP government has reduced the number of eggs supplied in the mid-day meal from three to two in Jharkhand. Eleven states ruled by party do not supply any.

The non-distribution of eggs has long been opposed by activists and nutritionists alike. Credit: Flickr

New Delhi: In keeping with its party’s overall aversion to eggs, the BJP government in Jharkhand has decided to reduce the number of eggs supplied per week to children under the mid-day meal scheme from three to two. This step has apparently been taken in view of the rising price of eggs.

According to Right to Food campaigners in the state, the Jharkhand government earlier allotted Rs 4 per egg. With the increase in the price of eggs, it has revised its allotment to Rs 6 per egg. But instead of increasing the total budget to include with the inflation in the cost of eggs, the government has decided to serve one less egg per child per week.

The introduction of eggs in schools, and later in anganwadis, was considered one of the few noteworthy steps taken by Jharkhand government to improve child nutrition in the state.

The Wire earlier reported how Jharkhand and Tripura were among the few BJP-ruled states that distributed eggs in MDM scheme. Overall, there are 11 BJP-ruled states that do not serve eggs despite the National Institute of Nutrition making it compulsory under the mid-day meal scheme. There are three other states in which BJP is a coalition partner, and three non-BJP states, which do not serve eggs under the scheme.

There are 12 states in the country which serve eggs under the MDM scheme with Andhra Pradesh and Tamil Nadu providing as many as five per week.

The non-distribution of eggs has long been opposed by activists and nutritionists alike. Eggs have been established to be an excellent source of protein and all essential nutrients, except vitamin C, for young children. 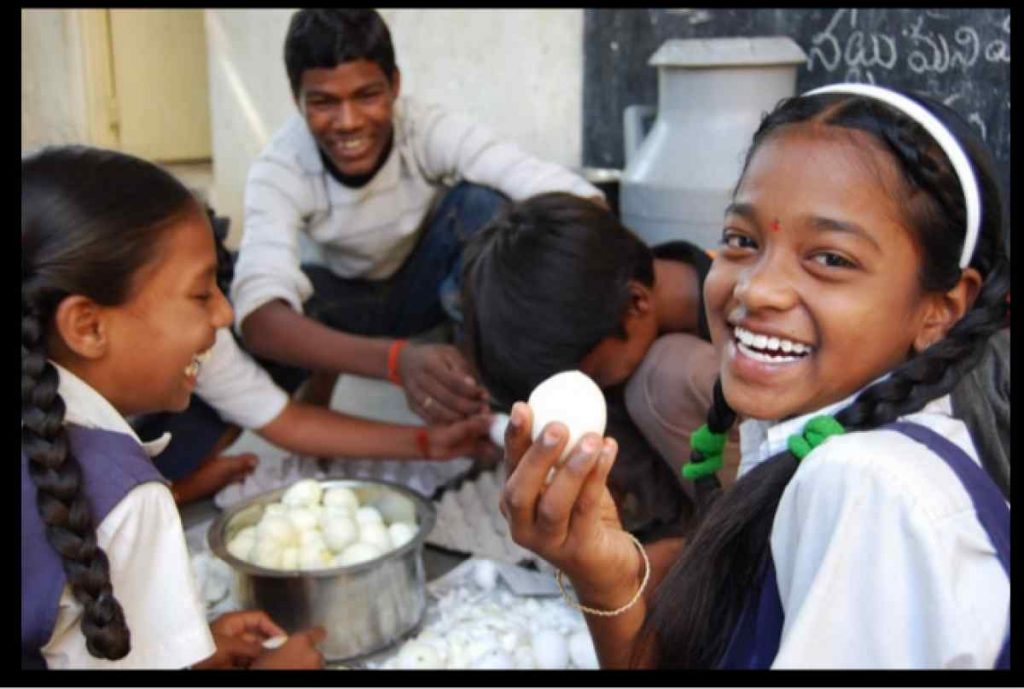 Yet, an “egg map” – which illustrates how many eggs are distributed per week in mid-day meals served in schools and anganwadis across the country – last year established a clear absence of the commodity from the menu in most BJP-ruled states.

The National Institute of Nutrition, which works under the aegis of the Indian Council of Medical Research under the Union ministry of health and family welfare, made the provision of eggs compulsory in mid-day meals, as they are considered cheaper, safer, more nutritious and easier to procure than alternatives such as milk or bananas.

Children in Jharkhand among most malnourished

In Jharkhand, the need for providing eggs under the MDM scheme has long been advocated because children in the state are among the most malnourished in the country. Eggs were finally included in the state’s mid-day meal programme in 2016.

According to the National Family Health Survey 4 conducted in 2015-16, 35.8% children were underweight across the country. In Jharkhand, the ratio was significantly higher than the national average at 47.8%.

Also read: In Uttar Pradesh, Mid-Day Meal Continues to Be a Recipe for Disaster

According to the campaign, eggs are a safe, affordable, tasty and protein-rich source of nutrition for children.

‘Central contract for egg supply to anganwadis not functioning properly’

In Jharkhand, the scheme took off well but is now showing signs of weakening. The activists are concerned about the centralised contract for supply of eggs in anganwadis too. Under the current arrangement, Tamil Nadu-based “Kisan Poultry Farms” (KPF)  provides eggs in accordance with a centralised contract.

However, the Campaign insists that it is a KPF is a “shell company of Christy Friedgram Industry, which is being investigated for large-scale fraud in similar ICDS-related contracts in Tamil Nadu.”

“In Karnataka, too, Christy Friedgram Industry has been blacklisted and there is a pending case by the Lok Ayukta in the Supreme Court,” the Campaign has pointed out.

Stating that the contract stipulates that KPF should arrange for good-quality eggs to be delivered to anganwadis, the Campaign said it has observed that often the agreement is often not followed. The eggs served in in different parts of Jharkhand have come up rotten. In some cases, delivery was irregular or the eggs were not delivered at anganwadis and the workers were compelled to collect them themselves.

All these points have been highlighted by the Campaign in a letter sent to Jharkhand chief minister, Raghubar Das.

The Campaign has also demanded that instead of reducing the number of eggs in mid-day meals, the state government should increase the quantity to six per week. It has also sought termination of the centralised contract for eggs in anganwadis and its replacement with a supply arrangement, similar to the one that exists for mid-day meals.