Education and Employment Drew Blanks in the Interim Budget

The new vision wants youth to figure out education and skills on their own but still expects them to be the drivers of economic progress.

Credit: Reuters/piyushgoyal.in; illustration by The Wire

Piyush Goyal, presenting the interim budget, called it a road map for peoples’ development – a fitting description for an election year budget. Accordingly, it contained the expected sops to farmers (income support), to the middle class and home owners (increase in income tax and rental income thresholds) and to workers (social security in terms of health and pensions), as the big-ticket announcements.

The reining in of the fiscal deficit (3.3% to 3.4%) and the increase in tax collections – induced by both GST and demonetisation – were trumpeted as achievements and signaled perhaps the area where the money for the sops may come from. As agreed across commentators though, we will have to see the numbers to know exactly how that will work.

However, the star section of the speech was arguably the 10-dimensional vision statement for building a $10 trillion economy in the next ten years. It contained the expected thrust areas like digital India, rural industrialisation, pollution-free India, food self-sufficiency, health and minimum government. Developing a space programme and a transport revolution led by renewable energy were also thrown in to give it a modern forward-looking science and technology oriented spin.

But some critical areas were left out, among them jobs. Skirting around the issue (and the controversy recently created by the goings-on in the Statistical Commission), Goyal made no promises in that area. In fact, the only statement made in this regard, was to say that the “public sector and factories” are no longer the areas where employment can be expected to come from – instead self-employment led by the youth and start-ups were the new growth areas.

Another area that drew a complete blank was education – a neglect that goes in tandem with that of employment generation. Unsurprisingly then, neither figured in the vision statement for building a $10 trillion economy. While the first element of the vision included infrastructure both physical and social, the only concession made to education was the development of a “science-oriented education system”, a statement that hangs in the air with no roots whatsoever.

So how does one read this vision of India and place it in the context of peoples’ development, that Goyal claimed it to be a road map of? Looking at what it says (or does not say) about education and employment – both inextricably linked – it is clear that it is neither a coherent vision and nor is it people oriented. It is a vision that systematically excludes the poorest and most marginalised and avoids confronting one of the biggest crisis in the economy: that of employment and the employability (and education) of the youth. 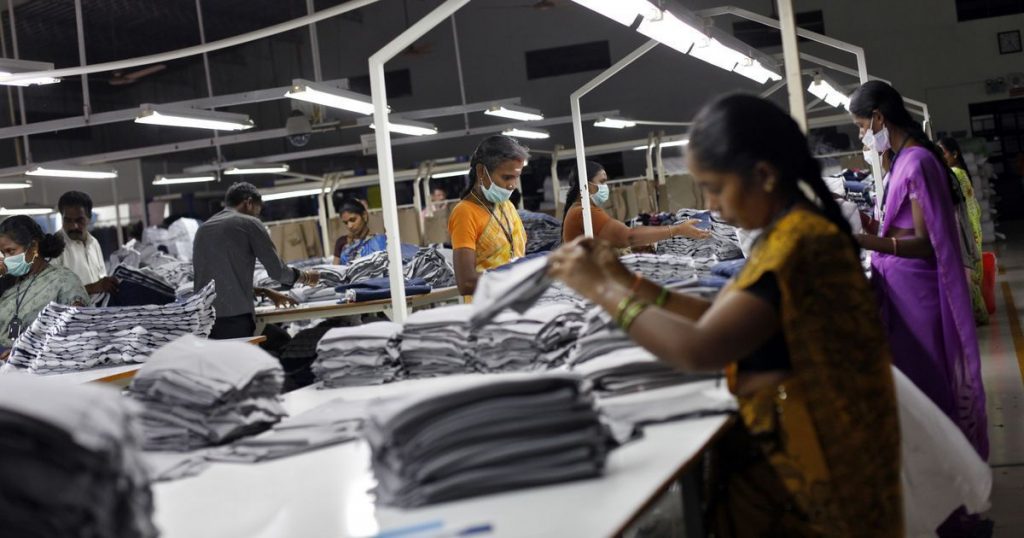 The public sector and factories are no longer generators of employment, the finance minister said. Credit: Mansi Thapliyal/Reuters

Starting with education, it is clear that the vision does not even seek to bring the millions of children out of school into the mainstream of basic education. This is an unfortunate re-iteration of the fact that children do not get recognised as “people” in this country. Even the Rs 6,000 per year support provided to farmers will not afford quality education for their children.

Similarly, the paltry increase of Rs 6,000 crore for the National Education Mission can barely make a modest dent in the massive shortages, physical or human, required to meet minimum standards in schools. Bringing children into the system is thus not even a twinkle in their eyes.

However, making a “science oriented education system” is – that too from one that is currently plagued with less than minimum learning levels. But from where will this emerge? The investment required to improve quality and lead to minimum learning outcomes – recognised every year to be abysmal – is not even a consideration in this vision. And yet it is the youth on whom the government is placing the burden of being “job-creators, not job seekers”! Of being at the fore-front of digital start-ups that will lead the country to a 10 trillion-dollar economy.

Surely it cannot refer to the 50% of the rural male youth or 44 % of the rural female youth who cannot even do simple math calculations (ASER 2018 report), that are expected to bring about this revolution? What is the vision for these youth, then? How are they a part of the peoples’ development roadmap?

Unfortunately, even when the vision talks about rural industrialisation, it leaves out factory jobs. This in particular, is a surprising exclusion seen in context of the fact that at the start of this government, skilling for industry was the leading plank of a proposed new educational policy. Then HRD minister Smriti Irani was seen urging district education officials across the country to map skill requirements of industries in their area and gear the education programmes toward providing the required skills. The Skill India Mission was all about developing skills for employment generated by manufacturing.

Could it be that the failure of industry to both invest in the skilling programmes and provide jobs has led to an abandonment of this vision? And what is it being replaced by? The new vision articulated today appears to be leaving the youth to their own devices – to figure out their education and skills on their own, without state or industry investment – but still be the drivers of great economic progress through start-ups, especially in digital technology. There could be no better example of an incoherent vision.

And finally, the vision talks of a “pro-active and responsive bureaucracy”, again supposedly geared towards peoples’ development, but makes no mention of how it is going to increase the capacities, especially at the frontline, to improve responsiveness. The vision of no growth in public sector employment completely ignores the reality of the massive vacancies in all public-sector departments. Lakhs of shortages of school teachers, of district and block education offices, of police at the street level, of health workers in the public health sector etc., are all deterrents to a responsive government.

Can they all be replaced by automation and artificial intelligence, another thrust area of this government? Where will the skills for operating AI come from, that too at the scale required to make the bureaucracy responsive down to the level of the people? Are we seeing here again a vision that is based more on delusion than reality – the reality especially of the people that this vision is meant to serve?

The question is: are the people going to be deluded by the sops provided and ignore the lack of coherence in the vision?

In his closing remarks, Piyush Goyal said that the roadmap made the government’s intent (niyat), policies (niti) and determination (nishthaa) clean (saaf), clear (sparsh) and consistent (atal). The intent and determination may be there, but the policies are neither clean, clear nor consistent.