It is high time that the state uses the opportunities opened by the influx of offline and online technologies to reach the poorest of the poor with high quality education. 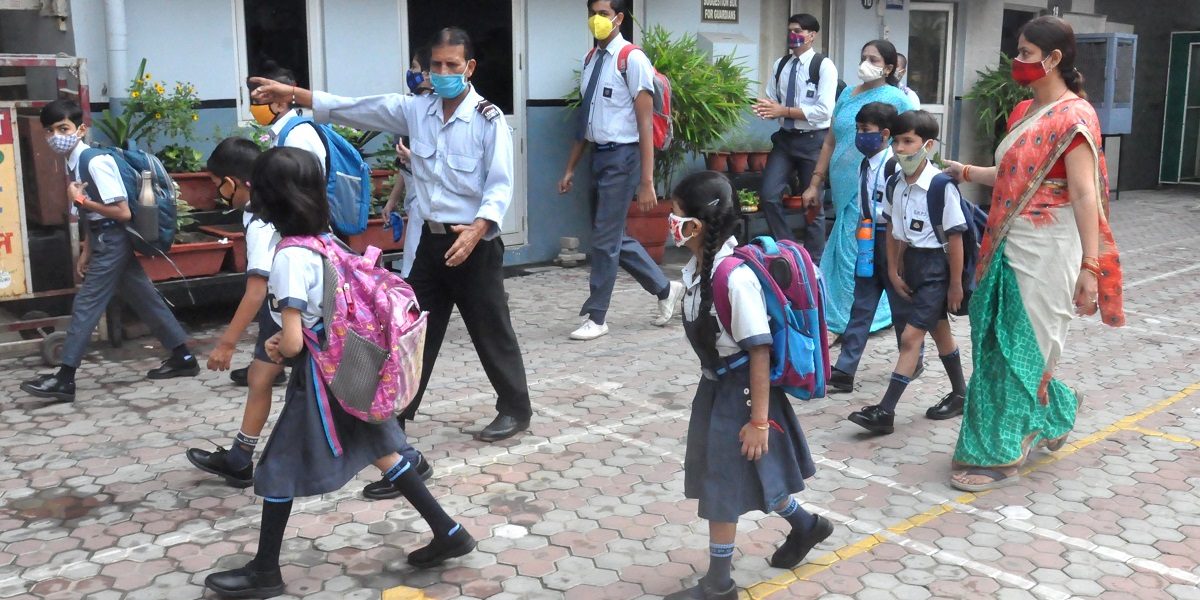 Students arrive to attend classes at a school that was reopened after COVID-19 restrictions were eased in Moradabad, September 1, 2021. Photo: PTI

“Mein tumari teacher hum, mera kam tumhari soch ko parivartit karna nahi, tumhe jitana hai (I am your teacher. My job is not to transform your thoughts. Instead, my job is to make you win),” a ‘teacher’ who trains students for competitive exams declares in the advertisement of an online teaching company during a commercial break of a cricket match. In other advertisements, television ‘teachers’ prompted students to learn coding, create ‘amazing things’ and study in ‘great’ universities without leaving the comforts of home and work. The Indian education landscape is being dramatically re-shaped by the ed-tech companies, posing new challenges.

In the feudal pasts of India, everyone could not access education as society was divided across class and caste lines. As a result, individuals were never allowed to prosper as caste groups, set in a perennial hierarchy, took root. While knowledge flowed to the groups on top of the pyramid, the lower rungs of the pyramid were left in the lurch of state apathy. Lower castes and classes faced oppression and rejection even many decades after independence. It is still a reality as numerous instances including that of Rohith Vemula exemplified. However, will the online revolution in education change all that and create a level playing field? It looks highly unlikely and, worse, the online education may worsen the inequality gap.

The COVID-19 pandemic has had a tremendous impact on education across the globe and India is no different. While it locked down millions of kids at home and made their lives miserable, it also created opportunities for the online educators. As schools and universities were forced to shut down and moved fully online, the poorest of the poor with no access to smart phones or internet were literally left in the lurch. The middle class, worried about their children’s future, ensured that online education is provided by the private schools and colleges.

At the same time, given the COVID-19-induced digital acceleration, an industry of online teaching, famously called as ed-tech, also prospered – mostly focussing on the urban middle class. The private online education market was valued roughly at Rs 39 billion in 2018 and expected to reach around Rs 360 million by 2024. Whilst the ed-tech industry is booming, the significant gap in the access of education between urban and rural and amongst different income classes persists. In India, where the modern socio-economic class and traditional caste hierarchies are omnipresent, attempts at mass education has only been partially successful. Education in the form of a billion-dollar ed-tech industry brings no relief either, as a large number of people belonging to the disadvantaged groups would find access to such spaces difficult if not impossible.

At the same time, the ed-tech industry has always been predatory in its nature. Recently, MP Karti Chidambaram correctly pointed out in his address in the Lok Sabha, “these companies are engaging in predatory marketing practices where they prey upon the parents who want to give their children a better education, who want to supplement their education which they are not getting in government schools.” One may need to, however, see how many poor students from government schools are accessing such facilities. It is clear that the middle- and upper-class students are whom the ed-tech industry largely targets.

Further, suggesting regulatory intervention to reign in the ed-tech monopoly over the future of an aspiring young generation, Chidambaram said, “Today, there are online educational companies which are worth billions of dollars. Some of them are worth even more than the entire educational budget of India. These companies offer online courses which are not vetted by anybody.”

While the quality and the predatory-capitalist nature of the ed-tech industry thrives unhindered, a larger question pertaining to the purpose of education is often not understood properly. Immanuel Kant, the German philosopher of Enlightenment, wrote in his famous essay What is Enlightenment? (1784), “Enlightenment is man’s release from his self-incurred tutelage.” Kant urged people to follow the motto of enlightenment – “Sapere aude!” The Kantian thesis of why Enlightenment is often stopped is now playing out unashamed, openly, before us. As the industry leading unsuspecting students to their eternal tutelage for money is ‘cool’ news, Kafkaesque horror stories are emerging from institutions that are blind to human struggle.

Is education the way forward? Yes, it is, indeed, as one of the key factors of development.

Nevertheless, in reality, many members of the lower castes in India have difficulties accessing education wherein the caste hierarchy acts as a barrier. Knowledge can transform a society, but only if it is of high quality and is universal: people of all classes, genders, castes, religions and regions must have free access to it. More importantly, education should create thought leaders and innovators and not merely produce job seekers or aspirants of medical/engineering courses. One of the purposes of education is to make people cognisant of the social realities around them and to recognise their own prejudices. This allows them to empathise, understand and respect other points of view and engage in a meaningful debate with the society as a whole. As a result, a more complex and inclusive society will be created. India’s own independence and the birth of a constitution and a democratic state was an attempt to achieve this goal.

India before liberalisation in 1992 focused on building a few high-quality higher education institutions for the elites, while largely ignoring basic and universal education. India after 1992, however, left the education scenario more to the private players and allowed both the elite institutions and basic education systems to wither away. That process was further streamlined in the last few years. The private elite institutions catered to the erstwhile and new elites as the ordinary masses still struggled to access basic quality education. Instead of filling the gap, ed-tech only widens the gap between the rich and the poor, the lower castes and the upper castes.

The liberalised education system and its philosophy seem to lack imagination and focuses only on generating income from the middle classes and castes. This meant that education was understood as ‘skill development’ rather than a system to create thinking individuals with the potential of changing the fabric of the society. While the National Education Policy boldly declares an imaginative and creative education system as a goal and places thinking above rote learning, whether this is a serious goal or not remains to be seen. The spurt of online education, especially in the wake of the pandemic-induced lockdowns, coupled with the anxieties of parents about the future of their wards’ educational future, still did not lead to a universal online educational revolution as such.

On the contrary, it merely exploits the very same ancient prejudices that turned Indians from innovators and debaters to mere mindless followers of rules – this time with the addition of the flashy predatory capitalists in the mix. The ‘babus and clerks’ mindset of the colonial era is re-branded for the Indian middle and upper classes/castes in an unhindered online market place.

For India to become a knowledge superpower, Vishwaguru, as the government terms it often, India needs to take education to the lower castes and classes. India’s marginalised groups can infuse new imagination and creativity into what is otherwise stale and repetitive modes of learning of the middle classes and upper castes. Just like vaccinating poorer states is vital to the COVID-19 recovery, taking education to lower caste and classes is vital to achieve the state of Vishwaguru. And that education has to be of good quality under the initiative of the state. Educating India as a whole requires educating everyone together.

It is high time that the state wakes up from its eternal slumber and use the opportunities opened by the influx of offline and online technologies to reach the poorest of the poor with high quality education that does not make the students think of themselves as what Macaulay wanted Indians learning English to: “a class of persons, Indian in blood and colour, but English in taste, in opinions, in morals, and in intellect”. While English education is absolutely vital, it cannot be restricted only to a few sections of society and this has to be taught with new confidence. Once the lower classes access new modes of creative education, India’s education landscape will be truly transformed. Only the empowered and enlightened individuals will be able to think beyond caste groups and feudal morals of life and society and thus can bring true development.

Also read: With IIT Kharagpur Calendar, the Hindutva Right Takes Another Step Away From Science

The education system is too risky to be left to the private players alone. There is no society that managed to develop itself without educating the masses. The new online opportunities must be used to their full potential in order to up-skill and help the poorest of the poor with the intention of bringing them to the mainstream along with regulations. India can take the recent example of China that has brought regulations as far as the ed-tech industry is concerned. In the absence of a proper regulatory framework and an imaginative and inclusive approach, the new opportunities available today will also bypass the rural poor as many other opportunities before. This will be a great tragedy for an aspiring nation like India which is at the cusp of a global resurgence.