India should steer clear of an education plan which is driven less by the needs of the country and more by the requirements of big capital.

I have not found time yet to plough through the draft National Education Policy formulated by the committee headed by eminent astrophysicist Krishnaswamy Kasturirangan. But misgivings about it have appeared in the press and there have been murmurs of disquiet from noted educationists.

There also seems to be suspicion that at the behest of the Centre, this policy is soon going to spawn a rapid-action plan to effect a total makeover of the structure and orientation of the country’s education.

Such a plan may be driven less by the needs of the country and more by the requirements of big capital and by a sense of lagging behind in mapping, mopping up and recycling resources for profit.

The wholesale replication of the US model, which is considered to be the unfailing standard of excellence, in a situation historically so very different and socially burdened with unique problems is quite likely to prove disastrous to education – and a nightmare for both teachers and students.

The haste is bound to result in mismatches, logjams and appalling waste. The expectation that digital programme building and accelerated movement of information will forestall such risks is unfounded as the basic approach to education itself does not appear properly thought out.

The Kothari Commission (or the 1964 National Education Commission), headed by another renowned scientist of his time, Daulat Singh Kothari, and equipped and organised by leading educationist M.K. Naik, had a dozen or more specialists from different fields. One hundred educationists from all over the world including those from United States, Latin America and the Soviet Union were consulted.

That report combined the imperatives of democracy, the challenge of science in a tradition-bound society, the importance of awakening the masses to participate in the country’s development, and the urgency for broadening the meaning of education and turning it into a lifelong pursuit.

For example, it demanded from the teacher, not only a devotion to studies but also the conscious execution of the role of a fearless examiner and critic of public policies and programmes. It recognised the dangers of over-specialisation and bookish learning and sought to instil in the educated, a concern for fellow humans. It saw the teacher more as a facilitator in the learning process rather than a fountainhead of unchanging truths.

The government failed that vision simply because political leaders failed to appreciate its sane lessons. What they did was administer the report to numerous tinkerings, resulting in the bifurcation of the higher secondary stage and college, varying periods earmarked for graduation and the imposition of degrees as a mark of teachers’ research. There was no interest in monitoring and taking stock. 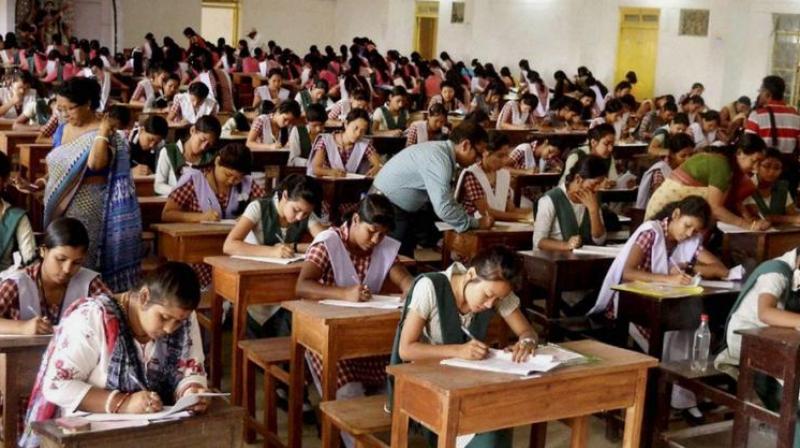 Rote learning makes sense if one is allowed and encouraged to ask and raise questions. Photo: PTI

The Sarva Shiksha Abhiyan was a product of another experimental approach fathered by Rajiv Gandhi’s education policy. Its effectiveness can be measured in terms of a 2012 countrywide survey that reflected the inability of Class Vl students to read a Class II textbook and their failure to do multiplication and division sums taught three classes below. The Abhiyan has proven to be yet another wasteful bonanza that has benefitted contractors more than students.

One terrible blind spot in such rapid see-saws of policy has been the utter disregard for matching goals with adequate resources. No one has kept an eye on the degree of success of newly introduced programmes of study.

These days, the semester system is considered sacred. English is a common language for all streams in a college with 500 to 800 students in Guwahati. So there would be seven or eight teachers coping with all of them from higher secondary to the Masters level.

They have to take and score several tests during one semester and are naturally always busy.

Rote learning, of late from Google, takes over. In addition, teachers are mired in clerical work of keeping records of students’ attendance, assessments and records of alumni. They also have to answer heaps of questionnaires which seem designed to catch them napping.

Thus teachers find little time to study. Since policy says no student can be detained, they have to hold additional tests to enable the slower learners to catch up. Rather than take on additional workload, they pass them all, with predictable results. In any case, the maintenance of quality is ruled out.

Such waste is sure to be duplicated unless at every stage appropriate resources are allocated to fulfil proposed objectives and careful monitoring is in place. Consider the much-hyped choice-based curriculum.

Suppose a student opts for chemistry along with history and English. What can guarantee that she or he has received a strong enough background in chemistry at school to provide safe passage to college-level chemistry? Did her or his school have a laboratory worth the name? Otherwise she or he is bound to have an unhappy experience.

No scope for independent thinking

Rote learning makes sense if one is allowed and encouraged to ask and raise questions. Such an environment fosters curiosity and invention. But do we really value such questions? A circular has recently been issued to college teachers by the Directorate of Higher Education, warning them of serious disciplinary steps if they write any article on any newspaper or magazine, criticising official public policies and programmes. So much for academic freedom.

So why will teachers waste time encouraging independent thinking when bureaucracy rules the roost?

The Kasturirangan Committee appears to have been in a hurry to prepare the country for the next knowledge revolution. The anxiety should be to avoid the ghastly waste of human resources, extremely lopsided growth and the failure to raise an army of highly skilled technicians ready to accomplish the tasks set for the next generation.

All of this is in recognition of the fact that the private sector in education will be flush with funds. Privatisation necessarily follows a utilitarian bias and seeks to meet the demand for trained professionals for the accumulation of profit. As a result, the true national goal gets dropped by the wayside.