Did Events Unfold in JNU as a Well-Scripted Plot? 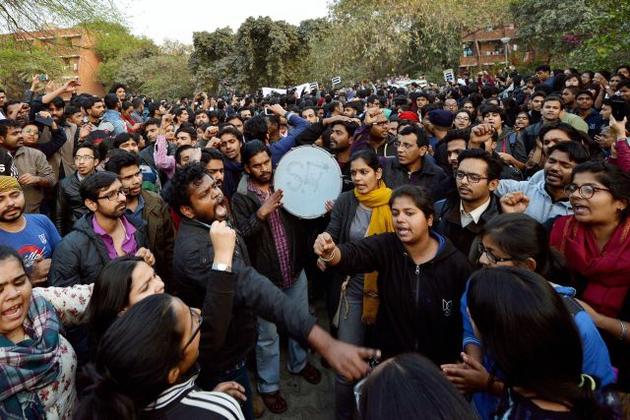 “A University stands for humanism. For tolerance, for reason, for the adventure of ideas and for the search of truth. It stands for the onward march of the human race towards ever higher objectives. If the Universities discharge their duties adequately, then it is well with the Nation and the People.”

Jawaharlal Nehru University (JNU), ever since its inception, has steadfastly stood by these words of the first prime minister of India, not out of any reverence but for the sheer philosophical relevance of the statement. Today, as it appears, the university’s openness towards the very adventure of ideas, has suddenly made the entire JNU community a victim of attack, abuse and the rage of the regime.

A cultural evening, organized by a tiny students outfit in the campus (DSU, Democratic Students Union) with practically no electoral support base in the illustrious history of the university’s student body elections, ipso facto, along with the ABVP (the student wing of RSS) have played the crucial role in generating the desired controversy and subsequently attracting serious clampdown – on behalf of the state – on the university’s autonomy. For it was the unprecedented unity among the university students across India, on Rohith Vemula’s institutional murder that was making the current establishment desperately seek a diversionary tactic that would not only weaken the country wide movement but also bring students’ mobilisations per se, a bad name. DSU ‘s cultural evening to mark the hanging of Afzal Guru on Feb. 9, helped the ABVP and their political leaders, much under attack in Rohith Vemula case, with that opportune moment they were eagerly waiting for.

When, at the eleventh hour, the university administration withdrew the permission for a programme to mark the hanging of Afzal Guru, (because ABVP had warned the administration of possible violence in the event of any such programme), the organizers went ahead without the sound system.

The sloganeering of the ABVP protestors on Kashmir (saara ka saara Kashmir hamara hai / the whole of Kashmir is ours) resulted in counter sloganeering from the organizers (Kashmiri kya chahte hai? Azadi/ What do the people of Kashmir want? Freedom).

There are several eye witness accounts of what happened but most agree that JNUSU and its president Kanhaiya Kumar were not among the organizers; in fact, they tried to avoid any possible confrontation. Members of JNUSU have claimed that on hearing some anti-India sloganeering they tried to connect the ‘azadi’ (freedom) part with social issues like gender, patriarchy and freedom of speech and they instead started giving slogans like “Kerala se Kashmir tak Aurat kya chahe? Azadi ; Humen kya chahiye? bolne ki azadi; (What do all women from Kerala to Kashmir want? Freedom, freedom from patriarchy; what do we all want? Freedom of speech ).

Thus JNUSU could diffuse a potential conflict scenario between DSU and ABVP (both responsible for some very aggressive sloganeering) because of which the gathering could disperse without any single act of violence). It speaks volumes of the time-tested JNU tradition of never indulging in physical violence, even on matters of grave disagreements. ‘Contesting ideas with counter ideas’ has all along been the unique feature of the JNU political culture of debate and dissent. It is this culture of democratic dialogue that trains every single of its alumnus to respect differences of opinion, leading to the most cherished democratic value of coexistence of diverse political ideas and worldviews.

But the quick succession of events that followed this incident was nothing short of a well-scripted plot that shocked the teaching community. Just as we were getting assured by the statements of JNUSU president, his arrest under a sedition law framed by the British in the colonial era made us sit up and realize that there was a much bigger plot that was unfolding in front of our eyes.

The relentless cycle of “breaking news” on some television channels managed to create public hysteria against JNU in no time. The ABVP’s demand for the expulsion of JNUSU members was nothing but a replay of what happened in the case Rohith Vemula and four others in Hyderabad University; BJP MPs filing FIR against unnamed JNU students on charges of ‘anti-national’ activities, and Delhi Police’s swinging into action swiftyly by entering the campus and picking up the JNUSU president; it all happened swiftly and systematically. Social media then went into overdrive and the hashtag ShutdownJNU began to trend; a larger pattern began to emerge.

The arrest of the JNUSU president despite his television interviews where he had condemned the anti India-slogans while reiterating JNUSU’s firm faith in the values enshrined in the Indian constitution, along with the relentless new charges that are heaved upon JNU on the alleged links of terrorist organizations like Lashkar e Taiba, in all likelihood, are indicative of a well-planned campaign to seriously harm the reputation and credibility of this university, a institution that has been ranked first by the government’s own National Academic Accreditation Council of India.

For JNU, earning the international reputation of being the most important site of knowledge creation on modern Indian democracy was possible only through a zealous guarding of its autonomy, the autonomy of its critical intellectual space. The university is has all along nurtured diversity of thoughts, ideas and practice and preserved a culture of democratic dialogue and dissent. This tradition that always has troubled the hard core right-wing ideologues in the country.